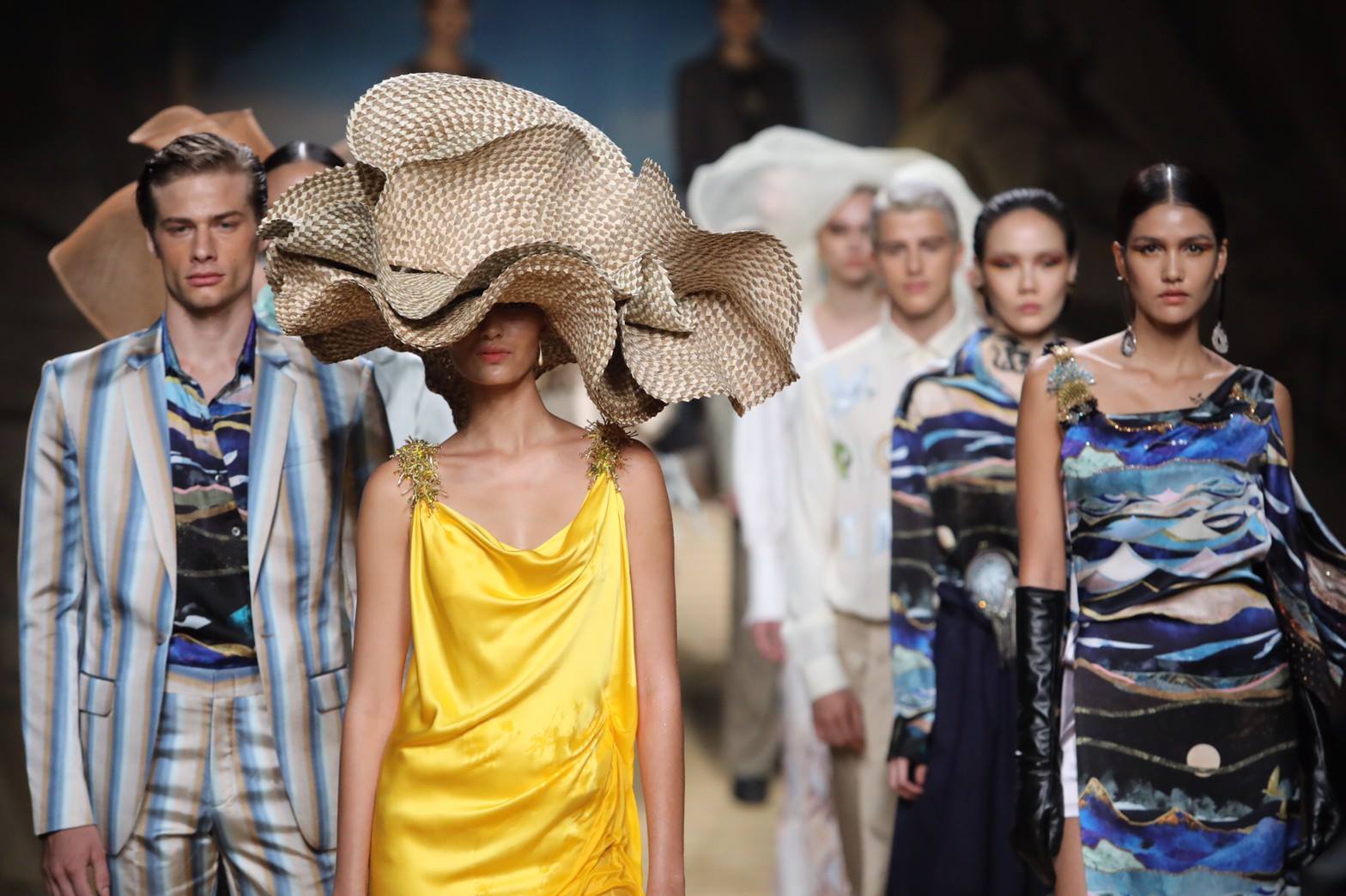 A glittery storm of high heels, camera flashes, and perfect jaw-lines, Bangkok International Fashion Week 2019 has come and gone before you’d even finished saying its name. Over the four days, the city celebrated 15 incredibly talented designers, 10 eye-opening shows, and thousands of killer outfits both on and off the runway. So, is it really so bad if we’re already feeling a little nostalgic about all the glitz and glamour? Either way, we’ve already gone back to reflect on all the shows this year and picked out some of our favourite moments. And to celebrate its 12th year running, we’ve decided to go Oscars style and award 12 ‘Best’s from the shows and events of BIFW2019. From ‘Best Set Design’ to ‘Best Model’, here are 12 winning highlights from Bangkok International Fashion week 2019.

No show last week had more fingers pointing or sly smiles cracking than Pichita‘s on Sunday. It was all down to a subtle but irreverent gimmick: for the show’s wild desert theme presenting a collection titled ‘The Golden Hour’, the models strutted down the sandy catwalk with handbags that were leaking sand through small holes at the bottom. (What did you think when we said sandbags?) Beautifully trickling down like streamers, the feature fitted brilliantly with the long silhouettes of the clothes as well as the rocky theme. A truly golden little detail.

Colour palettes can be underestimated when it comes to presenting a fashion collection. Those with coherent and consistent themes tend to be more memorable, more appealing, and more approachable. So that’s precisely why P.Mith‘s show on Friday was such a success. With their recurrent mixing and matching between bold yellows and more muted neutrals like beige and grey, P.Mith showed a collection with distinctive character, an acute sense of style, and an artistic modern vision.

Interviewing them a couple of weeks back, we were told that we’d only understand why Han Chong (Self-Portrait) and Vatanika titled their collection ‘After the Lovers‘. It left us all sleepless in suspense, but now we’ve seen their show which opened Fashion Week on Thursday, we’re ready to do some real analysis. The runway was split down the middle by a long and tall mirror, so while models walked on both sides, the audience on either side could only see the one model and their reflection on their own side. Sound confusing? Don’t worry – the theory is that maybe (and we’re taking a shot in the dark here) showing the audience two identical figures (one of them a reflection) is like showing two lovers becoming one? Scratch that, we have no idea. It was a really cool set anyway.

Can any fashion brand compete with Issue‘s masterful ownership of graphic and logo prints? We think not. Always bursting with daring colour, Issue’s adaptation of the conventionally boring blazer is a sartorial gift to us all. There were a fair few variations, but what was consistent was the signature flamboyance, though always without the vulgarity. The blazers seen at Thursday’s show were bold, brash, and fun. We’ll take the lot.

On the Visionary Atrium stage at Siam Centre, fashion graduates presented their work for the first time ever. Out of all the brilliant and fresh new designs that strutted into the light last week, two collections presented by students from Srinakarinwirot University stood out most with their mature yet youthfully-minded take on Thai heritage fabrics. With impressive vision and technical skills, the students managed to interpret traditional weaved textiles from Lopburi into more urban wear. There’s also a nostalgia in their colour palettes which feeds into a trendily retro 90s aesthetic – irresistible to any fashionable millennial.

If neither Prapakas‘s eclectic and characterful outfits, nor the outrageous detachable moustaches were entertaining enough, then perhaps the heart-warming as well as contagious dance routine managed to put a smile on your face. There were smiles aplenty on all the models who walked the show at least, and that’s always refreshing to see. Isn’t fashion supposed to be fun, after all?

She’s one of the most in-demand Thai models for a good reason. Aside from her flawless genetic architecture, Miss Mosimann also possesses a truly professional and well-spirited character. This was really put to the test in the Pichita show, in which Matcha deserves huge respect for somehow managing to walk so gracefully down a steep ramp and a sandy runway while wearing not only stiletto heels, but also a vision-obstructing headpiece which was dripping water down her floor length dress. No big deal? We haven’t finished: near the end of the runway, one of the model’s shoes slipped off. So, since bending down to put it back on was completely out of the question, Matcha simply put on a sneaky smile and did the rest of the walk with the shoe in her hand as if coolly strolling along the beach. A real trooper.

A brazen creation of the talented contemporary designer Kanapot Aunsorn, this rich, alluring, spicy feather dress brings together ritzy sensuousness and classy elegance. Wearing beautiful hair jewellery, Sammy Cowell supremely modelled the dress and added to it her personal air of fierceness. It is a masterfully crafted look that seems fit for a museum exhibition yet also ready to go for a night of dancing.

A special mention just has to go to the M.A.C. team who worked backstage all the way through the week to complete all the magnificent runway looks. For the Tube Gallery show, subtitled ‘More is More’, the M.A.C. crew had everyone in awe of this bold glitter eye look that suited the theme label pretty perfectly.

Our jaws were floored for Milin‘s floor-length evening dresses last Saturday. Designed with a purpose to make women feel special, these gowns were samples of the kind of creations Milin’s FRONT ROW, the brand’s exclusive made-to-order line, can offer. No matter how bold your choice of colour might be, or how extravagant your choice of fabric, Milin FRONT ROW’s show proved that they will always tailor the best out of any combination you throw at them.

Presenting an agile collection, the eclectic Fri27Nov moved amazingly dextrously between the funkiness of 80s disco colours and the Romanticism of men’s outfits that could make a grown woman swoon. The genius of the former category was that even though the colours might appear daringly vibrant and experimental, they’re actually quite approachable and surprisingly wearable. As for the second category, the key is in the balance between an irresistible sweet charm and a slightly dangerous bad-boy attitude. Gentlemen, please allow us to direct you to a Fri27Nov store.

Ok, so they had the pretty obvious advantage of being the closing show for the whole of Bangkok Fashion Week. But they didn’t disappoint did they? With show-stopping outfits, complete with monumental headpieces, Tube Gallery also featured the singer Gam Wichayanee as one of their models. She then of course broke into a fabulous song and dance at the show’s finish, ensuring everyone’s seamless move into the afterparty.