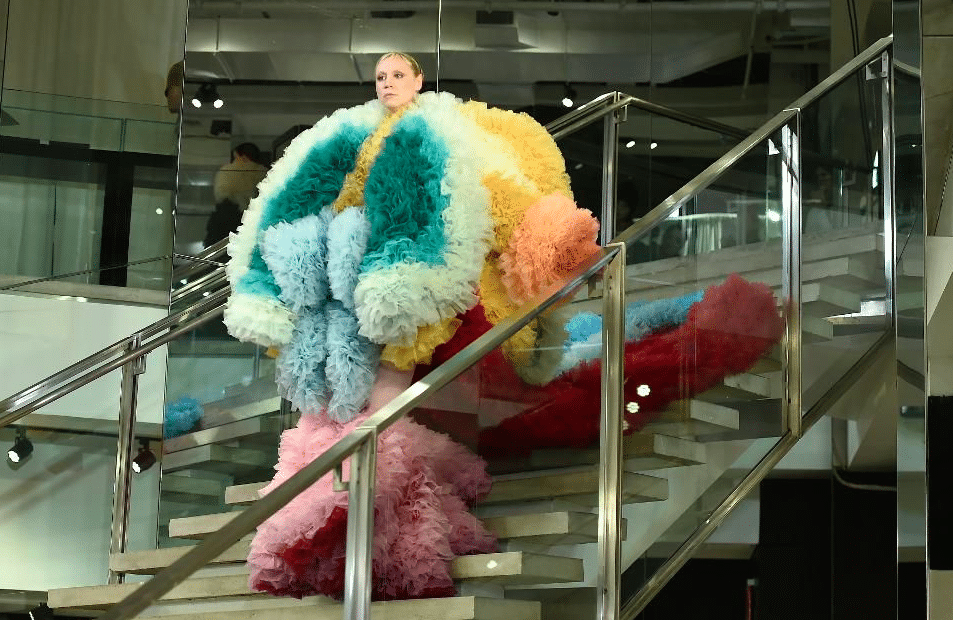 The weird and wonderful moments at New York Fashion Week 2019

New York Fashion Week 2019 wrapped up last weekend. But before we hop across the pond to feast our eyes on London‘s sartorial offerings, we’re looking back at some great moments on the New York runways. Designers already have to stand out to be featured at NYFW, but then there are the stand-outs from the stand-outs. Fashion week is for high fashion, and high fashion should catch your eye, then make you think. By being wonderfully weird and weirdly wonderful, the looks we’ve gathered below did exactly that.

The Weird: An unknown designer from Tokyo caught the eye of the right people on Instagram and was then made the talk of the town after his memorable debut. Koizumi’s larger-than-life dresses, crafted origami style from Japanese polyester organza, have previously been popular with Japanese pop stars. Lady Gaga also wore one when visiting Tokyo in 2016. But it was only after this mad, dreamlike show that Koizumi’s name began to reverberate through the streets and minds of the wider public.

The Wonderful: Fashion is hungry for something absolutely crazy and fantastical, and that’s exactly what Koizumi is serving up. The whole show was a surreal event, with familiar faces such as Bella Hadid gliding impossibly up and down a flight of stairs in sky-high heels and cascading ruffles. In a stale market full of fast and predictable ready-to-wear, Koizumi offers sophisticated artisanship (he sews most of his dresses himself) and deliciously deviant design.

It’s fashion going to the dogs.

The Weird: Another barking mad moment at NYFW was when Lela Rose put on a ‘Roseminster Dog Show’ to present her Fall 2019 collection. Each model would stroll along the runway walking a dog while presenters Robert Verdi and Jenna Bush Herdi announced categories like ‘Lassies who Lunch’ and ‘Cocktail Companion Group’.

The Wonderful: Is this taking runway diversity to a whole new level? Casting was held for the hounds as well as the models, and the clothes themselves were partly inspired by dogs. Many of the dresses, suits, and coats featured prints of dog silhouettes, while the dogs themselves also contributed to the overall look. The poodle matched with an elegant black and white cocktail dress while a corgi completed the Brit-inspired plaid coat outfit. And while it may not have actually been about diversity, the inclusion of dogs was sincere: Lela Rose announced that a portion of its proceeds will be donated to the ASPCA to help animals in need.

The Weird: The young London designer teamed up with shoes guru Giuseppe Zanotti and they came out with watch-inspired shoes. The designers were interested in online culture and the modern ‘break the internet’ mentality and set out with bright neon and unusual material combinations to create their Fall 2019 collection. Full of colour and energy, Cowan’s collection is based on the club scene of his hometown.

The Wonderful: The designer had previously caught the attention of celebrities including Cardi B and Kim Kardashian West, who have already expressed their love for these green watch shoes. The teamwork between the 23 year-old designer and the established Zanotti is a prime example of the impactful synergy between fresh, fearless ideas and industry experience.

The Wonderful: Alessandro Trincone is known for creating daring genderless looks and using exaggerated silhouettes to challenge preconceptions about masculinity. Billed as a men’s line, his collection brings sensitivity and delicate finery into the forefront, therefore brilliantly breaking the boundaries of gender distinctions. In an age where many definitions are becoming more and more fluid, Trincone scores big points for taking fashion up to speed.

The Weird: If a party was thrown at Stonehenge and then drawn by Dr. Seuss, it would look like Christopher John Rogers’s AW19 collection. At least these were his actual words when asked what his aim was behind the designs. Set out to show that fashion shouldn’t take itself too seriously, Rogers presented over-the-top gowns in ruffles, tiers, mixed prints along with big tulle hoop skirts and hand-painted corset bodices.

The Wonderful: Although they were in the name of fun, the outrageously fabulous designs were also references to mid-century debutante balls and neolithic architecture. Rogers and his team sew the outfits themselves while also working full-time at Diane Von Furstenburg. He might be known for his sense of humour, but this time he was also determined to show himself as a serious contender in the fashion world.

The Weird: Who expected to see King T’Challa’s United Nation’s uniform from the final scenes of Black Panther on the runway at New York Fashion Week? What about the ‘killer-diller’ Malcolm X Zoot suit? Or the sparkly mini dresses from What’s Love Got To Do With It? No, neither did we.

The Wonderful: Harlem’s Fashion Row had teamed up with IMG in this special Next of Kin’ show. The event was a celebration of work by Ruth E. Carter, the award-winning designer behind many iconic costumes including those used in Malcolm X, Roots, and Black Panther. Merging film and fashion, the fashion show-exhibition displayed what the two industries have in common: art. Models paraded in outlandish but artistic pieces straight from Carter’s archive, styled by Ibrahim Kamara. It was a show that was all at once avant-garde and historical.