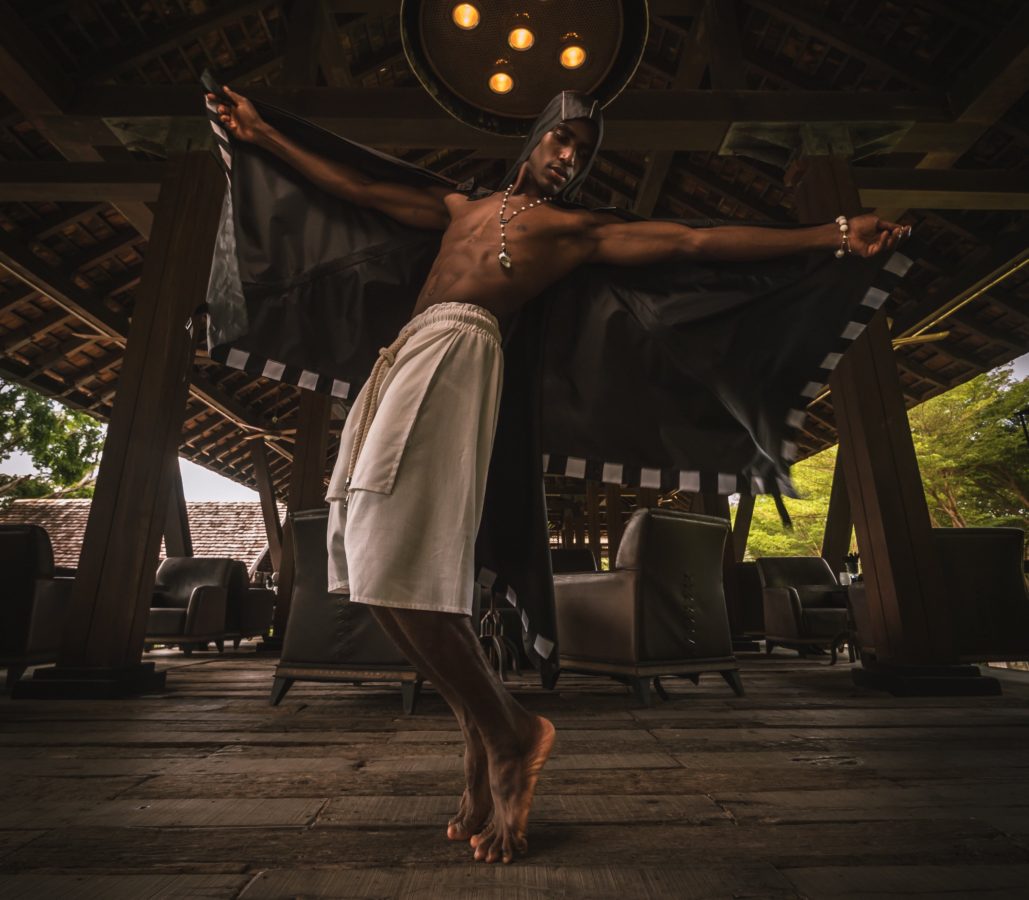 Whilst we know hotel stays can be absolutely rejuvenating, it isn’t often that you hear about a British streetwear designer becoming so inspired that he designs a whole collection around his stay. Nevertheless, such was the case with The Slate Phuket and London label This is Fred.

Have you ever stayed in a place and loved it so much you wished you could wear it? We imagine Frederick ‘Fred’ Morrison to have had this thought on his trip to Phuket pre-pandemic, as the designer has released an exclusive line of streetwear items that draw on various elements of The Slate Phuket.

Featuring artful and architectural elements instilled and installed by the world-renowned Bill Bensley, The Slate is definitely one of the most avant-garde properties in Phuket. From industrial inspirations to a deeply-rooted story, we recently visited The Slate Phuket to get a closer look at both the hotel and the collection. Here are five observations we made.

[All images courtesy of The Slate]

5 things we love about The Slate Phuket x Fred collab 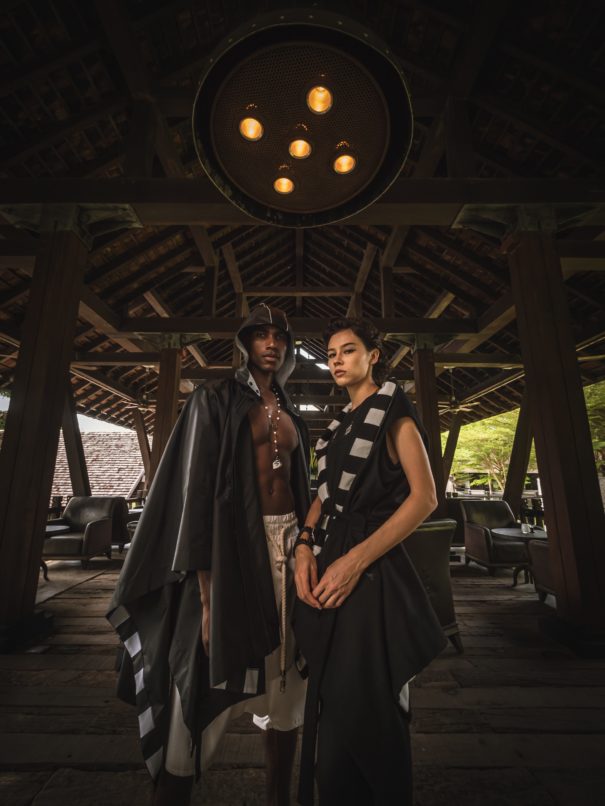 The Slate Phuket aims to reflect Phuket’s rich industrial heritage, drawing particularly on the mining history of the island. Owners of The Slate, the Na Ranong family was involved in this business, and used this heritage as the influence for a lot of the hotel’s design elements.

One of the first things guests will note at The Slate is how dark it is. Whether you try the award-winning Thai food at Black Ginger, or you’re just lounging in the massive and imposing chairs at Rebar, there is a lot of dark wood and metal everywhere you look. Tin sculptures dot the gardens and the ceilings, and antique items from the family’s very own home can be found at unsuspecting corners. There’s a sense of trance and mystery, which is certainly not for everyone, but as hospitality magnate and all-round power woman ‘Moo’ Prakaikaew Na Ranong rightfully explains, it’s not meant to be for everyone. Appreciation for design can be exclusive that way.

Travel
The beach is calling: 5 reasons why you should revisit The Slate Phuket

It’s an appropriate and utterly fitting statement to admire now in 2021, but when The Slate first opened years ago (back then as Indigo Pearl), it was a progressive and wildly modernistic ethos for a Thai hotel to embody. Design hotels were hardly in existence, and while everyone is looking for the next big thing to ‘gram now, back then it was truly forward-thinking. For reference: Instagram was launched in 2010 and Indigo Pearl opened in 2008.

This is Fred follows a similar forward-thinking attitude. The Slate x Fred was very obviously inspired by the hotel’s design with its black and white stripes, monochromatism, and structure, and thereby pays homage to the property and its history. However, it also pulls together a few key elements that could be considered modernistic in the fashion world now too: gender fluidity, sustainability, and versatility. It’s difficult to think of streetwear as versatile or even timeless, but in practice, we found Fred’s items to work very well across gender, size, and occasion. As the world strives towards a diminishing of limits in fashion, This is Fred acknowledges this beautifully.

The collection comprises of trousers, tops, ponchos, and jackets, and comes in a black and white colour scheme (with the signature black and white stripes found on almost every item). Where black and white are arguably the most timeless colours of all, they are also appreciated by all genders and all sizes. Furthermore, the items are crafted as sustainably as possible, and yet don’t come with the often very high price tag that accompanies other eco-friendly fashion items. Having said that, it’s also a sweet way to prove that an item need not be overly expensive to last you a long time. 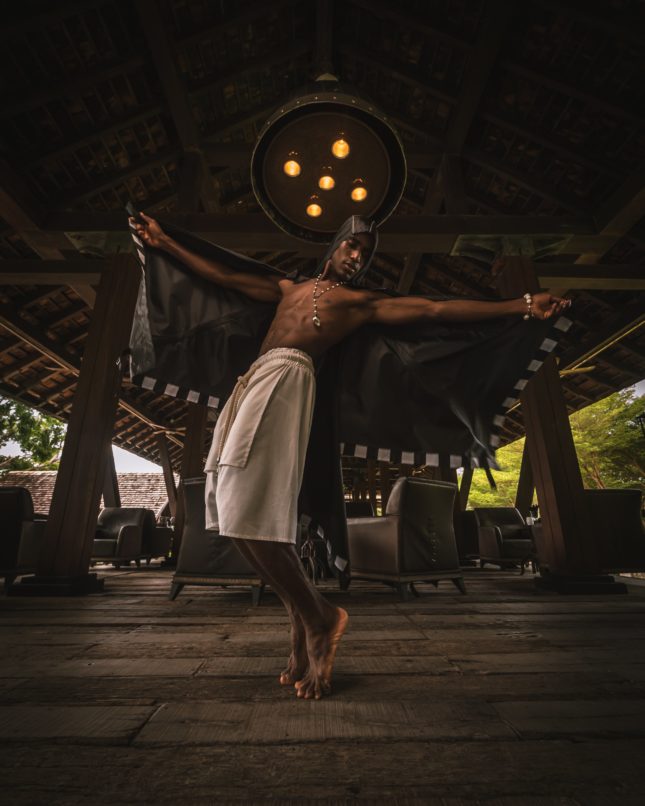 It’s also a collection with a personal touch

In conversation with ‘Moo’ Prakaikaew, we came to find that This is Fred is her very own discovery. Strolling in London’s trendy cool cat haven of Shoreditch, she came across Fred’s store through sheer happenstance. Chatting with the designer (and, we imagine, purchasing quite a few items), she invited Fred to visit her hotel in Phuket. A collaboration was never part of the invite, but as friendship and sudden strikes of inspiration would have it, The Slate x Fred came into being.

This kind of harmony is a great way to see the collection, as we were honestly expecting a hotel-inspired line to look more like resort wear. The Slate x Fred is not resort wear. It lies somewhere between wearable architecture (it’s a thing), and character in motion. It’s eclectic and dynamic, and an organic evolution of a harmony between friends, and from structure to fabric. 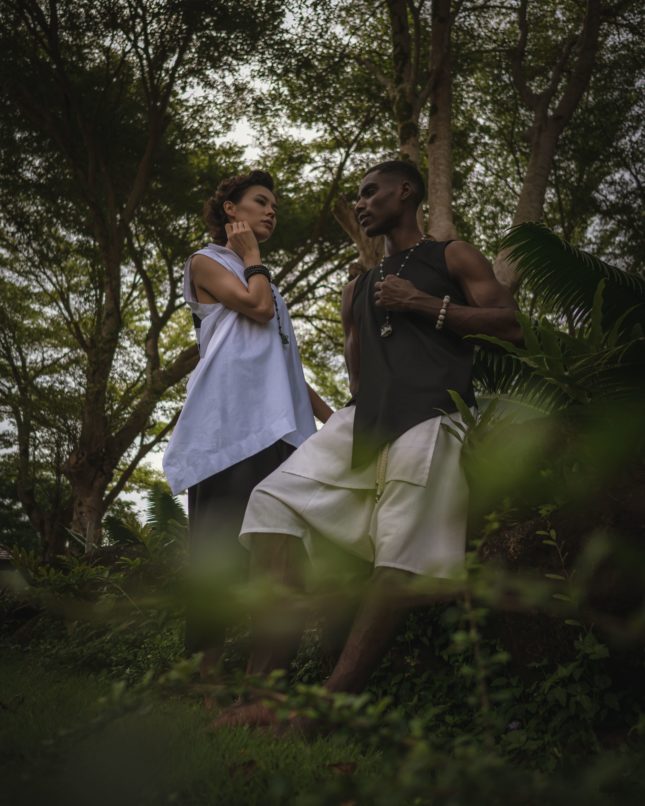 What do Phuket and Shoreditch have in common?

Fred Morrison has shown his collections at Berlin and Paris fashion weeks, working with big names like Rick Owens and Gareth Pugh before creating his own label. Nevertheless, his pieces look no less out of place from Shoreditch to Phuket. What do Phuket and Shoreditch have in common (beyond occasional heavy rain)?

The sartorial collaboration between The Slate and This is Fred is actually part of the hotel’s unique in-stay experiences, and its “Artist in Residence” programme. Blending design, art, and fashion, this programme aims to highlight the authenticity of Phuket and the art journey that can be enjoyed here. It’s a bit of a hidden gem, much like a lot of the happenings in Shoreditch itself.

The notion of a hidden gem works well for the collection, too. None of the pieces from The Slate x Fred scream “logomania” or “branding.” They’re edgy but also subtle. Thereby, we imagine, the kind of person who appreciates this kind of treasure trove find would also enjoy the hidden gem that is The Slate Phuket. Where to find The Slate x Fred

One of our favourite spots at The Slate Phuket is the gift shop, better known as The Stockroom. Here, guests can purchase anything from the in-room bathroom amenities over to the glasses at breakfast and even the standalone bath tub you can find on the terraces. This is also where you can purchase The Slate Phuket x Fred collection (as well as online).

As design lovers, of course, select items from the collection are also on display at The Shades Gallery within the hotel. Featuring an imposing centrepiece that hangs dramatically from the ceiling, it’s yet another spectacle that blurs the worlds between sense of place, sense of self, and sense for design.

Travel Fashion Phuket streetwear the slate Hotels & Resorts
You might also like ...
Travel
10 unmissable street food spots in Phuket (and what to order)
Travel
The most Instagrammable cafes in Phuket to bookmark right now
Living
Good Life Gurus: Bill Bensley, world-renowned hotel designer extraordinaire
Travel
Checking in: once upon a time in Keemala, Phuket’s mystical rainforest escape
Lisa Gries
Creative Content Director, Bangkok
Lisa loves to travel, and is always on the lookout for the world’s best nap spots. She’s a serious Asian art history nerd, and has a knack for languages and coffee table books. She hopes to publish her own novels one day, one of which will likely be called ‘All The Great Conversations I Had In A Bangkok Speakeasy.’ It’s a work in progress.
Travel Drinks Dining Watches

Year of the Tiger 2022: Gucci launches a roaring tiger collection