Actress Elizabeth Taylor is known as much for her movies as she is for her taste in jewels. The rarest diamonds, rubies and sapphires from some of the most iconic jewellers piqued her interest. But her relationship with Italian jewellery brand Bulgari is the stuff of legends. “I introduced Liz to beer, she introduced me to Bulgari,” husband Richard Burton famously quipped while filming ‘Cleopatra’ with Taylor in 1962.

It was during this time that in between takes and to escape the paparazzi, the Academy Award-winning actress would often visit Bulgari’s flagship Via Condotti boutique to try their exquisite pieces. With a love affair in full bloom, Burton showered Taylor with extravagant gifts, mostly jewels from their favourite maison.

Taylor, however, was also a true jewellery connoisseur, drawn not just to precious stones but craftsmanship too. Be it her emerald engagement ring, which popularly came to be known as the Taylor Burton fiancée ring, or the iconic diamond and emerald necklace she wore at her wedding, the pieces are testaments to Taylor’s discerning taste.

In 2011, her personal collection was acquired by Bulgari at an auction by Christie’s New York. It is, till date, one of the most valuable jewellery sales in history.

Here are some of the most exquisite Bulgari pieces once owned by Taylor, and the stories behind them.

Necklace in platinum with emeralds and diamonds, 1962 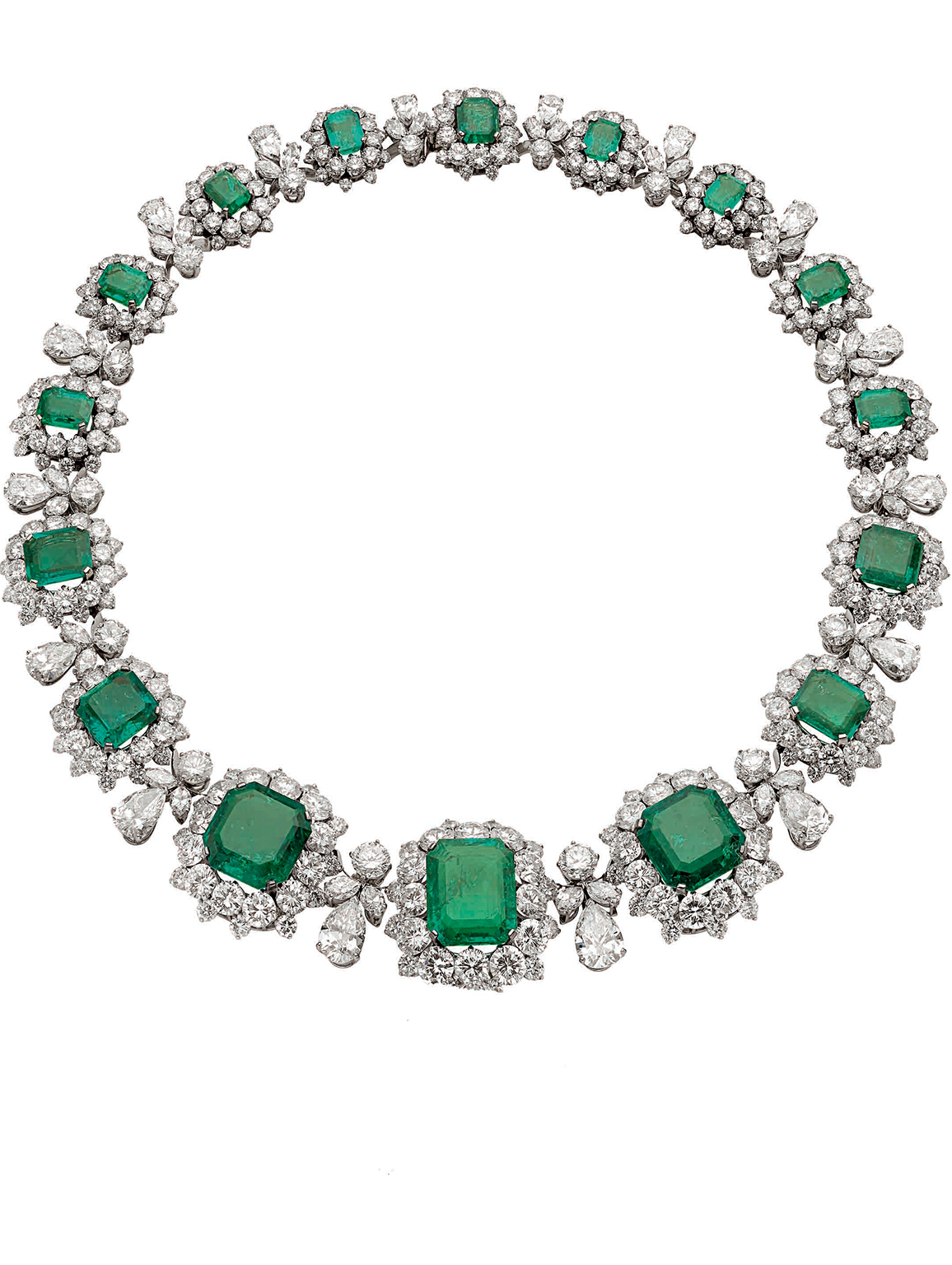 Bulgari necklace in platinum with emeralds and diamonds Mounted with 16 step-cut, octagonal Colombian emeralds for an estimated total of 60.50 carats, each in a surround of brilliant-cut and pear-shaped diamonds, this necklace is one of the most resplendent pieces Burton gifted Taylor at their wedding in 1964. The necklace gained fame in 1966, when Taylor wore it while receiving the best actress Oscar for ‘Who’s Afraid of Virginia Woolf’.

Tremblant brooch in platinum with emeralds and diamonds, 1960 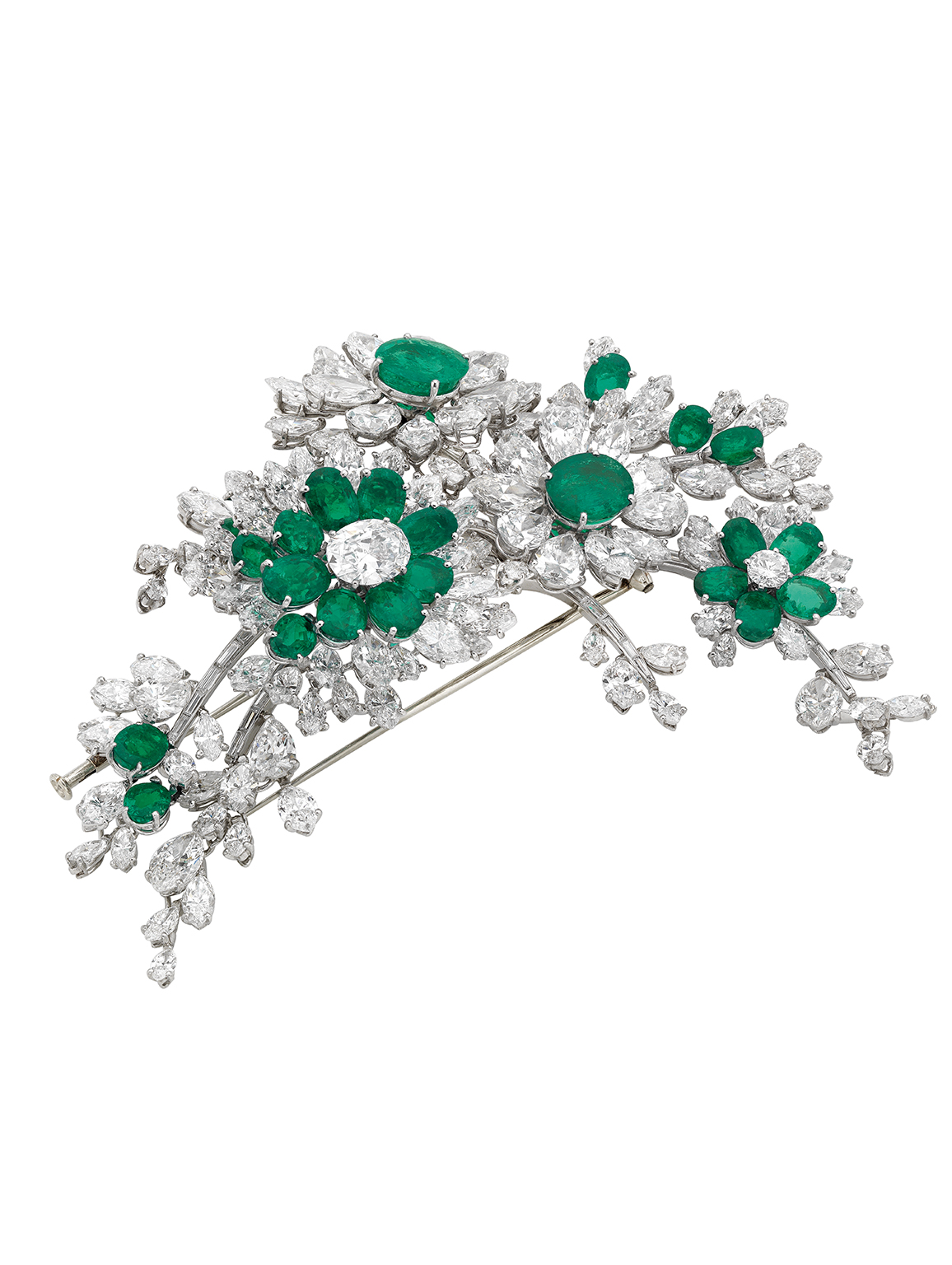 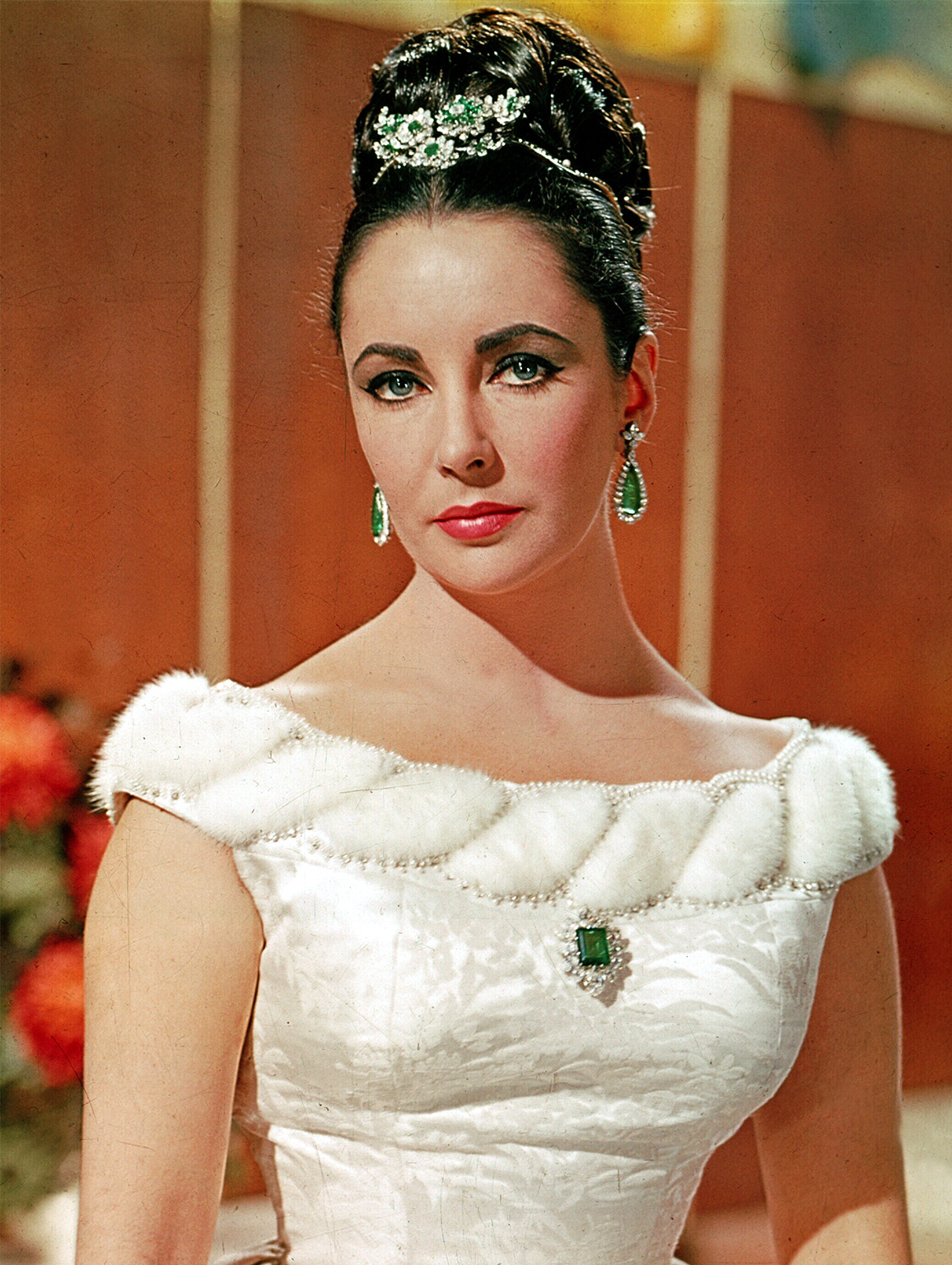 The brooch was probably gifted by Eddie Fisher to Taylor

An exquisite example of realistic floral motifs, the brooch was probably given to Taylor by Eddie Fisher, her husband at the time. On the Tremblant pieces, flowerheads are mounted on spring settings which allow them to ‘flicker’ or reflect light. Its setting and construction in the early 60s established Bulgari as one of the finest jewellers in Europe.

Brooch/pendant in platinum with emerald and diamonds, 1958 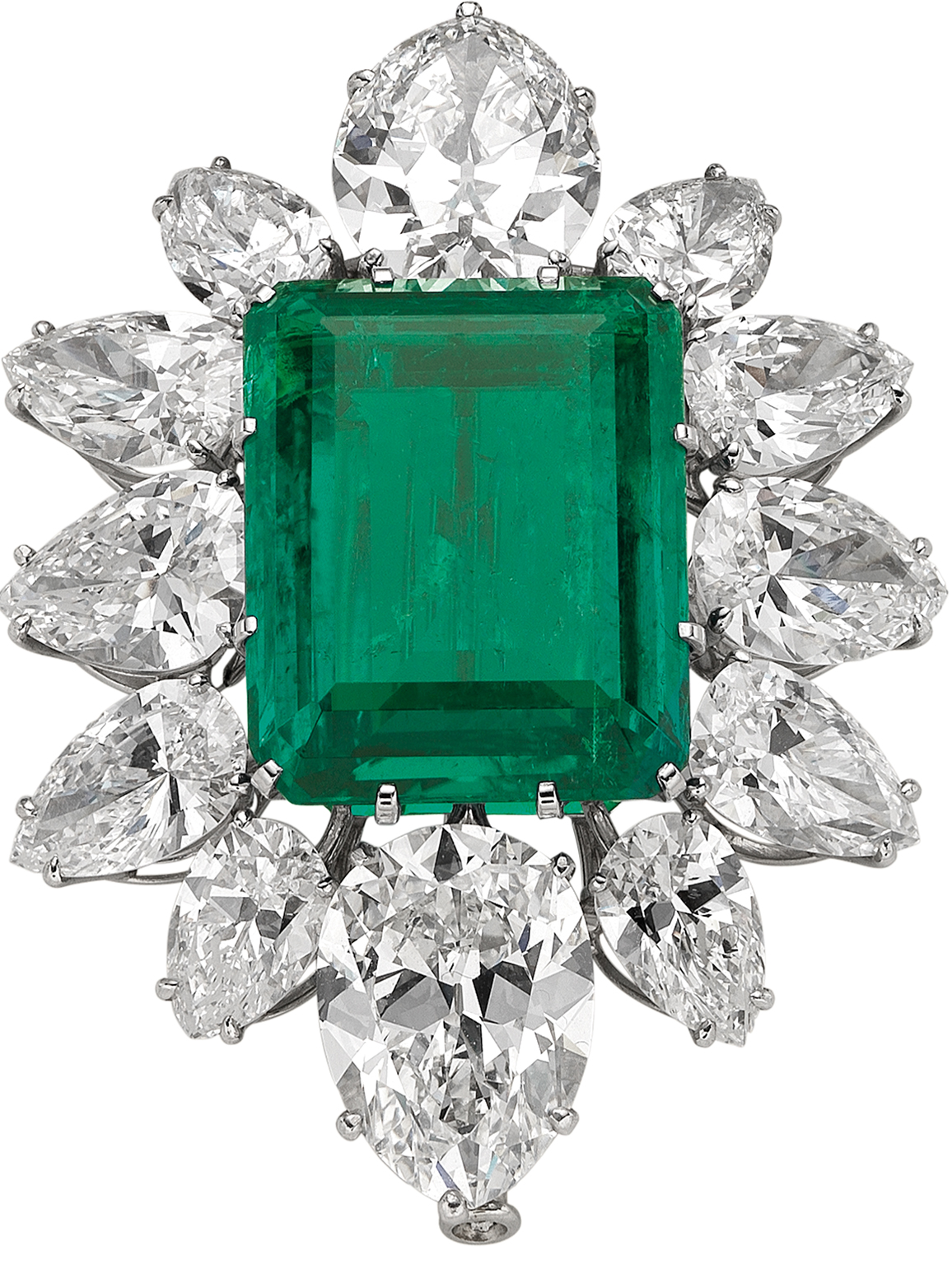 Brooch/pendant in platinum with emerald and diamonds 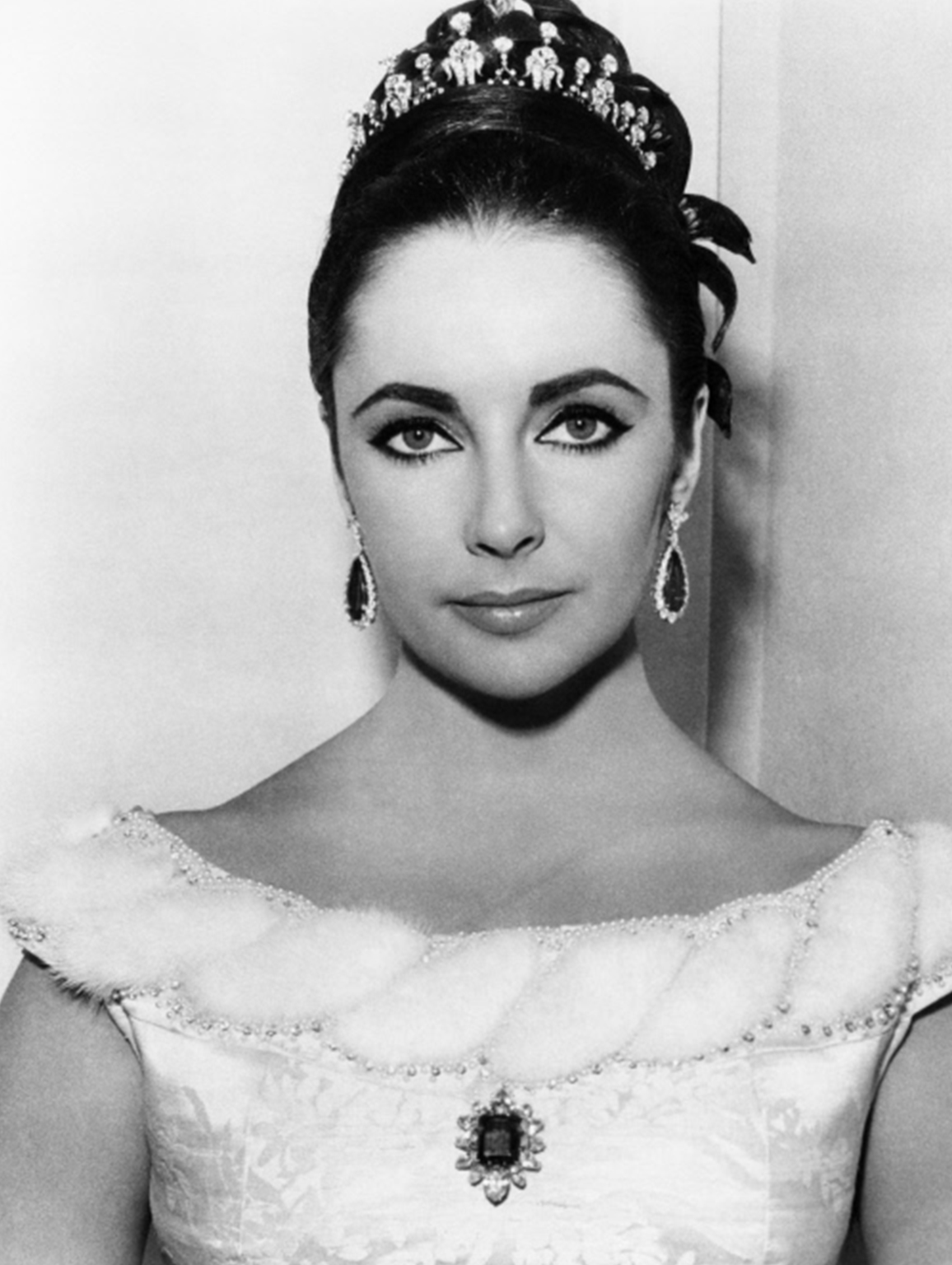 Created in 1958 with an octagonal step-cut Colombian emerald of 23.44 carats, the brooch was given to Taylor by Burton for their engagement in 1962, and worn by the actress on their wedding day in 1964. The brooch was later attached as a pendant to the necklace, which Burton gifted Taylor at their wedding in 1964.

Pendant earrings in platinum with emeralds and diamonds, 1960 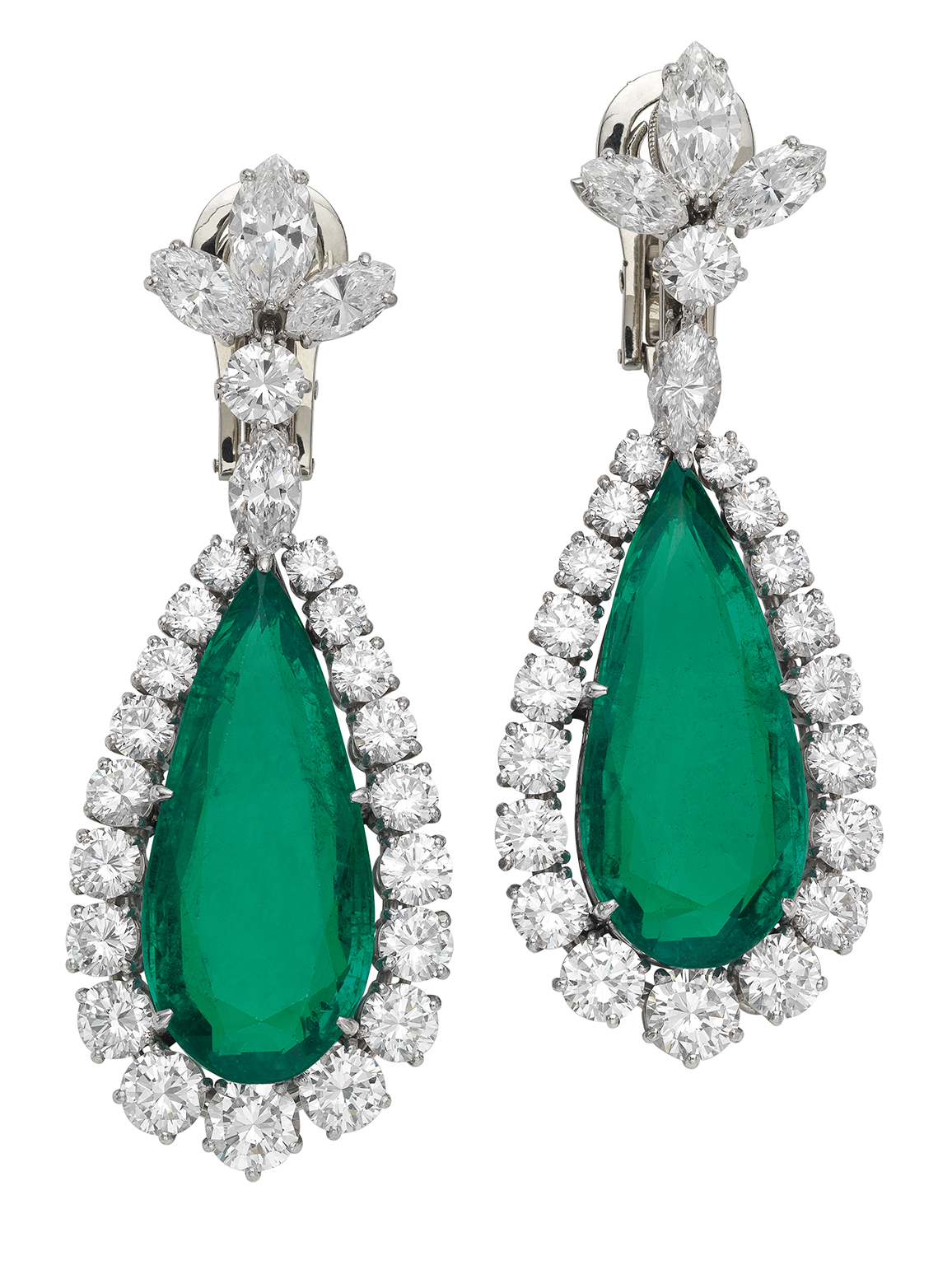 Bulgari pendant earrings in platinum with emeralds and diamonds 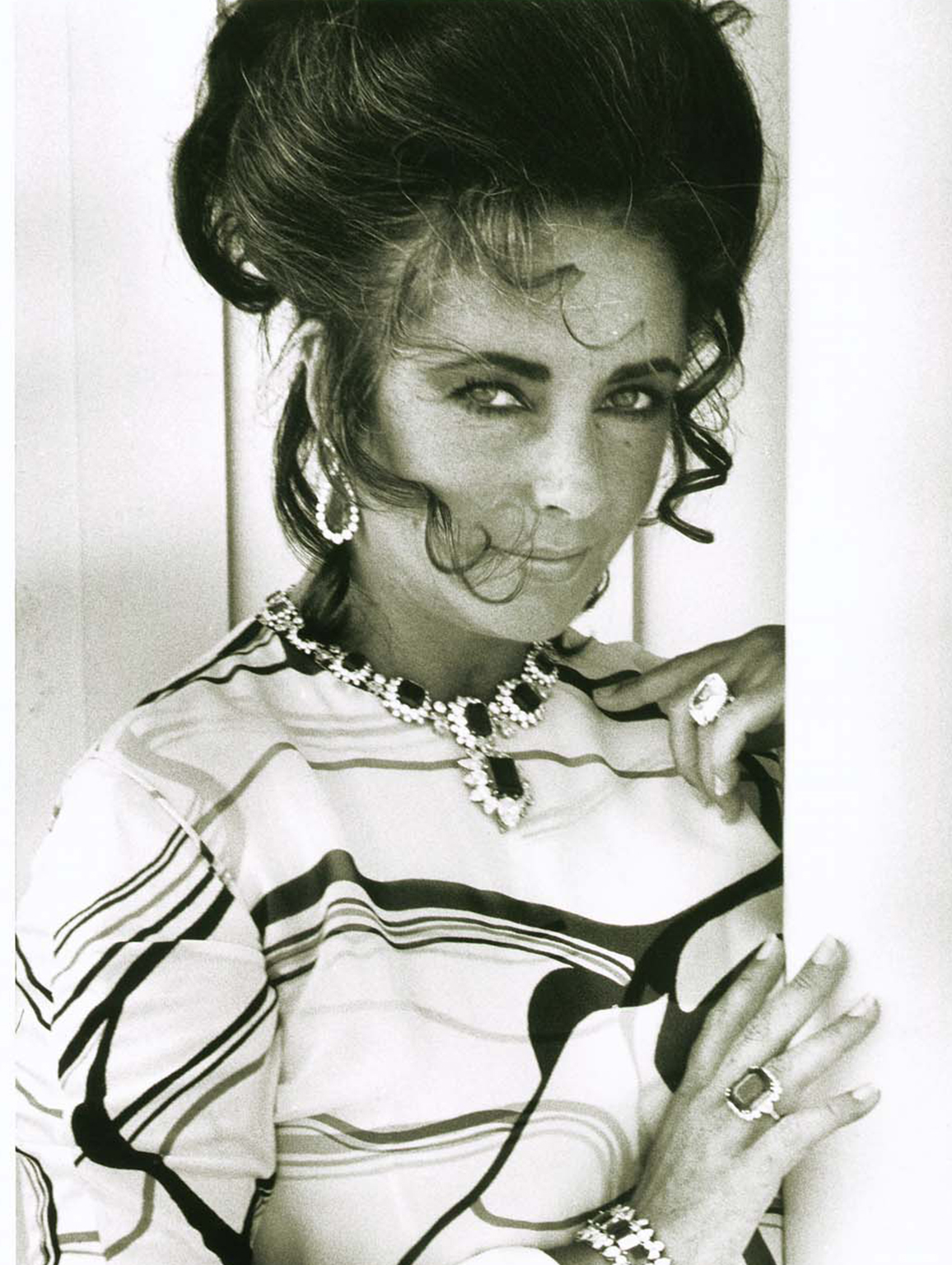 The earrings were another gift from Fisher to Taylor

Another gift from Eddie Fisher to Taylor, these earrings are made of two pear-shaped Colombian emeralds weighing a total 20.64 carats. The actress famously wore them to the party thrown in honour of actor Kirk Douglas, star of the film ‘Spartacus’, in Rome in 1961.

Sautoir in platinum with sapphires and diamonds, 1969 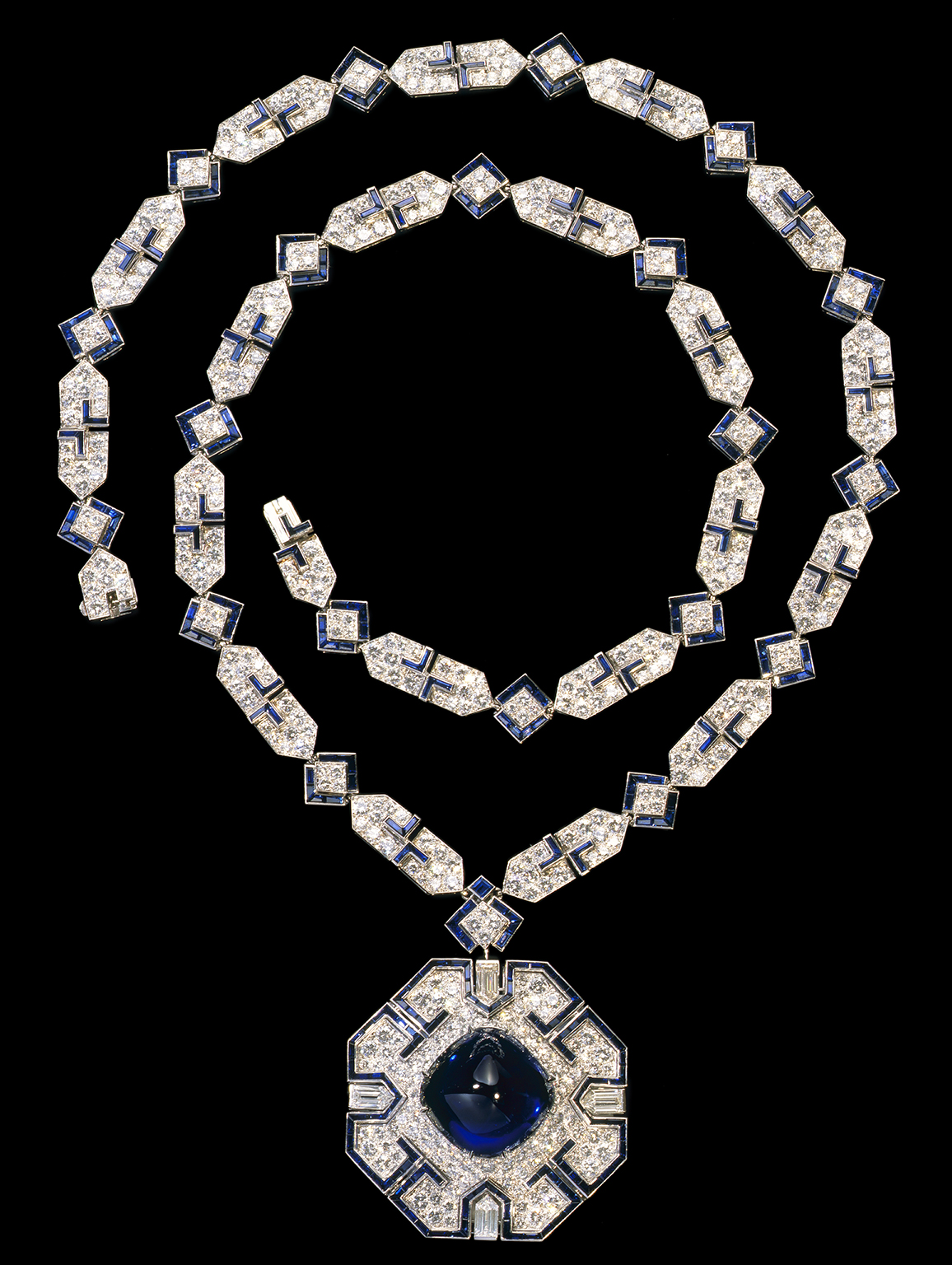 Sautoir in platinum with sapphires and diamonds 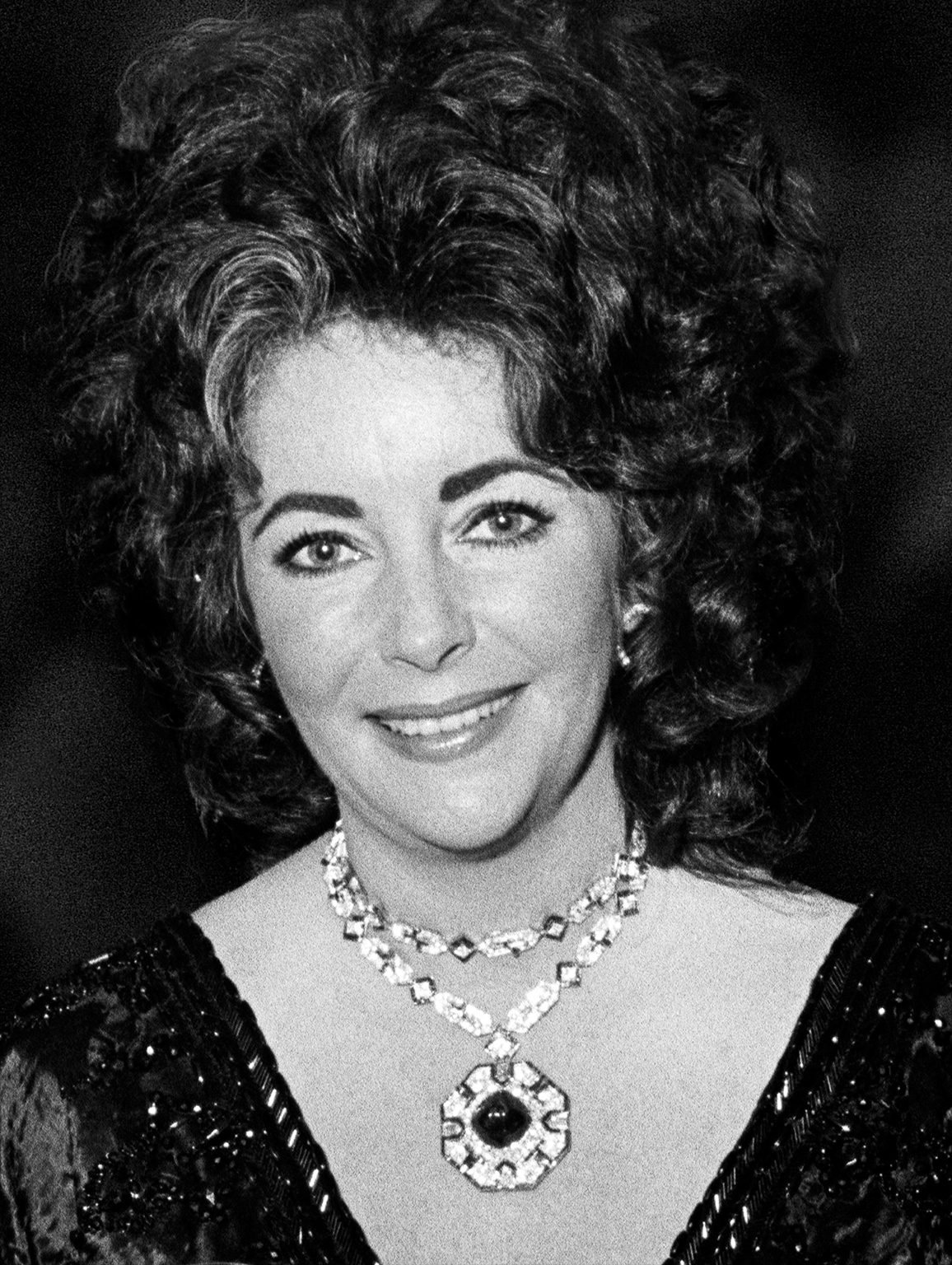 the necklace was a gift from Richard Burton to Elizabeth Taylor on her fortieth birthday.

This sautoir created in 1969 exemplified the evolving design narrative of Bulgari with its daring and eclectic style, and was a gift from Burton to Taylor on her fortieth birthday. It consisted of a detachable pendant mounted in the centre with a sugar-loaf cabochon Burmese sapphire of 65 carats, and a chain decorated with a pavé of brilliant-cut diamonds and calibrated sapphires.

Bulgari Jewellery Elizabeth Taylor Elizabeth Taylor Jewellery Richard Burton Bulgari Jewels Bulgari and Elizabeth Taylor
Anupam Dabral
Sr. Associate Editor
It was while studying fashion journalism at London College of Fashion that Anupam developed a keen interest in the anthropological aspect of the discipline; for him, fashion only makes sense when seen in the context of its environment. He is always on the hunt for great stories, and in his spare time binge-watches films/shows starring Whoopi Goldberg, Dawn French and Jennifer Saunders.
Fashion Jewellery Style
Sign up for our newsletters to have the latest stories delivered straight to your inbox every week.

Bras, waist chains, and jewel caps: How jewellery is making a comeback this summer

Flowers and sunsets at the Bulgari High Jewellery trunk show