May birthstone: 6 ways to wear emerald this month

Style
May birthstone: 6 ways to wear emerald this month
Share this article
Next article

A pure definition of the hue ‘green’ and the perfect colour for springtime, May’s birthstone emerald has captured our hearts and souls for decades. According to the American Gems Society, this “green gem” also know as smaragdus in Greek happens to be one of the rarest of them in an intense green-blue colour.

Emerald has been a beloved for millennia, signifying rebirth and renewal. Legend has it that this rich and vibrant mesmerising stone has the power to make its wearer more intelligent and bright. It was believed to have strong healing powers like the ability to cure diseases like cholera and malaria. Today, it continues to be a symbol of health, wealth, and vitality.

Similarly to aquamarine, emerald is a variety of beryl, a mineral that happens to grow with six sides and can extend up to a foot in length. Hunting down your perfect emerald cut gemstone really depends on the skills of gemologists.

Holding a special space during the history of enchanting royalty, the May birthstone has been adorned by everyone from Egyptian Pharaohs to Inca emperors. Interestingly, Ireland gets its name as ‘the Emerald Isle’ from to its lush green rolling hills that give it a meaningful role in Irish jewellery culture. Even in today’s pop culture, we have seen famous faces like Angelina Jolie and Lady Gaga flaunting their emerald at award functions while catching everyone’s attention.

Treasured as the gemstone gifted for 20th and 30th wedding anniversaries, there’s no doubt that emeralds have been and are still possessed as one of the most stunning pieces in the history. Interestingly, Emerald is found all around the world and typically mined in Colombia, Brazil, Afghanistan, and Zambia.

Making a perfect gift to celebrate any occasion, we’ve rounded up six ways you could rock emerald pieces from global fine-jewellery designers from all around the world. An undeniably stunning ring that speaks elegance. Nam Cho’s opulent ring has been crafted with a gorgeous array of gemstones and dipped in lustrous 18-karat white gold. The beautiful ring flaunts a teardrop-shaped Columbian emerald in the centrepiece of rose-cut pavé-set white diamonds. Flaunt this stunning ring like a queen and style it with rich green attire. Somewhat beautifying the galaxy vibe, Colette’s Emerald Moon Necklace is one intriguingly stylish pendant that really catches your attention. This signature piece from their Galaxia collection features black and white diamonds, pearls, and moonstones, and many elements of Earth to reflect that dreamy milky way. Molded in 18-karat black gold, set with 0.84 carat white diamonds, and 1.5 carats emerald, this charming pendant is completely owning it. Nam Cho’s large dazzling drop earrings are adorned with a cabochon green onyx and surrounded by a multitude of small adorable pavé-set emeralds. Dipped in 18K white gold and black rhodium, with rose-cut diamonds, emeralds, and onyx, this style is made to complete your red-carpet look. It’s rich in taste and yet so fashionable in every sense. Oversize rings have been a hot trend in recent times and it’s quite the playful and cheeky way to make a statement. Wendy Yue’s oversized floral ring flaunts a beautiful 6.67 carats of emeralds making us quite starstruck with its grace. Blooming with 2.82 carats of emeralds, 2.72 carats of white diamonds, and 2.26 carat stone in the centre, the luxuriant ring swims in pure 18K white gold. It’s definitely springtime calling us in. 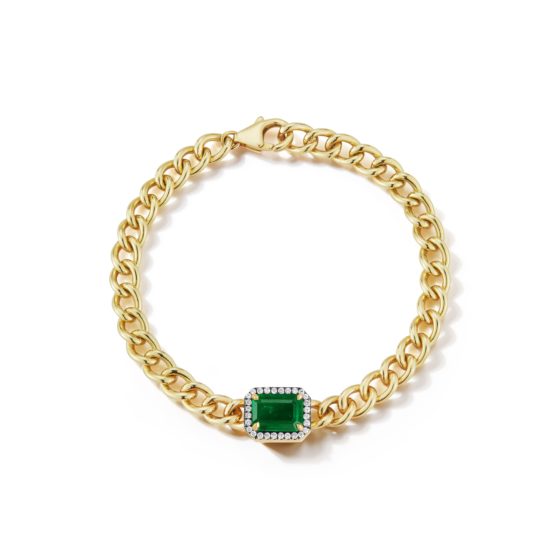 Emerald has always been flaunting that royal stance and this astonishing bracelet proves it all. Jemma Wynne’s Toujours Emerald and Pave Diamond Solitaire Bracelet is that perfect blend of classic meets chic. The handmade jewellery has been folded in 18k Yellow Gold and mounted with 0.13cts diamonds and 1.40 carats Zambian Emerald. The New York-based designer ensures that we could enjoy luxury even without having it overdone. We couldn’t have ended our list with any other Emerald ring! Though not in Thailand, it’s Mother’s Day this coming weekend in many parts of the world and there couldn’t be a more ideal gift other than Arman Sarkisyan’s Mother & Child Ring. This ring truly cherishes the bond and symbolises the unconditional love between a mother and child. The birds are coated with 22k silver diamonds 9.56 carats with an emerald stone in the centrepiece.

Shop Now
Jewellery Emerald jewellery designers May birthstone
Alisha Pawa
Writer
Alisha is a passionate dancer and is always creating her own choreographies. She is a fan of rom-com novels, a coffee-drinker who loves tea, and is always on-the-go for her midnight chocolate cravings. She hopes to tick-off her never-ending bucket list one day by hosting her own travel show.
Arts & Culture Beauty Trends Travel Tech