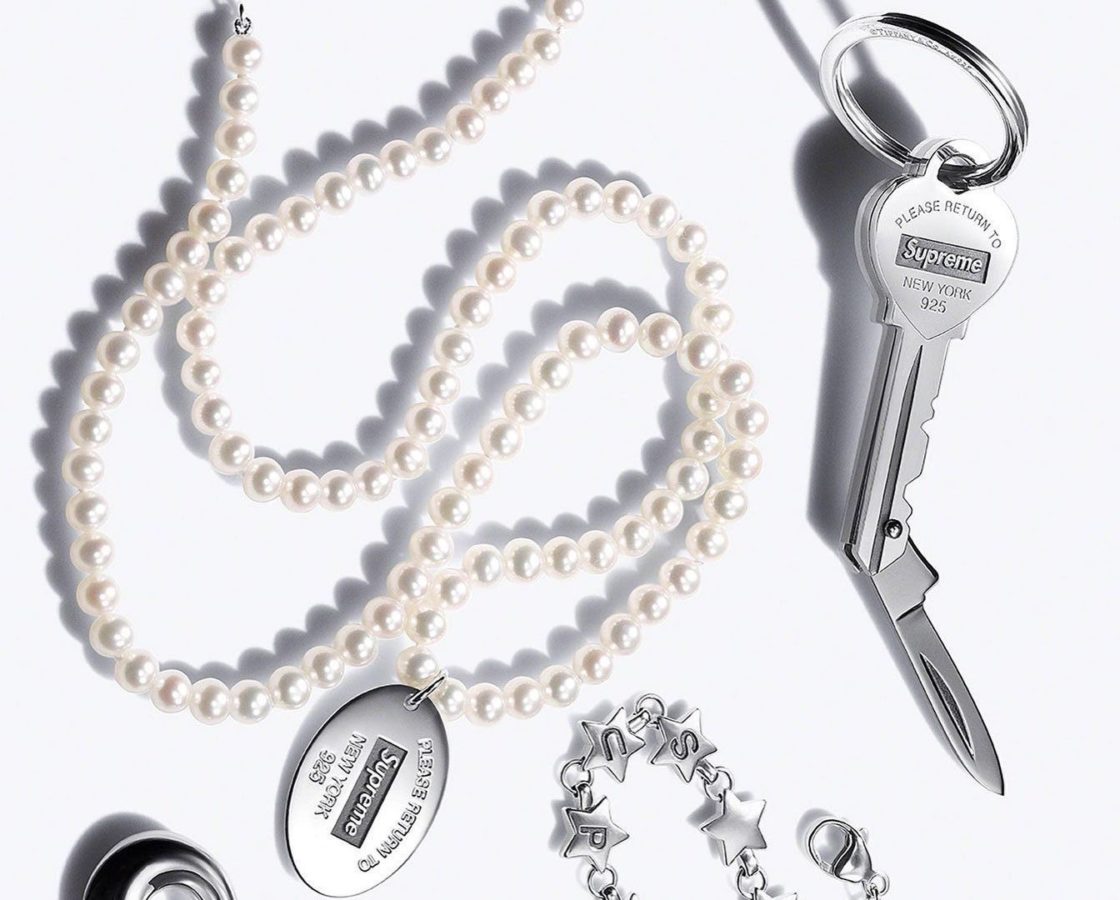 The Tiffany & Co. x Supreme collab is landing worldwide this 11 November 2021. Here’s what we know.

The mixing of genres and styles is as relevant as ever in the fashion world, where collaborations seem each more unexpected than the next. The latest brings together two very distinct worlds — jewellery and streetwear — and two major names: Tiffany & Co. and Supreme. And it’s a combination that already looks like a sure-fire success…

A shockwave rippled through the world of fashion this weekend — and we’re hardly exaggerating — when legendary jeweller Tiffany & Co. and luxury streetwear giant Supreme simultaneously posted a teaser on social media suggesting a collaboration. Almost 24 hours later, the rumours were confirmed, with two new simultaneous posts giving a clearer idea of what the fruit of this partnership will look like.

The jeweller has indeed teamed up with Supreme on a collection of sterling silver jewellery, mixing the style and DNA of each brand. Some pieces have a hint of bling — although this remains quite subtle — such as a key-shaped keyring that turns into a pocket knife, and a bracelet with several stars. The collab also makes use of the fine, high-end materials typically associated with the expertise of Tiffany & Co. with a necklace made entirely of freshwater cultured pearls.

Called “Return to Tiffany,” the collection draws inspiration from a series of pieces launched in the 1960s, the two houses explain on their respective Instagram pages. The collaboration, landing from November 11 worldwide — or November 13 in Japan — also includes a logo T-shirt.

After featuring Beyoncé and Jay-Z in its last campaign, Tiffany & Co. appears to be continuing its drive to diversify and reach out to a new, younger target with this collection. It is embodied by various young talents, including the skater, designer and model Sean Pablo.

Fashion Tiffany & Co. Jewellery Supreme streetwear
You might also like ...
Beauty & Grooming
Everything we know about Supreme’s first-ever lipstick, created by Pat McGrath Labs
Style
First Look: The Supreme x Lamborghini Spring 2020 collection
Style
5 streetwear labels to cop besides Supreme and Off-White
Style
Beyonce and Jay-Z star in Tiffany & Co.’s latest ‘About Love’ campaign
Lifestyle Asia
Here's where you can read the latest news and stories from Lifestyle Asia and our sister titles PrestigeOnline and Augustman, curated from all of our editions in Hong Kong, Singapore, Kuala Lumpur, Bangkok and India.
Luxury

A closer look at the Tiffany Knot collection, a symbol of bold elegance