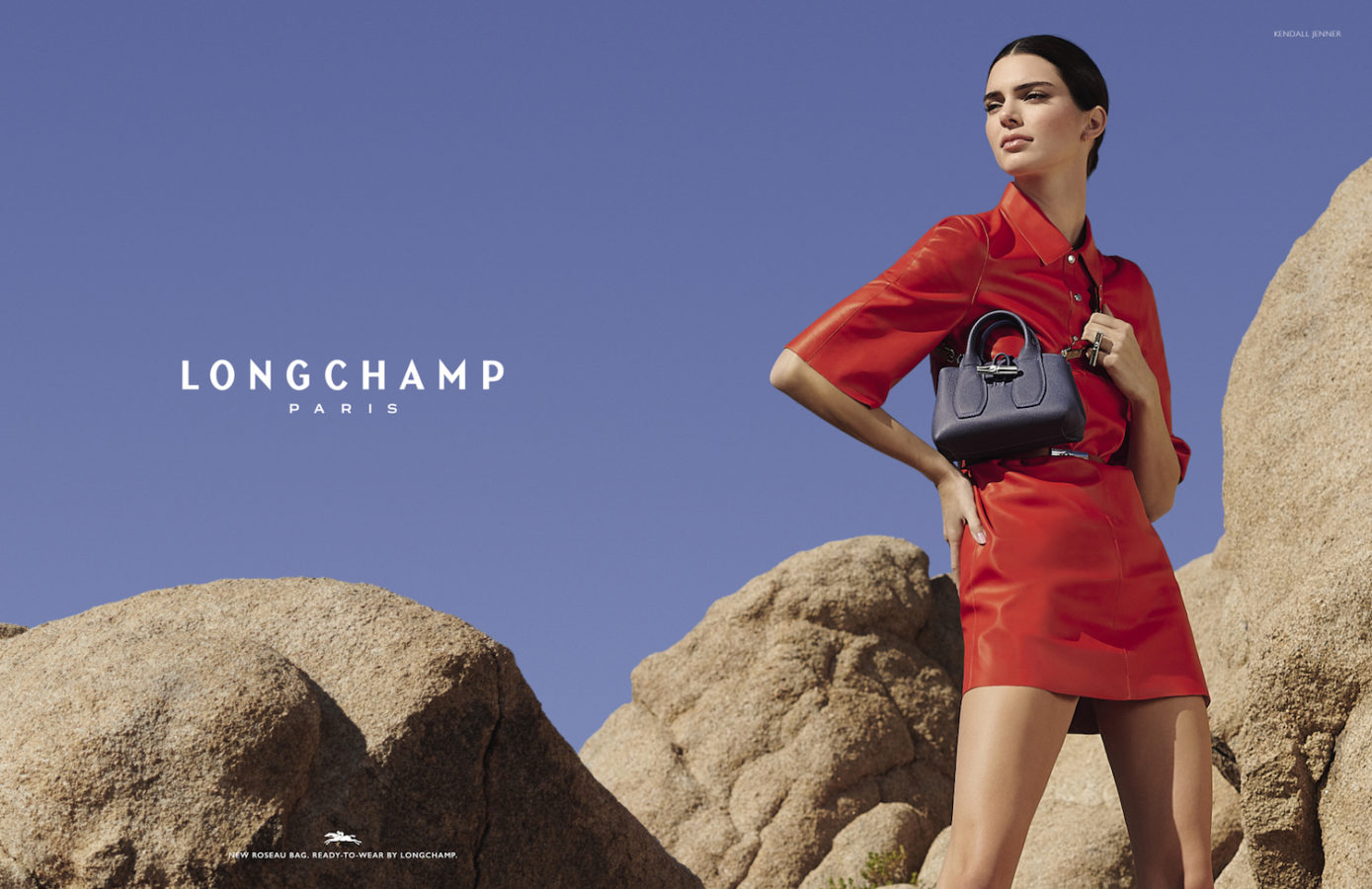 A model member of the Kardashian-Jenner clan, Kendall Jenner is back more dashing and sophisticated than ever with Longchamp’s 2020 summer campaign. Since April 2018, the American celebrity model has long been the French fashion house’s ambassador. She makes an appearance once again with this year’s collection under the theme “the journey of the sun from dawn to dusk.”

Having posed with horses, which are a signature for the French luxury house, Kendall Jenner has returned to her American roots with this latest campaign, which presents the 2020 summer collection in the Californian desert. This was by no means an arbitrary choice for Longchamp, which aimed to underscore the theme chosen for the collection with a play on the intensity of sunlight at different times of the day.

Shot by photographer Columbine Goldsmith, the campaign also highlights the perfect balance of Parisian elegance and Californian cool characterized by collection. Its key image shows the catwalk star wearing a red leather mini dress under the midday sun. The colour of this outfit strongly contrasts with the azure sky and the neutral tones of the surrounding rocks. Slung over her shoulder, Kendall Jenner also wears a mini-version of  Longchamp’s iconic Roseau handbag, which is distinguished by its bamboo clasp.

In two other shots taken at dawn and dusk, the model first wears a  pastel pink nylon hooded dress with a mini-Roseau bag in black lacquered leather, before changing into a leather coat, which is matched with a barenia calfskin Roseau bag with a studded leather shoulder strap.

Kendall Jenner has been the face of Longchamp for several seasons, but that has not prevented her from posing for other major brands. The American top model has recently been on view in campaigns for Liu Jo, Versace, Stuart Weitzman, Giambattista Valli x H&M and Calvin Klein.

Longchamp Kendall Jenner Kendall Jenner Longchamp the journey of the sun from dawn to dusk
You might also like ...
Style
Sophie Delafontaine is making Longchamp a brand of the future
Living
Q&A: William Harris on AvroKO and future design trends
Beauty & Grooming
5 beauty buys to gift bae this Valentine’s Day
Style
All the Spring/Summer 2020 fashion campaigns you need to see
Staff Writer
Style

Living
Our Good Life Guide to Staying In
Style
Best Dressed in Bangkok: Quarantine Grocery Shopping Edition
Culture
30 things to do to kill quarantine boredom
Style
8 fashionable face masks for Bangkokians with style
Food & Drink
The best burger deliveries in Bangkok
Culture
In Case You Missed It: our 10 most popular stories in May 2020
Food & Drink
Nutritionist Non-Confidential: how to pack yourself a not-sad desk lunch
Gear
How Google Maps aims to support struggling local businesses
Style
Why you’ll love Miu Miu’s latest vintage fashion challenge, #MiuMe
Style
Onitsuka Tiger x Shu Uemura: a collab where sneakers meet cosmetics
Sign up for our newsletters to have the latest stories delivered straight to your inbox every week.

All the Spring/Summer 2020 fashion campaigns you need to see

3 wellness spots in Bangkok for your next Selfcare Sunday

Splurge onto Friday with this dreamy pink strawber

Who is dreaming about going to Bali before 2020 is

@boobie_billie shows us that social distancing is

After COVID-19, what lies in the future for luxury

Because elegance never goes out of style. 📷cred