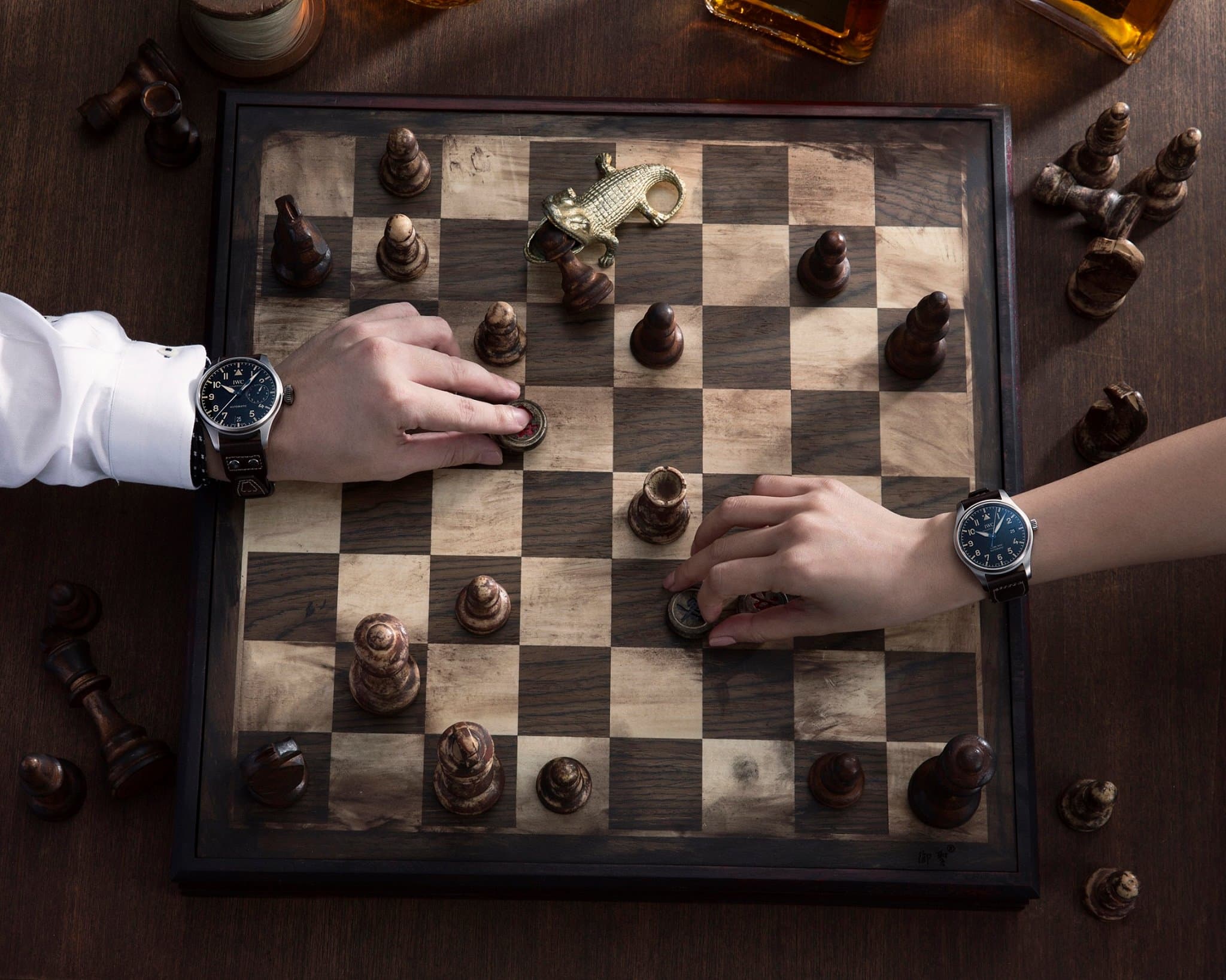 Charlize Theron wears a 44mm Rolex Submariner like it’s nobody’s business. Lady Gaga is the new brand ambassador for Tudor. And just this month, Audemars Piguet dropped a full new collection that was entirely genderless. The lines between a ‘man’s watch’ and a ‘woman’s watch’ are beginning to beautifully blur, and the result is wildly intriguing – not just stylistically, but also socially.

After all, we have been fascinated by men’s watches for women since the early 1950s, when the first Rolex Datejusts, Daytonas, and Day-Dates started appearing not only on the wrists of men, but also of women. Well into the 90s and 00s, many celebrities – from Jennifer Aniston and Reese Witherspoon to Hillary Duff – started sporting men’s models too, particularly large sports models, received with much cool curiosity.

It shouldn’t come as much of a surprise, considering that men’s watches are often larger, less bejewelled, and commonly boast a more complicated and interesting movement. They’re the highest markers of quality and durability, and to be completely fair, they aren’t really home to a particular gender, but rather to the wrist of anyone who can appreciate them.

Regardless, a ‘man’s watch’ on a woman has an appeal unlike many other style staples. It’s a statement, a power move, and a downright seductive juxtaposition between structures, colours, and most obviously, masculinity and femininity. In the words of Hodinkee editor Cara Barett, “Women aren’t staying home and hosting lots of cocktail parties anymore. That is reflected in the change of the style of watches that women wear. More women are in boardrooms, more women are working, more women are doing thousands of things.”

From dive watches to dress watches, read ahead for a few of our top choices for classic men’s watches that actually look really great on women too. Between steel bracelets and dramatic dials – oh, man, it’s a great time to be a woman who loves a good watch. 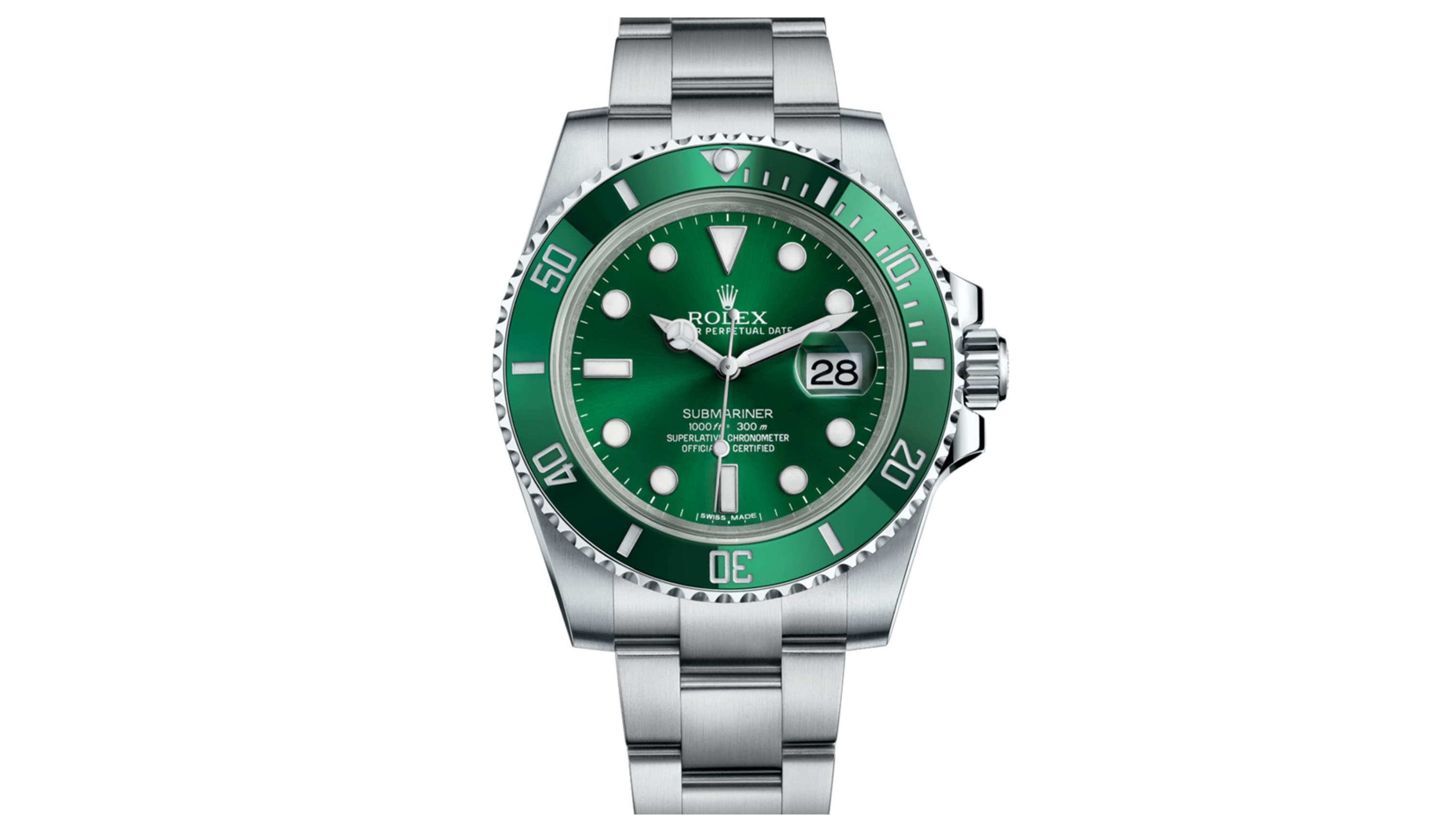 If there is one watchmaker that reigns supreme when it comes to men’s watches for women, it is Rolex. Be it the classic Daytona, Yachtmaster, or even the GMT-Master II, there is something both incredibly powerful and sophisticated about a Rolex timepiece, especially the men’s models. Another classic collection of the house, this Rolex Submariner Date (THB 320,900) is a fine example, boasting a distinctive green dial and the watchmaker’s signature Oystersteel case and bracelet. A dive watch that has long set the standard since its launch in 1953, the 40mm timepiece features a rotatable bezel, luminescent capsule, and a knurled edge designed for better grip under water. Highly functional, robust, and no-fuss, it’s a watch for the strong woman who can turn others green with envy. Also, given its bold dial hue, it’s definitely a fun one to pair with outfits and accessories, too. 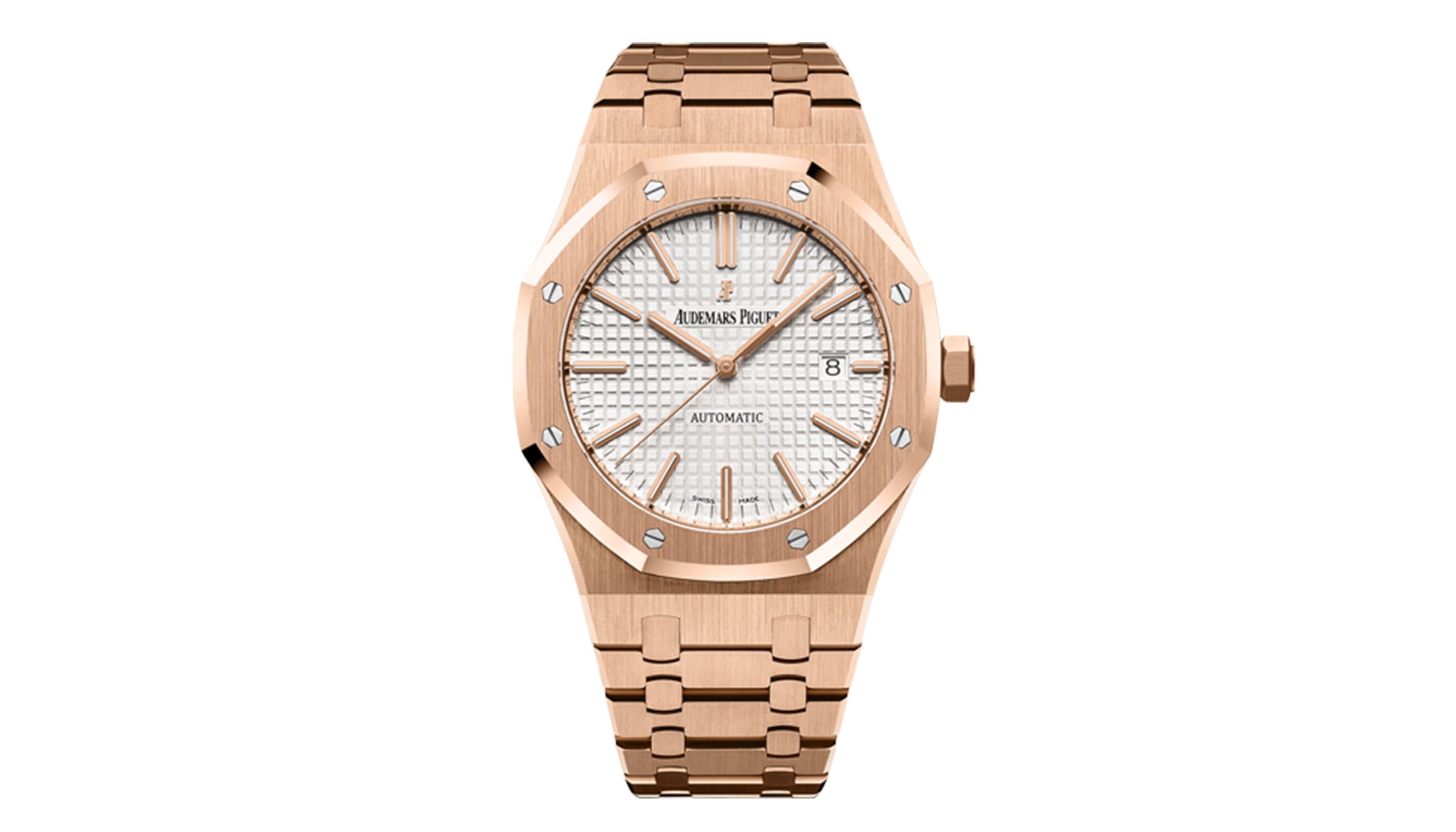 Sure, Audemars Piguet makes their iconic Royal Oaks for women too, but there’s just something bigger, bolder (and bad-der?) about a men’s Royal Oak on a lady’s wrist. The signature octagonal case can be spotted from a style mile away, and in this model (approx. THB 2,945,930), the 18-carat pink gold case really provides much to swoon for. It’s bigger than the women’s model at 41mm, really showcasing the silver-toned dial with its Grand Tapisserie pattern, and contrasting pink gold applied hour-markers. It’s a watch that doesn’t need vivid complications or tourbillons to give it a striking aura of strength, and it’s a modern classic that catches eyes and admirers from the get-go. 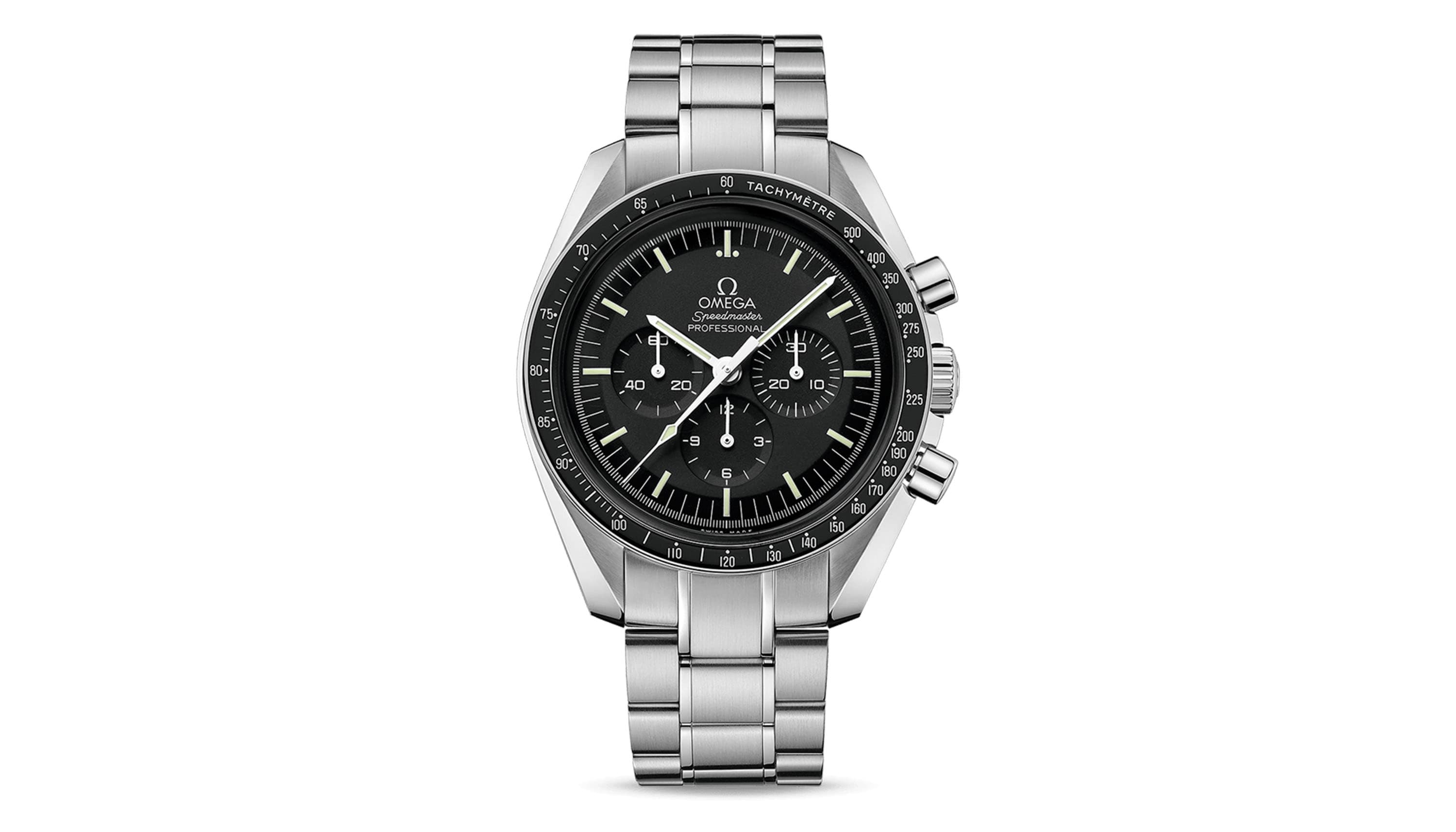 For all those times your heart is a space-bound rocket ship and a great watch is the moon: the OMEGA Speedmaster Moonwatch Professional Chronograph 42mm (THB 203,000). The first watch to be worn on the moon, OMEGA’s Speedmaster has witnessed incredible human feats throughout modern history, and for the woman looking to make and write her own history, it’s an impressive timepiece to bear. Featuring a steel case and bracelet, the 42mm manual-winding watch boasts a black dial graced by a small seconds sub-dial, 30-minute recorder, 12-minute recorder, a central chronograph hand, and a tachymetric scale. As an added perk, the timepiece also comes with a special astronaut’s ‘NATO’ strap, for all those times you may not quite make it there, but can still swoon to the moon. 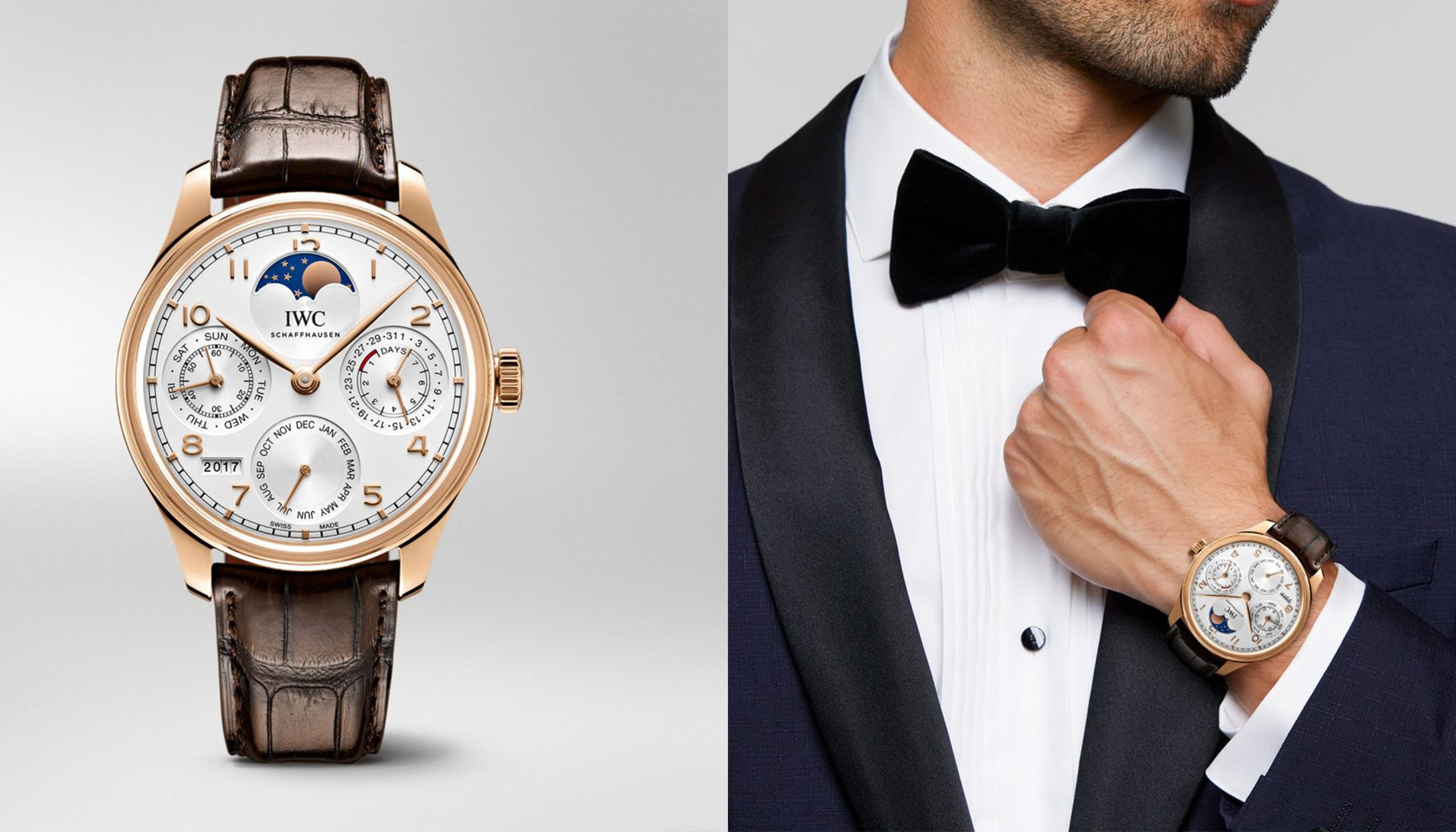 There’s something really dreamy and romantic about a perpetual calendar watch, and IWC’s Portugieser line provides perhaps some of the most beautiful on the market. This automatic self-winding model (approx. THB 1,305,930) features an 18-carat red gold case, with displays for the date, day, month, year, and even perpetual moon phase, in the form of four sub-dials on the silver-plated dial. The timepiece is large at 44.2mm, giving its wearer all the more to admire, and completes an elegant and intelligent look with its dark brown alligator leather strap. Most commonly, women who wear men’s watches tend to go for a sports watch or a classic dress watch, yet the Portugieser Perpetual Calendar definitely proves a charming and unique alternative with its sweet night sky phase. 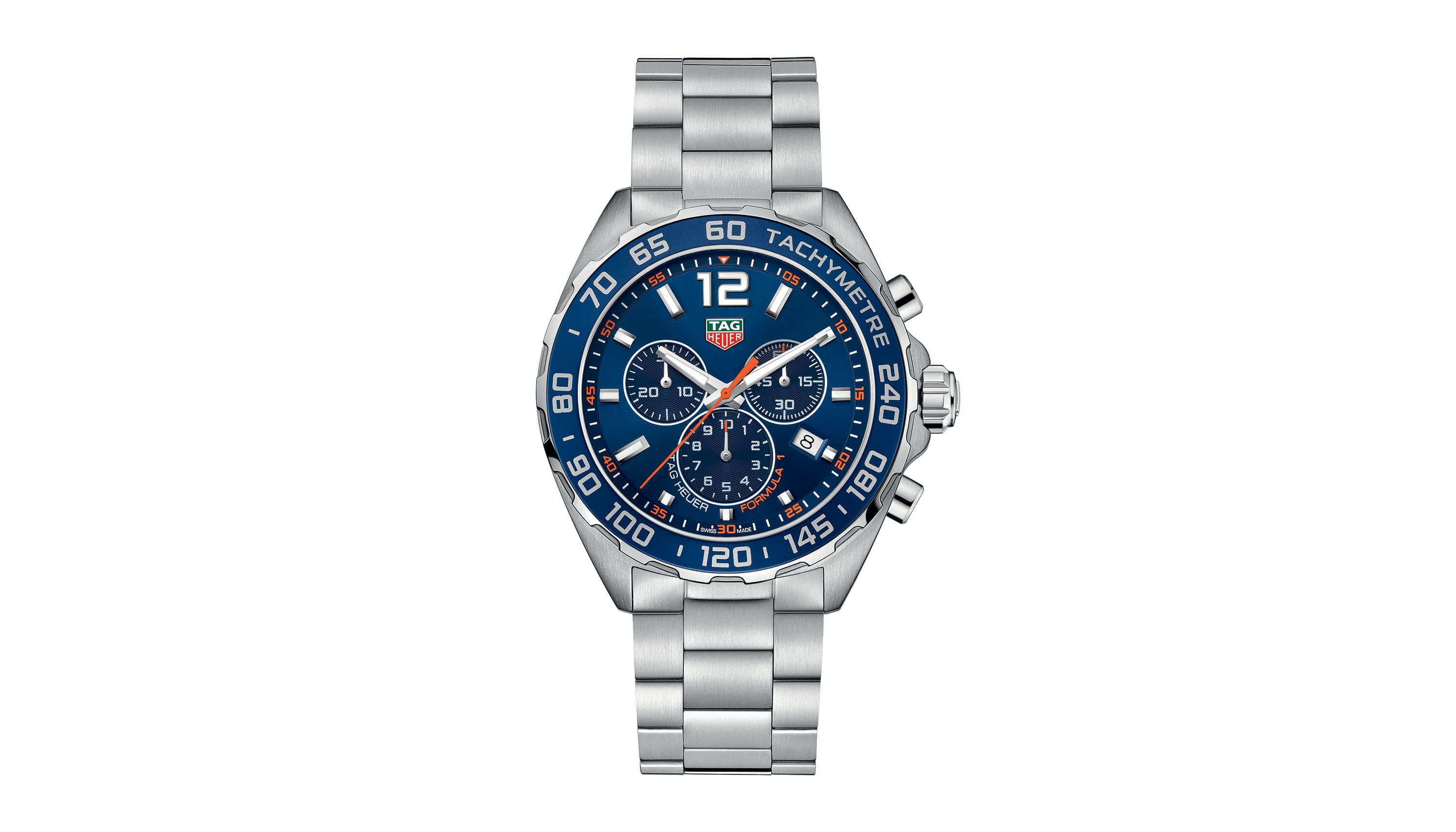 The ‘casual sports watch for a fast-paced life’, the TAG Heuer Formula 1 (approx. THB 48,940) is not for the faint-hearted. The blue sunray dial boasts three blue counters, and distinctive curved and polished hand-applied indexes and hour and minute hands. The 3-row fine-brushed steel bracelet comes with a double safety clasp, as well as a ‘racing suit’ extension, giving the 43mm timepiece its racing watch flair. The luminescent white and orange accents contrasting against the blue dial and steel exterior are definite eye-catchers, and indeed the TAG Heuer Formula 1 is best suited to those women who live for a life in the fast lane. Some things never go out of style, and if we’re talking watches, it suffices to say that you’ll never go wrong with a dress watch. The unsung (though heavily praised about) king of dress watches is undoubtedly Patek Philippe’s Calatrava, and whilst it is a gentlemen’s watch, it looks incredibly chic on the wrist of a lady too. In this model (THB 690,300), the Calatrava’s signature pure lines and perfect roundness are met with a rose gold 36mm case, and a shiny black alligator strap. The simple white lacquered dial features classic black Roman numerals, pulling together a truly timeless look. It’s subtle but not understated. Elegantly glamorous, it has much of the same flair as when a woman turns up to a gala dinner in a suit – wildly sensual in the classiest of ways. 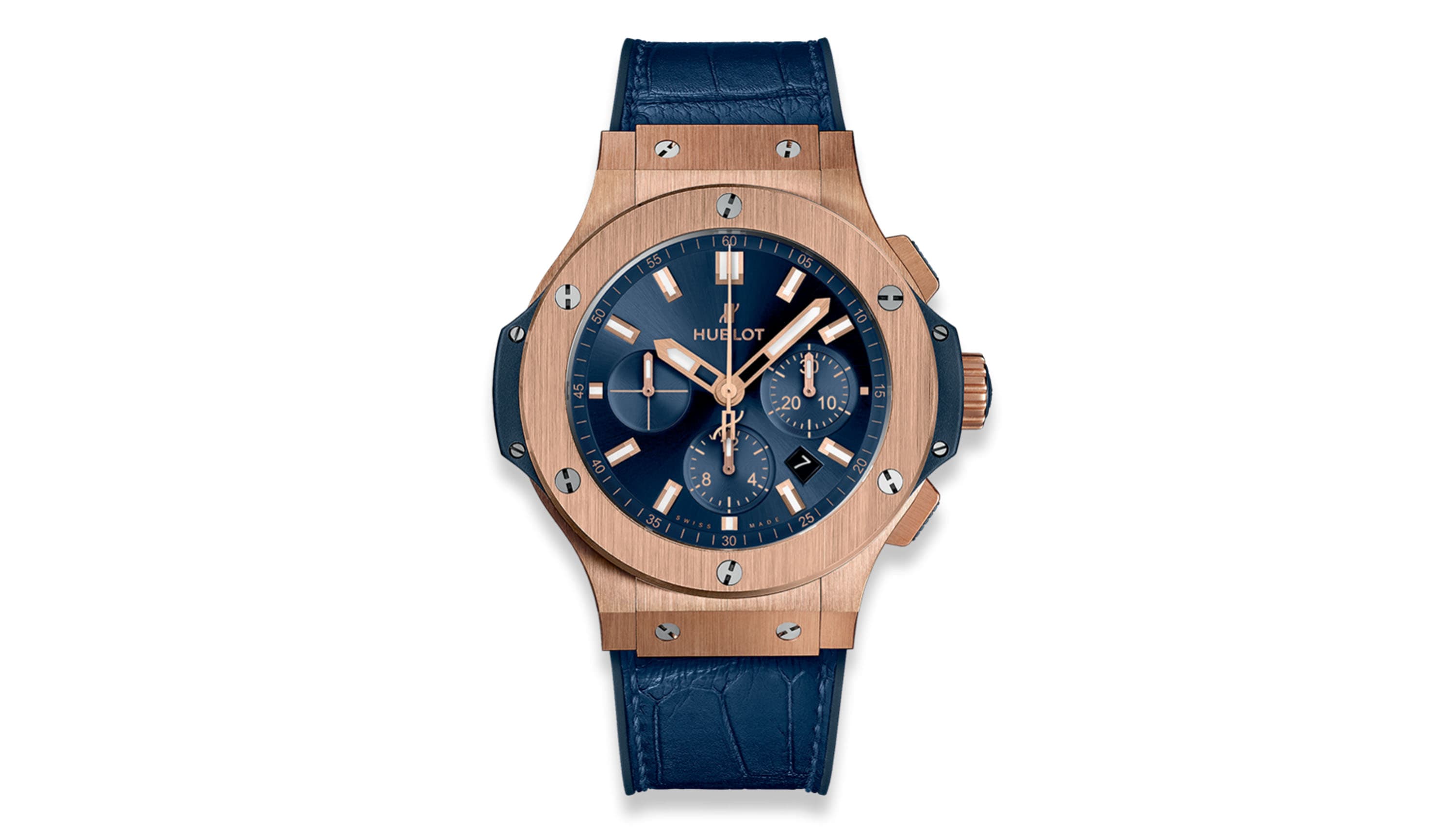 It doesn’t get more ‘statement watch’ than a Hublot Big Bang, and for a colour combination that brings a bit of royalty to the wrist, this model in Gold Blue (approx. THB 383,295) is a great option. Hublot’s Big Bang line has long been a kind of style marker on the wrists of young men, and becomes even more so on the wrist of a young woman. The 44mm 18k gold case stands in big and bold contrast to the blue sunray satin-finished dial, featuring a chronograph movement, and complimenting blue rubber and alligator straps. Far from fragile and far from silent, it’s definitely a loud timepiece that makes an entrance long before any other accessory. After all, it’s not called the Big Bang for no reason. Besides the Santos de Cartier, the Tank collection is quite possibly one of Cartier’s most iconic watch families. And whilst the French luxury brand does make Tank models for women, the men’s models are just as exciting for the female jewellery box, too. This Tank Solo Watch XL (approx. THB 108,960) comes with a steel case, and a beaded crown set with that signature cabochon-shaped spinel, a silvered opaline dial, and classic Roman numerals. The grained calfskin strap offers a vintage and sophisticated charm, and yet is in no way boring. In fact, its unique rectangular case is exactly what makes it stand out from the crowd – what, much like the incredible woman who breaks horological gender rules with this standout timepiece on her arm.

IWC Watches Omega Hublot Rolex Luxury Watches Audemars Piguet Tag Heuer Cartier Men's Watches Women's Watches Patek Philippe
Lisa Gries
Managing Editor, Bangkok
Lisa loves to travel, and is always on the lookout for the world’s best nap spots. She’s a serious Asian art history nerd, and has a knack for languages and coffee table books. She hopes to publish her own novels one day, one of which will likely be called ‘All The Great Conversations I Had In A Bangkok Speakeasy.’ It’s a work in progress.
Travel Drinks Watches Jewellery

Style
Siam Magical Moments
Culture
Our theme for April 2020 is an ode to the arts
Culture
30 things to do to kill quarantine boredom
Food & Drink
Quarantine in style with these fine-dining food deliveries
Living
Our Good Life Guide to Staying In
Culture
Editors’ Picks: our favourite feel-good movies
Culture
London’s Tate Modern shares a digital tour of the Andy Warhol exhibit
Travel
A first look at the extravagant Cheval Blanc Hotel Los Angeles
Food & Drink
An expert unpacks all: 7 tips on how to stay healthy during self-isolation
Living
5 mental health podcasts to help calm anxiety
Sign up for our newsletters to have the latest stories delivered straight to your inbox every week.