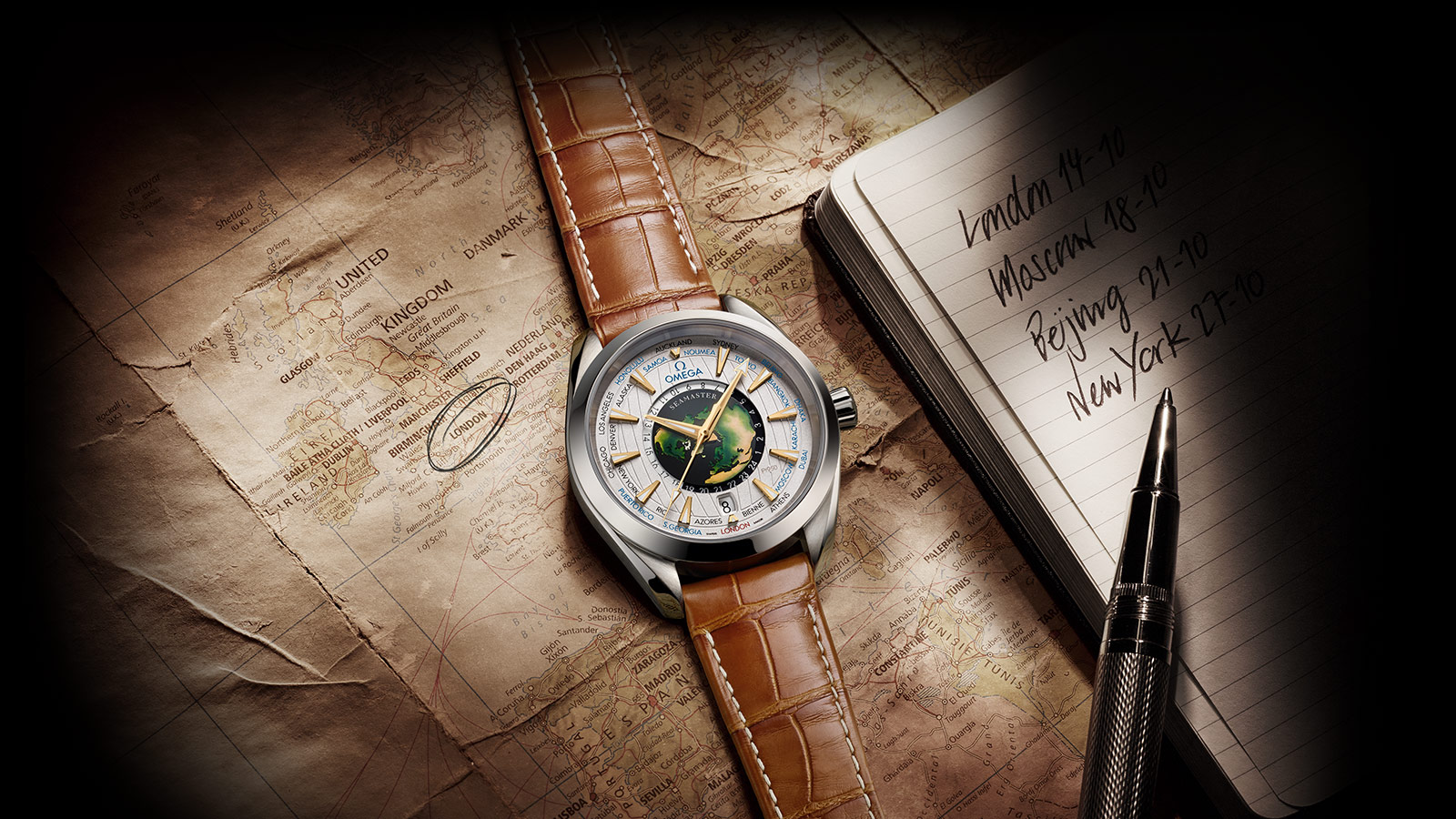 8 worldtimer watches that will take you around the globe

Between sports watches and dive watches, there are many luxury timepieces that are suitable for the avid traveler, all made with durable materials and pressure-defying sensors. And yet the world time complication, or the worldtimer watch, ups the ante for travel timepieces like no other, allowing wearers to hover over the cities of the globe with a single glimpse at their wrist.

Best recognised by an enamelled or engraved map on its dial, the worldtimer watch is picking up speed as jet-setting ladies and high-flying gentlemen alike are falling in love with its exquisite celebration of horological artistry and technological innovation. Most commonly encircled by a marker of all 24 time zones, the watch allows anyone anywhere to tell the time in many major cities, be they in New York or Bangkok. (Or just dreaming of New York and Bangkok on a rainy Monday morning.)

Journey through some of our favourite worldtimer watches of the moment, and consider them an inspired invitation to travel — through the time zones of the earth, the rotations of the sun, and the phases of the moon — all from your wrist. Simply magical. 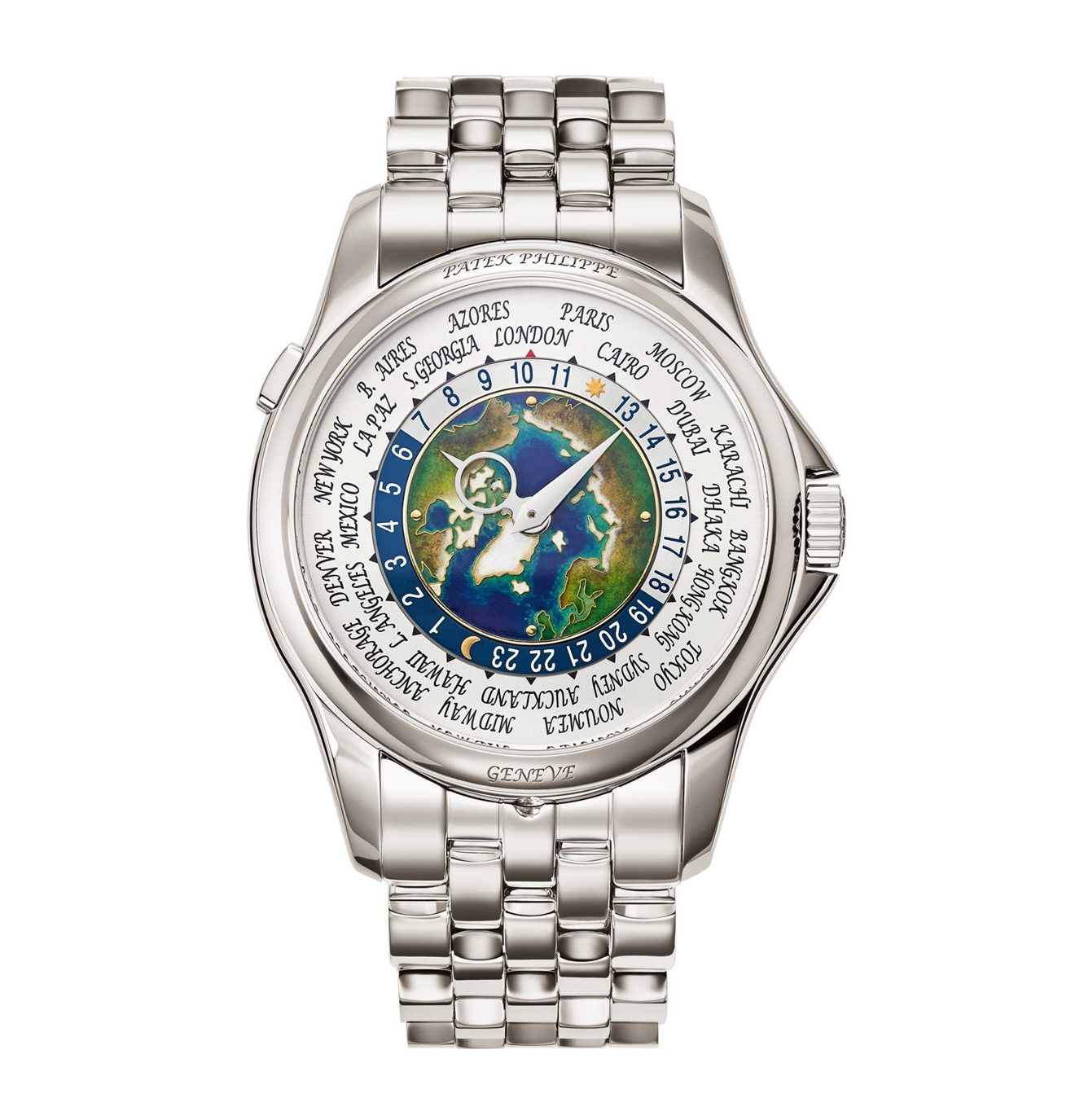 For those seeking a fresh perspective to tell time, the Patek Philippe World Time 5131/1P makes for a worthy investment. The self-winding watch comes with a 24-hour day/night indication, platinum bracelet and 18k gold dial plate. Most intriguingly, the centre dial depicts the world in stunning cloisonné enamel — from the perspective of the North Pole. A rare angle executed in brilliant depth and colour, it’s a watch that allows its wearer to feel on top of the world every time they look down at their wrist — almost quite literally. If the world is not enough, Breguet’s Hora Mundi 5717 brings you the sun and the moon in an elegant, self-winding platinum wristwatch. The 43mm timepiece bears an instant-jump time-zone display with day/night indication, reflected in a glimmering gold sun and moon to suit. Allowing wearers to switch between the times of two pre-selected cities, the watch is highly customisable. The gold dial holds a hand-engraved continent (with a choice of America, Europe-Africa, or Asia-Oceania), on a rose engine. From its signature Breguet hands to the brown alligator strap, it’s definitely an uncomplicated and classic watch, allowing wearers to always look timeless, in the stylish face of the earth and the skies. Whilst at first glance the Jaeger-LeCoultre Geophysics Tourbillion Universal Time seems like a complex watch, the Swiss watchmaker manages beautifully to uncomplicate the complicated in a watch that bears a sophisticated design and seamless function control. Holding both a map of the world and the 24 time zones within its blue dial, the star of this timepiece is undoubtedly the orbital flying tourbillon, bringing a true sense of movement onto the silvered and satin-brushed map. The tourbillon makes a complete turn of the dial every 24 hours, taking the wearer on a journey with the passing of time. This is a perfect match for world travellers and lovers of fine watchmaking alike. OMEGA’s first worldtimer watch has something of a rare treasure you would discover on a thrilling adventure in the tropics. Limited to only 87 pieces, the timepiece is one of the few watches from OMEGA to be cased in platinum. A hand-crafted enamel world map sits at the centre of the watch, surrounded by a 24-hour indication that has been colour-coded in red, black, or blue, for ease of reading. Whilst all the regular cities lie located around the centre dial, the Swiss watchmaker pays tribute to its hometown with the inclusion of Bienne at GMT +1. It is these small details that give OMEGA’s first wander into worldtimers its charm, in a 43mm watch that appears sleek and well-organised, allowing for intricacies without overwhelming its wearer. 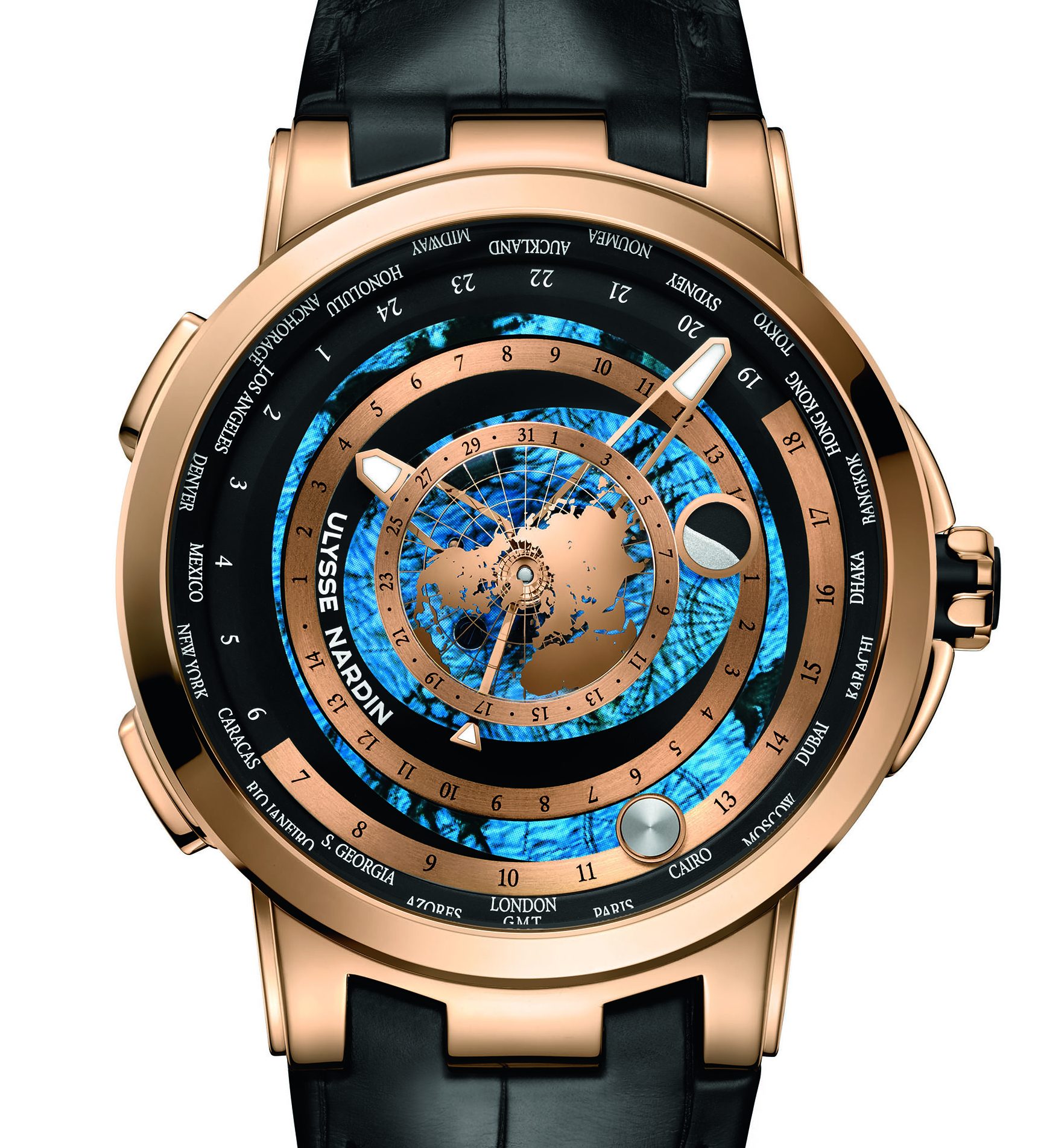 For a watch with astronomically impressive features, check out Ulysse Nardin’s Executive Moonstruck Worldtimer. Bearing not just the signature 24 cities, the watch pays tribute to the two natural phenomena between which these lie: the sun and the moon. As time passes, the wearer can witness the sun’s orbit sweeping over all 24 time zones within the striking rose-gold case on a fluorescent blue dial. What’s more, the watch also bears an indication of moon phases, and an indication of tides, making for a stunning ‘celestial ballet’ of gravitational forces for the wrist. Incredibly precise but also incredibly intriguing, the timepiece is an astounding technological feat, housed within a watch that still appears casually cool. Louis Vuitton may not be the first name that springs to mind when we talk about worldtimer watches, and yet, which brand better suited to create a traveller’s watch than the maker of the world’s most renowned luxury leather trunks? Enter the Escale Worldtime: a 44mm platinum and titanium watch with a transparent caseback, a grey alligator strap with yellow calfskin lining, and an impressively colourful dial. Boasting 38 hand-painted colours, the time can be read through three separate discs that are adjusted by the crown, with the signature ‘V’ locking in the home time set by the wearer. Vibrant and imaginative, it’s a worldtimer watch that, while still playing by the world time complication rules, is brightly and boldly bending them. A watch that will always catch all eyes and demand all attention, the Bovet Récital 22 Grand Récital boasts another horological reimagination of the three heavenly bodies, in extravagant mechanical style. Featuring a 9-day flying tourbillon and retrograde perpetual calendar, the timepiece describes itself as a ‘grand astronomical theatre’, with ‘theatre’ translating to nothing short of spectacle. At its centre, a hemispherical earth rotates on its own axis, showing the hours on a 24-hour cycle, whilst a spherical moon orbits the earth according to the exact lengths of its synodic period. The sun is represented by a flying tourbillon, and together with the other two components, can be admired through the sapphire crystal, gently magnifying the intricate mechanisms that leave its admirers dreamily looking on. 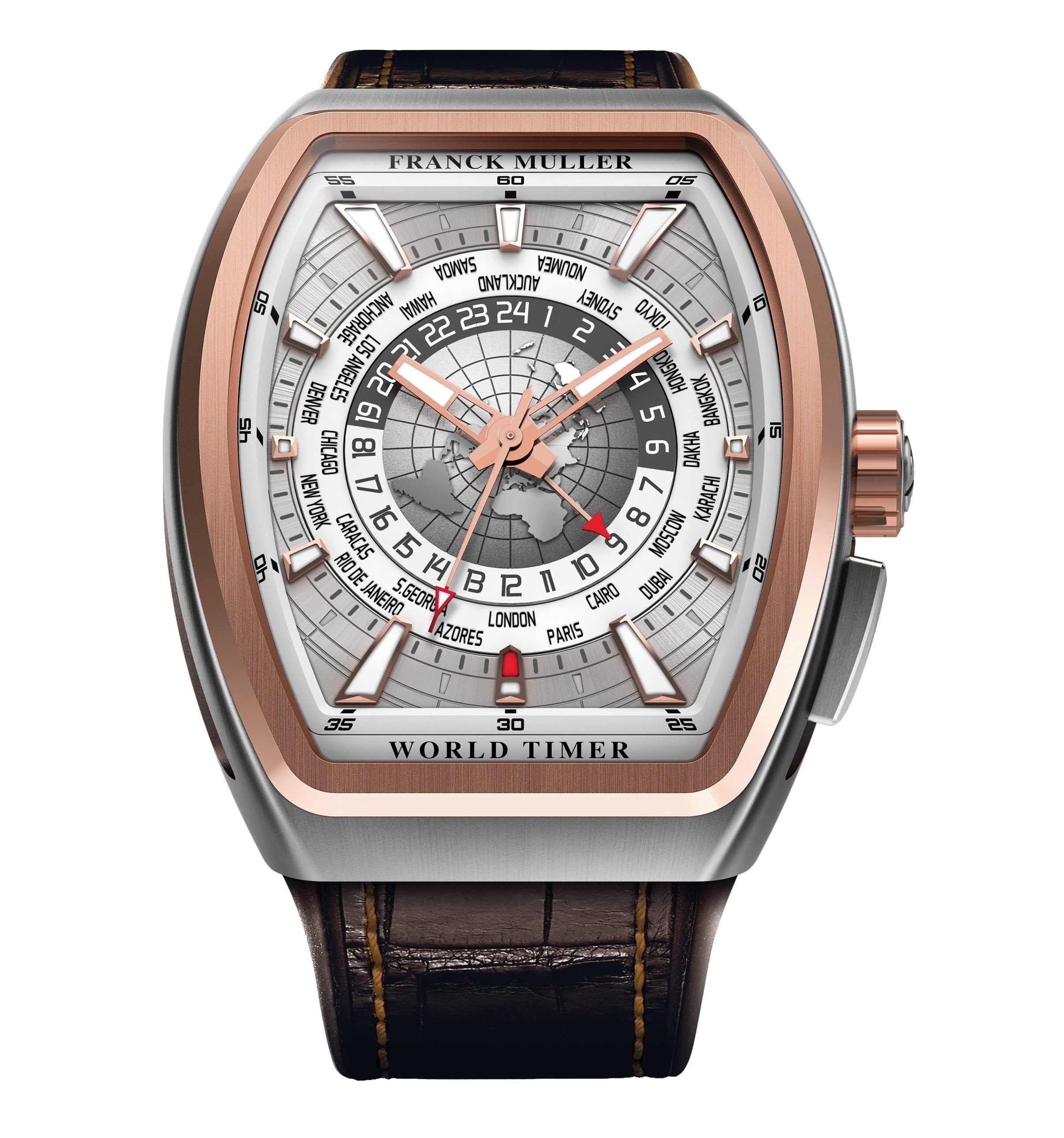 Distinguished by its elliptical structure, the recently released Franck Muller Vanguard World Timer GMT describes itself as a watch for the urban gentleman. Much like a well-tailored three-piece suit worn by said gentleman, the watch has three inner bezels, made up of a world countries ring on the outside, a 24-hour ring encircling the centre, and a relief world map at its heart. The rose-gold case is supported by a robust rubber strap with crocodile stitch in-lay, where its crown and dial allow for easy access to two world time zones at any one time — a sure must-have for any jet-setter that brunches in New York, followed by a business call in Hong Kong.

Travel Watches Omega Jaeger-LeCoultre Luxury Watches Franck Muller Ulysse Nardin swiss watches Patek Philippe Breguet Bovet Worldtimer watches World Time travel watch GMT watch
Lisa Gries
Creative Content Director, Bangkok
Lisa loves to travel, and is always on the lookout for the world’s best nap spots. She’s a serious Asian art history nerd, and has a knack for languages and coffee table books. She hopes to publish her own novels one day, one of which will likely be called ‘All The Great Conversations I Had In A Bangkok Speakeasy.’ It’s a work in progress.
Travel Drinks Dining Watches