There’s nothing more unknown and enthralling to mankind than outer space. Despite numerous exploration efforts, what lies beyond the clouds has remained mysterious and largely unexplored. Of course, some watch brands have found ways to bring the sky to your wrist, most commonly by incorporating the moon phase complication, but some have taken it a step much further with something a bit more intimate: Meteorite watches.

Obviously, meteorites are extremely rare and not all of them are suitable for watchmaking. While a considerable number fall to earth each year, only less than two percent of them belong to the ‘irons’ category that can be used in watches. Often times, the size of these usable meteorite fragments is not even large enough for watchmaking.

But beyond the rarity and complexity of meteorite watches, the extraterrestrial metal has been symbolic of the infinite nature of time and space. For centuries, scientists, philosophers, religious figures and physicists have come to agree that meteorites are proof of eternity. Almost prophetic then, that the material be chosen to become the dials that we read time from.

From the 5 stunning meteorite watches we’ve chosen below, you’ll notice a vast difference in texture and colours. Like people, each meteorite is one-of-a-kind, which makes these timepieces even more covetable. 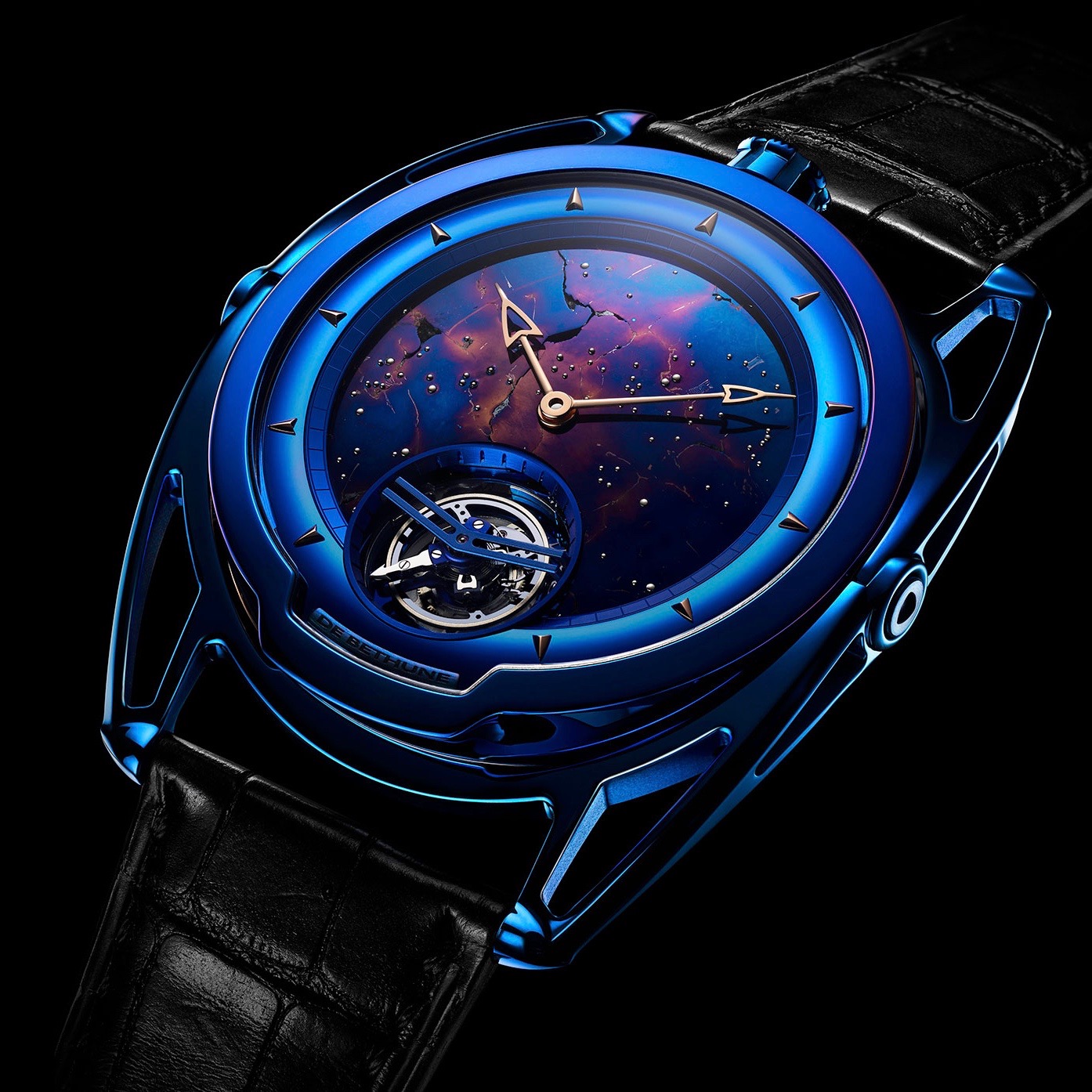 De Bethune sure knows how to put the cosmic rock to good use. Since securing some meteorite from Campo del Cielo — the site of the largest meteorite impact some 5,000 years ago in Buenos Aires, Argentina — the independent Swiss brand has translated its otherworldliness to several watches, most notably the DB28. Because the material is mostly iron, the meteorite heats up to become a rich blue hue, which is then polished and drilled to allow for white gold specks that represent the stars. To keep the focus on the dial, simple pink gold javelin-shaped hands and subtle hour markers are the only other details. Encased in blue titanium, the hand-wound calibre DB2019v3 sees a high-speed 30-second tourbillon that powers at 36,000bph. There’s no better way to underline the romance of perpetuality than with a piece of something that’s four billion years old. Utilising the Gibeon meteorite that comes from Namibia — which contains trace quantities of cobalt and phosphorous that give it a unique geometric crystalline structure — this Bovet timepiece is given an otherworldly makeover on top of the already remarkable open-worked tourbillon dial. In a limited edition of 39 pieces, the grand complication includes a seconds on tourbillon, retrograde date, month, leap year indicator, a power reserve indicator and a reversed hand-fitting. 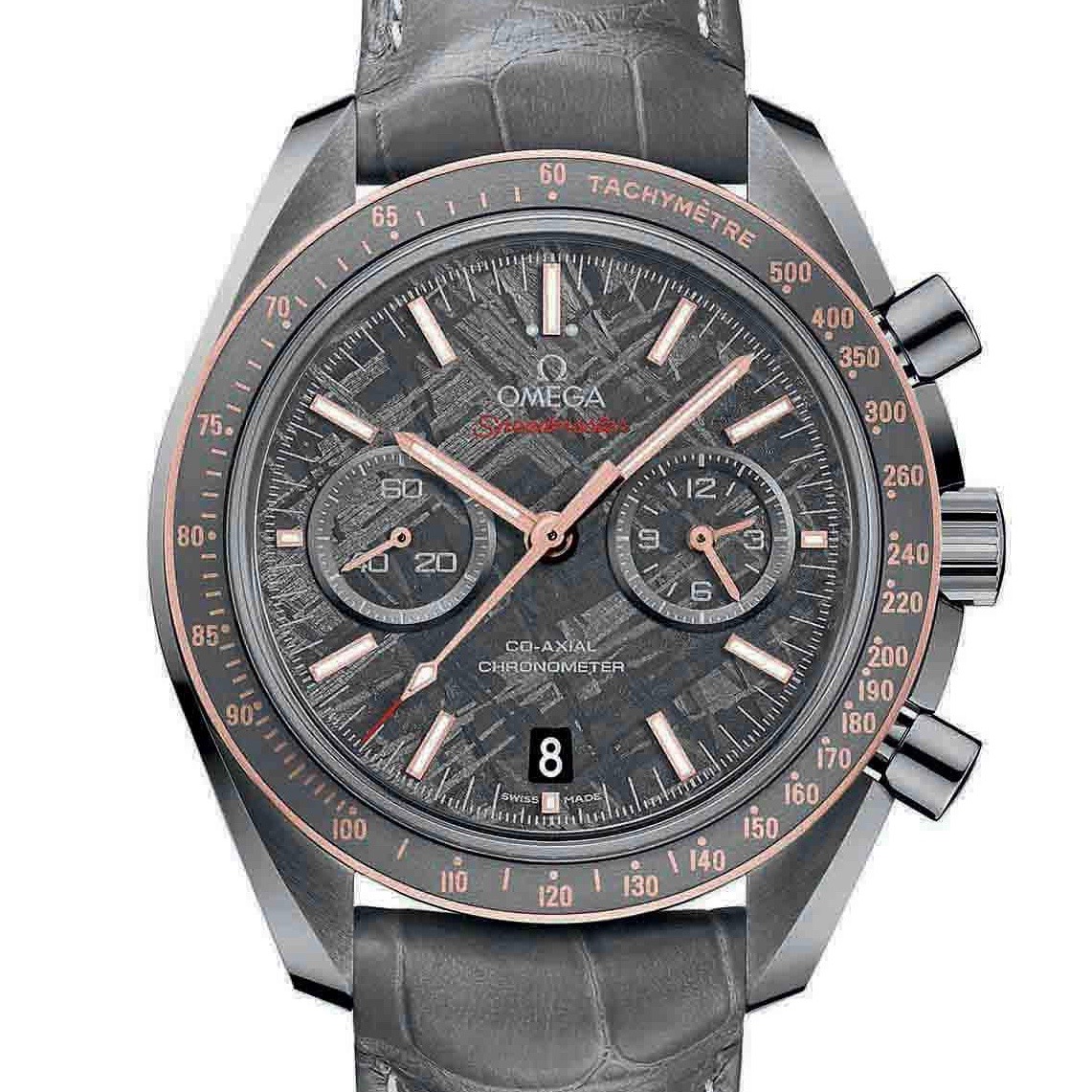 3
Omega Grey Side Of The Moon “Meteorite”

Because not everyone has had the good fortune of being blasted off into space, Omega has kindly put a piece of it into its classic: The Speedmaster. Coincidentally, this is also the same model that holds bragging rights as the first watch that made it to space, and then to the moon. At 44.25mm across, this watch borrows the same aesthetics as the other Co-Axial chronographs, only this time a dark grey textured meteorite takes centre stage within a Ceragold tachymeter scale. For legibility, the indexes and hands are Sedna gold alloy, though the Speedmaster logo stays true to the other next-gen Moonwatches with a contrasting red. 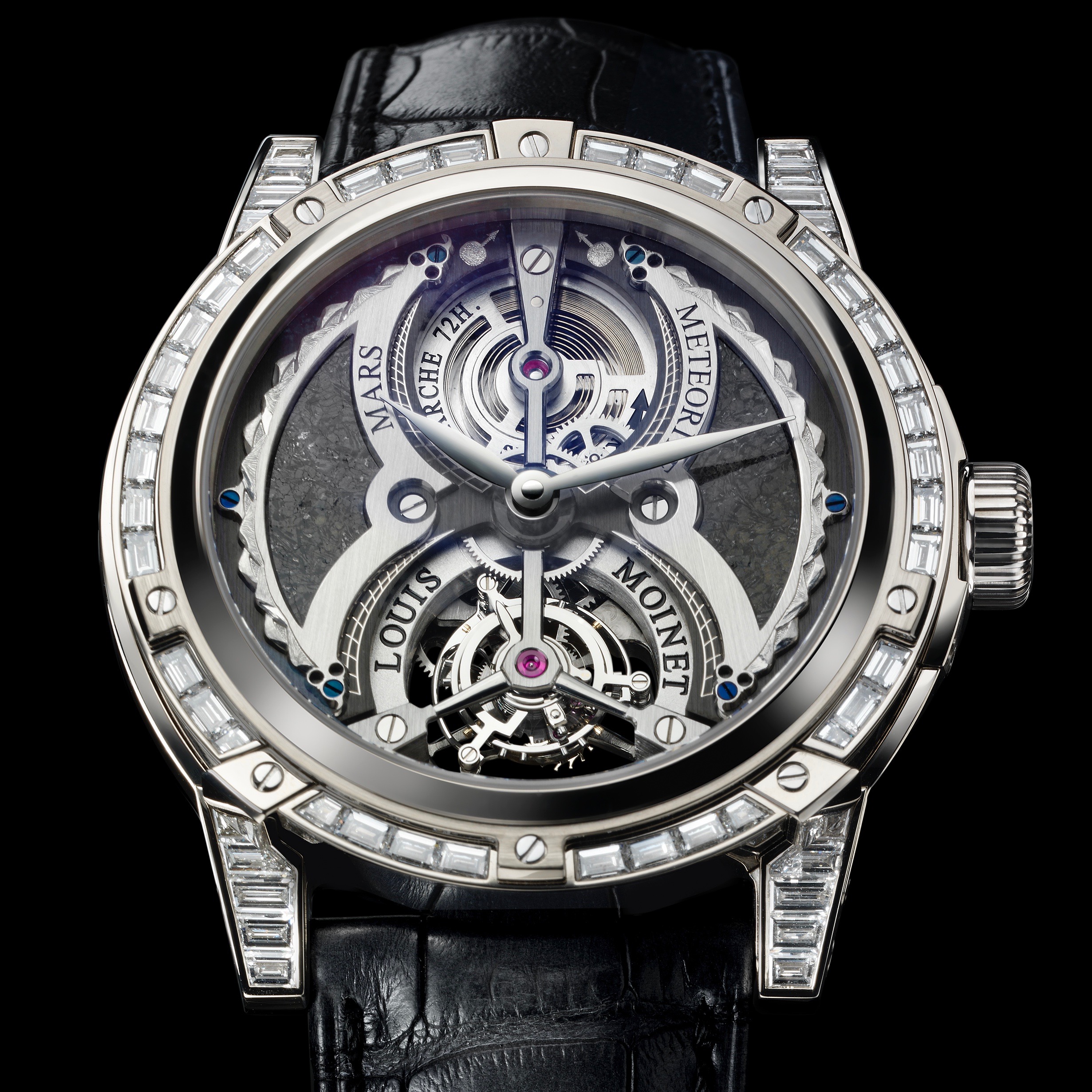 Sold as part of a set of four timepieces that costs a coronary-inducing S$6.68 million, Louis Moinet’s Tourbillon Mars dial sees a fragment of the Jiddat al Harasis 479 meteorite that was once a piece of Mars. This explains the price tag then, because Martian meteorites are extremely rare, and have a value 15 times more than gold at S$1,300 per gram. A unique shade of greenish-grey, the meteorite brings out the intricate open work architecture of the dial, which shows off the main spring barrel and tourbillon escapement. If that wasn’t dazzling enough, a generous 3.46 carats of 56 baguette diamonds border the bezel and lugs. For something a little simpler but equally out-of-this-world, Jaeger-LeCoultre has upgraded its Master Calendar with a bit of the precious metal. The dark grey dial — each deeply and uniquely textured — is home to the classic “triple calendar moon phase” style. The day and month indicator are presented in windows, while the subsidiary seconds dial and moon phase indicator has its own subdials. This watch is powered by the classic in-house made caliber 865 automatic movement, beating at a modern 4Hz with 40 hours of power reserve.