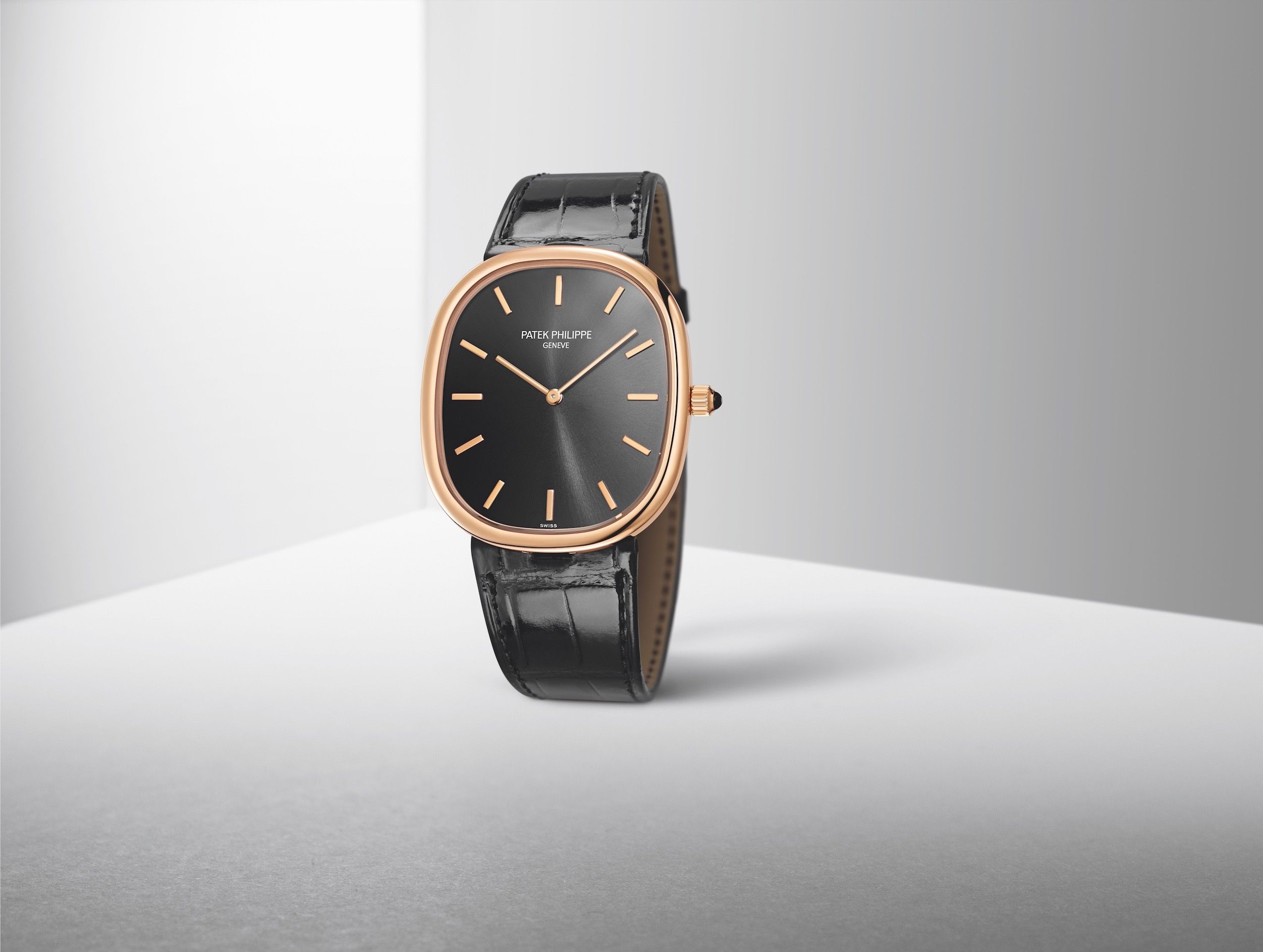 In the loupe: Patek Philippe’s Golden Ellipse is its best-kept secret

The modus operandi of high end watches today generally relies on a few things to ensure maximum wow factor and flair. This usually involves outfitting the watch with more than one complication, incorporating a blinding amount of bling, or utilising enamelling techniques you’ll struggle to pronounce.

But not Patek Philippe. Stripped of all ostentation, its Golden Ellipse has become an icon in its own right thanks to one simple design element: The shape of its case.

As the second oldest watch in the Patek Philippe family after the Calatrava, the Golden Ellipse is easily the brand’s best kept secret, having been overshadowed by its louder (and rounder) counterparts over the years.

The symbolic design was first fearlessly unveiled to the world in 1968, during a time of civil unrest. The US military’s Operation Rolling Thunder caused devastation in Vietnam, and civil rights and student movements in France brought the economy to a standstill for more than a week. Citizens of socialist countries began to speak out against the lack of freedom of speech and civil rights.

Calm within the storm

Patek Philippe’s Golden Ellipse was clearly an antithesis of the sign of the times. With a distinctly calm appeal, it had a face that only indicated the hours and minutes, and 12 indexes set against a blue dial with a mysteriously deep shimmer. The simplicity of the dial didn’t matter, because the highlight was its bold elliptical case.

A cross between a circle and rectangle, the unusual but balanced proportion is based on the principle of the Golden Ratio, an ancient — almost divine — formula that was first discovered by Greek mathematicians. Unsurprisingly, this attractive ratio (1: 1.6181…) is found in nature (the spiral arrangements of leaves), and used fervently in the works of decorated 20th-century artists and architects like Le Corbusier and Dali. The Great Pyramid of Giza, the human body, and even the Apple logo follow this enigmatic design philosophy.

By the late ‘70s, the Golden Ellipse had spawned 65 different versions in different sizes and precious metals, each lending the watch a distinctive edge. It came with different metal bracelets and leather straps, alongside a playful spectrum of dial colours. Then Patek Philippe got adventurous and fused it with other case shapes (like the Nautilus Ellipse version), and swapped the indexes for Roman numerals. The famous shape also found its way onto cufflinks, rings and lighters.

Its aesthetics weren’t the only factor that made the Golden Ellipse contemporary for its time. Originally fitted with a manually-wound movement, the extraordinarily slim watch was powered by the legendary ultra-thin caliber 240 in 1977, and automatically wound by a mini rotor that was completely integrated into the movement.

A ladies’ model in 1993 saw double ellipses when its strap lugs were rendered in the same shape as the case, and in 2008, a jumbo model in platinum with a sunburst blue-gold dial was revealed to celebrate 40 years.

Fifty years on, and the cult following of Patek Phillipe’s lesser-known golden child has shown no signs of slowing down, especially when the brand has unveiled two new versions for its anniversary.

The Ref. 5738/50P-001 Golden Ellipse is a 100-watch limited edition that sees an elaborate volute pattern hand-engraved against a contrasting black enamel primer in the 18k white gold plate.

A motif in the centre harkens back to the brand’s Calatrava cross logo, and the hours and minutes are tracked with delicate cheveu hands.

Other easter eggs include a commemorative engraving “Ellipse d’Or 1968-2018”, a crown set with onyx cabochon — the same colour as its enamelled dial — and a diamond set in the caseband at six o’clock, just like the rest of the brand’s platinum timepieces.

Its svelte silhouette can be credited to the same petite powerhouse that is the caliber 240. If anything, this should ascend to holy grail status within a couple of years.

The smaller Ref. 3738/100 in yellow, white, and rose gold might’ve been discontinued, but Patek Philippe’s “grande-taille” tradition lives on with yet another Jumbo version.

Unveiled at Baselworld 2018, the Ref. 5738R-001 Golden Ellipse marks the special occasion with a warm flourish of pink gold, its brilliance juxtaposed by a muted ebony sunburst dial and a matching onyx set within the crown.

Though intended as a dress watch, it’s easy to see how this timepiece will also fit into your weekend ensemble with its pared-down charisma.

Its hand-stitched shiny black alligator strap gets matching rose gold prong buckles rendered in the same shape as the case’s iconic silhouette, keeping the eye undistracted from the golden ratio at all times.

After all, few watches make such a case for having a flawlessly executed shape.

Limited Edition Watches Patek Philippe collector's watch Swiss Watchmakers in the loupe PATEK PHILIPPE Golden Ellipse iconic watches Golden Ellipse Golden Ellipse 50th anniversary
Shatricia Nair
Managing Editor
Shatricia Nair is a motoring, watches, and wellness writer who is perpetually knee-deep in the world of V8s, tourbillons, and the latest fitness trends. She is fuelled by peanut butter and three cups of coffee a day.
Motoring Wellness Watches Beauty Style
Sign up for our newsletters to have the latest stories delivered straight to your inbox every week.