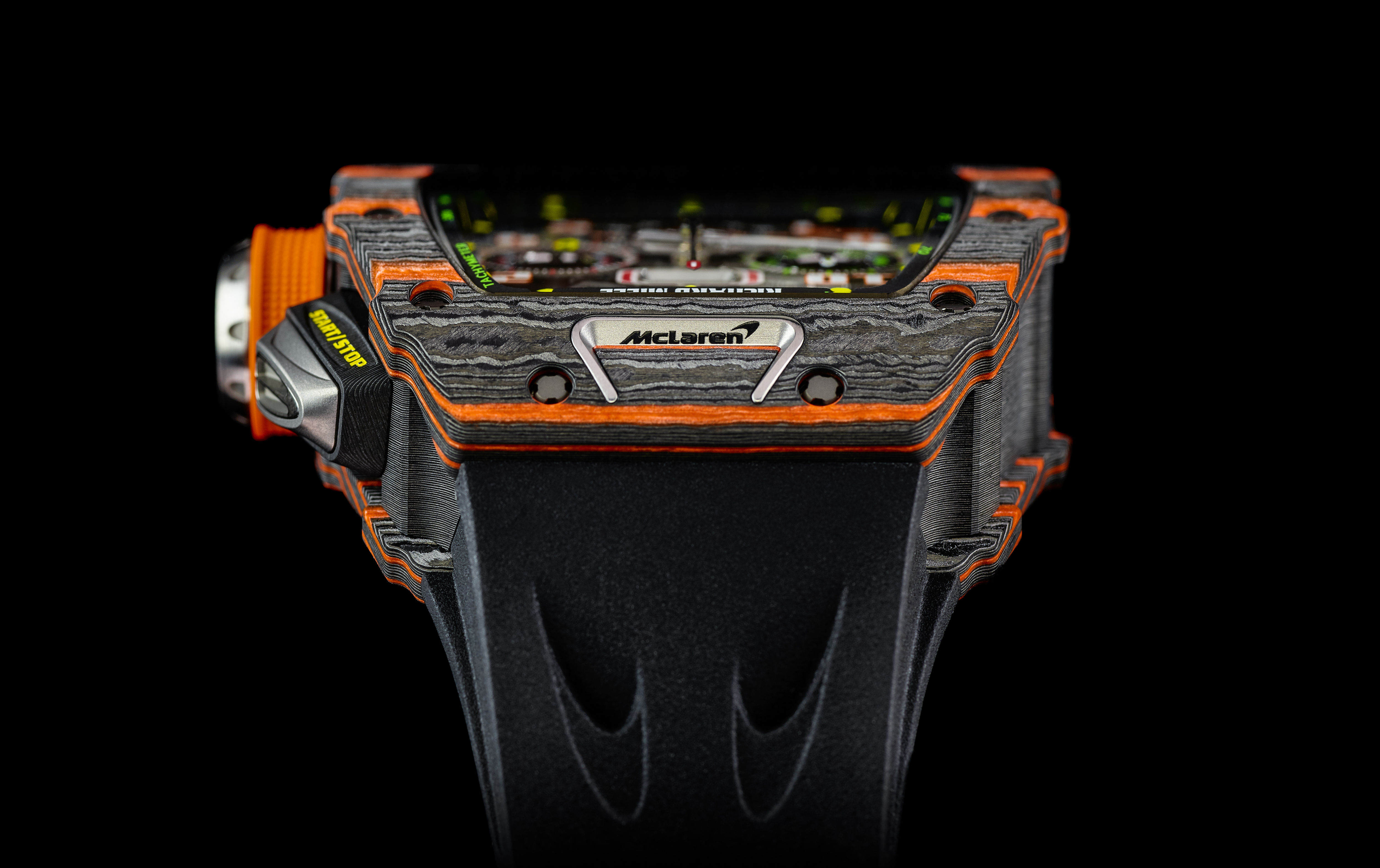 Exciting news for watch fanatics and gear heads alike: Richard Mille and McLaren Automotive revealed their first-ever jointly-commissioned timepiece, the RM 11-03 McLaren Automatic Flyback Chronograph, at the Geneva International Motor Show this week. Limited to just 500 pieces globally, the boldly-designed, technically-advanced watch will be priced at 180,000 CHF plus tax, and will be initially made available to McLaren Ultimate Series clients. McLaren customers will even have the opportunity to match their edition number of 1 to 500 of their McLaren Ultimate Series to the caseback number of their RM 11-03 McLaren.

This new release is the product of a 10-year partnership formed between the brands last year, which was first seen in the release of the RM 50-03 McLaren F1. Similar in look and feel, the RM 11-03 McLaren Automatic Flyback Chronograph takes the collaboration even further, and represents a joint effort between McLaren Design Director Rob Melville and Richard Mille Engineer Fabrice Namura. With design cues pulled from McLaren’s range of luxury sports and super cars, and the technical mastery of Richard Mille’s watchmaking, this makes for one very special timepiece.

Lightweight and resilient even in harsh environments, the case is constructed from cutting-edge materials — Carbon TPT® and Orange Quartz TPT® — and features a colour that is synonymous with McLaren. The titanium pushers on the case capture the design of the distinctive headlights found on the McLaren 720S; titanium inserts similar to the iconic McLaren F1’s air-intake snorkel adorn the watch’s bezel, bearing the McLaren logo. The crown, meanwhile, is shaped like a McLaren lightweight wheel, and the McLaren Speedmark logo appears on the rubber strap.

Inside the case is the automatic RMAC3 calibre, first launched in 2016, which features a flyback chronograph, with a counter that allows for the stopwatch function to be restarted quickly. Powered by two parallel barrels and a balance wheel with variable inertia, the movement has a 55-hour power-reserve, while the barrel construction allows for personalised winding that is adjusted to the wearer’s activity level.

The skeletonised, automatic winding movement, visible through the caseback, also includes a variable-geometry rotor offering hours, minutes, seconds, 60-minute countdown timer at 9 o’clock, 12-hour totaliser, and oversize date and month indicators. As is always the case with Richard Mille watches, this is a technical marvel, and one that car lovers will want to get their hands on.

McLaren Watches Luxury Watches Limited Edition Watches swiss watches Richard Mille Geneva International Motor Show collector's watches Swiss Watchmakers Swiss Watchmaking McLaren Automotive RM 11-03 Flyback Chronograph McLaren
Michael Alan Connelly
Head of Digital Content
A Chicagoan by birth and a New Yorker by habit, Michael has more than a decade of experience in digital publishing at leading titles in the U.S. and Asia. When he's not checking out Hong Kong's newest restaurants and bars or jet setting around the globe, you'll find him hanging out with his dog Buster and enjoying an Aperol Spritz.
Travel Hotels Restaurants Cocktails Culture Italy Art Music Cheese
Sign up for our newsletters to have the latest stories delivered straight to your inbox every week.