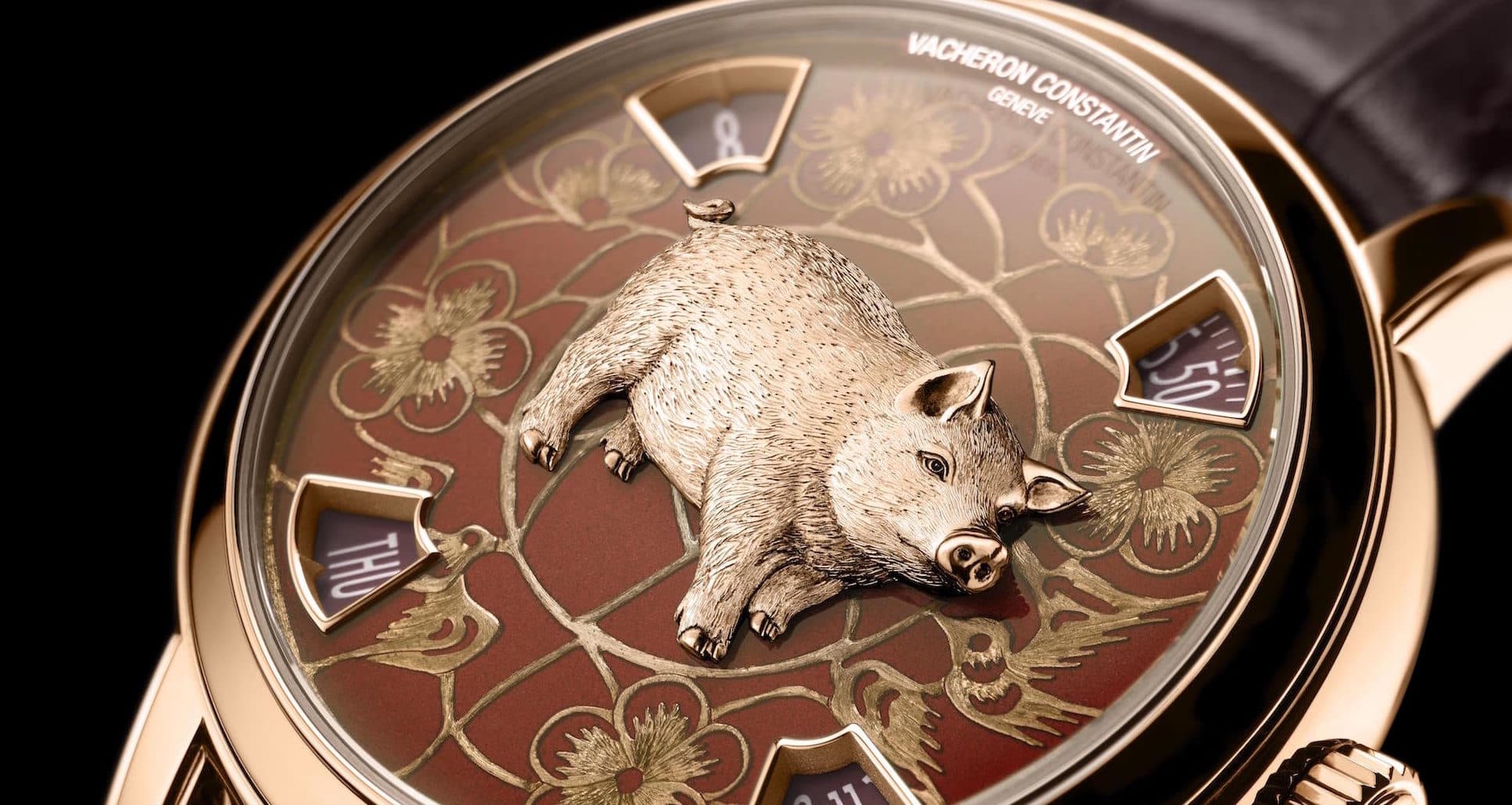 5 luxury Year of the Pig watches worth pigging out on

It’s that time of year again. We’re decking the halls with red and gold garlands, we’re dressed up to the nines in bright and bold garments, and we’re keeping an eye out for the drop of a series of timepieces much unlike any other. That’s right – the Lunar New Year and the Year of the Pig will begin on 5 February, and with it comes the annual slew of charming Year of the Pig watches.

After all, it’s slowly becoming a kind of timepiece tradition. Every year, a select handful of watchmakers unveil limited edition watches themed around the auspicious Chinese Zodiac animal, incorporating it into their designs with much creative flair. For 2019, the Year of the Pig watches embrace the spirit of the prosperous animal through glimmering red details, golden accents and imaginative horological craftsmanship.

From Panerai to Piaget, read ahead for our top picks of the minute, and usher in the new year in style. It’s time to release the beast (well, the babe). Vacheron Constantin Métiers d’Art The Legend of the Chinese Zodiac

There’s plenty to love about Vacheron Constantin’s Chinese Zodiac Métiers d’Art timepiece (approx. THB 3,925,000), and much of it goes beyond what first meets the eye. Honouring the crossroads between Eastern and Western artistic culture, the dial allows for much creative expression, with a hand-engraved pig taking the centre stage within it. In the background, a classic Chinese foliage motif is seen seemingly floating over the dial in a delicate tribute to Chinese emblems, and only upon a second glance does it become apparent that there is a complete absence of hands. Instead, four apertures show the hours, minutes, days, and dates, allowing for a completely hands-free reading of time. Available in a platinum or 18K pink gold version, the two new creations come in a series of 12 models each, combining the technical excellence of Caliber 2460 G4 with serious artistic savoir-faire. Tasteful and intriguing (but then again Vacheron Constantin knows no less). Quite possibly the sweetest way to usher in the Year of the Pig, Piaget’s pig-themed Altiplano (price on request) manages to balance a classic appearance with a painstakingly cute motif within one timepiece. The 38mm watch comes with an 18k white gold case set with 78 brilliant-cut diamonds, and the adorable star of the dial comes by way of a cloisonné enamel pig motif, cheekily peeking at its admirer. Available in a limited edition of 38 individually numbered pieces, the ultra-thin watch comes with a black alligator strap and is easy to wear (and even sweeter to flaunt). 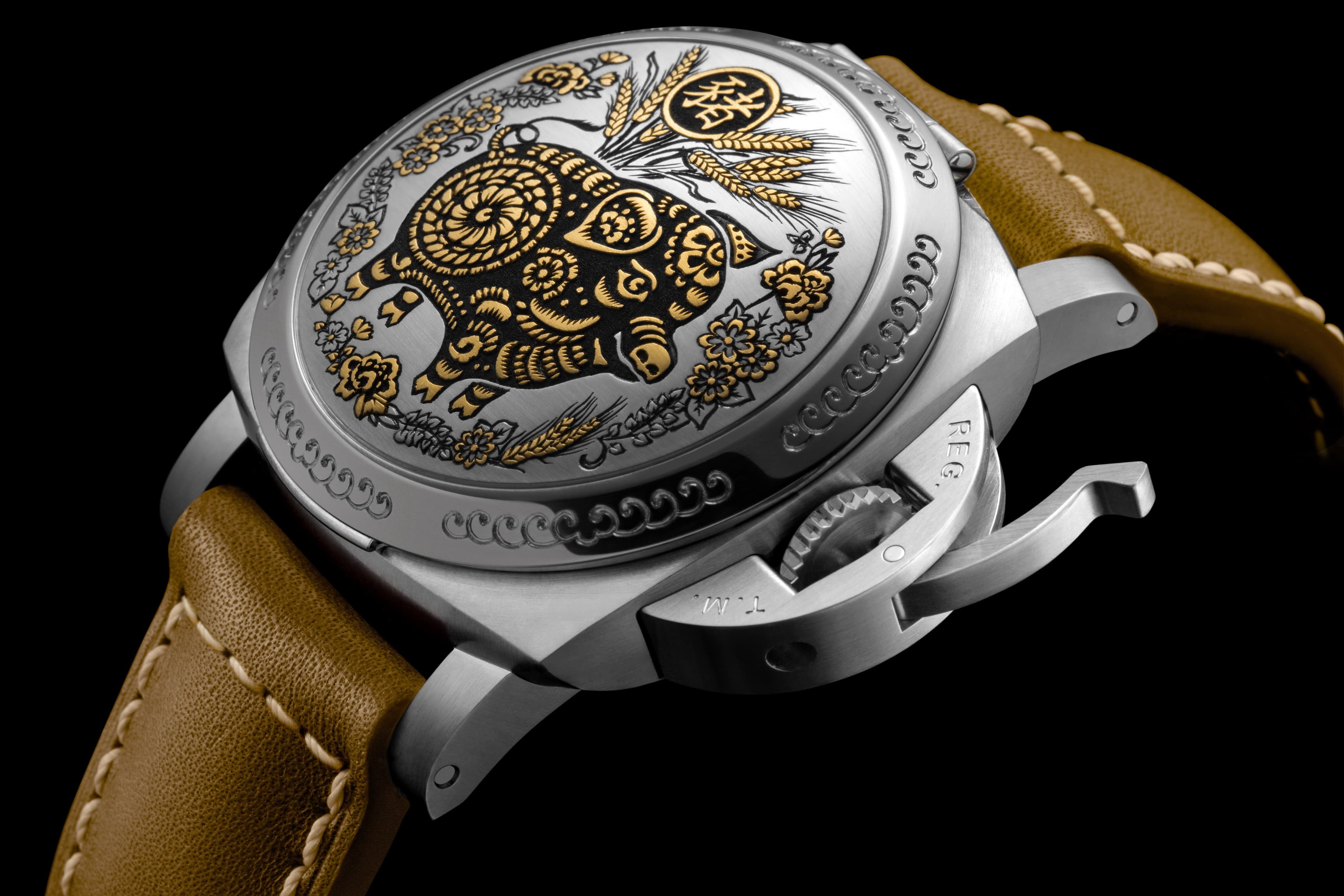 Panerai has been releasing Chinese Zodiac-inspired models since 2009, and for its eleventh rendition, the Italian watchmaker boasts intricate Sparsello engravings once again. Limited to a special edition of 88 pieces, the cover of the Luminor Zealand 44mm (THB 857,200) is adorned with an image of the pig in the style of traditional Chinese iconography, surrounded by an auspicious floral design. On opening the engraved cover, a simple and sophisticated grey dial is revealed, featuring Arabic numerals, linear hour markers, and luminous dots in classic Panerai form. The movement of the timepiece is the Neuchatel-produced P.9010 automatic caliber, with a power reserve of three days. Straight to the point with attentive design accents, the timepiece also comes with an interchangeable rubber or soft brown leather strap. Housed within a 18k red gold case, Jaquet Droz takes a more rustic route with its special Chinese New Year Petit Heure Minute Pig (price on request), featuring an Ivory Grand Feu enamel dial with a miniature painting of a pig in a field. Available in a 39mm men’s version or a 35mm women’s version with 160 brilliant-cut diamonds, the timepiece features the Jaquet Droz 2653 P. self-winding mechanical movement, with off-centred hours and minutes as a charming touch. The strap is a rolled-edge brown alligator leather strap, completing the overall look and feel of this classic and homely pig-themed timepiece. Did you know that pigs can swim? Italian fashion powerhouse Gucci certainly does, welcoming the Year of the Pig not only with an incredibly vast ready-to-wear collection and campaign, but also with this 40mm dive watch (approx. THB 51,460). Incorporating the characters from Disney’s Three Little Pigs into its dial, the playful rendition is an extension of the designs from Gucci’s Cruise 2019 line. The red dial depicts the three cartoon characters at its centre, surrounded by a yellow gold PVD and black rubber case. The black rubber strap hones the signature of a true dive watch, and whilst we thought pigs would fly before we spotted cartoon characters within a diving timepiece, it’s a joyfully anticipatory message for the new year. It’s going to be a great one. It’s time.

Watches Gucci Luxury Watches Piaget Vacheron Constantin Panerai Jaquet Droz Chinese New Year Lunar New Year Year of the Pig
Lisa Gries
Creative Content Director, Bangkok
Lisa loves to travel, and is always on the lookout for the world’s best nap spots. She’s a serious Asian art history nerd, and has a knack for languages and coffee table books. She hopes to publish her own novels one day, one of which will likely be called ‘All The Great Conversations I Had In A Bangkok Speakeasy.’ It’s a work in progress.
Travel Drinks Dining Watches