Home > Travel > Destinations > How many of these famously beautiful beaches in Asia have you visited? 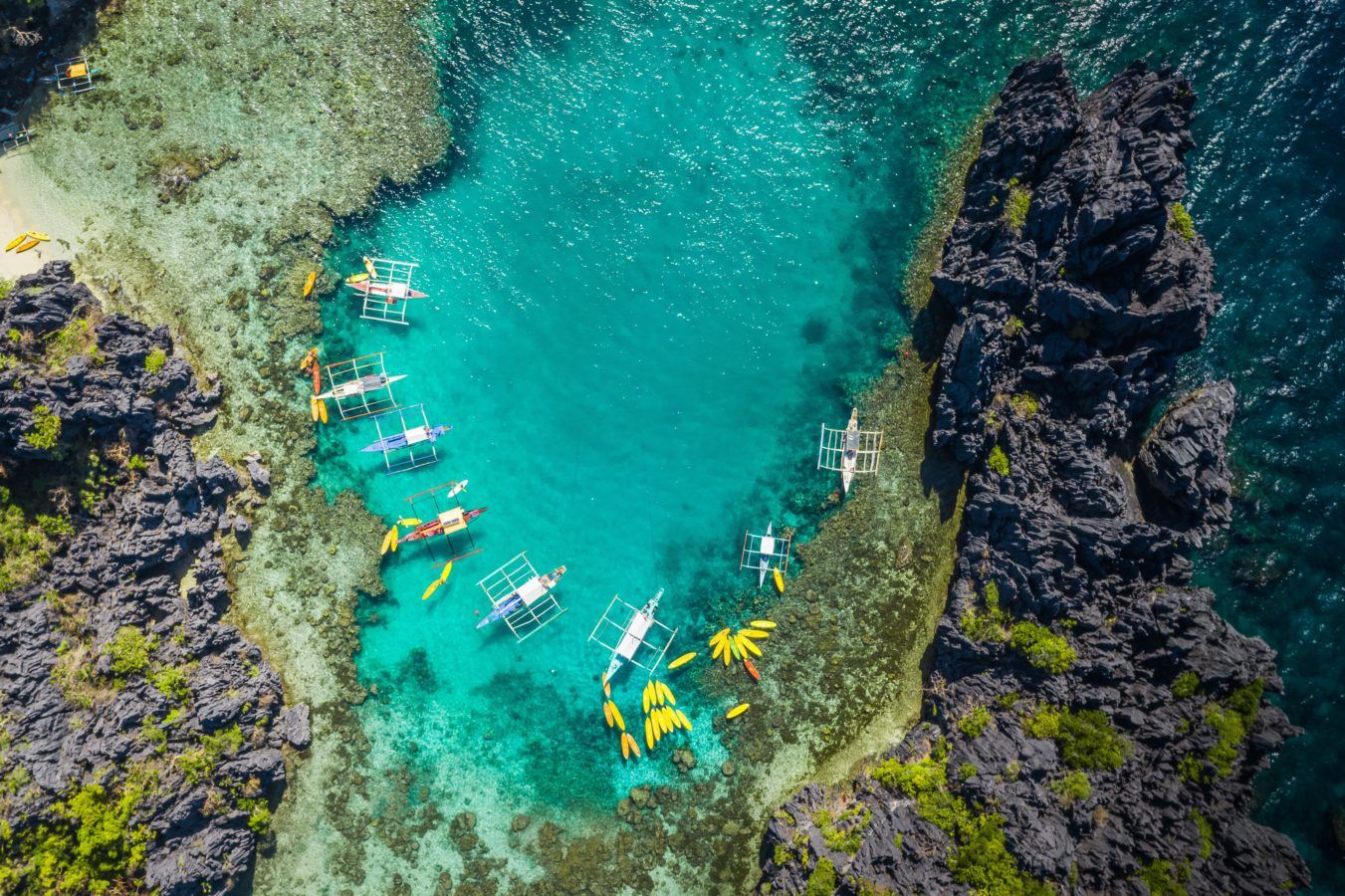 Travel
How many of these famously beautiful beaches in Asia have you visited?
Share this article
Next article

If you need somewhere to mentally teleport yourself to today, read right on.

Can you think of a more relaxing day than one spent lazily at the beach? Soft white sand, the gleaming ocean, and tall trees for shade — pure bliss.

We’ve shortlisted some of the most beautiful beaches in Asia to bookmark for a  sunny day soon, when travel is once again safe and allowed. Don’t forget to pack good sunscreen.

If you are in Vietnam, there are several beautiful beaches you can visit and one of them is Bãi Đầm Trầu. Why? Because it receives less harsh sunlight than other areas in North Vietnam. Sunbathers can laze around for a long time in comfort. The water here is cool and as clear as crystal — perfect for a dip. Looking towards the west, the beach gives an outstanding view of the setting sun which paints the clean sands golden yellow. Due to Côn Đảo being an island separated from the mainland, the crowd is less.

The beach is next to the Cảng hàng không Côn Đảo airport. If the timing is right, you might witness an aircraft fly just over your head, making it a thrilling picture for your Instagram feed. Also near the beach is the Côn Đảo national park, one of the nine Ramsar sites in the country. Extremely rich in flora and fauna, the national park has the largest turtle population in all of Vietnam which includes the critically endangered hawksbill sea turtle and the vulnerable leatherback sea turtle.

The beach is located in the northernmost part of the main island of Luzon. It is famous for its white sand washed by clear water, merging to form a sort of natural zero-entry swimming pool. The west-facing beach also makes for a perfect spot for watching the sun go down.

The beach is lined with tall palm trees standing like sentinels, where you can rest on a hammock or in any of the cosy huts of the nearby resorts. Swimming, snorkelling, scuba diving and boating are a few of the activities you can indulge in here. You can also visit the Blue Lagoon beach, which is direct to the northeast of Saud beach on the other side of the island as the crow flies. It has the whitest sand in Luzon but is exceedingly crowded.

The most attractive part about this beach is the tall limestone cliffs around it covered by dense vegetation. Located on a little peninsula between Krabi and Ao Nang, it makes for one of the most picturesque natural sights. Railay West can be accessed only by boat, which also means that it offers a great degree of seclusion and boasts of an almost undisturbed charm.

Rock climbers love the place for the opportunity to scale the karsts. The view of the turquoise water from the top is indeed surreal. And those who love the waters more than rocks can go kayaking or standup paddleboarding (SUP) in the emerald lagoons sheltered by the cliffs. If you are an eager explorer, there are caves hidden within the limestone formations and beaches such as Phra Nang and Ao Nang nearby. The vegetation and mangrove forests all around are home to monkeys and other species. Railay is an isthmus whose eastern side, Railay East, is known for its bars. So, you have your evenings taken care of.

Located in the Bay of Bengal, the Andaman and Nicobar Islands is one of India’s most famous tourist destinations. The Havelock Island, also known as Swaraj Dweep, is part of Andaman and home to the beautiful Radhanagar beach.

It is an almost two-kilometre-long stretch of soft white sand along the pristine blue waters. The alluring sight is too tempting for someone eager for a swim or a dive.

It is one of the country’s eight Blue Flag beaches and is mostly less populated than others. The shelter here is provided by thatch-roof cottages and the thick tropical vegetation. Head to the nearby cafes for a wide range of cuisines from around the world. Sunset views are fabulous and there is a sense of calm at the beach, which is ideal for yoga or meditation.

Those looking for some more adventure can take the hiking trail to Elephant beach on the northern side of the island. Though the 2004 Indian Ocean tsunami deeply affected the shoreline, it is still an amazing place to go snorkelling because of the reef located close to the shore.

On the southwest of the Nusa Penida Island is the spectacular Kelingking beach which is most famous for a geographic feature that has given the place its more popular name — T-Rex Bay. Steep, rocky cliffs jut out into the sea which when seen from a particular angle appear like the open mouth of a tyrannosaurus rex. The small white sandy beach has one end at the base of this feature.

The beach is secluded and requires you to descend the limestone rocks to reach it. The soft sand becomes all the more photogenic when the sun begins to set over the horizon. Take a swim in the emerald green waters but note that the currents can be strong. You can also just amble about the beach to the other end where a cave awaits you.

Water almost the colour of light emerald, powder white sand, and a small island location makes White Beach one of the most beautiful beaches in Asia. Tourists come here not only drawn to the natural beauty but also for the water sports activities, spas and shopping sprees. There are numerous resorts and restaurants, ranging from the most luxurious to affordable, close to the beach. An outstanding view of the beachfront can be seen from many of the hotels.

The water is calm, which makes it great for swimming and scuba diving. Adventurers can opt for kite surfing or take a trip in the beautiful paraw sailboats.

Located on the western side of the island, the four-kilometre stretch is protected from the winds that blow particularly strongly elsewhere on the island and adjoining areas. It is crowded almost all year long but is never unclean. 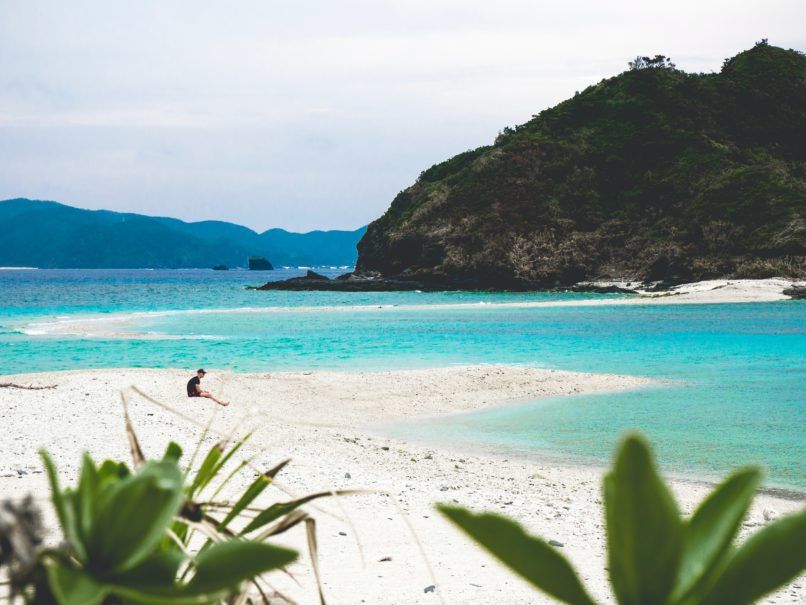 Renowned for its perfect white sand, sparkling clear blue water and a shoreline stretching seven kilometres, Yonaha Maehama is one of Japan’s most beautiful beaches. Visited by both local and foreign tourists for its Insta-worthy sunset scenery, the beach also offers many activities.

Those who want to take it slow can rest on any of the sun parasols and deck chairs. Thrill-seekers can rent a jet ski and skim the rolling waves or go the easy way with a banana boat. Those looking to rejuvenate can go for a swim. If you are visiting towards the end of April, you may be able to witness the swimming section of an annual ‘Strongman’ triathlon which is hosted here.

Yonaha Maehama is the largest beach on the island but not the only one. If you go to the nearby Yoshino beach, you can snorkel in the coral reefs full of rich marine life which are just metres from the shore.

And when in Okinawa, do indulge in delicacies such as soba noodles and stir-fried bitter melon known as goya chanpuru.

If are at the southern end of the island nation, you will be welcomed by the rolling waves of the majestic Indian Ocean at this breathtakingly beautiful beach. Mirissa is considered by many as one of the best beaches in Sri Lanka. The cleanliness of the beach and the tall coconut trees forming a barrier along the shoreline will instantly captivate you. The water, a mix of blue and green, is clean enough for swimmers. Those who don’t want to take a dip can take a leisurely stroll on the soft sand while enjoying fresh coconut water and listening to the sound of the waves crashing on the nearby rocks.

Surfing is a big draw here and those learning to master the waves often flock to Mirissa to rent a board. At one end of the beach is a famous vantage point known as Parrot rock. This small rocky outcrop, which can be reached during low tides, offers an unparalleled view of the sunset. A stone’s throw away is the coconut tree hill where you will definitely want to get a picture taken amid the tall trees. For a great afternoon party, head to the Doctors House for food, drinks and live music.

If you are visiting anytime between November and March, book a guided tour that will take you into the ocean to spot whales. The gentle giants in their natural environment are one of Mirissa’s biggest attractions.

Cenang beach can be spotted clearly from above when the aircraft lands at the Langkawi International Airport. The two-kilometre-long white sand beach is the island’s longest and most famous. Running along the western coast of Langkawi, the beach is considered by many as the best in Malaysia. Palms and coconut trees straddling the shoreline, sunbeds on the beach, duty-free shops, and several restaurants and bars for tourists are all part of the experience here. Snorkelling, jet skiing, boat rides and parasailing are just some more amazing activities you can indulge in.

Two nearby islets can be seen from the beach and one of them, Pulau Rebak Kecil, can be accessed by foot during low tide. The rays of the sun going down over the calm waters of the Malacca Strait and just behind the islands create an effect that makes the beach look like a piece of a golden crescent. You can also visit the Tengah beach which is located next to Cenang.

Koh Rong is a picturesque island off the coast of Cambodia’s Sihanoukville province. The entire island is an unspoiled tropical paradise and has numerous white-sand beaches measuring close to 40 kilometres in total. Of these Lonely beach stands out for at least one particular reason — its relative isolation from the rest.

Located north, the beach is known for dazzling clear turquoise-green waters. In the night, fluorescent plankton illuminates the water creating a starry landscape at your feet. You can rest in small hut-shaped bungalows, nestled in the forested landscape next to the beach. The rustic setting is indeed picture perfect but due to its location, the facilities are also scarce. There are no shops, ATMs or Wi-Fi. But anyone who has been here, found it to be a paradise.

Travel Beach Wanderlust Destinations Content Hub Hidden
You might also like ...
Beauty & Grooming
8 beach makeup essentials for your next trip to the islands
Style
Best Dressed in Bangkok: “Beach Please” Edition
Travel
Where to stay in Samui, according to your vibe and your tribe
Travel
Phuket is re-opening to vaccinated tourists this July
Manas Sen Gupta
Manas enjoys reading detective fiction and writing about anything that interests him. When not doing either of the two, he checks Instagram for the latest posts by travellers. Winter is his favourite season and he can happily eat a bowl of noodles any time of the day.
Travel Culture Entertainment Food
Sign up for our newsletters to have the latest stories delivered straight to your inbox every week.