Home > Travel > Destinations > Inside Annabel’s, one of London’s most legendary nightclubs 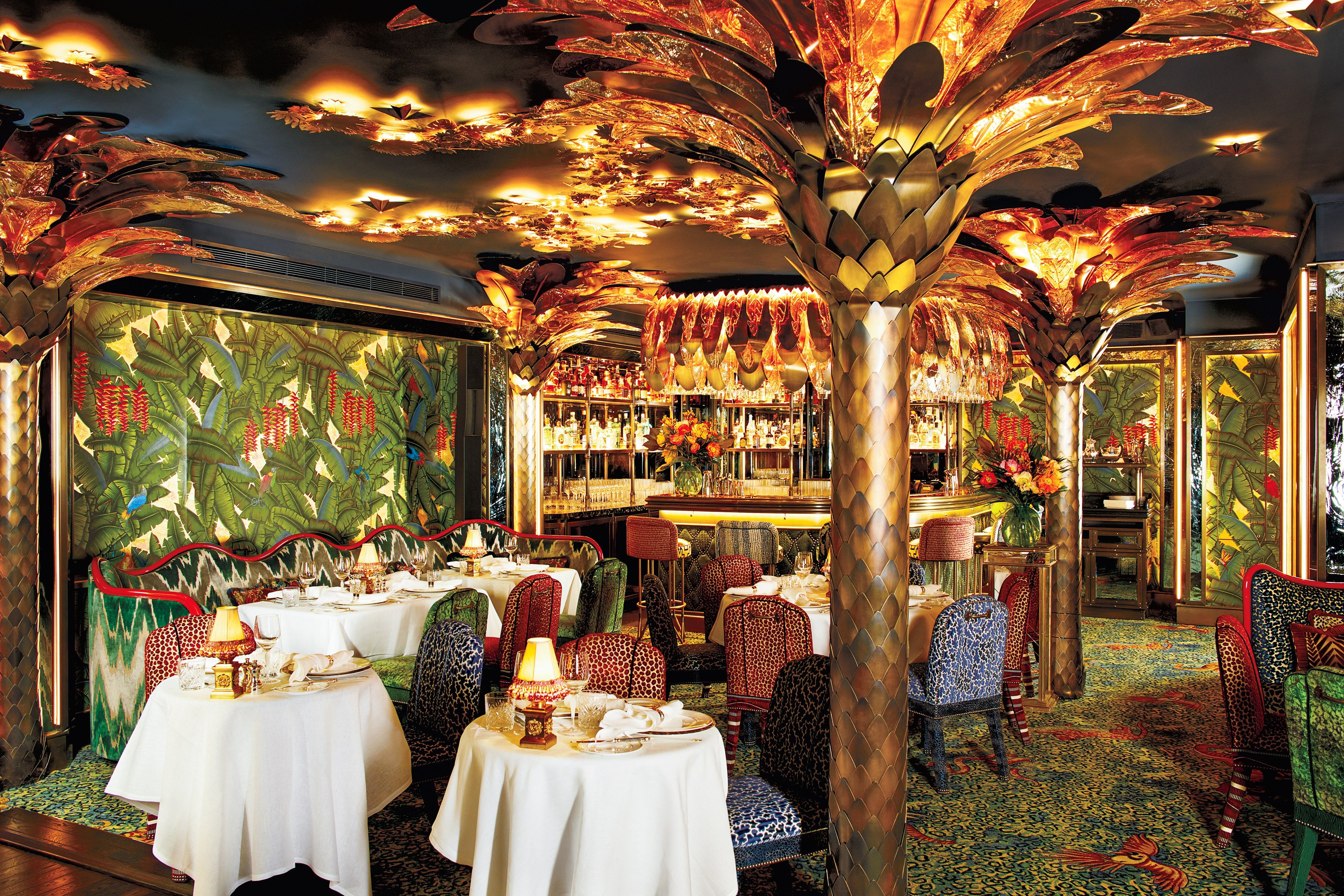 Inside Annabel’s, one of London’s most legendary nightclubs

When you enter Annabel’s and its Guest Experience Manager mentions that photography within certain spots is prohibited to protect the privacy of the customers within, you get a good idea of the sort of clientele the private members’ club receives.

Not that the place tries to be discreet. For one, the late-night bastion is located at 46 Berkeley Square in Mayfair (for perspective, that’s the most expensive plot on the London Monopoly board). Secondly, the grandiosity of the Georgian mansion is quadrupled by a dramatic smothering of fresh roses — all four stories of it — making the newly reopened venue all the more Instagrammable, especially after a £55 million makeover that lasted over two years from 2015.

A past equally gilded

As far as nightclubs go, not many see a guest list as famous as Annabel’s. You were just as likely to see Mick Jagger or Madonna as a genuine blue blood shimmying shoulders on the dance floor within. Its most exclusive guest – the Queen – dropped in for a gin martini in 2003, and till date, Annabel’s remains the only nightclub Her Majesty has – to public knowledge – ever visited.

It may be part of the new wave of London members’ clubs that’s surfacing across town, but Annabel’s has always been way ahead of its time. The original Annabel’s nightclub was first opened in 1963 by the late Mark Birley, naming it after his wife Lady Annabel Vane Tempest-Stewart. It was situated just a few doors up from its current abode, at an old coal cellar beneath the Clermont Club — a gambling den once graced by the likes of Roger Moore and Princess Margaret — and was funded by 500 of Birley’s friends to sustain the fashionable address.

It didn’t take long for Birley’s exquisite taste to lure the louche and glamorous into the hallowed doors of Annabel’s, making it the spot to be seen at for cocktails and cigarettes after dinner. Its decor was typically English, with candlelit lamps lighting up the banquet room with its countless dog and horse paintings. Red velvet festooned the furniture, while the dance floor — a cramped after-thought, almost — was concealed at the back with but a few disco lights. The white-tuxedoed staff knew everyone’s name; it was almost like being at a private soirée rather than a nightclub.

Opening during a time when visionary bohemians were being embraced in favour of old aristocrats meant that it wasn’t strange to see Diana Ross in the same room as an earl. Sartorial guidelines dictated that wearing a shirt, jacket and tie was recommended — if you wanted to get past the doorman. That being said, creative dressing was very much a big part of being at Annabel’s, a direction that’s now even more encouraged thanks to Derek Blasberg. He joins the likes of Charlotte Tilbury and Mario Testino in a freshly-appointed legion of committee members at Annabel’s, adding to his already impressive resume that includes being a contributor for Vogue and Vanity Fair, fashion editor, New York Times best-selling author, and host of CNN Style.

Jeans and trainers are no longer prohibited, though he gladly points out that the former should not be distressed and the latter “should not look like they’ve actually been used to play sports”. Other sartorial no-nos include “shoes that women can’t walk in. Hats at night. Sunglasses at night, even if they’re prescription. Nipples on women. Nipples on men, especially”. The list continues with the obvious: “Spiky hair. Men in shorts. Women in shorts. Exposed bra straps. Visible panty lines. Sports bras.” Couple dressing will also get you rejected.

If these are too many rules for you, remember that the Mayfair club has long been notoriously rigid in its rules and that you should not in any way try to challenge them — even if your wallet knows no boundaries. The Beatles, Blondie and Stevie Wonder were famously turned away in the past for not adhering to decorum.

But what lies within the new incarnation is well worth getting dressed up for. Heck, it’s even worth getting a suit tailor-made for. Designed by the prolific Martin Brudnizki — who also worked on the glitzy Sexy Fish across the street — Annabel’s is now worlds apart from its cosy vaulted coal cellar past.

A new world within

Spread over four floors and over 26,000 square feet are restaurants, two private dining rooms, bars, a cigar salon, spa, workspace in the attic, and nightclub in the basement. For such an iconic destination, Brudnizki’s task was tremendous, but his forte lay in incorporating contemporary cues with the classical, creating a sort of dream-like, Alice in Wonderland atmosphere many others struggle to achieve.

A real Picasso painting welcomes you at the reception, and while the entire building and its maze of rooms are a masterpiece worth getting lost in, the most Instagrammable one is the ladies’ powder room.

The famous spot is a kitsch explosion of pink, with hand-embroidered pink silk panels on the walls and accompanied by literally thousands of rosied flowers on the ceiling. Washbasins are carved out of pink onyx, while gold swans serve as taps.

Elsewhere, Brudnizki has made no efforts to hide the Birley-inspired joie de vivre — which has exploded into the decor. Every spot is furnished to theme. The Elephant Room has hand-painted de Gournay wallpaper which portray elephants with maharajas. The Jungle Room sees tigers, owls, and other wild creatures peek out of bespoke carpet and walls — if you look closely.

The Flower Room is a self-explanatory space where another thousand or so flowers flourish out of the walls as intricate plasterwork, now hand-painted and embellished, and to further the enchantment, a winged life-size unicorn hangs suspended near the stairs.

In the Legacy Bar, an emerald verdigris marble floor lights up even more Picasso and hand-carved glass on the walls, as its most esteemed VVIPs (all 100 of its Legacy lifetime members) chat within the confines of the uber-private room.

Elsewhere, two floor-to-ceiling chandeliers are copped from Audrey Hepburn’s Paris When it Sizzles, and in the nightclub, gilted palm trees harken back to the foliaged chambers of the Vauxhall Pleasure Gardens — the 18th-century’s answer to nightlife and debauchery.

But Annabel’s fauna theme fully blossoms in the The Garden, an all-weather courtyard terrace that could rival the recently concluded Chelsea Flower Show. It’s fitted with a glass ceiling that extends in two minutes flat, should one of London’s unpredictable showers strike. There’s also staff dedicated to taking three different weather reports daily to analyse the conditions for the terrace, if you worry about ruining your blowout.

There’s an ice-carver whose sole job is to carve ice cubes of different shapes for cocktails — which are, by the way, served in £200 Lalique or Baccarat crystal ware. Annabel’s also has a dog walker, who looks after members’ prized pedigrees.

Every room is just as bound to render you as speechless as the next, but Annabel’s is designed precisely to astound. Call it the Studio 54 of London, if you must, but the experience is twice as indulgent as you’ll imagine it to be. However, beneath all the magic and glamour still lies the same cloistered intimacy that made the original Annabel’s at 44 Berkeley Square such a success.

London private members' club Annabel's Annabel's Mayfair Annabel's London London nightclubs London nightlife best bars in London most instagrammable
Shatricia Nair
Managing Editor
Shatricia Nair is a motoring, watches, and wellness writer who is perpetually knee-deep in the world of V8s, tourbillons, and the latest fitness trends. She is fuelled by peanut butter and three cups of coffee a day.
Motoring Wellness Watches Beauty Style
Sign up for our newsletters to have the latest stories delivered straight to your inbox every week.