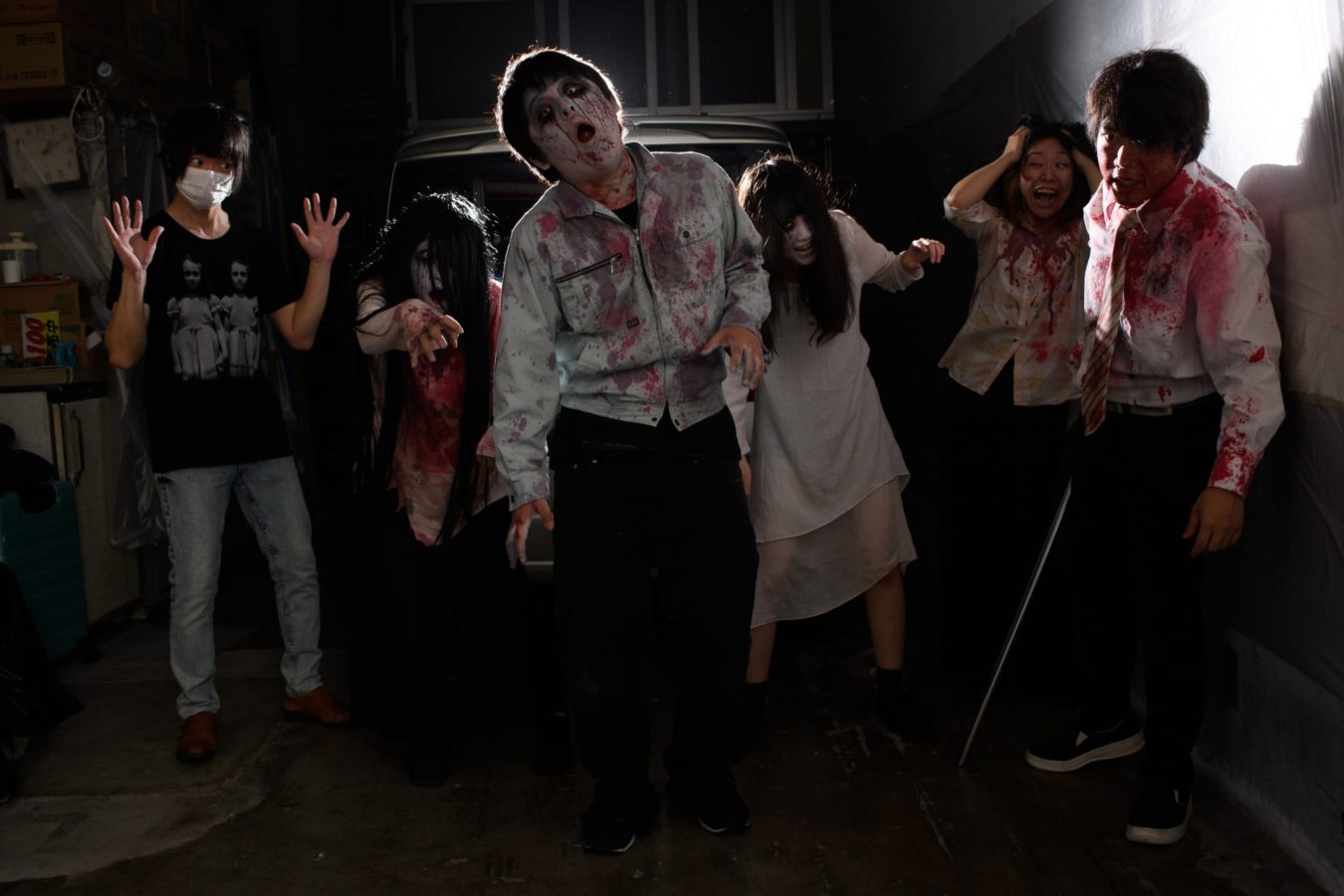 As we hear the cars honking, bloody murder and rampaging zombies bring the horror we’ve always been running away from.

But this drive-in haunted house in Japan protects against the most terrifying enemy of all — Coronavirus.

Inside a car, guests can scream as loudly as they like, with no mask required, as hideous creatures daubed in blood swarm towards them.

In fact, the new format might even be scarier than a traditional haunted house, producer Kenta Iwana, 25, told AFP.

“At the drive-in haunted house, guests are confined in a car so they can’t escape the horror until the end,” he said.

“It makes it even more scary for them.”

Iwana came up with the drive-in solution after struggling with a string of cancellations as the coronavirus outbreak took hold.

“Orders for conventional-style haunted houses were cancelled one after another and we lost about 80 percent of our clients.”

The squad is usually hired to set up haunted house experiences at amusement parks and similar venues.

A normal experience might involve a windowless facility with actors playing ghosts quietly following visitors and whispering directly into their ears to scare them — all impossible in the age of coronavirus.

Iwana and his team Kowagarasetai — meaning “A squad wanting to scare” — initially tried to create coronavirus-compatible performances by wearing masks painted with fake blood and playing recorded screams rather than unleashing real ones.

But most of their events were cancelled anyway.

“We’ve even had Halloween events scheduled in October and November cancelled,” said Ayaka Imaide, 34, head of the squad.

Iwana, who quit university to become a ghost house producer, wondered if a drive-in format might work instead.

Ghost stories and haunted houses are popular forms of entertainment in Japan and are associated particularly with the summer, though the reasons for the link are unclear.

Kota Hanegawa, 28, plays a blood-soaked killer in the squad, though he admits he is not a big fan of scary things.

He says the new format — with the actors outside accompanied by a soundtrack and narration playing inside the car — has a few positives, particularly in terms of audience feedback.

“I can get very close to guests even though they’re behind the windscreens,” said Hanegawa.

“It’s interesting to see their reactions so close up, while keeping social distance.”

Imaide said she hoped the new format would help lift the mood of entertainers struggling during the pandemic.

“Maybe we should just not do anything and keep our heads down,” she said seriously, from underneath a full face of zombie make-up.

“I don’t know what the right thing to do is… But we want to continue offering a haunted house, even if it means we have to change the style a bit. We want many people to enjoy it, to enjoy being scared.”

Japan’s coronavirus state of emergency has already been lifted, and some amusement parks are slowly beginning to reopen, with restrictions on guests.

But the squad is moving ahead with its drive-in concept for now, and tickets for its first dates next month at a Tokyo garage have already sold out.

“Let out all your fears, that’s the way to enjoy it,” she advised.

Travel Japan Social Distancing Haunted House
You might also like ...
Culture
TikTok Travel: you can now visit Europe’s most famous museums through TikTok
Culture
A drive-in cinema is coming to Bangkok for your next hot date
Culture
Sports events after COVID-19: what will change?
Gear
How COVID-19 reshaped the landscape of online gaming
Staff Writer
Arts & Culture

Sydney re-opens to vaccinated tourists from around the world

An itinerary for Russell Crowe in Bangkok, based on his best movies

The world’s ‘smartest’ and most future-proof cities, ranked