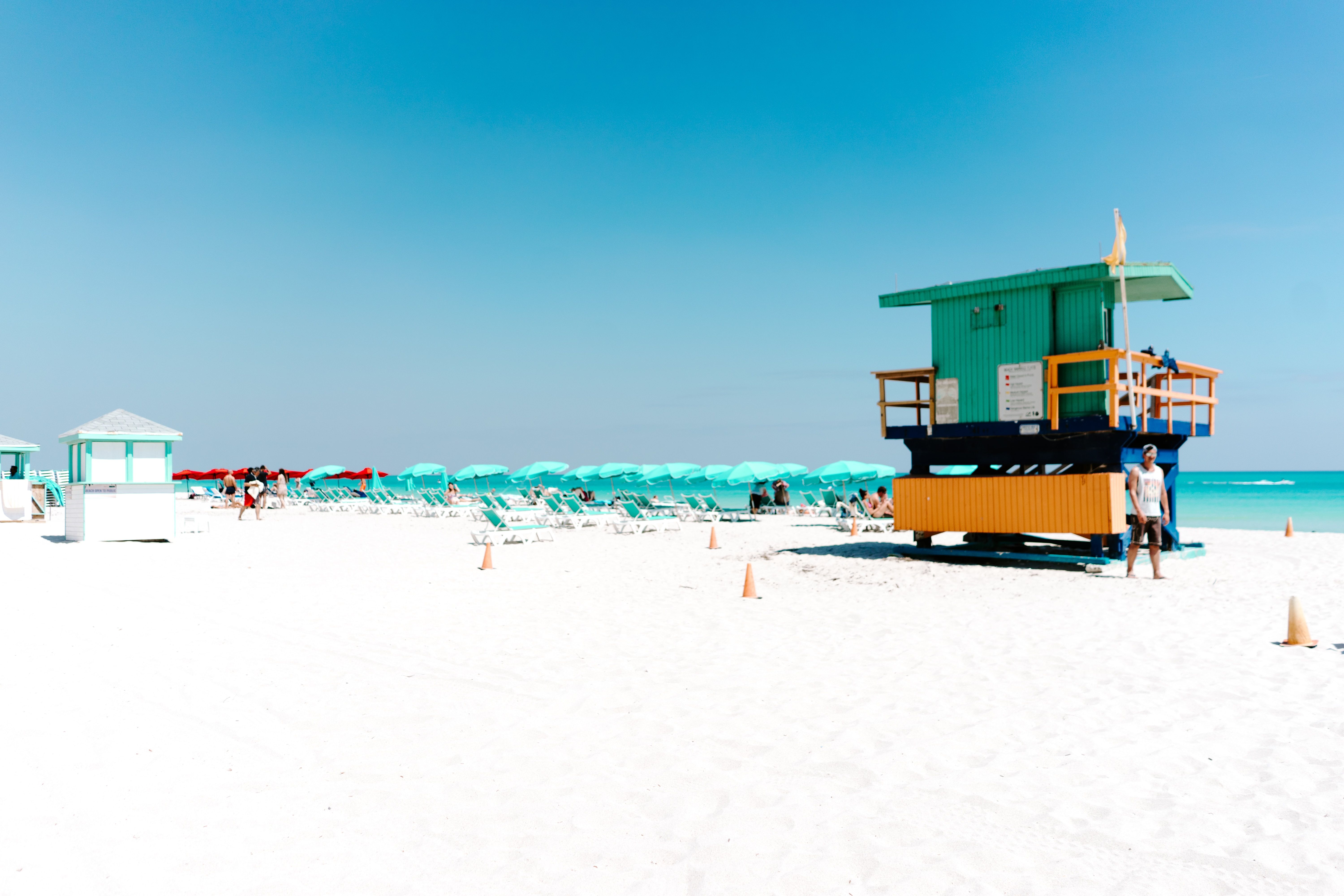 Is there anything as iconic as the palm trees that line Ocean Drive in Miami as you ride along in a cabriolet with the wind in your hair? Of course there isn’t.

Whilst many Americans may make fun of Florida, there’s no denying that there’s something very cool about the beachside retreat. Between Latin culture and a relaxed way of life, there’s plenty do and enjoy in Miami. From swanky hotels right on infamous Miami Beach, over to eco-friendly resorts and glamorous retreats, here we’ve put together a list of our favourite luxury hotels in Miami. Whether you’re planning a trip to the American West Coast soon or are simply looking for some travel inspo, these luxe escapes definitely bring that Miami heat. 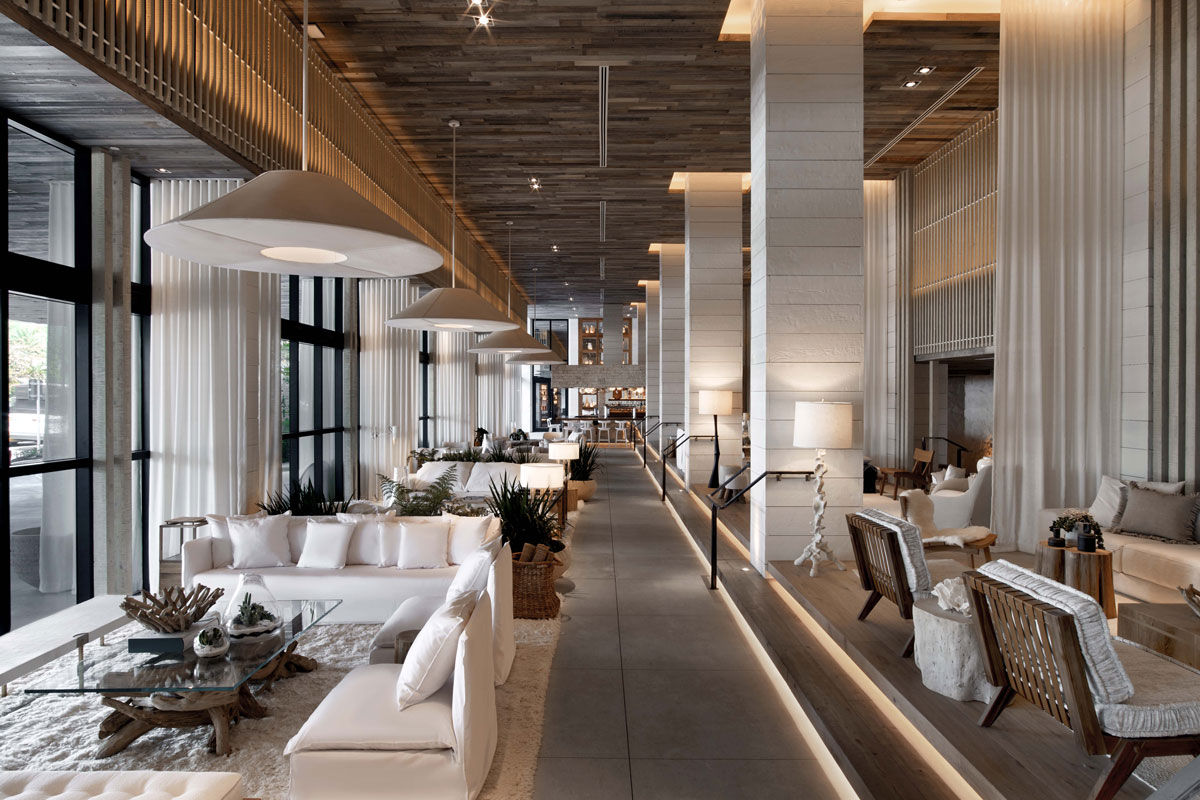 You might be heading to a holiday destination known for its vices, but that doesn’t mean you can’t still practice a sustainable holiday. Luckily, there’s 1 Hotel South Beach – luxurious, eco-conscious, and stylish. The bedding is made of organic material, there’s a 900-metre wall that’s filled with 11,000 local plants growing on it, and even paper brochures have been done away with, replaced by apps. There are 426 rooms on the resort with a zen vibe thanks to the handiwork of design firm Meyer Davis. Dine at Habitat, the sea-to-table restaurant with furniture made of reclaimed furniture. There’s also a boot camp-style gym in the hotel grounds as well as a Soul Cycle spinning studio – pretty apt, if you ask us. 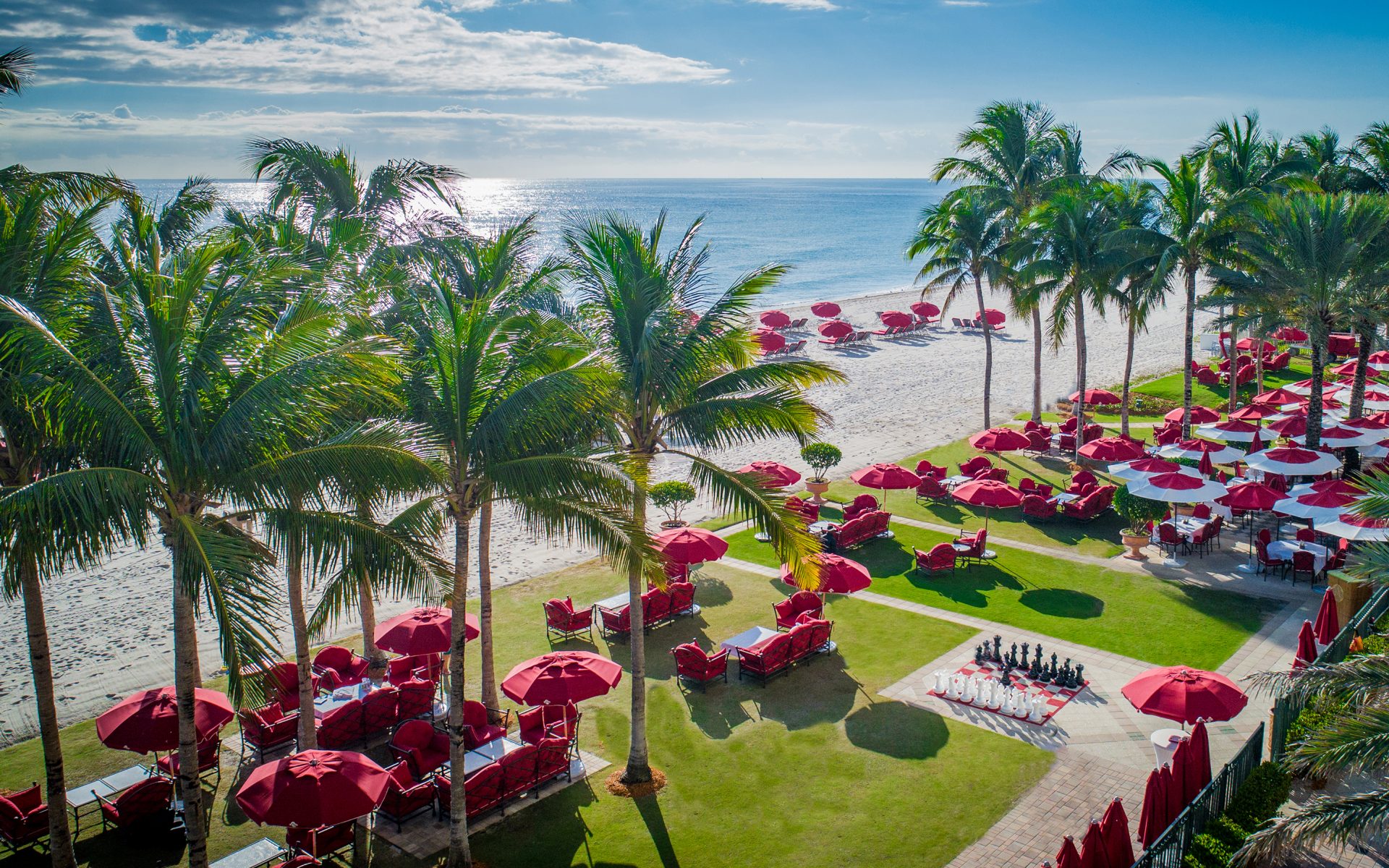 Acqualina Resort & Spa on the Beach

Those looking to seek respite from the crowds thronging Miami Beach will find respite in Acqualina Resort & Spa on the Beach, just 30 minutes away. The rooms are expansive and all come with views of the ocean or Intracoastal Waterway. As for pools, most hotels have two – at Acqualina, there are four and all boast oceanfront views. There are two fine dining restaurants on the property: Il Mulino New York for sumptuous Italian fare and AQ Chop House for modern American cuisine. 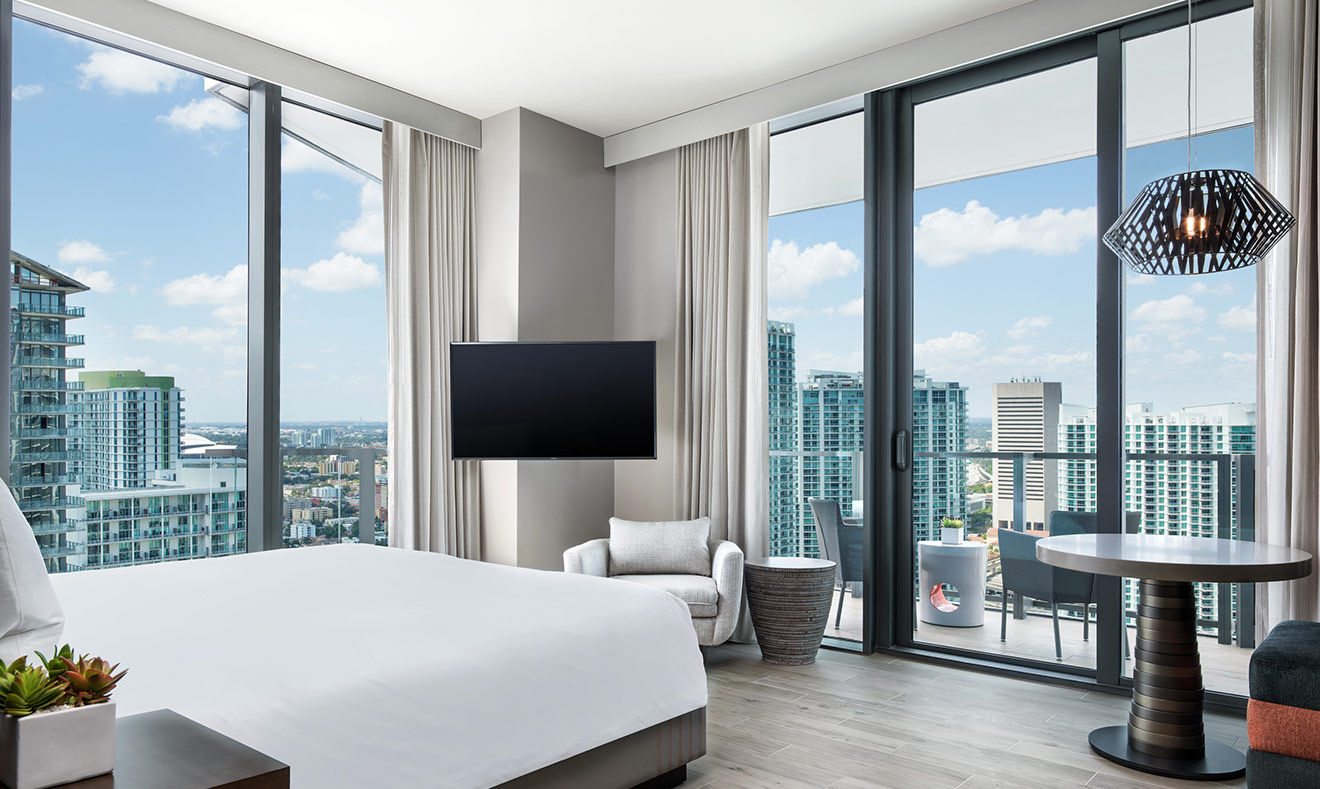 Perhaps booking a hotel by the beach isn’t your cup of tea – you prefer being in the thick of things, the centre of the hustle. Then the EAST Miami is the best pick for you, located in the heart of Miami’s financial district. It’s perched on the top floors of the Brickell City Centre building, boasting 352 rooms and a giant pool deck comprising two pools. The entire look and feel of the place is sleek, modern, and a contemporary blend of east-meets-west. The in-house Uruguayan restaurant Quinto La Huella is a must-visit, a sister outlet of Uruguay’s well-known Parador La Huella restaurant. 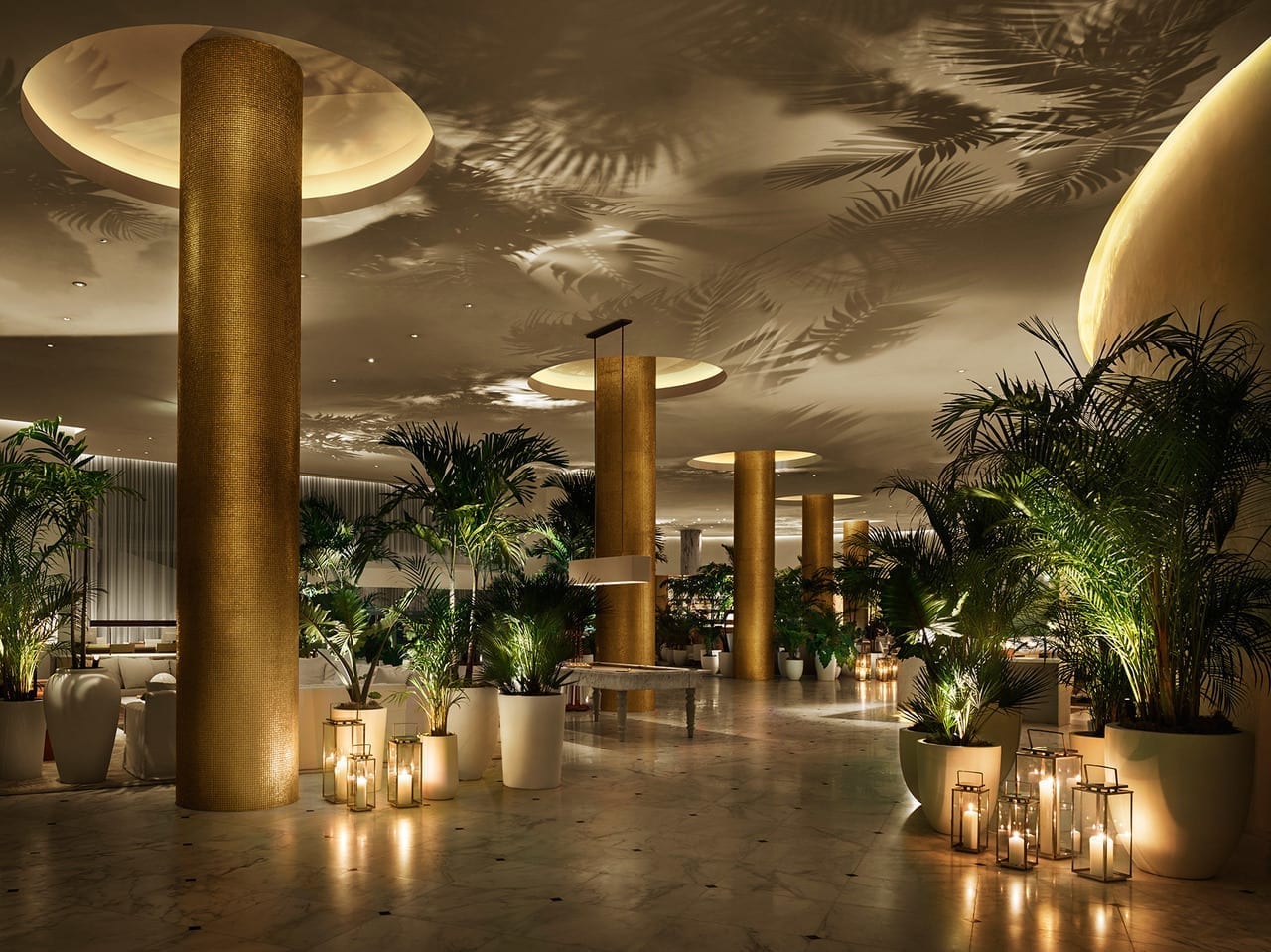 As with any EDITION hotels around the world, the Miami Beach EDITION is just as stylish. Even the location of the hotel is trendy, located at mid-beach just north of South Beach, where all the upscale restaurants and bars are. At the Miami Beach EDITION, you’re not just here to sleep after a night of partying. There’s an ice skating rink, a bowling alley, and a myriad of nightlife options with five drinking and dining establishments on its property. 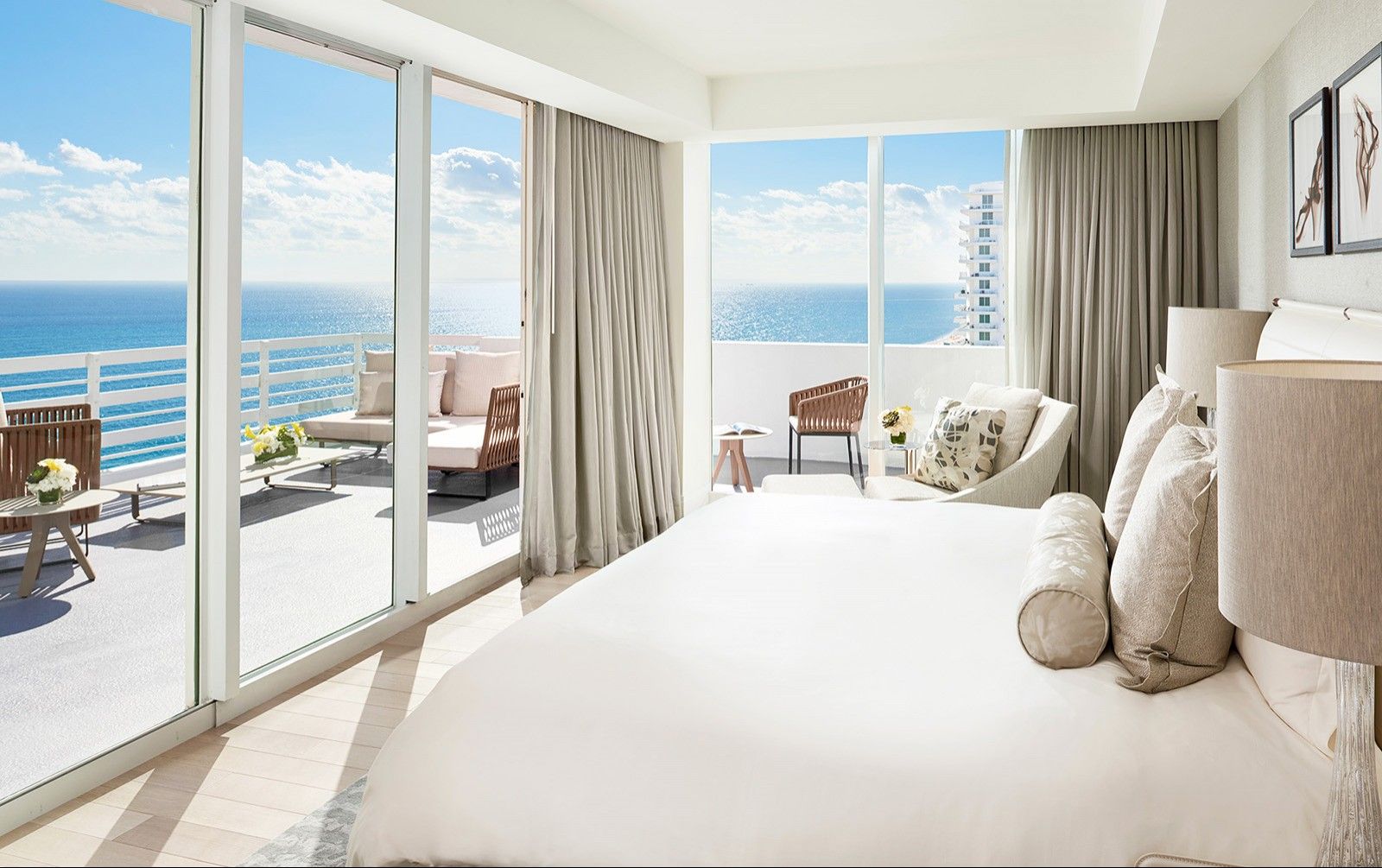 Also another result of Morris Lapidus, the gleaming curved structure of the Fontainebleau hotel was apparently what sparked the entire “Miami Modern” style – you can’t miss it on the Miami Beach. Looking at it, you probably wouldn’t have guessed that it debuted in the 1950s. However, the hotel underwent a $1 billion refurbishment in 2008, hence it’s still one of the hottest properties in the city now. There are 1,500 rooms, four restaurants, and one of Miami’s swankiest clubs: LIV. If you keep your eyes peeled, you might even spot some celebrities lounging by the pool. 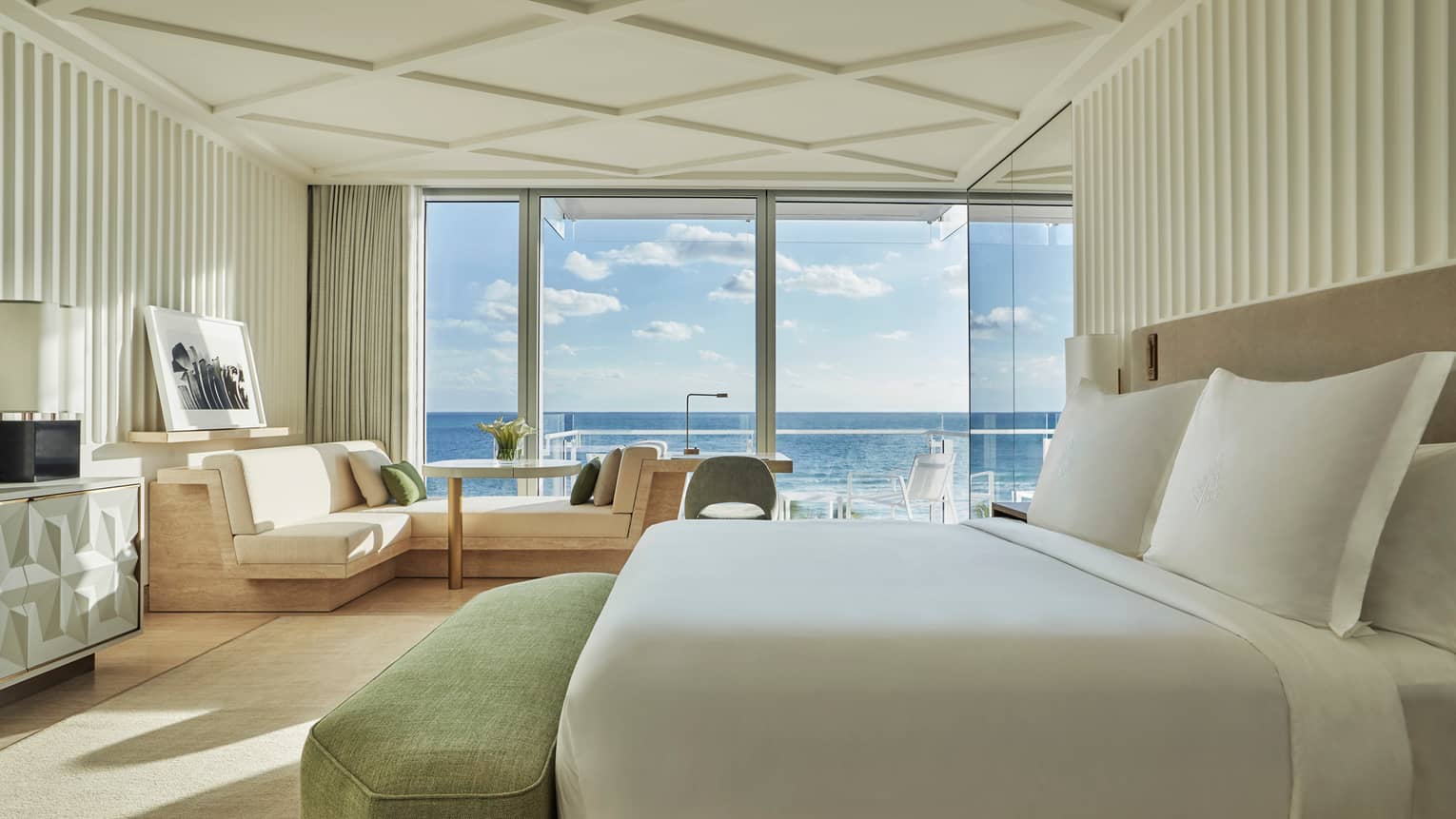 Need a touch of old Hollywood glamour in your life? The Four Seasons Hotel at The Surf Club is offering just that, and an elegantly understated one as well. Boasting a star-studded clientele with the likes of Elizabeth Taylor, Frank Sinatra, and Winston Churchill back in the 1930s when it was just known as The Surf Club, this hotel still remains one of the ultimate places to be seen in Miami. Now taken over by The Four Seasons, the grounds have been extended to include a gleaming 12-storey glass tower. The restaurants are also world-class: there’s The Surf Club by Thomas Keller and Le Sirenuse Miami from the owners of the namesake hotel in Positano.

Getting to the Mandarin Oriental, Miami feels like entering your own private island thanks to its location on a man-made island accessible by a short bridge from the mainland. Even the shape of the hotel has been designed to look like the brand’s logo — it’s that fancy. The hotel also boasts a gorgeous view of Biscayne Bay and comes with a 15,000 sqft spa designed to pamper you from top to toe. Be sure to book yourself a spot in the in-house restaurant La Mar by Gaston Acurio – serving one of the best Peruvian fares in the city. 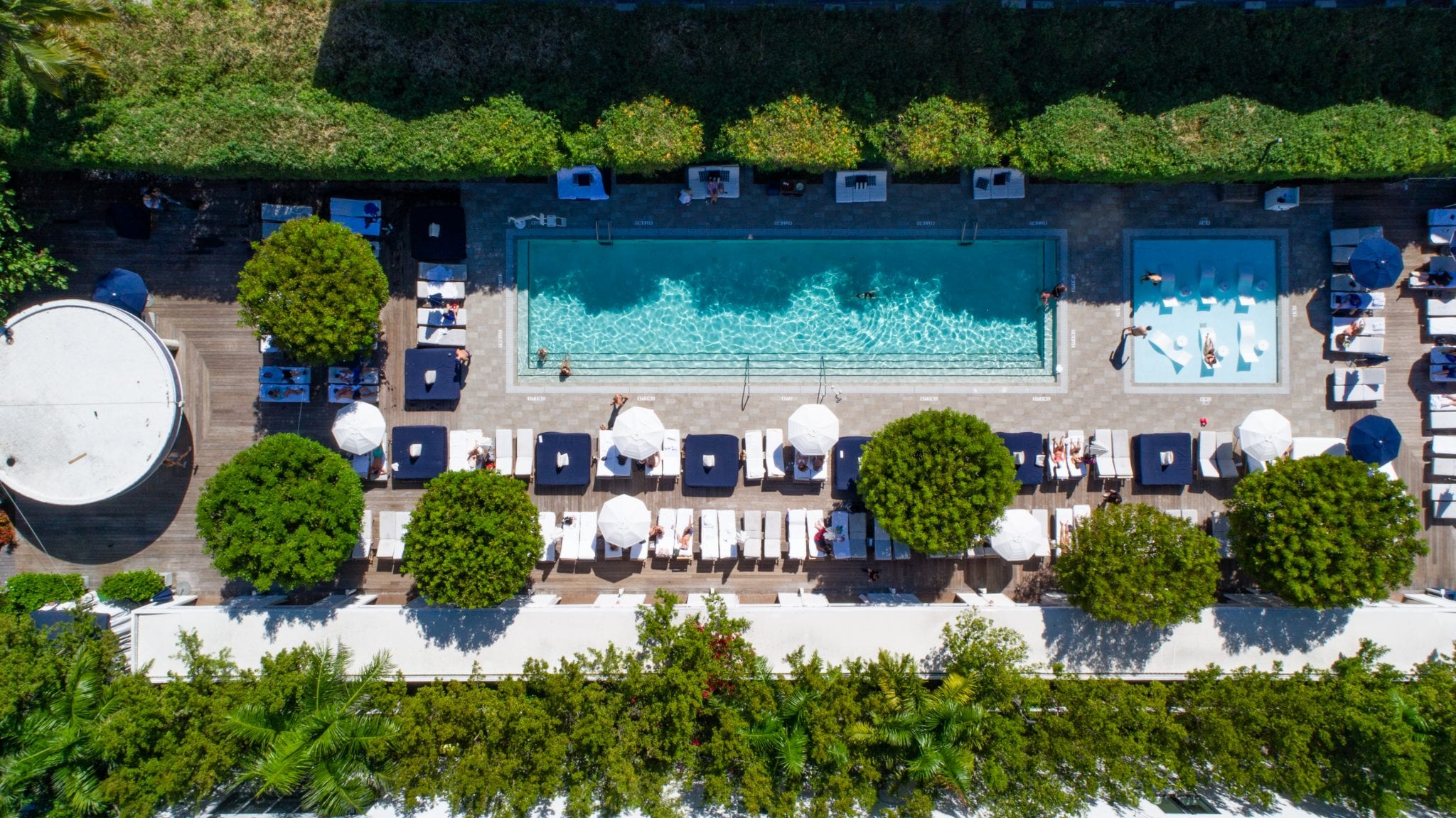 This massive beachfront resort was originally designed in the 1950s by celebrated architect Morris Lapidus, but despite the revamp, plenty of original features and structures have been retained. Beyond that, the refurbishment also includes some contemporary facets, making the Nautilus by Arlo a truly captivating luxury resort. The pool is one of the star features of the place: it’s a heated saltwater pool overlooking the beach and is a large one at 2,000 sqft. 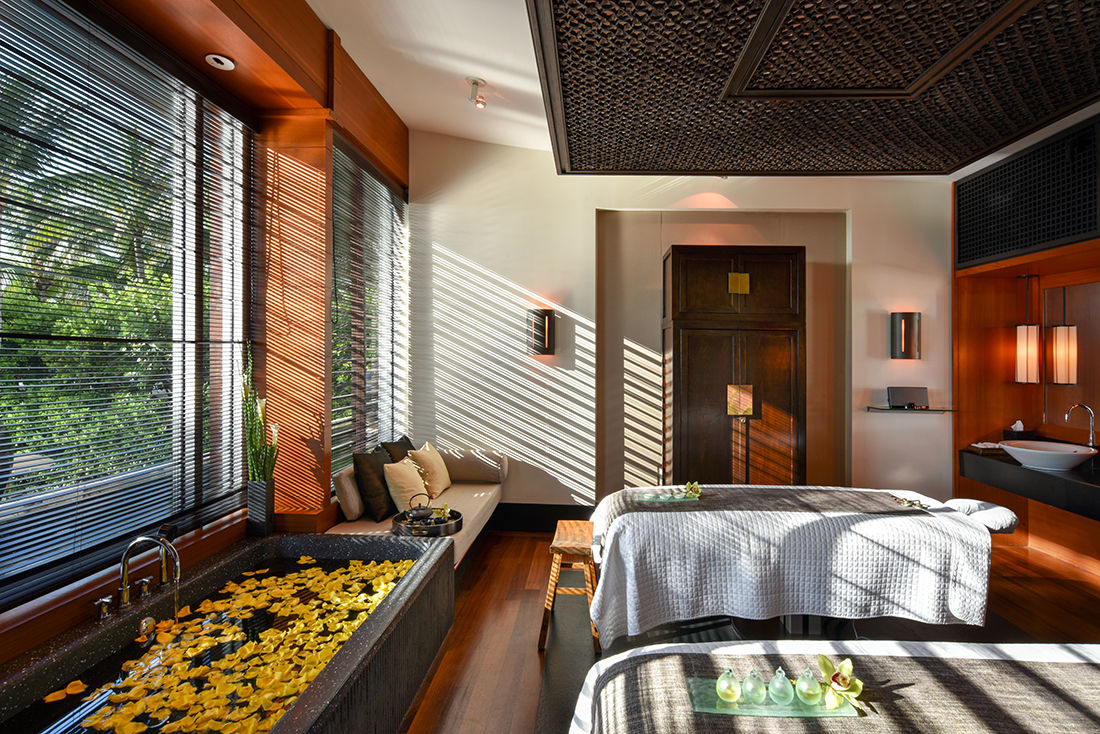 This resort is the epitome of a private sanctuary of tranquillity – it’s no wonder big stars such as Madonna and Beyonce love coming here. As its name suggests, the resort has plenty of Asian influences, evident by the dark teak wood fittings, palm trees, and pagoda-style structures. The hotel comprises two buildings – one is a historic Art Deco building where the hotel rooms are, while the other is a 40-storey tower with is mostly residential. The latter is where the famed Ocean Suites are, boasting sweeping ocean views and handmade Swedish DUXIANA beds that are absolutely heavenly.

As any St. Regis hotel would be, the Bal Harbour Resort in Miami sumptuous. This sprawling, 227-room luxury resort is gilded in Art Deco opulence, designed by the legendary Yabu Pushelberg. Sip on your complimentary glass of champagne upon check in and be prepared to take on the four restaurants, two large oceanfront pools, Remede spa, and more. The fact that it’s adjacent to the Bal Harbour shopping street makes this stay all the sweeter.

see more
Travel Wanderlust Florida Miami Miami Beach
Lifestyle Asia
Here's where you can read the latest news and stories from Lifestyle Asia and our sister titles PrestigeOnline and Augustman, curated from all of our editions in Hong Kong, Singapore, Kuala Lumpur, Bangkok and India.
Luxury
Sign up for our newsletters to have the latest stories delivered straight to your inbox every week.