The most Instagrammable luxury hotels in Santorini for your summer getaway

Rendered in an endless rhapsody of blue and white, it’s easy to see why Santorini so effortlessly draws throngs of tourists from around the world. The island is one of the Cyclades islands in the Aegean Sea, and adopted its famously rugged landscape after a devastating volcanic eruption in the 16th century BC.

Today, it’s home to two main towns — Fira and Oia — both of which are flanked by hundreds of whitewashed cubiformed hotels and private estates on the multi-coloured cliffs, many of which boast picture-perfect sunsets and sleek Cycladic lines.

If you’re planning a trip to the bucket-list destination in Greece this summer, here are some of the best luxury hotels in Santorini to hit up. Located on the edge of Oia is Perivolas, which was once home to wineries and stables of Santorini’s resident farmers and fishermen. Today, the 300-year-old cluster of cave dwellings — each carved out of the landscape — is now a complex of luxury villas, each brimming with charm and intimacy.

While the curvy infinity pool remains to be the main draw, the rooms are just as photogenic. The decor, an exercise of pure Cycladic minimalism, sees low-slung beds tucked into alcoves with arched windows, and come packed with luxuries such as personal plunge pools and a private terrace to soak in the views. The hotel also has a fleet of speedboats for trips to secrets beaches or nearby islands, so you wouldn’t mind that there are no televisions provided in all the rooms anyway.

Iconic Santorini might define itself as a ‘boutique cave hotel’, but it’s far from the grim dingy cavern you’re probably imagining. As one of Santorini’s most beloved luxury accomodations, the hotel is located on the island’s relatively quieter village of Imerovigli, with a reputation of being one of the island’s most romantic spots.

Views from the rooms here are striking from every angle — expect to take in breathtaking sights that include the caldera, the Nea Kameni and Palea Kameni islands, and the quaint villages below. Inside, each of the 19 cave suites boasts rounded whitewashed walls driftwood decor, and embroidered finishings — think gypsy aesthetics, but luxe. The Cliff suite remains to be a favourite amongst honeymooners, providing not only a private outdoor cave plunge pool, but also some of the property’s best views. 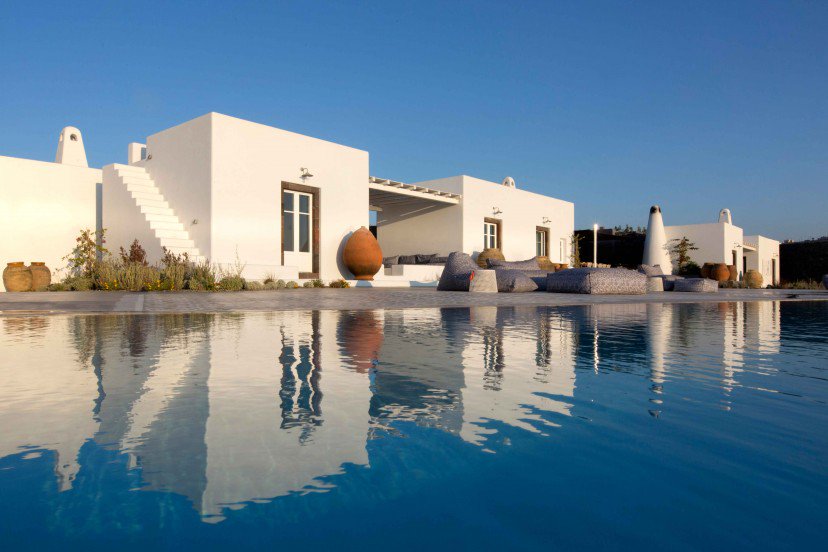 Dramatically perched 1,000 feet above the sea on the volcanic caldera is Erosantorini, which is essentially your ticket to total privacy in the bustling touristy island. Unlike the usual undulating white Cycladic houses, this private estate sees a more modern cubist architecture that easily stands out.

Service is known to be immaculate here; the villa is run by staff who are well-versed in the art of hospitality, and can provide anything from an Ayurvedic massage in the spa, or whip up an alfresco feast using fresh produce from the organic garden. After all, its chef, Dimitris Panagiotopoulos hails from the two-Michelin starred Casa Vissani. Four standalone bungalows can accommodate up to 14 guests, and there are activities such as private wine tastings and catamaran cruises — should you bear to venture out. Kirini Santorini might be located just a short walk away from the main square’s boutiques and bars, and a mere 30 minutes away from the international airport, but the five-star retreat still boasts some prime views of the volcanic Caldera and Aegean Sea.

There a few that top the recently refurbished establishment; its interiors — recently refurbished, no less — are exceptionally sophisticated with luxurious detailing. While most life revolve around its stunning infinity pool, the Anthós Restaurant and A. Spa (amongst the best on the island) are just as popular a spot for guests looking to live their dream vacation. Known for its organic philosophy to wellness, the establishment creates a haven for the weary with a generous slew of amenities. There are three swimming pools, one of which is a cave pool with an artificial waterfall, and the other, the longest infinity pool on the island. The spa hotel also comes with an extensive menu of massages and facials, after which you’ll retreat to your room, each of which are oriented for sunset views. Its restaurant, Throubi, continues the wellness theme with a dietician-vetted menu, although you’ll be inclined to hit up the 200-strong wine list, or its local specialty, a prickly pear digestif.

Travel Resorts Luxury Hotels Greece Santorini
Shatricia Nair
Managing Editor
Shatricia Nair is a motoring, watches, and wellness writer who is perpetually knee-deep in the world of V8s, tourbillons, and the latest fitness trends. She is fuelled by peanut butter and three cups of coffee a day.
Motoring Wellness Watches Beauty Style