The best luxury hotels in the French capital

Haussmannian buildings, shimmering historical monuments and the glimmering Seine with its elegant bridges — without doubt, these make Paris the most glamorous city in the world. Wondering where to stay when you visit? The French capital is home to countless palace-hotels along with some more traditional five-stars that offer numerous je ne sais quoi accommodations across the city.  Whether it’s through Michelin-starred dining experiences by Alain Ducasse or designer spa treatments by Institut Dior, the best luxury hotels in Paris offer outstanding experiences that you’ll cherish for years to come. Here are our picks for the eight best luxury hotels for you to book, whether you’re visiting Paris for the first time or the tenth. 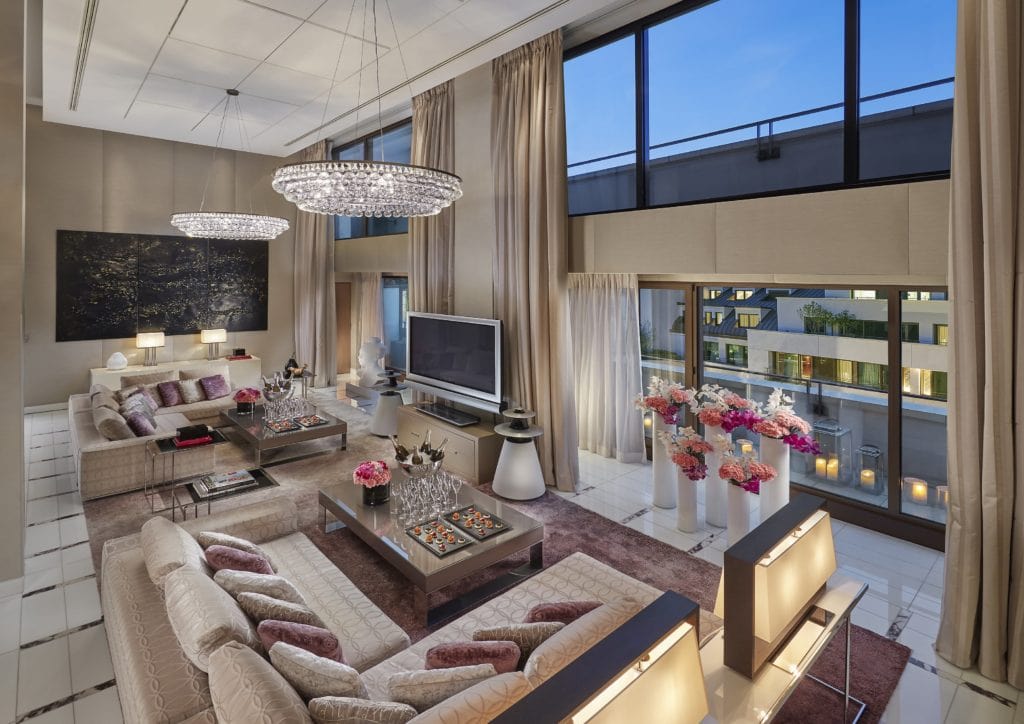 The Mandarin Oriental Paris itself is a haven of elegance and understated luxury, flanked by designer fashion boutiques on Paris’ most upmarket shopping street. This luxurious five-star hotel is a nod to French haute couture, neighbouring some of the world’s finest jewellers lace — Place Vendôme — and Jardin des Tuileries, that is just a five-minute walk away. The hotel exudes a timeless elegance with gorgeous, contemporary interiors with decorative butterflies generously displayed throughout the hotel, including 138(!) in glittering Swarovski crystal above the concierge’s desk and dozens more in ceramic or sumptuous velvet, to continue the nature theme. The cuisine, a three-Michelin-starred love affair, is cutting-edge with deliciously light dishes and tantalizing cocktails, leaving the Mandarin Oriental’s bar and restaurants to be considered one among the best in Paris. An oasis of Oriental wellbeing, the tranquil spa offers expert treatments, world-class therapists and restorative facilities. Paris is a city that is in need of more unutterably grand and stirringly romantic atmospheric five-star hotels as much as it needs more haughtily elegant ladies with dogs that fit into their handbags. When La Réserve made an entrance, on a quiet, tree-lined street seconds away from the Place de la Concorde, past the Haussmann-style façade and a fiery red door, it proved beyond a doubt that there was room for at least one more — this one. The venue is the most beloved address in the French capital for fashion editors, and the go-to for regular visitors who want to feel like they’re staying in a private mansion. It was designed by Baron Haussmann for Napoleon III’s half-brother the Duc de Morny in 1854 and has only 40 rooms. The larger suites face the Grand Palais and the Eiffel Tower and the smaller ones the courtyard. The interior is an explosion of colour and texture in the best way imaginable with velvet drapes and silk wallpapers in the richest shades of emerald and ruby — leaving you to truly feel like you have entered a world where refined 19th-century elegance is married with thoroughly modern details. The spot Le Bristol occupies on the Rue du Faubourg Saint-Honoré is right at the grand, historical heart of Paris, just next door to Mr Macron’s Élysée Palace. Le Bristol has served as a hub for a distinguished international crowd since 1925, a favorite of everyone from Charlie Chaplin and Rita Hayworth to top fashion designers and photographers.
The property is decorated in a French regalia and stands tall at its prime spot on chic Faubourg Saint-Honoré. The grand foyer features polished marble floors, crystal chandeliers, flower arrangements and embellishments in true Versailles-style furniture. Café Antonia even features a portrait of Marie Antoinette in drawing. Chef Eric Frechon’s impeccable Epicure, four Michelin stars restaurant, is serving boldfaced favorites while the more smart-casual 114 Faubourg serves one-star-awarded menus around an open kitchen. Both excellent gastronomical choices! The feel is traditional grandeur, from a physical key for each room, to the original forties elevator and the resident’s cat Fa-Raon, often found sleeping under a Louis XV chair in the lobby. Look up the word luxe in the dictionary and you will find a picture of The Peninsula. The property — which takes up a whole city block — is perfectly situated in the heart of Paris at 19 Avenue Kléber, just steps from the Arc de Triomphe and within walking distance of some of the world’s most famous monuments, museums and luxury shopping districts.
After sitting empty for decades, this Hong Kong vision of Parisian luxury, was lavishly redone with vast corridors, a reception dripping with glass leaves, panelled bar and meticulously restored rococo salon. Some of France’s finest artisans were hand-picked to undertake the stunning restoration which resulted in airy, refined public spaces, where a muted cream palette is accented by restored original wood, decorative stone work, and 40,000 pieces of gold leaf. And with five in-house dining venues, you hardly have to seek to leave the hotel. The eateries include LiLi, serving Cantonese cuisine (including a range of dim sum), the sixth-floor L’Oiseau Blanc — an indoor/outdoor French restaurant themed around the early days of aviation — and Le Bar Kleber, where original 1908 oak paneling, oversized mirrors, and terrace views set the mood for early evening cocktails. 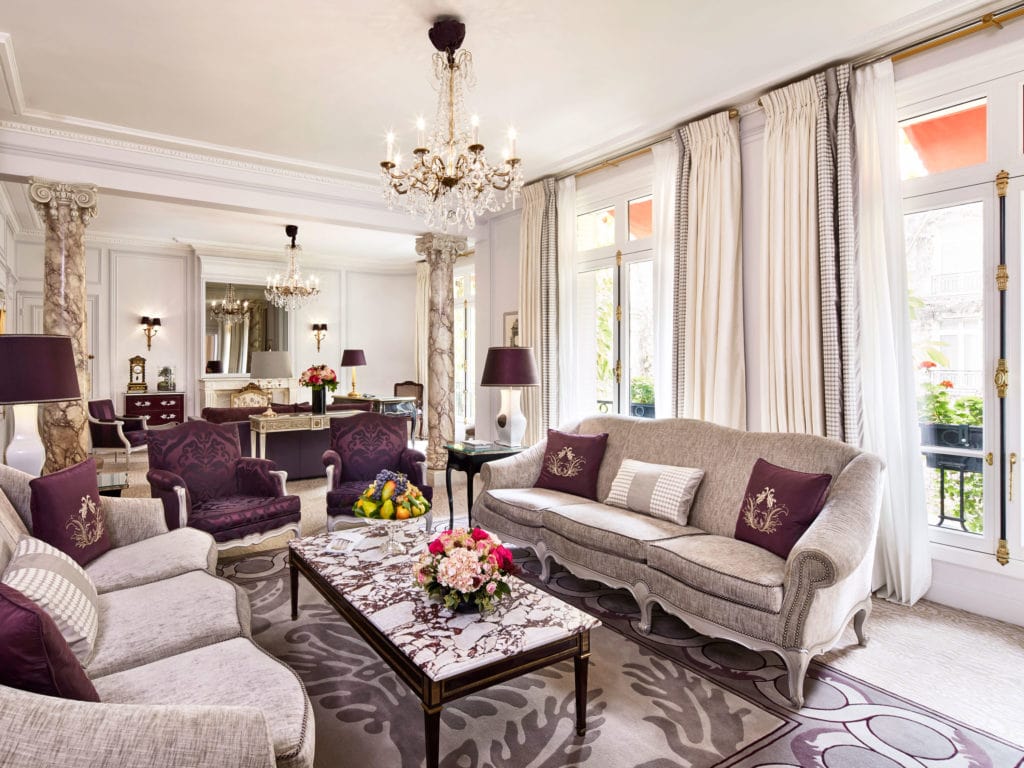 A chic hotel, perfectly situated on one of the most prestigious haute couture addresses, Avenue Montaigne, making it the ideal stay for groupies of luxury. The high-end theatres and cabarets of the ‘Golden Triangle’ district, such as the Théâtre des Champs-Élysées and Crazy Horse, are within close walking distance. The venue opened in 1913, and with its signature red awnings facing the stately avenue, the Plaza Athénée is known to have ties to the fashion world — from the days when Christian Dior named collections after the hotel — to its appearance in fashion-themed favorites like Sex and the City and The Devil Wears Prada. The dazzling restaurant, Alain Ducasse au Plaza Athénée, are serving dishes — often displaying unusual and interesting bitter notes — that are both unexpected and delicious. At the Dior spa, the fashion theme is seen in the blue fabric which swathes the ceiling of Le Bar Onirique. At night, an atmospheric hue is cast over the space and it is not an unusual sight to find a harpist providing the mood music in the long vaulted halls that link the restaurants and bar. The hotel is famous for its bedazzling view where some suites on the top have superb views of the Eiffel Tower, including room 888, with a floor to ceiling picture window and viewing telescope. 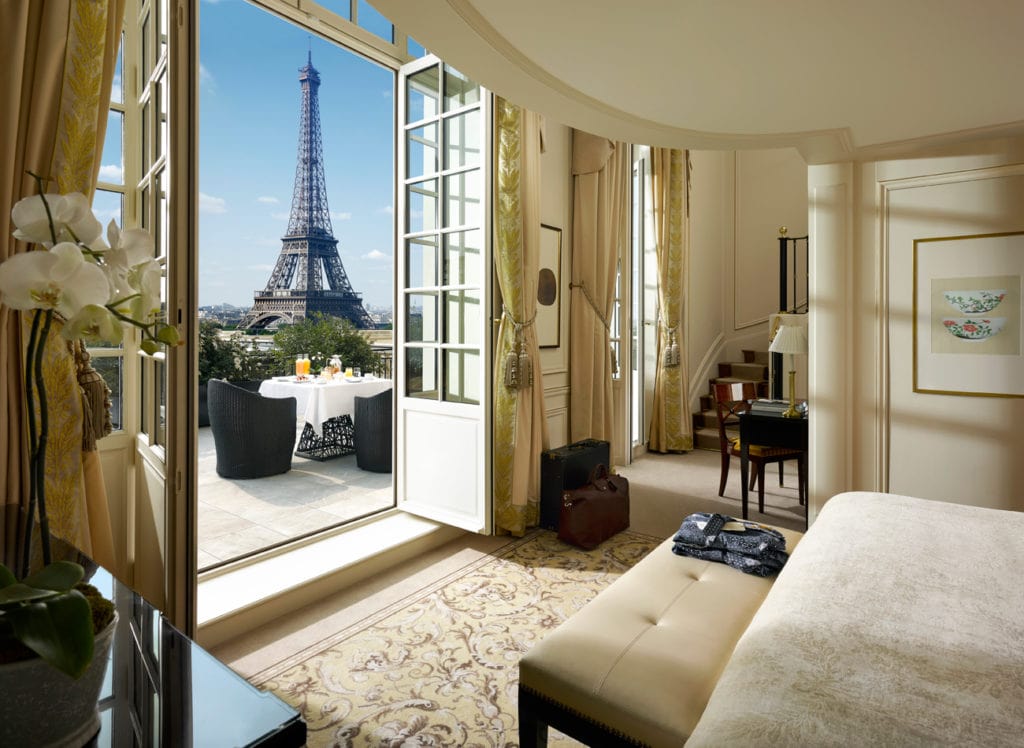 Expect the be greeted in the most finest French manière, from top-hatted doormen to qipao-clad reception staff, the Shangri-La Hotel Paris is a magnificent icon of style and elegance. The venue was originally the private mansion of Roland Bonaparte, eccentric botanist and great-nephew of Napoleon and the now landmark features a dome-topped marble entryway, original wood floors, stained glass windows, and hand-carved mahogany panels — plus that famous staircase. But the venue is not only pretty to look at, it’s a favorite destination dining spot for locals. The hotel houses the two-Michelin-starred L’Abeille for creative fine dining in a garden-inspired setting, and Shang Palace, the only Chinese restaurant in France with a Michelin star, where chef Samuel Lee Sum serves probably the best, most authentic Cantonese cuisine in town. The hotel combines a sense of history and grandeur with sophisticated comfort and service to provide a uniquely Parisian experience with breathtaking views of the Eiffel Tower and the River Seine Fashionista George V is Paris’ most historic little-black-book address, lying on a wide avenue off the celebrity Champs-Elysées in the upmarket 8e arrondissement, surrounded with the crème de la crème of fashion houses. It’s hard not to lavish in its opulent interiors that are bourgeois to the hilt, with spectacular art works, crystal chandeliers, 17th-century Flanders tapestries and wildly extravagant flower displays by artistic director extraordinaire Jeff Leatham (the highly stylized, floral theme changes every season, with a team of nine florists expertly arranging 15,000(!) freshly cut Dutch blooms a month). When this original Art Deco palace reopened as a Four Seasons hotel in 1999, the 244 rooms were reworked in a quintessentially French, classical Louis XV style. Even entry-level deluxe rooms are huge by Parisian standards and encourage guests to linger – a desk with exquisite vintage-styled stationery, comfy armchairs and coffee table are standard. The palace holds three Michelin-starred restaurants, each one of them offering diners to theatrical gastronomic dining. Of all the luxury hotels in Paris, Park Hyatt Paris-Vendôme, with its modest entrance, might be the most underestimated one. But don’t be fooled by that, designed by Ed Tuttle, famous for his work with Aman resorts, this palace that occupies five 19th-century buildings between the Place Vendôme and the Opéra Garnier, has an interior so crisp and minimalistic — with an orderly mix of limestone, mahogany and marble in all shades of beige — leaving it impossible not to like. The 153 rooms, adorned in silk, wood and bronze, have a sensual ambiance that’s romantic in a contemporary way (as opposed to the Rococo fantasies of some of its rivals). There’s a spa and well-equipped workout facility, plus four restaurants, including Pur, a Michelin’ starred fine dining restaurant with an open kitchen. Though the prime shopping of the Rue de la Paix is right outside the front door, guests also have access to 10 Vendôme, a luxury consulting company whose personal shoppers will bring you clothes to try on in-suite. In short, the Park Hyatt is less traditional than the other top choices in Paris, but no less luxurious.

The hottest new hotel openings around the world that you need to bookmark, STAT