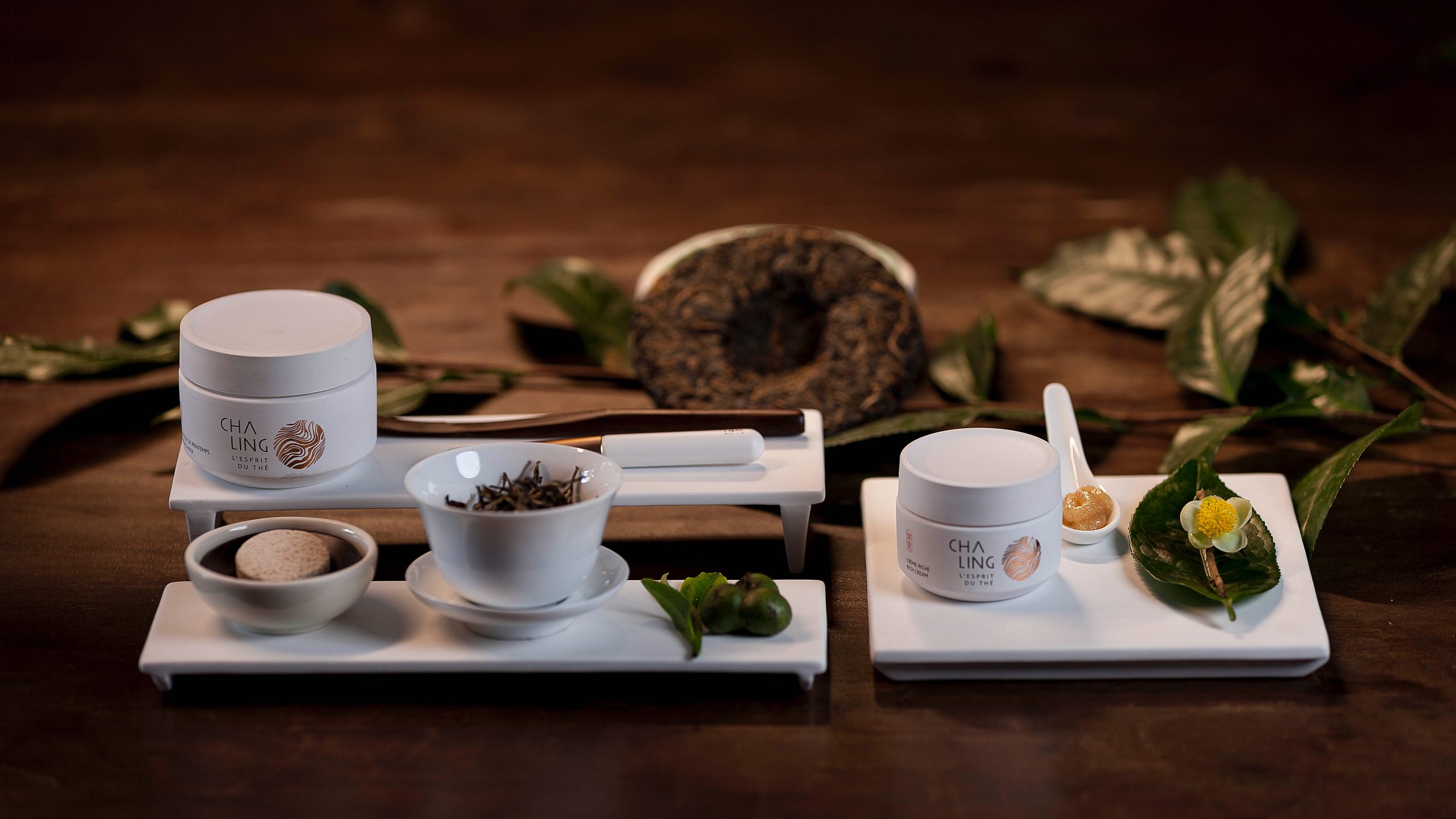 Pu’erh tea may be best known as an excellent accompaniment to dim sum in this part of the world, particularly helping to cut through greasy foods and aid digestion. When drunk and even applied to the skin, pu’erh has also been touted for its antioxidising benefits: a selling point that’s only spread internationally in recent decades, and perhaps in a misleading manner.

“What is important to realise is that not all tea is equal,” François Gérard tells Lifestyle Asia. An ethnobotanist expert and a senior consultant for LVMH Group, Gérard has been responsible for researching the botanical ingredients that go into some of the group’s most lauded skincare products, such as Cha Ling’s entire tea-infused range and Guerlain’s Orchidée Impériale.

With more than 30 years of experience in plant resources and biodiversity conservation, François Gérard has been working with Dr Josef Margraf and Minguo-Li Margraf, a couple who founded the TianZi Biodiversity Research Centre in Yunnan. Having spent much time in the centuries-old tea forests, Gérard is steeped in knowhow about the sustainable cultivation of the pu’erh tea that goes into every bottle of serum or jar of moisturiser by Cha Ling.

We recently sat down with Gérard to learn more about the skin-saving properties of pu’erh, and to discover the value of “real” tea grown from ancient forests compared to everyday commercial varieties.

What was it that first got you interested in studying plants and biosciences?

I’ve wanted to work in nature for a long time. I grew up in Paris, but I was very unhappy [in the city]. However, we had the chance to have a country house near the south of Orléans, and we would go every weekend — I would spend hours and hours just contemplating nature, trees, running in the forest. I could go horse riding, I could pick mushrooms. What really attracted me was this amazing diversity of nature.

I did my studies at the National Agronomic Institute of Paris Grignon, which is actually one of the leading life sciences schools in France. After my studies, I traveled a lot; but I settled on a [goal] to identify plants for a new application, for the hospitality industry, for the food industry. My job was to find the [right] plant for certain applications.

In Europe, we have quite a good tradition and very interesting range of species, but in this part of the world, and in India, there has always been a written tradition of plant resources and how to use them not only for the skin, but also in medicine. Here, because of the differences in climate [it’s a tropical country], you have a lot of important diversity, but also differences in the traditions of how to use it through traditional Chinese medicine.

Why does Cha Ling -- and many other skincare brands in fact -- specifically focus on tea as an ingredient?

Tea is definitely one of the key plants of traditional Chinese medicine for wellbeing. What is important to realise, however, is that not all tea is equal. Cha Ling isn’t using just “tea.” Basically, the “real” tea has been grown for the past 5,000 years — that tea is from a tree. Nowadays, almost all tea that we drink is grown as a terrace tea through intensive farming, it’s the same clone so there’s no genetic diversity. Green tea, black tea, oolong tea, they are all cooked and all the microorganisms inside are almost all dead.

Those microorganisms, the small bacteria and fungi, are the transforming processes. They are necessary to humans — humans themselves have up to 5,000 species on the skin. Our idea is to nourish and diversify the skin by giving it diversified food from different kinds of molecules that are especially suited to them.

Our pu’erh tea is full of amazing microorganisms and there’s biodiversity inside and outside, on the surface of the tree. They have thousands of species of microorganisms, especially our trees, because it’s a highly diversified forest. When tea is used topically, it is supporting the skin microbiome. We find that in our tea trees at Cha Ling — we provide the right ‘food’ for the skin. 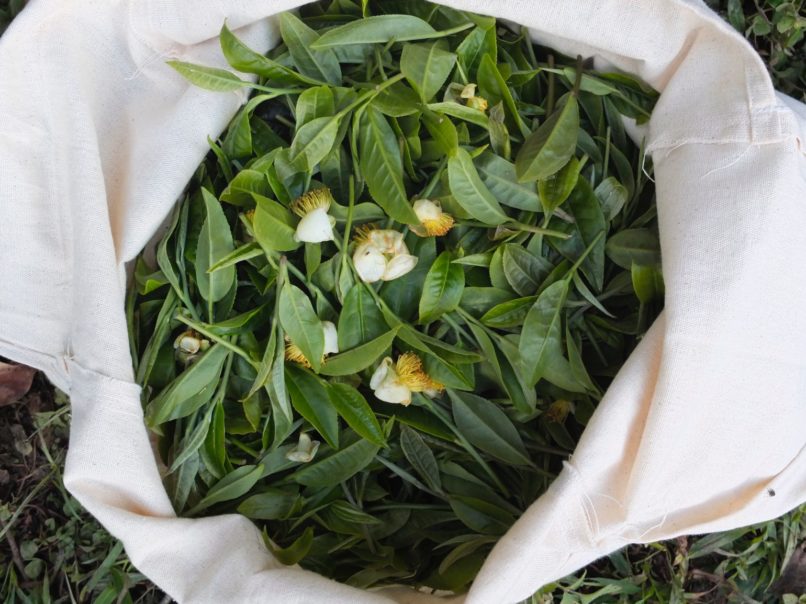 What are the specific benefits of having highly diversified pu’erh tea for the skin?

Tea itself has amazing antioxidant power, and you [end up receiving] many kinds of antioxidation processes from the rich range of molecules you are applying to the skin. It’s highly efficient because of the wealth of molecules, which bind with and neutralise the toxins so it gives great power of detoxification. In pu’erh in particular, compared to green tea, we’re able to neutralise different kinds of oxidants that are coming onto our skin due to pollution, due to stress.

When you nourish your skin microbiota, you reinforce all your defenses. They support your immune system, and decrease inflammation. When you have eczema, it means you have an invasive species that is taking over. If you have a lot of microorganisms, they can fight and stop these invasive species, and it becomes balanced again. The skin microbiota also produces a certain biofilm, made up of exopolysaccharides. This makes a very thin layer that’s efficient against UV rays, acids and pathogens. 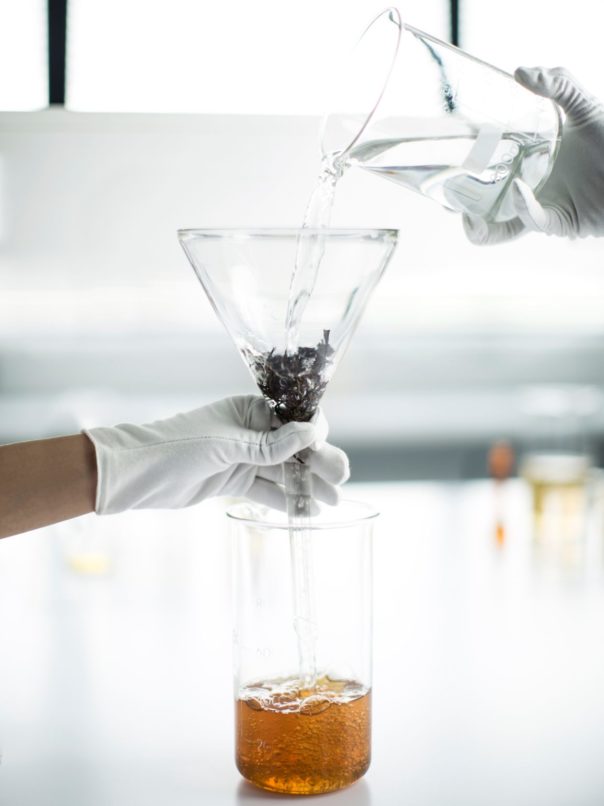 Is there a difference in quality between good tea you drink and the kind we should apply on the skin?

There’s a direct relation with good tea for taste and good tea for the skin. Usually, if you drink good and expensive pu’erh tea, it is because it’s very old — our tea trees range between 300-700 years old. An old tree can launch roots very deeply into the soil, and the deeper it gets it can suck more nourishment from the soil. Just like a good wine, you have a great wine if the roots of your vineyard go all the way to the rock.

Of course when an old tea tree has all this flavour coming from the deep layers of the rock, you can taste the difference. But for the skin, it’s the same where the these old trees offer a diverse range of microorganisms.

Other than the age of the trees, what processes do you use to ensure you attain the highest quality and biodiversity of microorganisms?

We follow the traditional, complex processing of pu’erh tea, where the aim is to enrich the microorganisms in the tea. We have a special area in the tea forest, a highly diversified environment at high altitude — at low altitude the quality of tea is much lower. We check the soil to make sure there are no heavy metals. 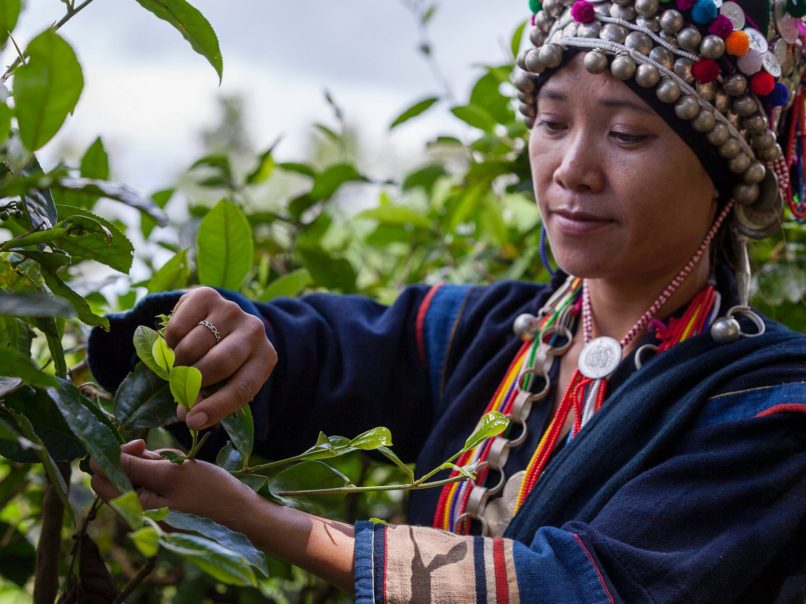 We only pick the leaves in the spring. Why? Because spring tea is the best tea. It’s the end of the dry season in March, you have the first shoots of the trees, and the actives, the microorganisms, are concentrated and sticking to the sap, and ready to burst out with very new shoots. That’s the best. After May and June when you get the rainy season, you have much more tea growing, but it’s bad quality. That’s the quality of tea that’s exported to the western people who don’t know tea! Then you have the fall tea — which comes after the rainy season — that’s slightly better, because you have less rain, but it’s still not as good as spring tea. That’s what makes the difference, it’s got the strongest in actives.

Sometimes you see people who want to make more money out of the ancient tea forest, so they also harvest the tea in the summer, to maximise it. But this creates overpicking. People exploiting the forest will start to kill it — it’s a lot of drama, and a shame. We make sure we don’t exploit summer tea, so it keeps the forest healthy. 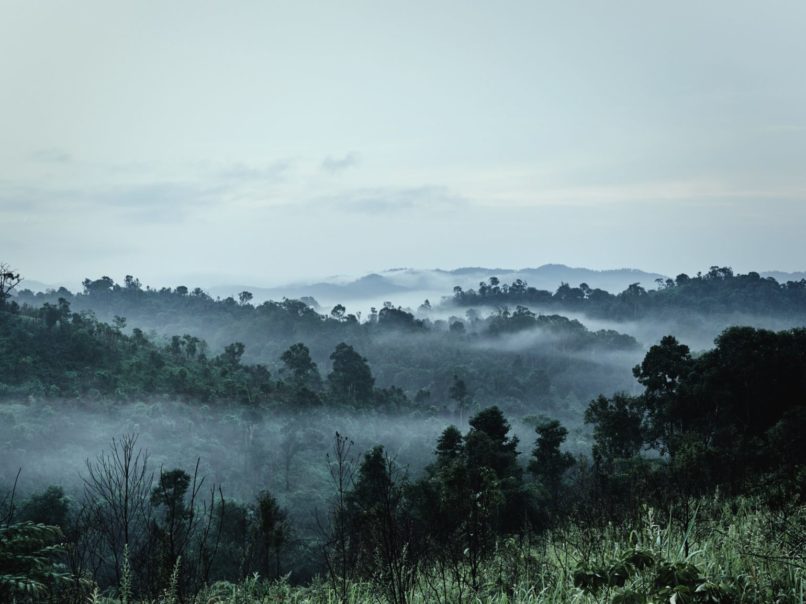 In our product we mix raw pu’erh tea, also called the sheng (raw) cha, which is just a few months old. We then mix it with an aged sheng cha — this aging we do for roughly five years — this is more or less the optimum diversification of the microflora, when it reaches its peak. This way, we double the overall biodiversity of the product.

How does your programme help maintain the integrity of these ancient forests?

Ancient tea forests are a very vulnerable capital on the planet, and what we want in addition to sell and do business, is to restore the forest. We have a program where we maintain the forest as it was grown in the past. Instead of [maximising output by] having a tree every 30 centimetres, we have one every two, three metres, mixed in with other trees. We’ve selected species that match well with the tea: for instance, Ficus altissima, a type of fig tree that grows very high. It is usually in all our ancient tea forests, but because it’s so tall, it attracts big birds, which stop here. They bring seeds from outside — other species coming from far away — and naturally they land in the soil, which enhances the biodiversity of our tea garden. 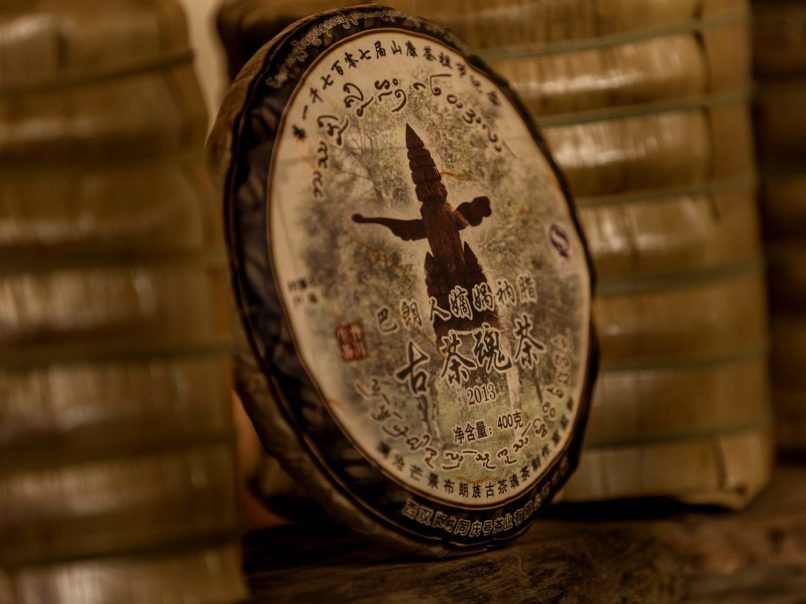 Instead of having 10 or 20, we have maybe 100 tree species, and then you’ll have birds and bats and also giant squirrels eating the particular fruits. They bring not only seeds, but also microorganisms — the special bacteria contained in their gut. We also have beehives in our programme — not only do bees do pollination, but they also transport microorganisms from one flower to another flower on their feet.

Would you consider tea to be a secret weapon for good health?

It is interesting to see that all civilisations have drinks to survive. You see in Europe we have wine, in America it was the cocoa, and Africa you have the coffee, but in Asia, it was the tea.

If you only have one kind of bacteria and none other to protect you, in a few hours you’d just disappear. Nothing is left. This is why we need micro biodiversity — it is absolutely essential to human beings. This tea is very important because there are such complex ecosystems — from the tree to the tea — that bring human beings key essential bacteria and fungi. That is why I think the tea is one of the most popular and important beverages in the world — there’s a reason for that.

Skincare Beauty LVMH Guerlain Botanicals Cha Ling puerh tea plant-based
Evelyn Lok
Managing Editor
When not trying out the latest beauty and wellness trends, Evelyn is likely enjoying a perfectly balanced negroni or exploring some of Hong Kong's best new places to eat and drink. At Lifestyle Asia she covers everything from the biggest events in town to interviews with Hong Kong specialists, with topics spanning art, food and drink, health, tech, and travel.
Beauty Wellness Events Art Drinks
Sign up for our newsletters to have the latest stories delivered straight to your inbox every week.

Where to buy cult skincare brand CeraVe in Hong Kong

Where to get The Ordinary skincare in Hong Kong

Best in Beauty: Our 6 favourite products this month