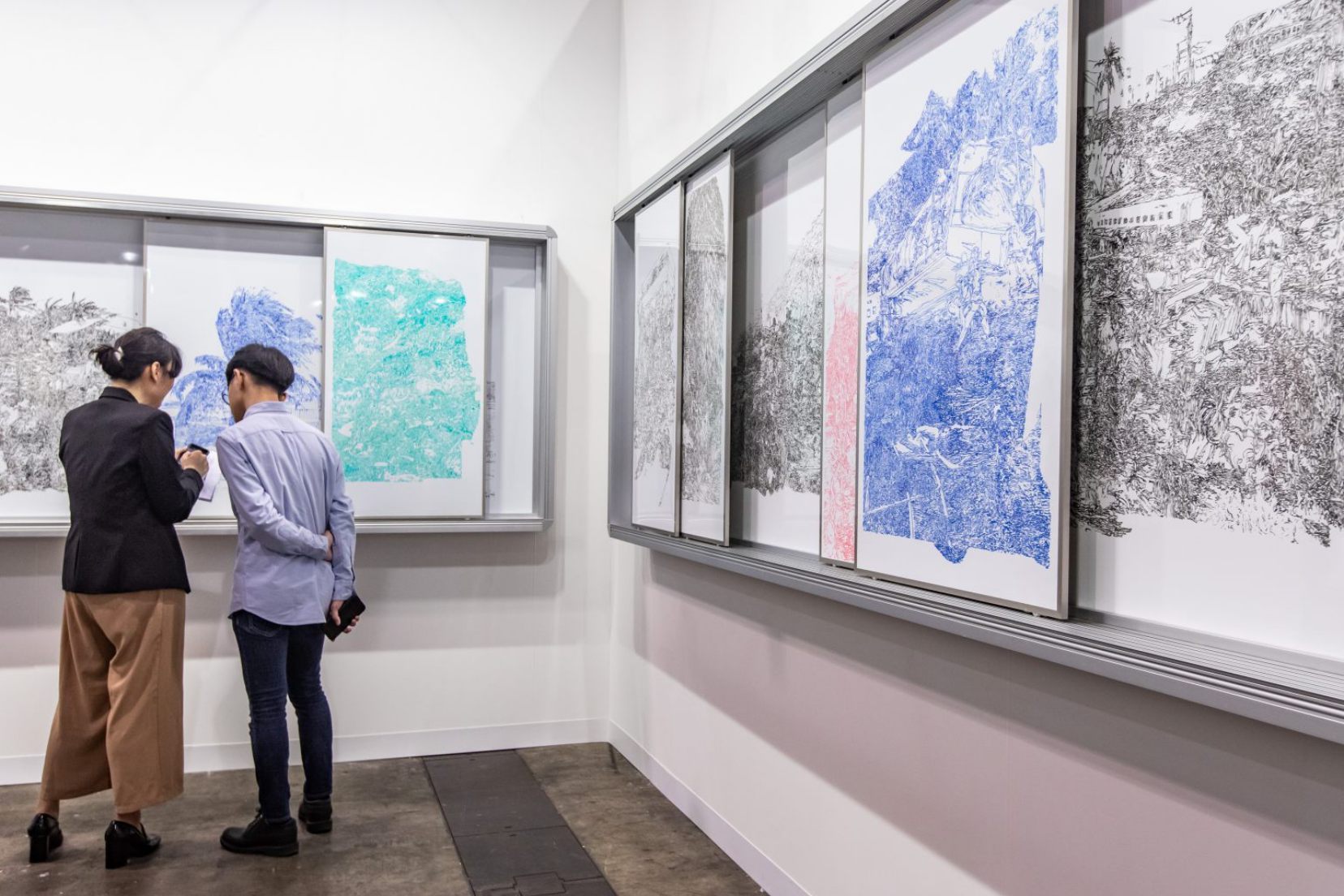 There are hundreds of galleries to browse this year at the 2019 edition of Art Basel Hong Kong (242 in fact from across 35 countries, and 21 taking part in the fair for the first time. It’s always overwhelming when thousands of pieces are clamouring for attention, all with varying levels of visual impact and audacity: ranging far and wide from ghostly ships floating above fair-goers in the Encounters sector to more modern masters than you can count. As you’re navigating the fair, be sure to not miss our favourites below. 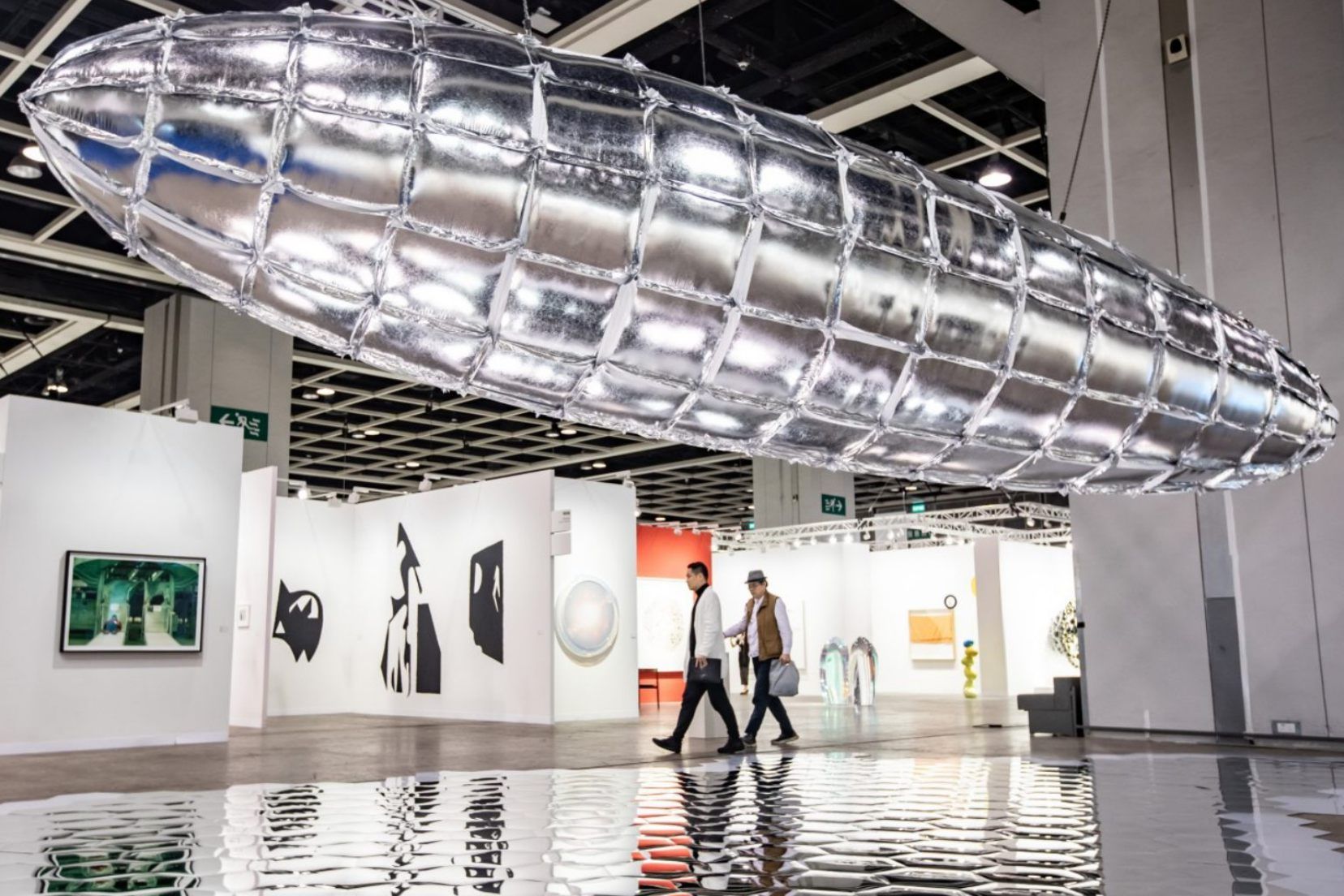 Part of Alexie Glass-Kantor’s curation titled “Still We Rise,” the Encounters sector sees large scale works that present ways to help us contend with the sociopolitical challenges of today. Lee Bul’s 10-metre-long metallic balloon is modeled after the Hindenburg zeppelin, which famously burst into flames in 1937. It’s at once a nostalgic symbol of progress as well as the dangerous potential for technological failure, reflecting the fragility found in any utopian attempt. 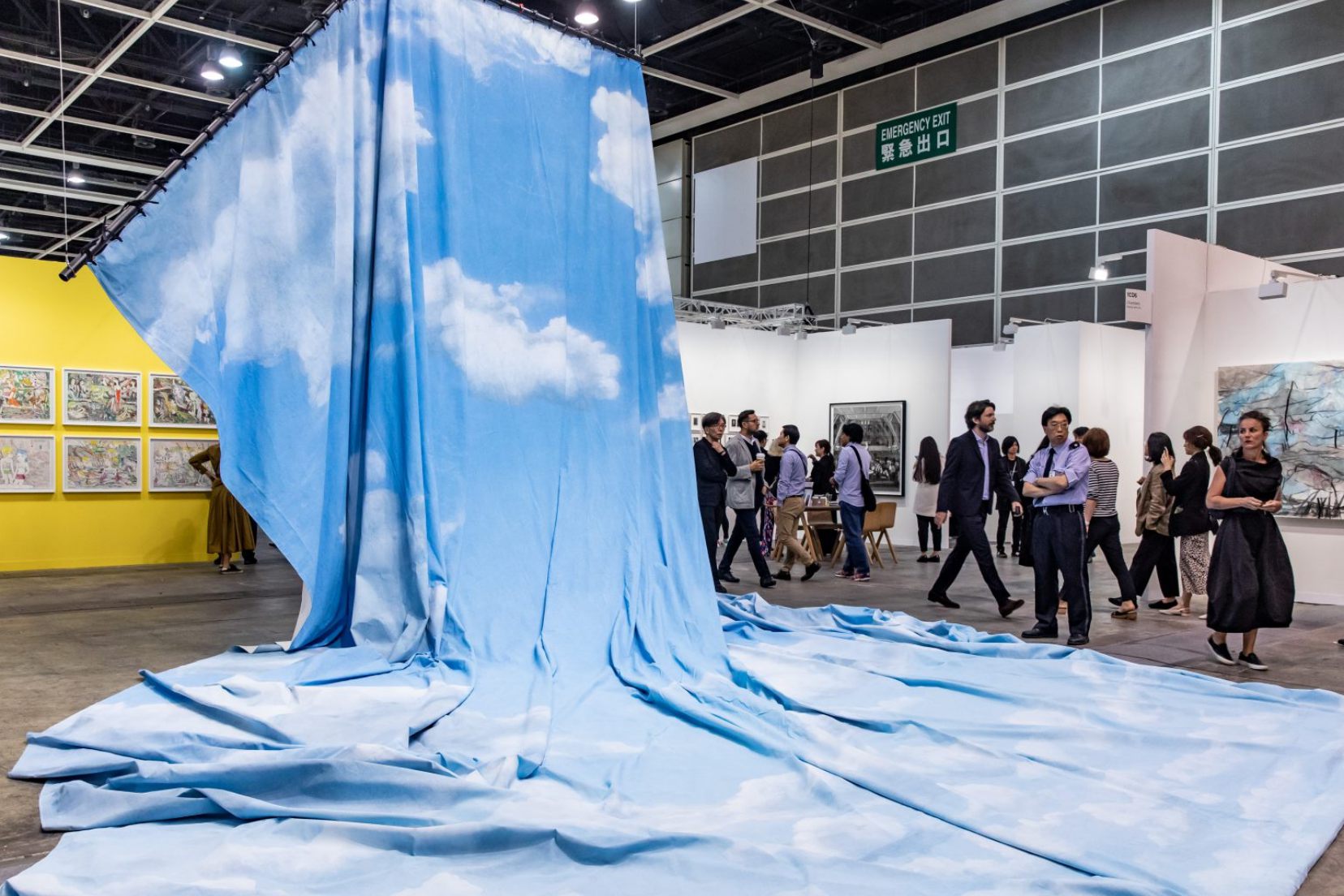 Seeing this work recalls the feeling you get watching “The Truman Show” — what’s out there after the curtain of utopia has fallen? There are no keys to the context, simply a fallen theatre backdrop of a perfect blue sky and white clouds, crumpled and forgotten. Have the actors all run off to find freedom? 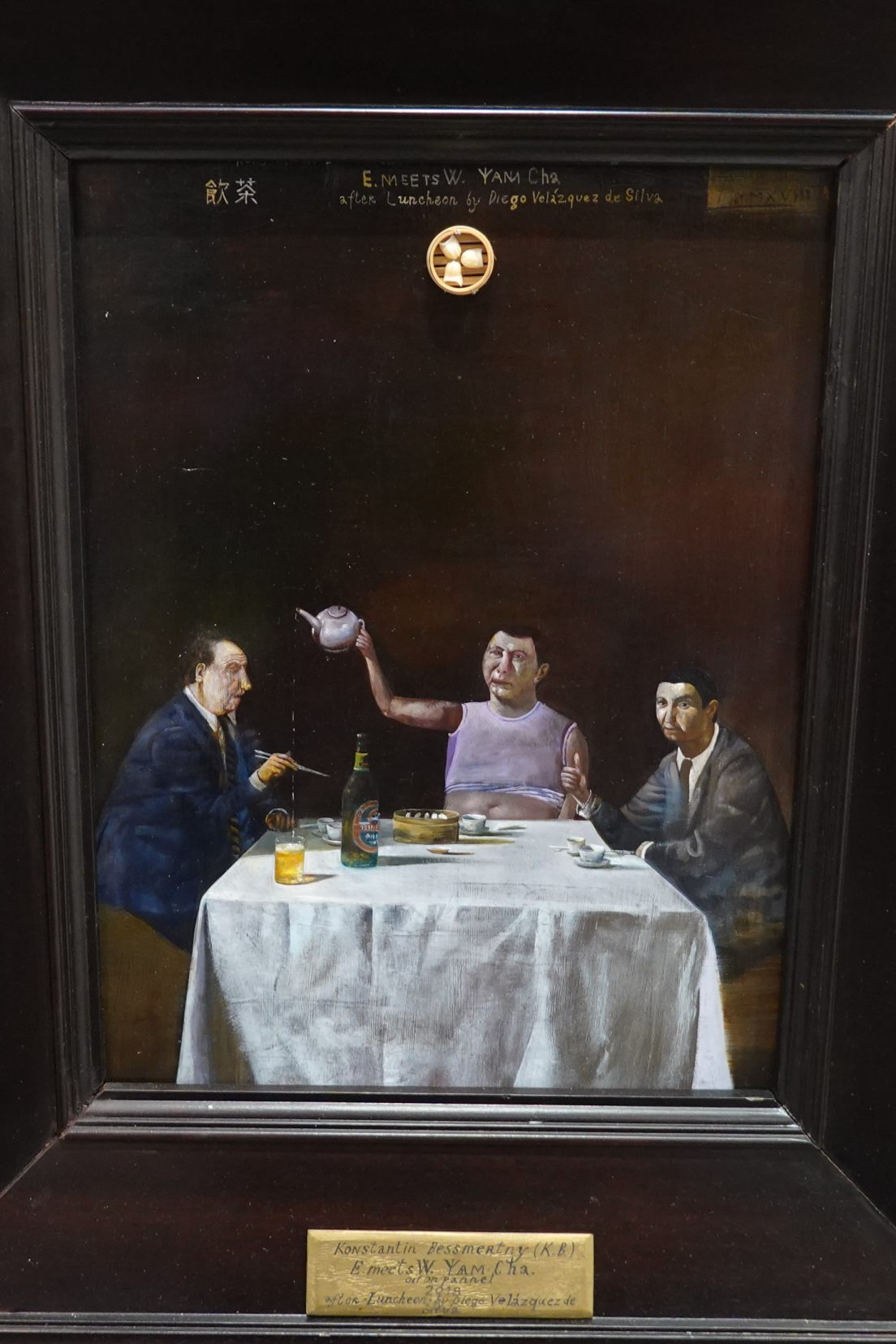 The Hong Kong- and Macau-based Russian painter Konstantin Bessmertny was educated under the grand academies of the former USSR. Straddling between high culture and cheekiness in his oil paintings, his works are always ridden with intelligent references to philosophy, history and vernacular jokes. One of our favourites of his pieces showcased at Gallery Exit’s booth is “Luncheon after Velazquez,” a reference to Diego Velazquez da Silva’s 1617 painting done for the Spanish royal court. Here, Asian politicians polish off dim sum with tea while a Richard Nixon lookalike helps himself to Tsingtao.
Gallery Exit, Booth 1B28 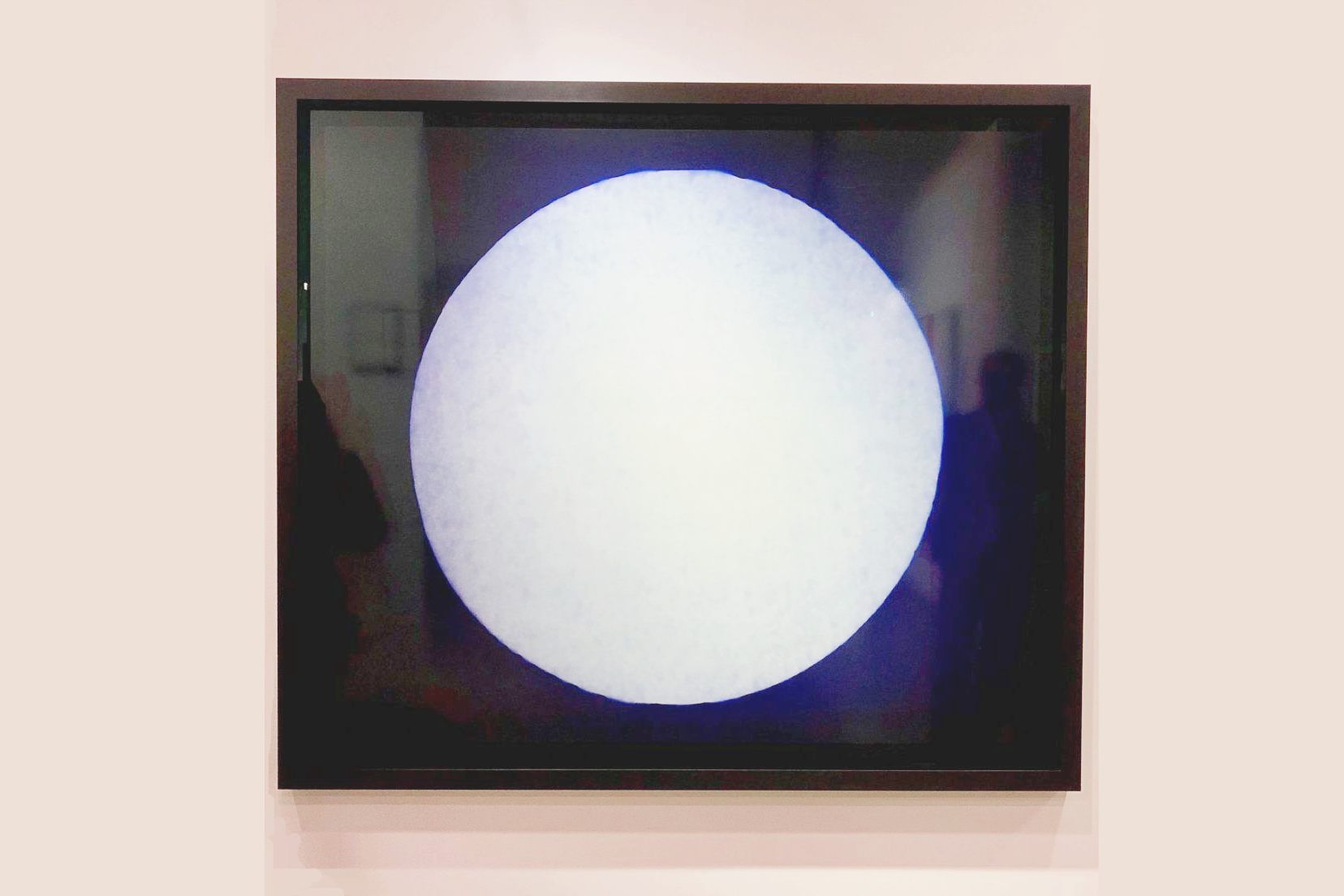 62-year-old English artist Fabian Miller achieved international acclaim in the 70s for his works that bring back the most ancient technique for photography without using cameras or film. Miller creates abstract pieces using methods taken from the early days of photography, by passing light through objects or filters onto photo-sensitive paper. The result here is a stunning orb against an azure sky. It’s truly a mesmerising work, as if it was emitting its own light.
Ingleby Gallery, Booth 3C10 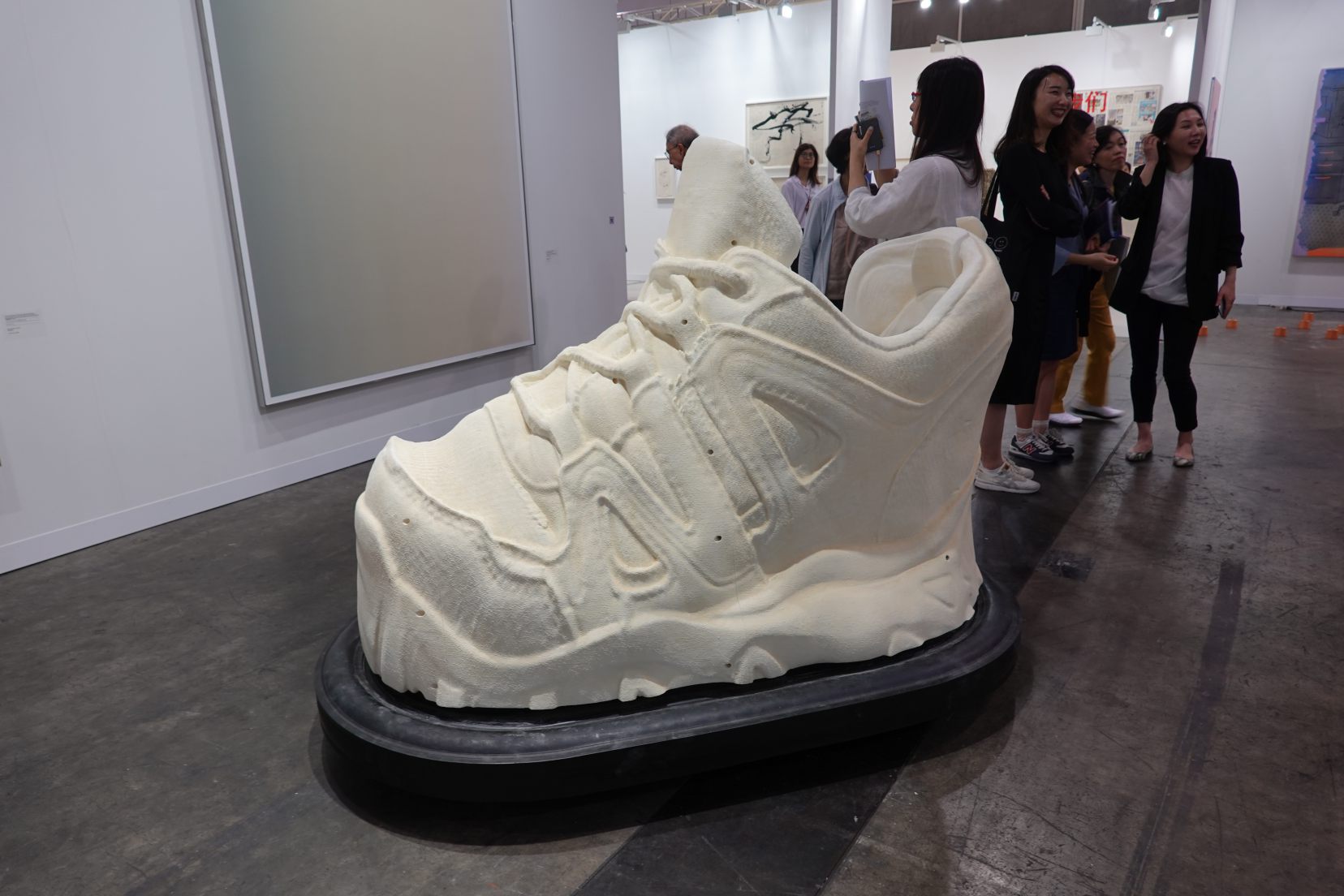 Hong Kong-based sound artist and composer represented Hong Kong at the 57th Venice Biennale in 2017 as well as showcased his work for the BMW Art Journey in 2015’s Art Basel Hong Kong. You might catch Young’s sculptural piece, “Music while you work,” a refurbished, drivable bumper car fashioned as a ceramic sneaker, zooming around the fair playing its own audio tracks. A reminder that art can be all about pure fun.
Edouard Malingue, Booth 3C07

Located in the Discoveries sector focusing on up and coming artists, 28-year-old Peng Yihsuan creates stunning marker on whiteboard works. But look closer through the chaotic, lush texture of the drawings and you’ll learn they depict some of the most horrific events that have occurred in Taiwan since Peng’s early memories, ranging from the severe typhoon Meranti in 2016, or the catastrophic Hualien earthquake just last year. Using an impermanent method of expression, Peng aims to blend retrospective memory with images presented by the media, emphasising the easily forgotten nature of these reports.
A+ Contemporary, Booth 1C50 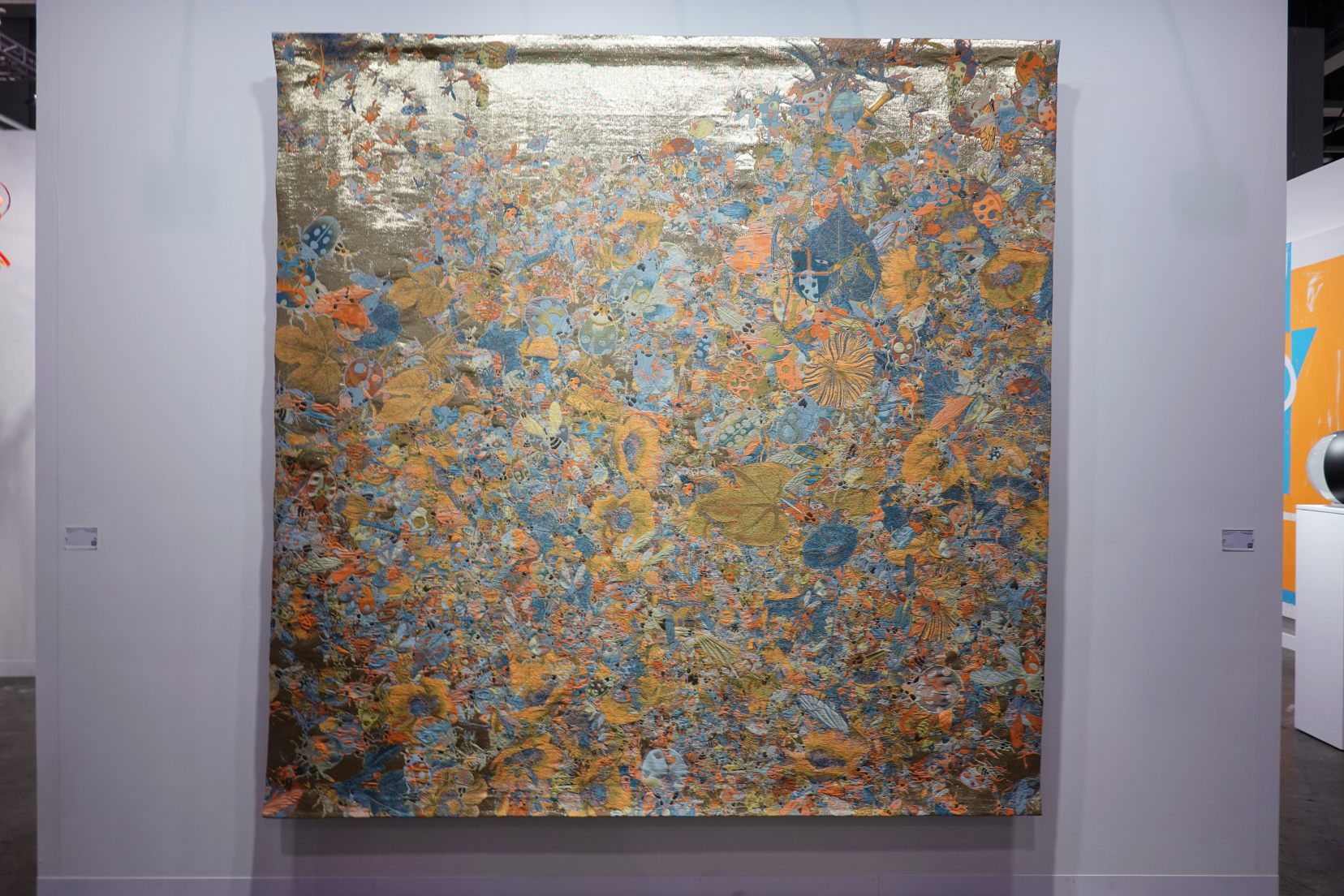 A gilded tapestry of ladybugs, dragonflies, nondescript insects and flora makes for a sight that’s rather revolting (if you hate bugs) but nonetheless gorgeous work of art that draws you in the longer you consume every detailed inch. Digitally woven, the LA-based artist Pae White is invested in creating a randomised, digitised “noise” made of bugs and plants — it’s calming, meditative and perturbing and uncomfortable all at once.
Neugerriemschneider, Booth 1B18 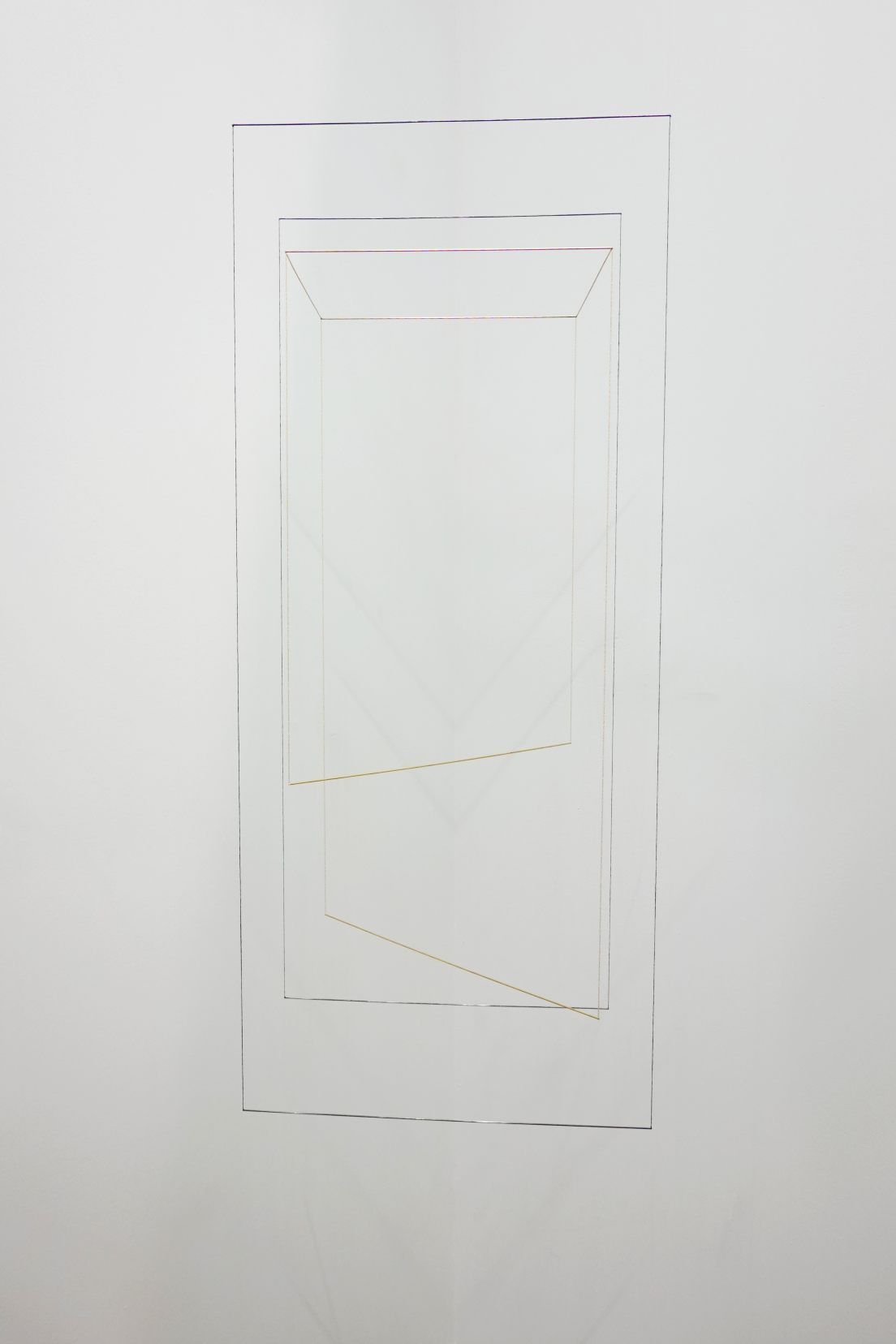 There’s no good way to photograph Jong Oh’s fantastically delicate sculptures — made of metal links so thin and dainty they show up more as shadow than substance on a camera. Mauritania-born Korean artist Jong Oh is most interested in exploring the relationship between the spectator and the installation space, and creates one of a kind in situ works that differ depending on the space allowed. They are jawdroppingly beautiful in person: true minimalist pieces that are carefully dangled on taut, invisible fishing wire.
Sabrina Amrani, Booth 1C41 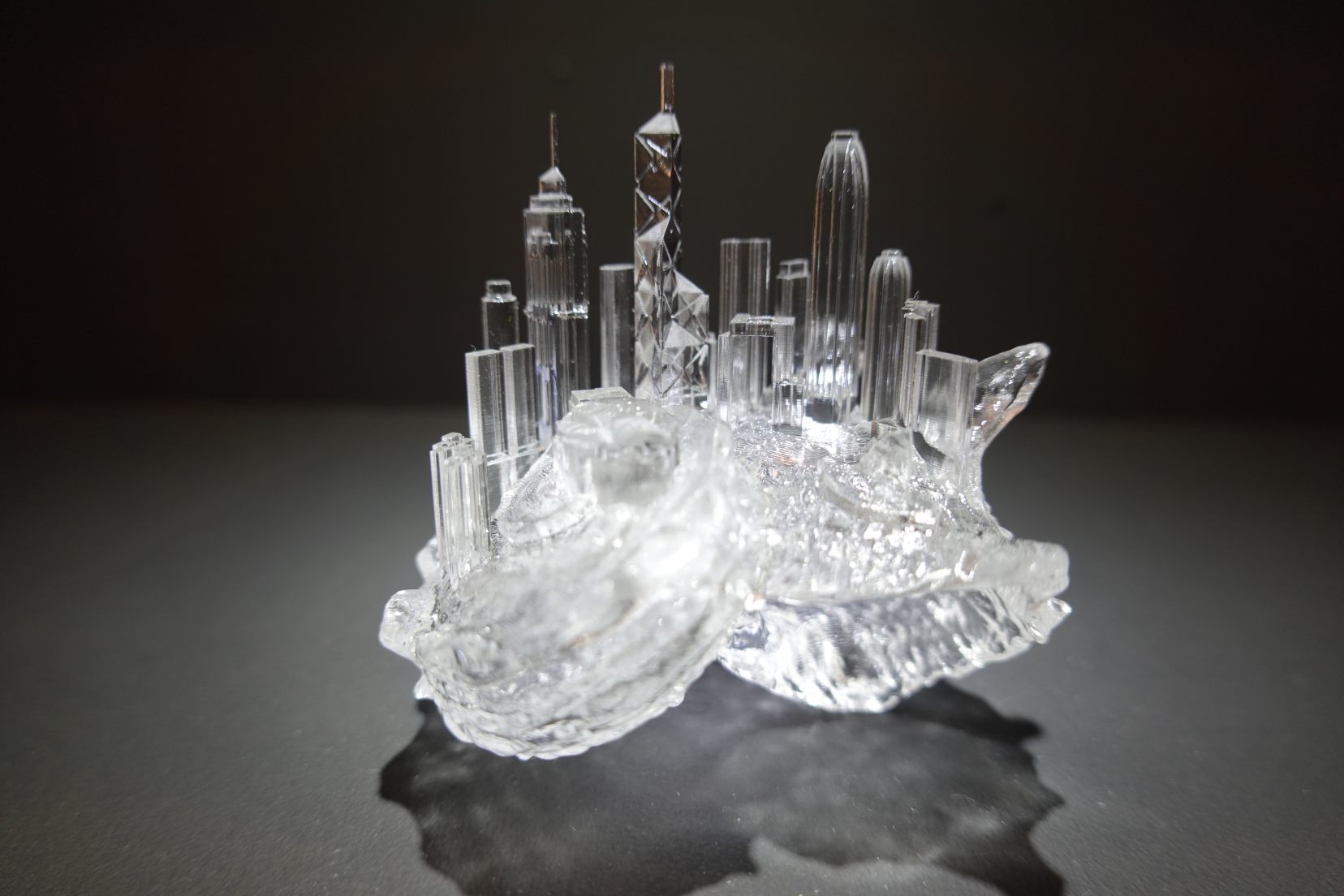 Aki Inomata, “Why Not Hand Over a “Shelter” to Hermit Crabs?”

Tokyo-based artist Aki Inomata is a forerunner in what’s known as “bio art,” often collaborating with animals in her works, studying the commonalities between living things. In this remarkable series she creates shells for hermit crabs to live in, with intricately sculpted shells representing major cities around the globe.
Maho Kubota, Booth 1C42 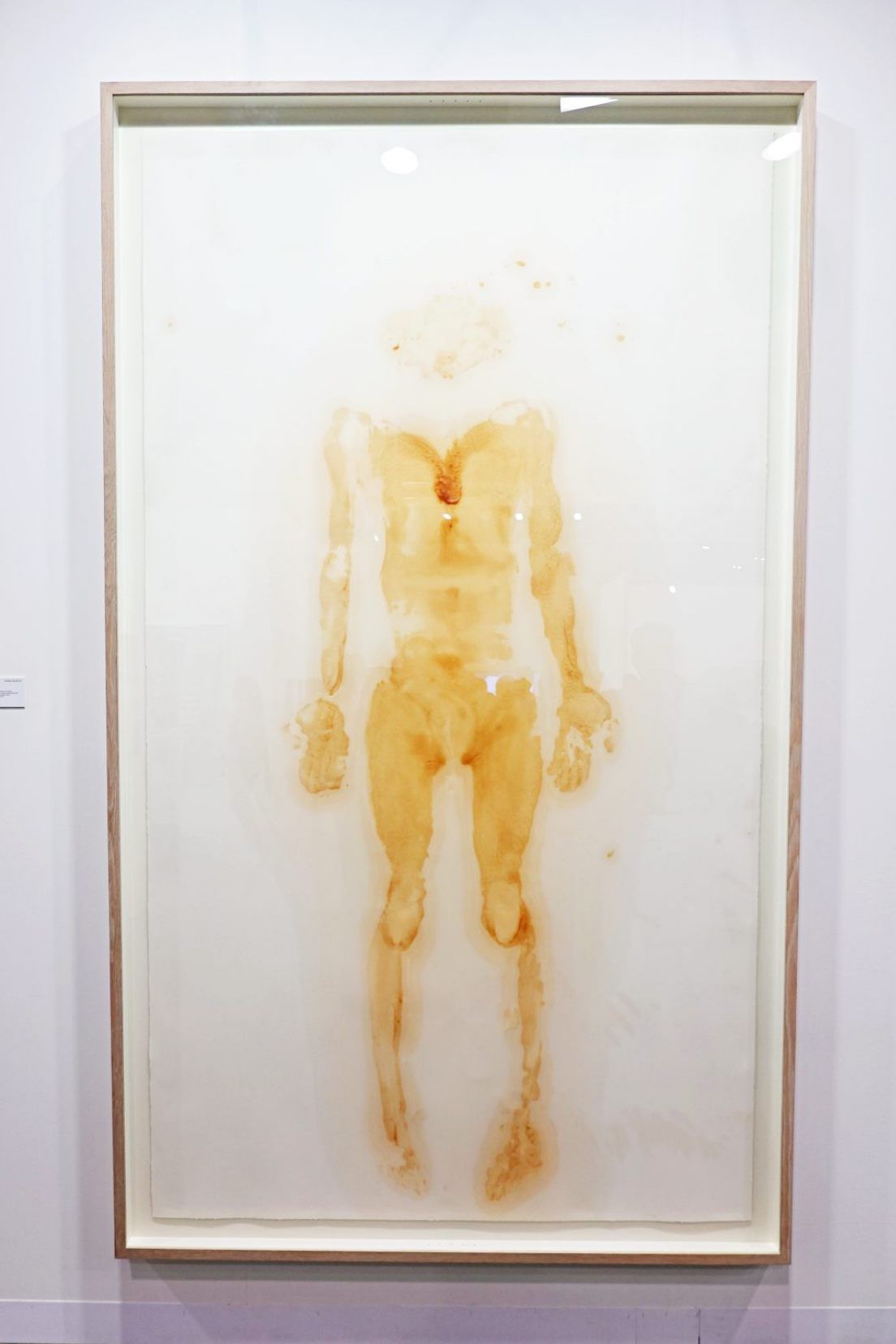 Hong Kong is no stranger to the rather eerie effigies by British artist Antony Gormley. Most may remember his 2015 project “Event Horizon” that brought 31 metal sculptures to the city’s rooftops. Here, Gormley’s crude oil and petroleum jelly monoprint of his own body was created by Gormley falling directly onto the paper, bringing to mind the holiness of The Shroud of Turin. The use of crude oil to leave the imprint references human dependency on the planet’s natural resources.
Alan Cristea Gallery, Booth 1B35