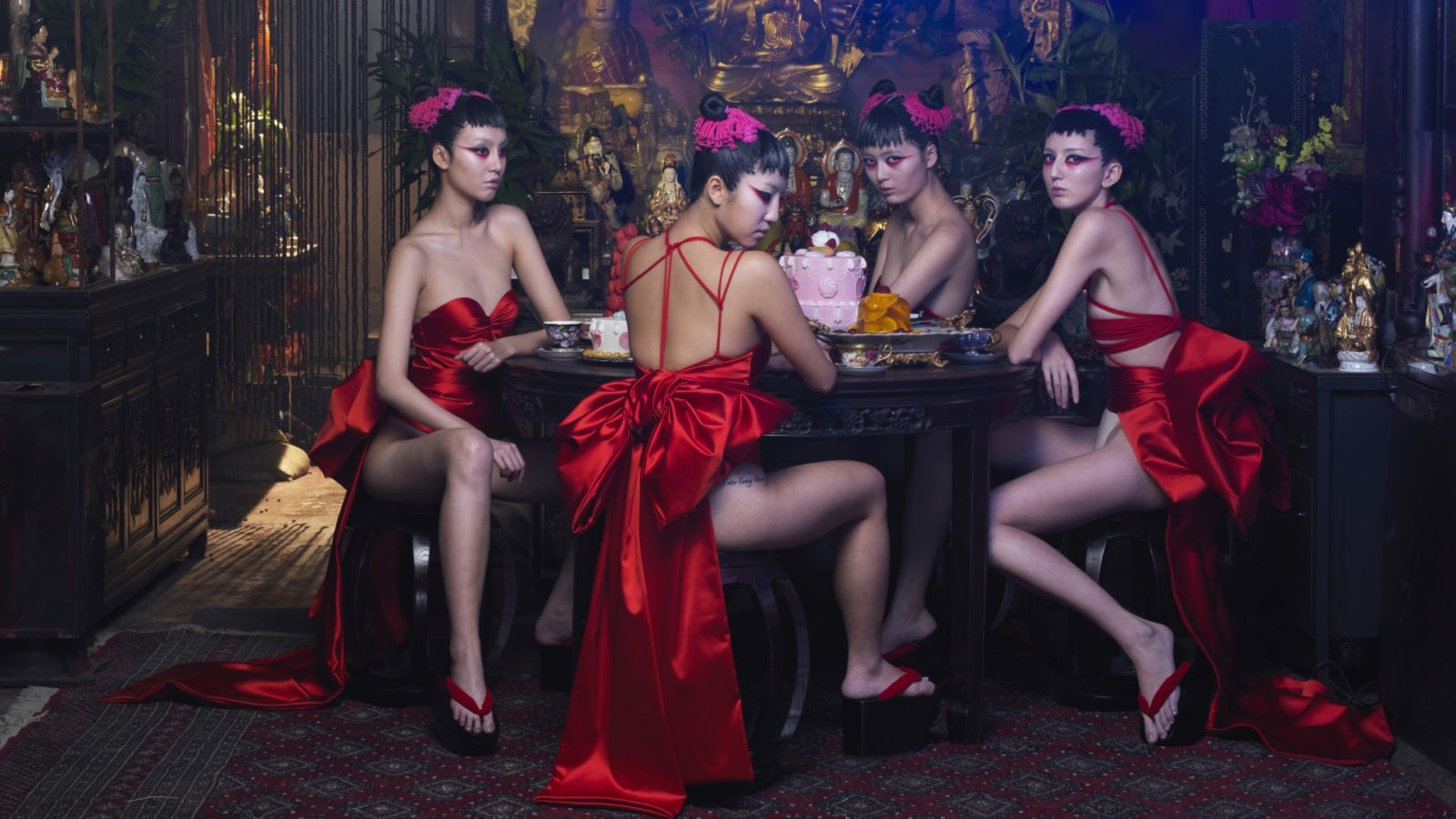 Great art and great artists are often, quite literally, a product of the world around them, whether it’s Van Gogh who captured scenes from his asylum at Saint-Rémy-de-Provence in ‘Starry Night,’ or Georgia O’Keeffe who drew inspiration from Hispanic culture surrounding her New Mexico home. Hong Kong, too, has its fair share of artistic admirers. We’ve rounded up a list of ten artists who — through handcrafted pieces or photography — have expressed how they feel about Hong Kong. Scroll down to see who they are.

The first artist on our list is ‘the great master’ Fan Ho. Born in Shanghai and raised in Hong Kong, Ho is considered one of Asia’s most prolific street photographers. His love story with the city began in the early 1950s when he laid the foundation for his signature style: Compositions that comprised of unexpected backlit subjects set against geometric and textured backgrounds.

Known as the ‘Cartier-Bresson of the East,’ Ho’s quintessential pieces focused on capturing the beauty in the mundane, from hawkers selling fruits and vegetables to little children running and playing on the streets. By the time he was 28, he had won around 300 local and international awards for his works, all of which are now considered almost an historic record of life in Hong Kong. He also taught photography and filmmaking at a dozen universities. His work is featured in M+ Museum in Hong Kong; Bibliothèque National de France in Paris, France; San Francisco Museum of Modern Art in the United States and many more.

Hong Kong-born Wing Shya is known for his diverse artistic portfolio that transcends photography, film work, art, and fashion. He has worked with icons such as Wong Kar-wai, Karen Mok and Vanessa Mae, among others, who were drawn to his alterna-culture aesthetic. Treating each piece as a mini film almost, his work captures its subjects using expressionistic techniques and compositions. His latest project, ‘Sweet Sorrow’, features images that introduce Hong Kong through the lens of a dystopian fairy tale, showcasing the seedier side of the city that inspires his work.

His creations have been featured in museums and galleries like the Mori Art Museum in Roppongi Hill, Japan, Louise Alexander Gallery in Italy, and Ooibotos Gallery in Hong Kong, as well as fashion magazines such as Vogue Italia, 32c, Numèro and Time Style and Design. He has also worked with brands such as Louis Vuitton and Maison Martin Margiela, among others.

Canadian photographer Greg Girard was first introduced to Hong Kong as a teenager in 1974. He saw the less touristy aspects of the metropolis, such as the Kowloon Walled City, and officially began adding to his collection of Hong Kong photography that would later comprise ‘HK:PM’ — a book that captures the social and physical changes in Hong Kong’s nocturnal life in the 1970s and 1980s.

He is also known for his work with Ian Lambot on ‘City of Darkness: Life in Kowloon Walled City’ and ‘City of Darkness Revisited’. Despite having also worked with fashion magazines, his books stray from the expected veneer of Asia’s World City. He has also covered other parts of Asia such as Tokyo (in ‘Tokyo-Yokosuka 1976-1983’) and Shanghai (in the acclaimed ‘Magenta’s Phantom Shanghai’). His work has been featured in National Geographic, Time, The New Yorker and exhibited at the International Centre for Photography in New York, the Yixian International Photo Festival in China, among several others.

German photographer Michael Wolf has produced several notable pieces revolving around Hong Kong and its unique urban phenomena. His projects were able to capture the essence and nuances of Hong Kong from an architectural and cultural standpoint, showcasing the duality that is present in the city. For instance, while ‘Architecture of Density’ presents an abstract look at the unchecked growth of high rises in Hong Kong, ‘Corner Houses’ explores the contrast of vintage buildings against more modern urban development.

Along with publishing 30 books and receiving international awards for his work, his photography can be seen in collections at the M+ Museum in Hong Kong, the Metropolitan Museum of Art in New York,  the Museum of Contemporary Photography in Chicago, the Folkwang Museum in Germany among many others.

Romain Jacquet-Lagrèze is another artist who fell in love with Hong Kong after moving to the city. He is known for his work capturing the city’s urban landscape. His initial projects capture how Hong Kong architecture interacts with the natural world around it — like how the entire city-scape appears to change colour at dusk in ‘The Blue Moment‘ or how the high rise buildings seem to “race to the sky” in ‘Vertical Horizon‘.

His recent projects, however, have seen his photography evolve. ‘City Poetry‘ in particular has the artist capturing signboards with traditional Chinese calligraphy and combining them to create poems. Jacquet-Lagrèze’s work has been displayed at the Blue Lotus Gallery in Hong Kong, the Hong Kong Visual Art Centre, the Carrousel du Louvre in Paris and Art The Hague in the Netherlands among several others.

Self-taught Hong Kong artist Bao Ho was first introduced to street art in Italy in 2014. Within a year she had developed her own signature style that relied on a melding together of different human body parts, animals, flowers and patterns to create her murals and illustrations. Her work, which is instantly recognisable, has somewhat of a childish, whimsical flair to it. The former graphic designer has said that she tries calling on her emotions to help create her paintings, hence the freestyle nature of her work.

Known as the “Queen of Hong Kong’s street art scene”, she rose to prominence after winning the Hong Kong leg of the Secret Walls art battle in 2015 and has, since then, gone on to collaborate with a large number of brands and galleries eager to showcase her work. She has also gone on to design a number of illustrations for her several print series. Her masterpieces have been used by Nike, Tumi, French May, 20th Century Fox, the Brisbane Street Art Festival and the Hong Kong Youth Arts Foundation among many others.

Her ‘Organic City’ series focused on creative combinations of nature with her paintings’ primary subjects: Hong Kong’s concrete buildings. Her latest series ‘Back Alleys Backstage’ features the city as the background of the various stories playing out in its small winding alleys. Her work has been featured by the Blue Lotus Gallery, Gallery Exit and Pékin Fine Arts and more.

Esther Poon is what is known as a yarn bomber. Yarn bombing or knitted graffiti is when artists cover handrails, trees, light poles or any other public city fixture with what can be described as crocheted jackets or covers. Usually done in bright colours to distract from the otherwise monotonous landscapes, yarn bombing is still relatively new to Hong Kong with Poon being the first to take up the craft in 2012.

Poon’s work can be found around Hong Kong, especially on handrails in Causeway Bay and Sheung Wan. She has also had installations at Cat Street Gallery and the Brick Lane Gallery in Hong Kong.

Local sculpture artist Go Hung is known for using everyday materials to create pieces that highlight social issues in Hong Kong and in the rest of the world. A common element in several of his “street sculptures,” as he likes to call them, is a towel that he creates from cardboard and other materials which will usually feature a drawing or quote in the artist’s own hand.

After being constructed from materials found on the streets of the city, the sculptures are then taken back and scattered throughout the metropolis a comment on modern consumerist lifestyles — which also makes them easily accessible to art lovers. Go Hung has also been featured by the Hong Kong Arts Collective, HKWalls Hong Kong, local art and design studios such as CeeKayEllo, among others.

Jonathan Jay Lee‘s work presents Hong Kong life through a noir-esque lens. The Hong Kong illustrator relies on comic book, manga and graphic design techniques to put together realistic pieces which look as if they popped out of the pages of a graphic novel. Lee cites pop culture as one of his main inspirations behind creating illustrations that everyday Hongkongers are drawn to.

His illustrations revolving around Hong Kong tend to feature the city at different periods of time, sometimes incorporating unexpected comic book elements to give it an air of fantasy. The city also serves as an inspiration when it comes to print work, including those he has created for publishers like Marvel Comics and Heavy Metal Magazine. His other clients include Hong Kong Jockey Club, Black Sheep Restaurants, Allianz and Philip Morris. His work has been featured at restaurants such as Brickhouse and Ho Lee Fook, No Borders Gallery and at the Fringe Club, among many other venues.