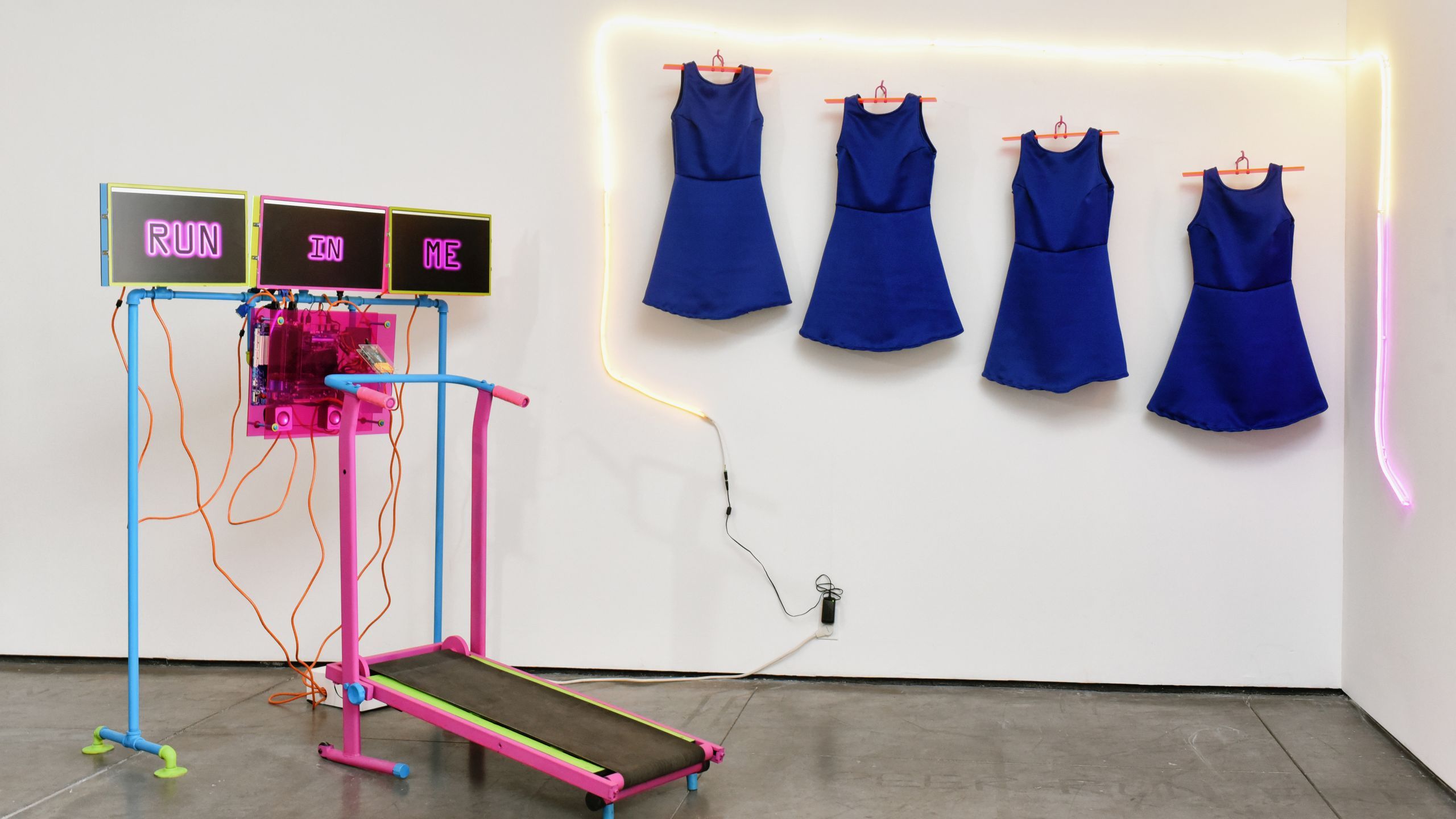 It’s not just the weather that’s starting to send a chill down our spine — this month’s roster of art shows run the gamut of explosive, spirited performance happenings to brutal investigations of the psyche in pitch darkness. From Daido Moriyama to Frog King, check out November’s top art exhibitions to see in Hong Kong.

Frog King, aka Kwok Mang-ho, is Hong Kong’s most recognised performance artist. A new body of work is set to festoon the 10 Chancery Lane Gallery space, with his signature bold splashes of paint, stamped prints and unique calligraphy which blends Chinese and Western cultures. Originally trained in ink painting under the tutelage of ink master Lui Shou Kwan, Frog King’s persona emerged when he moved to New York’s East Village in the 1980s, created as an identity for him to wear and embody his art through wigs, layers of handpainted clothing, jewellery, and of course, his pièce de résistance, the handmade ‘Froggy sunglasses.’

It was home to 35,000 people at its peak and had no discernible governance, yet it thrived with makeshift essentials that catered to its residents from healthcare to religion — and hard drugs, if you wanted it. No other dystopian superstructure has been as revered and referenced throughout popular culture as the notorious Kowloon Walled City. Canadian and British photographers Greg Girard and Ian Lambot set about to document the ‘organic megastructure’ before it was demolished in 1994. Here at Blue Lotus Gallery, the duo will be exhibiting that seminal body of work which has reached cult acclaim. More info here.

Osaka-born artist Shozo Shimamoto is credited as one of the co-founders of the original avant garde Gutai group in 1954. After the war, the group turned to the materiality of paint itself as a medium, working on the notion that creation goes hand in hand with destruction. Shimamoto was also part of the Mail art movement, where artists exchanged small artworks through the postal service. Through this correspondence, he was voted to become the Secretary General of the Artist Union, which was later renamed to the Art Unidentified group. This exhibition at Whitestone Gallery showcases the work of Shozo Shimamoto with pieces created through live performance from four AU members.

When: Viewing available through 14 November

The yearly fundraising auction for Para Site poses the opportunity to own exceptionally curated art, but also supports one of Hong Kong’s leading contemporary art incubators in their upcoming activities. Catch the collection of 90 donated works — sourced from local and international artists and galleries — with pieces such as the bright landscapes by essayist and painter Etel Adnan to shrouded NBA players in Paul Pfeiffer’s Four Horsemen of the Apocalypse series; as well as local luminaries Firenze Lai and Ellen Pau. The live auction will take place at a gala dinner on 15 November, while pieces are available for online bidding at Paddle8. Preview pieces in person at Soho House Hong Kong from 6–14 November.

Rossi Martino (Rossi & Rossi’s European arts division) presents works by Italian artist Massimo Antonaci that trace his early glass installations to recent works on papyrus. The genre-crossing pieces reveal the artist’s evolution as an artist, poet and philosopher, completed as he travelled throughout his career on several pilgrimages in search of metaphysical meaning. It is his second show with the gallery in Asia.

Work by Vunkwan Tam, ‘Are you addicted to caffeine, nicotine and the idea of the city as a metaphor for your body?”

Eaton HK’s contemporary art space Tomorrow Maybe presents a multi-sensory exhibition with new artworks from six emerging Hong Kong artists. Each artist has worked with curators Alex Yiu and Suze Chan to reflect on the idea of ‘Profanation’. According to the Italian philosopher Giorgio Agamben, it is an act of taking sacred things from the gods and turning it into mortal usage. This exhibition is the result of these artists’ kaleidoscope of interpretations.

This solo exhibition of new installations and mixed media works by Hong Kong artist Christy Chow poses questions on ethics and gender in the artificial intelligence era. Presenting works created during her artist’s residency in Germany, Chow reinvents the concept of a female cyborg, commonly seen as sexualised forms in popular culture. She tackles the subject with humour and critique, focusing on the cybernetic transformation of women today, and how humans navigate physiological and perceptive limitations.

Italian philosopher Giorgio Agamben’s theories come to life again in this exhibition at Aberdeen’s black box The Empty Gallery. Philippe Grandreiux drew inspiration from the theorist’s notion of the ‘sacred man’ to create a series of moving image works that fashion the gallery into house of horrors of sorts. The exhibition is a haunting place between dream and nightmare, where primordial shadows and twisting, life-sized bodies act out curious choreographies. Upstairs, ‘The Scream (2019)’ is a piece created especially for the gallery, where the viewer is surrounded by a sequence of eleven staggered projections to create the sensation of blurred time. Downstairs, themes of anxiety, violence and intimacy come to life in three single-channel works.