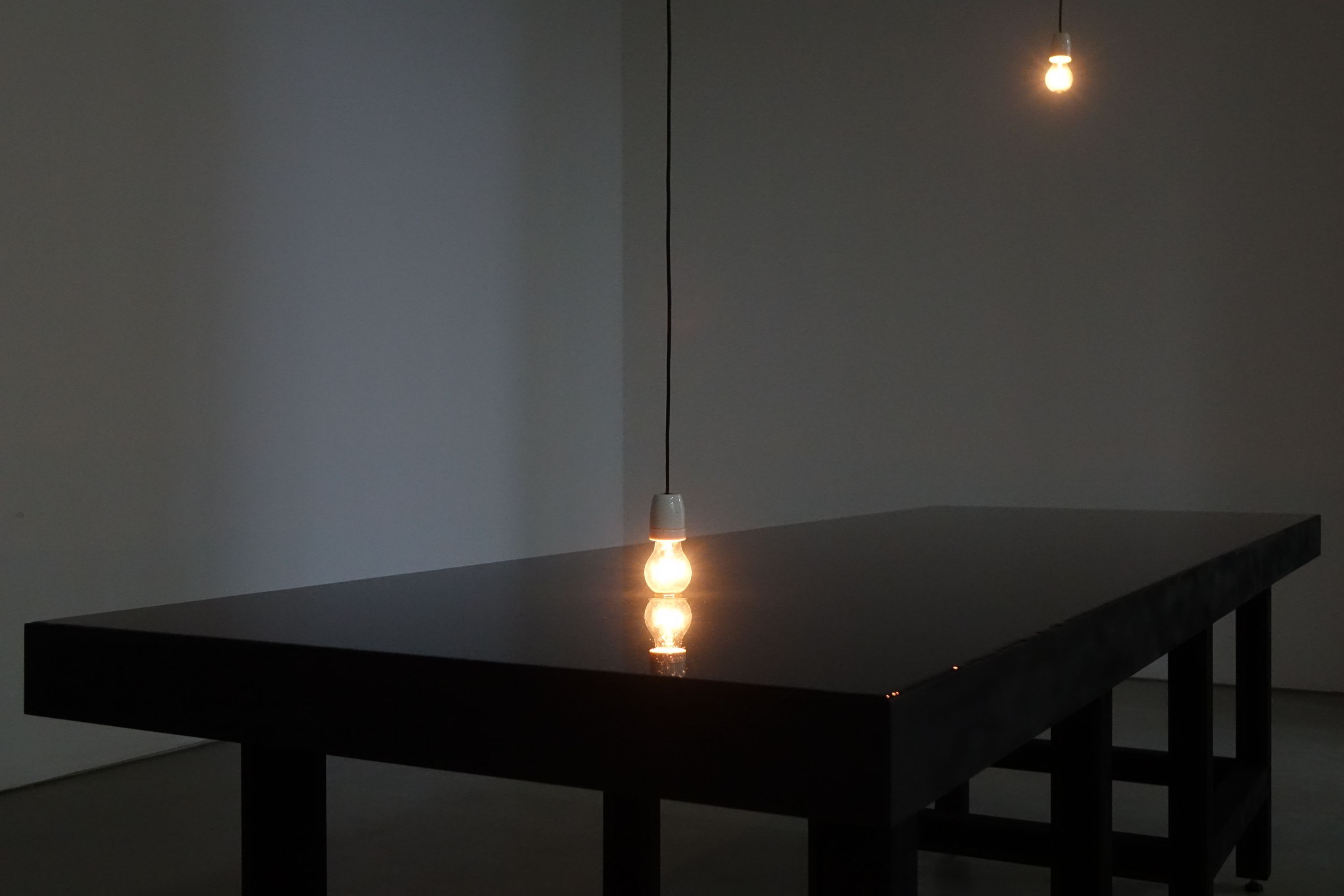 Wang Gongxin is considered to be one of the forerunners of video and new media art in China. His piece, “The Sky of Brooklyn” (1995) particularly cemented Wang’s reputation within the realm of experimental art: It was a site specific work where he dug a 3.5-metre hole in his home in Beijing and placed a screen playing footage of Brooklyn sky at the bottom — reflecting on his time living in both China and the US, and examining the social and cultural disparity between the two places.

Before this, Wang Gongxin painted. Born in 1960, he was trained at the brush under the socialist-realist style and taught at Beijing Normal University. It wasn’t until the early 90s when he truly began to explore other mediums, and from socialist oil paintings to video installations, it’s natural to wonder what was it that led him to abandon the brush altogether? It’s this period of lesser exhibited installation work that’s the central focus of ‘Rotation,’ Wang Gongxin’s debut solo show in Hong Kong at White Cube.

“Not many people had seen works in this period before — some of his early pieces were exhibited only in Germany and America, and once in China. From then, it was all focused on his video work,” says Laura Zhou, one of White Cube’s directors who led the show’s press preview last week. Before Wang launched fully into video art, between the early- to mid-90s he experimented with a variety of materials for mixed media installations — incorporating moving light bulbs, metal containers, ink and other liquids to create animated and illuminated pieces.

Zhou’s recent visit to Wang’s studio revealed that he had been making pieces which connected to his older installations, but also matched with his oeuvre of video altogether. “Gongxin told me that it was 20 years after the development, and he would really like to restart,” says Zhou. Wang himself likens ‘Rotation’ to a process of spiritual ‘reboot.’ As he says in his artist’s statement: “No matter how fast and rapid change is, people who use computers must know that the best way to optimise your system is to ‘empty’ and to ‘reboot.’ Through ‘Rotation’ at White Cube Hong Kong, I perform a self-optimisation and a reboot on my own twenty years of artistic creation!”

The first room holding the first piece you see, “Dialogue” (1995) is perhaps the quietest, meant to draw solitude as you observe a quietly whirring conversation between lightbulbs. It’s a long metal table itself holding a pool filled with dark inky water all the way to the brim. Two light bulbs are attached to a motorised mechanism at the ceiling, and are slowly, alternately dipped into the ink before rising up again, creating soft ripples that precariously push the water to the table’s edge. Wang had to painstakingly test the mechanisms from all sides to get it right — so that not even a drop of water would spill over the edge.

As Zhou comments, “It’s a very zen piece, requiring quietness and peacefulness, but at the same time, you feel a little bit dangerous as well: The water is filled just to the brim of the table, and if you pour any more in, the water will come out. How much the light bulb is lowered into the water is related to whether it will break or not. Also, when the light bulb touches the water, it creates a wave that pushes water to the side. The wave can’t be too much, but you also need a little bit of wave of movement to show that it is water. That’s the most important element for this piece.” She says this quiet tension allows everyone to draw from your his/her own experiences to interpret the piece — whether of a dialogue, of a delicately balanced relationship, an encounter from your own experiences, or even a metaphor for international politics.

Created at a transitional time in Wang’s practice, it reveals his constant sense of discomfort in a new environment, as well as his self-conscious avoidance of ‘Chinese’ cultural references in his visual language. Made with the intent to go as far as possible from the then-dominant artistic styles of art in China, the pieces exhibited in ‘Rotation’ are beautifully open-ended, though yes, frustrating as you soon find out: It’s this sense of silent and controlled tension that sets the tone for the rest of the exhibition. For example, the 2006 video piece, “Tonight, Maybe Have Wind” — placed where you turn up the stairs — plays with time and our perception of it: speeding up and abruptly slowing down footage of storm-tussled tropical trees.

“Dialogue” was in fact the second and larger extension of “Unseatable” (1995), the first work you see upstairs, an installation of four metal chairs facing each other, with a lightbulb precariously circling over the formation, as if about to knock into any of the chairs. Two seats are filled with a pan of that same black ink, while the other two are filled with a white milky liquid, reflecting the light in different effects.

“Everybody asks me what the meaning is, but there’s none — just look at how the installation is so quiet and peaceful, but psychologically you’ll feel that moment of hesitation, of sensitivity and tension. This is what I wanted to create,” says Wang.

But from the pas de deux of dialogue, the theme soon starts to work itself towards the idea of contradictions, of traits that cancel out, creating a slight sense of uncomfortableness (especially to those with self-professed OCD who like things to be even and straight) that’s especially evident in Wang’s 2017 works. All the while, the pieces carry through old motifs.

With “Horizontal,” a Ming-dynasty table is propped up with a stone on one leg; another leg is shorter than the others, and the surface is uneven. On top, a tray of that same dark inky liquid evens out the slanted surface. A mechanism under the table shakes it in just the right way to create split-second patterns in the water. “If something loses its balance, then for me, I try to bring it back. If the water doesn’t move, it’s like something that’s dead — it’s not a live material. By shaking it, you can tell that it’s water [because of the ripples created]. That it’s a live liquid,” says Wang.

Next to it, “In and Out” is an old wooden bench tilted on its side, the end of the bench coloured in white at first glance, but it’s actually been replaced with a piece of marble cut to mimic the texture of the missing chunk of bench. At the other end, a hole was cut in the wood where a lightbulb is repeatedly lowered and raised through it. It was an experiment in balancing a vernacular wood with clean stone; an experiment to see how well marble could be made to look like another material, and to restore balance by bringing movement and light to the top section of the piece.

Wang never set out to do a show focusing on the idea of balance, but that same trend of delicately balanced tension emerges when he looks back at his 20 years of practice. It was the artist’s unconscious effort to add life to the piece or to complete something in a way that spoke to him. He says, “This sense of need/desire to maintain this balance is like the constant concern of trying to get the right colour to paint.”

Looking back on 20 years of practice, we ask whether his earliest days of painting had ever influenced his installation work. “There must be some influence and impact on my later works, but in what way, I cannot say either,” Wang comments. “It’s like when you’ve already learned how to ride a bike or drive a car, and you’re trying to suddenly forget how to do it, and you also cannot tell people how you learned it, you just know.”

Whether comforting or aggravating, this unifying sense of tension shows one thing — it’s nice to recognise that we can always be pushed to our limits and not break. And if anything, Wang’s works serve as a reminder that we have to occasionally look back and reboot our practices to see new truths.