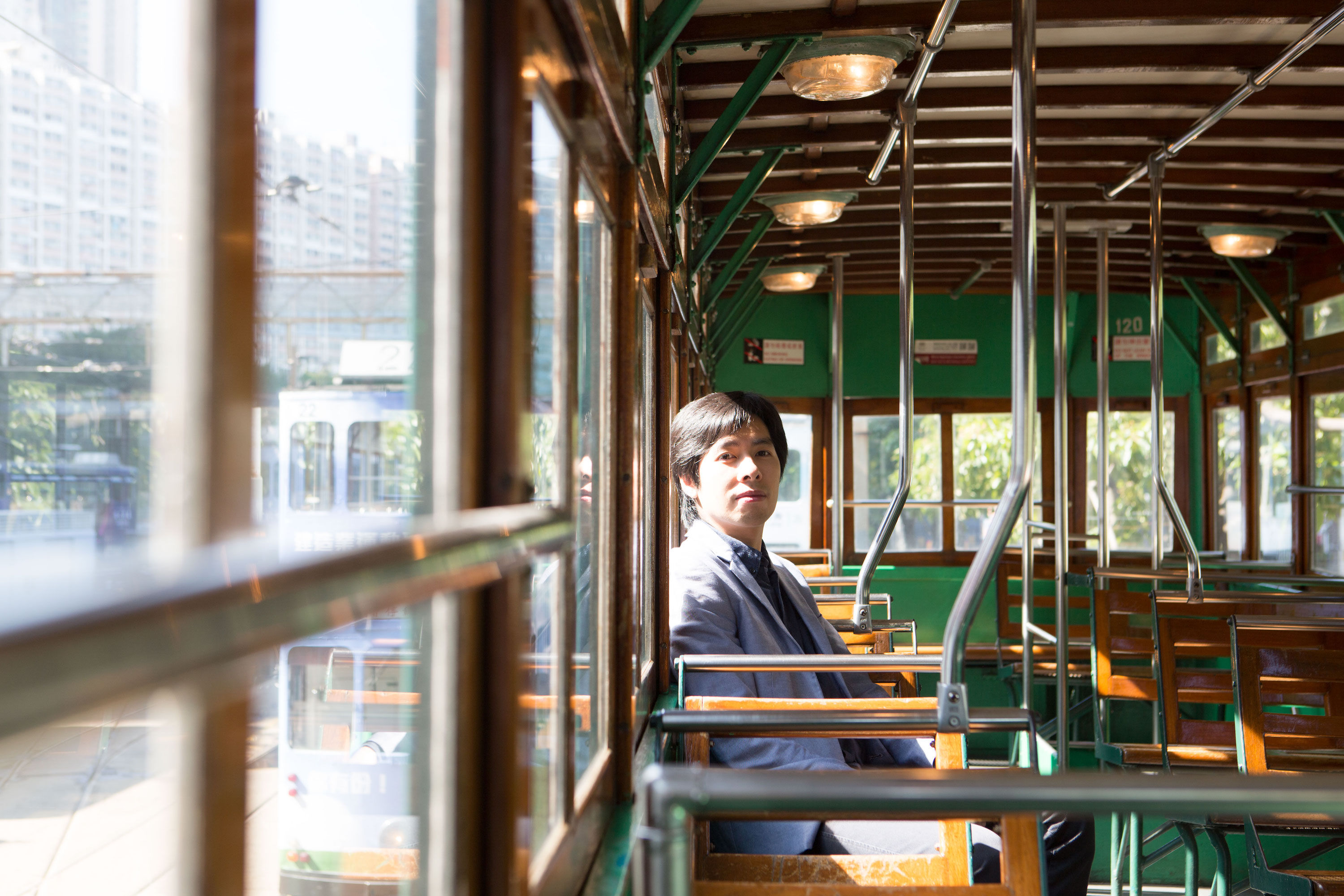 The month of March is known in Hong Kong as a topsy-turvy month for art, spearheaded by Art Basel Hong Kong, which takes place from 23-25 March. During this busy time where those working in the cultural sectors may find it even hard to catch their breaths, Hong Kong artist Kingsley Ng invites viewers to revolve their perspectives, and spend 25 minutes to travel back in time via his tram art piece, Twenty Five Minutes Older, commissioned by Art Basel and MGM Resorts International.

Running between Causeway Bay and Western Market in Sheung Wan from 20-28 March, the site-specific piece transforms Hong Kong’s most classic mode of transport into a camera obscura — a reverse pinhole camera where the image is projected inwards and upside down. This will be accompanied by recorded extracts of Liu Yichang’s celebrated stream-of-consciousness novella, Tête-bêche, which some say inspired the film In the Mood for Love. We spoke with Ng to ask what his work is all about. What’s the story behind the title of this piece?
The title Twenty-Five Minutes Older is inspired by 10 Minutes Older, a 1978 film by Latvian director Herz Frank. It captures the expressions of young children as they go through an emotional journey, watching a 10-minute film invisible to the audience. Later in 2002, it inspired an eponymous homage by British producer Nicolas McClintock. The film is a compilation of short films by 15 celebrated filmmakers, all contemplating what time means to them in 10 minutes of film.

Following on from that, Twenty-Five Minutes Older is also a time-travel experience — not in the sci-fi sense, but in a way that is similar to the cinematic experience in Frank’s film and McClintock’s homage. We travel through time in a 25-minute live cinema with the audience on board, revisit Mr. Liu Yichang’s 1974 novella Tete-bêche, listen to Liu’s protagonists’ nostalgia and anticipation, and rock through the city in a century-old tram that has been going back and forth along the seasoned tracks all these years, everyday.

How did your idea for this piece’s medium, of turning a tram into a camera obscura come about?
Twenty-Five Minutes Older, to be presented in March 2017, will be the third rendition of a work that began as part of DETOUR 2013. The festival had the ambition to transform a number of trams into sites for cultural activities. I had the privilege to be a participating artist, and proposed to experiment with a “live cinema” by making use of the optical phenomenon of a camera obscura on a moving tram. The work was further developed as an exhibit in the 5th Large-scale Public Media Art Exhibition (part of the 20th anniversary celebrations of the Hong Kong Arts Development Council) last year, where the reversal of a camera obscura, Tete-bêche, transience and chance encounter emerged as converging elements.

Being presented for the third time, has anything changed for this commissioned comeback with Art Basel?
In this rendition, we are delving deeper into the text and looking into the nuances of perspectives and parallels. The work is a collaborative work, and its many elements are put together by a wonderful team of cross-disciplinary talents — Mr Liu Yichang who generously shared the extracts, Mrs Liu and her friends who advised on the textual treatment, Steve Hui who composed the music, Chiara Kung who did the voiceover, Valerie Doran who helped on the recording, Jason Wong and Cheuk Wing Nam who made the very complicated technical design look effortless… All this makes it essentially a public work, and hearing feedback from passengers boarding the previous editions, also makes this sense of openness a conceptual principle. Do you have any special fond memories associated with Hong Kong’s tram?
My grandfather used to take us on the tram as a leisure activity, probably around the time when I was in kindergarten. I still remember vividly that was my first lesson on the notion of ROI (return on investment) — he would tell us how it was much more favourable to ride on the tram than on the coin-operated kiddie ride, since you are paying less, and for a much more pleasant journey.

What were the challenges when you were coming up with this piece?
There are many physical and technical challenges — which at the end are always about mediating between sides. In a way, it is very similar to the work’s conceptual quest for conversations between contrasting sides. For instance, a “conversation” has to happen with optimising the number of passengers without compromising the quality of the experience; respecting the original text while reserving openness for each passenger’s experience; making the image as bright as possible without losing sharpness, allowing ventilation without leaking light… The list goes on and on, and the solutions are always about considering different sides. Why did you choose to accompany the experience with this particular text by Liu Yichang, “Tête-bêche”?
“Tête-bêche” is originally a term from philately and refers to a pair of joined stamps, printed intentionally or accidentally in reversed directions. Mr Liu’s story is a form of “tête-bêche” in its narrative structure. The reversal of a camera obscura is also a form of “tête-bêche”. Besides feeling fascinated about these mirroring forms, I am also very stimulated by Mr Liu’s story. It was written over 40 years ago, but in many ways it is like a text about today. There are these lines: “Next to the gold shop is a gold shop. Next to that gold shop is another gold shop…” Mr Liu’s omniscient treatment of the two protagonists, each limited to his or her vantage point, is also inspiring for this city at this moment — can we also observe different ideologies, the past and the present, in a state of flow, where judgment is suspended?

What do you hope viewers can gain from your piece?
I think art is like salt. You don’t need a big dose. Sometimes it is not about getting the most, but getting what is just right for you at a particular moment. Likewise, there is nothing in particular I want people to get out of Twenty-Five Minutes Older. The work is essentially open, and what is beautiful about this is that everyone can make sense of the work with his or her own memories, associations and imagination. But while every passenger can have his or her own takeaway, I hope they can all share a moment of coexistence.

Kingsley Ng’s Twenty Five Minutes Older will run between 20-28 March. Admission to the tram is free, but advance tickets are required and will be available from 6 March; see details at artbasel.com/25mins.