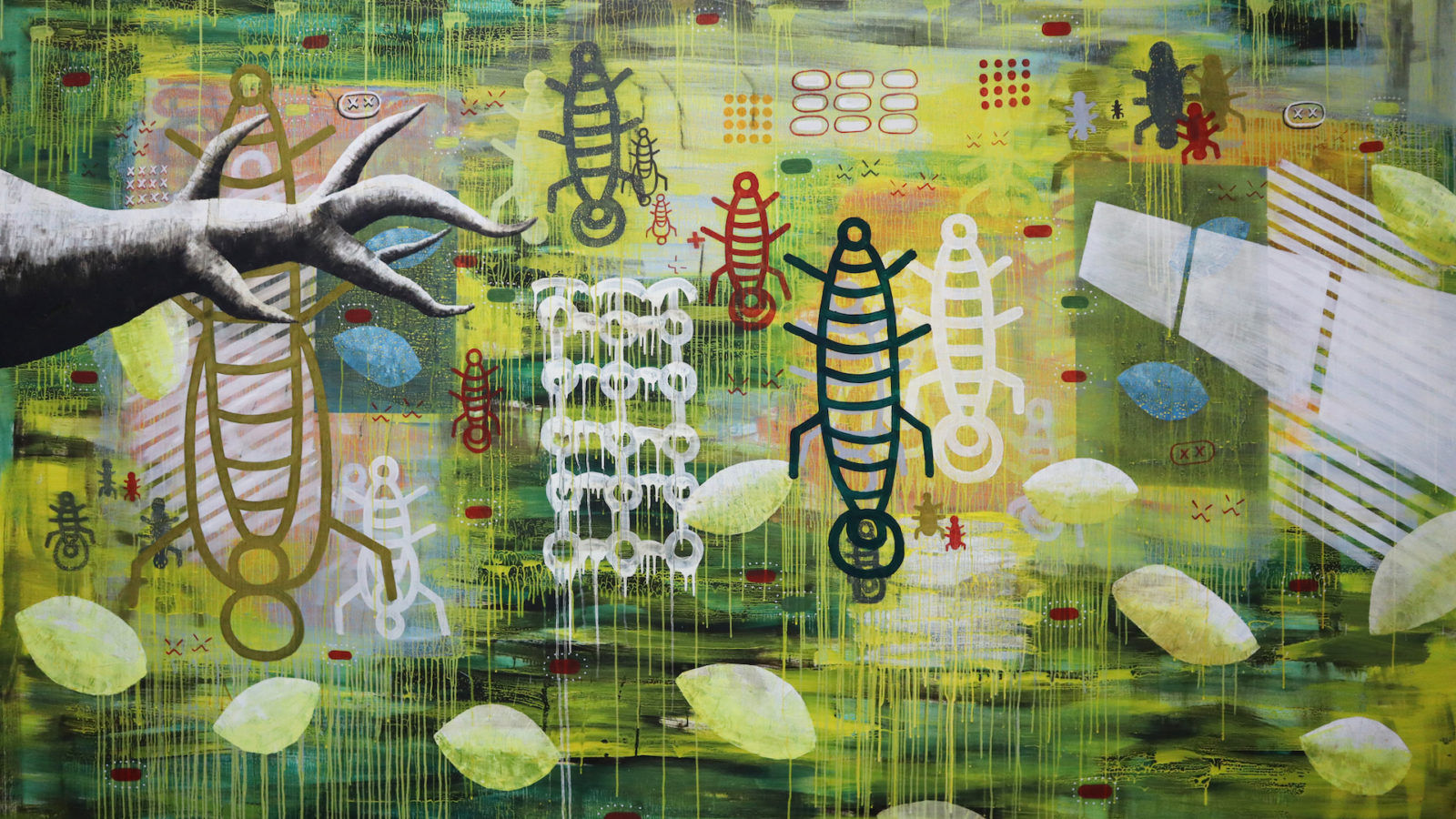 New shows to quench your thirst for art this summer.

For most, July in Hong Kong is all about beach days and junk trips, but we at Lifestyle Asia reckon there’s still a time and place reserved for art. Which is just as well, because this summer, the art world shows no signs of slowing down. In addition to the new exhibitions this month, M+ Cinema’s opening and Oil Street Art Space’s expansion, comes the inauguration of the Hong Kong Palace Museum. Plus, we’ve got the upcoming Affordable Art Fair in August to look forward to. So little time, so much to do.

In her first exhibition in Asia, Swiss-born and Los Angeles-based painter Louise Bonnet focuses on human fluids as the centre of societal disgust. Presented in two groupings of three large canvases, her works explore our sense of mortification at our own bodies and how they appear to betray us by leaking, sagging or other signs of failing.

Works in “Onslaught” depict human-like figures crouched in uncomfortable positions within a confined space; some of these figures emit cones of opaque liquid from their bottoms, others appear to release milk-like liquids from their breasts. “I’m interested in shame and the body in my paintings,” comments Bonnet. “And bodily functions bring extra shame and embarrassment.”

A unique LGBTQ-themed exhibition, “Retrograde” showcases the works of 11 local and international artists from eight nationalities. Instead of simply giving sexual minorities a platform, Galerie du Monde’s show raises questions on the move of homosexuality to mainstream culture, contests the homogenous models of modern gay identities and suggests alternative ways of thinking when it comes to queer histories and futures.

The title “Retrograde” references astrology and points to the motion of planets that bring about a challenge to the sense of normalcy. These planets depart from the main pathway, just like the 11 participating artists who identify differently from what society deems as ‘normal’ and envision queerness beyond the grand narrative.

A Room of One’s Own

For example, during the pandemic, Ding Hongdan focused on the fluid connection between reality and her own identity and gender. Through self-portraits, Ding attempts to reshape the power dynamics in gender. Meanwhile, Liu Youran attempts to look at real life through a feminine lens. In her “Display and Room” series, she separates her depicted figures and situates them in closed spaces, highlighting the status of these women as objects.

Lu Muhua, Wang Su and Zhoy Xinyu, too, address femininity and gender through their own styles of painting.

Beijing-based painter Ma Kelu’s solo exhibition showcases a rare selection of his landscape and abstract paintings spanning from the 1970s to the present. As one of the key members of the avant-garde artist collective No Name Group, Ma is dedicated to remaining faithful to the process of painting and has, over the years, explored the different ways of working within a two-dimensional visual field.

In “Wilderness”, eight collections of paintings from different periods are organised in chronological order to highlight Ma’s evolving approach toward subject matters, surface treatments and materials. From representational landscape drawings to non-figurative abstract illustrations, the artist’s works convey his attitude towards the practice of painting as a “way of existence, a spiritual drift”.

Illuminati Fine Art is presenting an exhibition duology by British-based Hong Kong artist Christopher Ku. Split into two parts, “Painting of Reverberations” debuts over 35 seminal works created between 2002 to the present, in a showcase of the artist’s ongoing experiments in material and painting technique.

The first chapter, titled “Reverberation” (24 June to 15 July), explores painting as an echo of history. Ku applies a powder form, earth-tone material on his canvases, creating an aesthetic associated with pre-historic cave murals. At the same time, he references eastern craft culture by introducing paper-cutting and stencilling into his works, in an artistic negotiation between what he calls ‘high art’ (painting) and ‘folk art’ (craft).

The latter part of the duology, “Semantic Construction” (23 July to 12 August), reflects Ku’s recent state of mind. His newer pieces are charged with freedom, featuring unruled and abstract compositions, a huge departure from his earlier works where he abides by a set of unique visual language. The pursuit of pure abstract has allowed the artist to transcend from the material world and expand upon the techniques of painting the metaphysical world.

In this solo show by Beijing-based Huang Dan, the artist presents her new “Gold” series for the first time. Previously known for her works of ink on paper, here Huang experiments with a new medium, specifically gold leaf on paper. Referencing the use of the colour in iconography, Huang places gold centre stage in her depictions of horses, snakes, monkeys and mountain ranges.

Symbolically, the use of gold projects power with its illuminating and dominating properties. Gold, as a material, also represents the constancy of value, given its role in mankind throughout the years. At the same time, it is adaptable and versatile, and visitors of the exhibition are encouraged to view the paintings repeatedly, to see how they change with the light at different times of the day.

Known for his pastel landscapes, portraits and still lifes, New York-based Swiss artist Nicolas Party is debuting “Red Forest”, his first solo exhibition in Hong Kong. Opening on 30 June, the show comprises 13 new paintings themed around the five elements of the material world: wood, fire, earth, metal and water, all of them exploring the complex ties between nature and humanity.

Growing up in Switzerland imparted Party with a fascination with the natural world. Amid the current climate crisis, “Red Forest” presents the artist’s depiction of forest fires and l’heure mauve (mauve twilight, the moment of transition from day to evening), dressed in his signature pastel shades.

An extension of the gallery’s first showcase of the late Raoul De Keyser’s work in Hong Kong in 2021, David Zwirner is once again bringing the Belgium artist’s masterpieces to the city. Among the specially curated works on view are De Keyser’s “Come on, play it again”, “Hayward” and “Hellepoort” series, made during the height of his career from the mid-1980s to the 2000s.

Known for his tempered works of simple shapes and painterly marks, De Keyser constantly challenged and expanded on the possibilities of the medium of painting. In his “Come on, play it again” series, the artist relies on biomorphic and geometric forms, lines and dots; while his “Hayward” series, created in 1993, features planes of paint that hug the edges and margins, in an example that displays De Keyser’s radicality when it comes to paint.

When: 8 July to 4 September

Tai Kwun’s new summer exhibition is all about trees and the complexities that arise from their preservation. Trees and humans have an established relationship, whether physically, biologically or emotionally, as they provide us with food, shelter and clean air.

The exhibition, whilst exploring the vital role that trees play in our daily lives, takes visitors on an educational journey of the ways we can protect, preserve and nurture them; at the same time, the show provides the audience with a unique opportunity to examine humanity’s appetite for nonstop consumption and thoughtless expansion.

One art group and two individual artists, Marshmallow Laser Feast, Lau Chi Chung and Zheng Bo, explore trees through their own art style. Marshmallow Laser Feast brings the Giant Sequoias to Hong Kong via a VR installation; Lau Chi Chung captures the ruins of architectural structures left in nature through his camera lens; and Zheng Bo puts pencil to paper and sketches out portraits of trees continuously from sunrise at 5:40am to sunset at 7:10pm.

For the Hong Kong fans out there, local artist June Ho is introducing a solo presentation, “Goodbye, Hello”, focused on her experiences growing up in the city. Now in her early 30s, Ho has spent over three decades navigating Hong Kong’s roads, taking in the scenery and watching the movies. Her exhibition of prints depicts freeze-frames of cultural icons and daily life, from the famous view of Victoria Harbour to the more mundane, down-to-earth everyday scenes.

“Once there was an elephant at Hong Kong’s Lai Yuen Amusement Park, now there are only walls of graffiti that have been whitewashed over; once Hong Kong was a fishing village, now Hong Kong is packed with housing estates; once there were mountains and ancient houses in Hong Kong, now there are railways and high rises,” says Ho.

Hong Kong Art Exhibition Exhibitions Artwork Art Exhibitions to See Art Gallery Hong Kong
Charmaine Ng
Editor
Charmaine enjoys eating steamed broccoli and knocking back cups of spearmint tea, all in the name of health.
Sign up for our newsletters to have the latest stories delivered straight to your inbox every week.