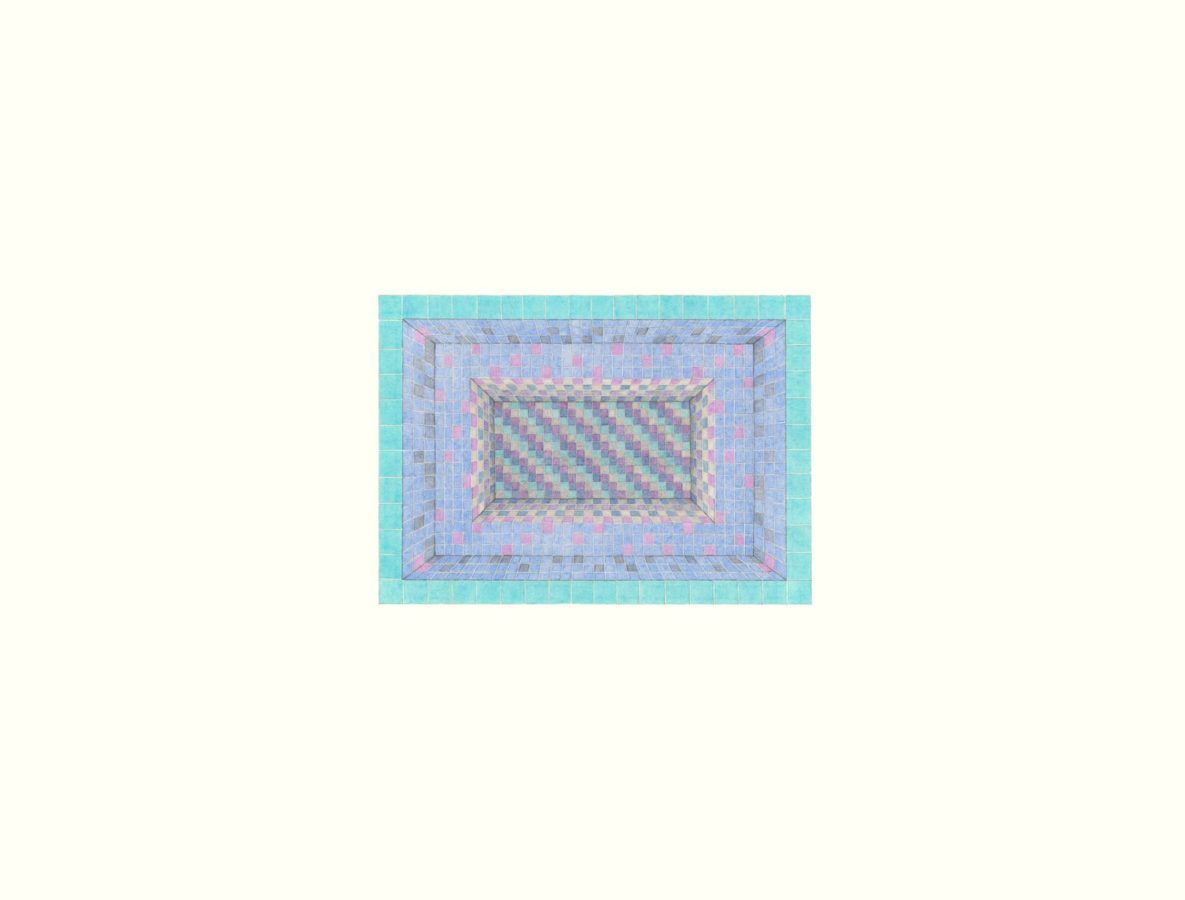 A finalist for the 2022 Sovereign Asian Art Prize, Chan Wai Lap is making waves as an up-and-coming artist in the Hong Kong industry. Lifestyle Asia talks to Chan about his swimming pool series and his greater aspirations for his work.

I meet Chan Wai Lap the day before Art Central’s opening, while he is in the midst of setting up his booth.

Honestly, I feel a little guilty. As if he isn’t already busy enough, he has to find time to entertain me too. With less than 24 hours until the big opening, I would be plenty worried if I were in his shoes.

Chan, though, shows no signs of distress. In fact, he is all smiles when we meet. His sunny disposition is contagious and all at once, I feel myself relaxing in his presence.

If you’re even just slightly familiar with the Hong Kong art scene, or if you attended Art Central last year, you’ll have heard of Chan. With nearly 10 years of experience under his belt — his first exhibition was with Osage Gallery back in 2013 — the Hong Kong-born and raised artist made headlines at Art Central 2021 for his locker room installation, “The Lonesome Changing Room”. Aside from his one-off, bewildering installation, he is known for his works documenting public swimming pools and addressing the school system in Hong Kong.

“Growing up, I never really thought I would become an artist,” says Chan. “I studied design in school and went down that path because it seemed like I could earn a living. But just three months into my first full-time job as a graphic designer, I couldn’t take it. I decided to quit and give myself some time to find creative freedom as an artist.”

It all sounded good in theory, except “finding creative freedom” didn’t come easy. With nothing to his name, Chan’s art was left to gather dust in the corner of his studio.

“It was hard in the beginning,” he admits. “And it took a lot of trial and error, but I discovered that if I gave my art a use by turning it into a product and selling it at arts and crafts markets, then I could somehow make a living.”

Talent? Check. Perseverance? Check. All that was left was a little bit of luck. And luck did come, eventually. With a substantial body of work under his belt and a reputation as a crafter at the weekend markets, Chan was soon approached by collectors and gallerists who offered to show his art in formal exhibition spaces.

“It was then I found out that my art had value, even if it wasn’t attached to a specific ‘use’,” says Chan.

In his practice, Chan has played around with a mix of dry and wet media, as well as found objects such as toys and stationery. But none of his pieces is as recognisable as his swimming pool series, usually pencilled in tile by tile on paper.

“I started documenting public swimming pools in 2016. I remember I was stuck in a rut. I would struggle for hours on end in my studio, trying to force something out. But art doesn’t work that way, and I knew something had to change.”

Chan decided to do something he had never done before — he chose to learn how to swim. He thought about taking lessons, but at 28 years of age, he felt embarrassed to be seen in public in a class “like a toddler”.

“So, I decided to learn through Youtube,” he laughs. “And funnily enough, I succeeded. I learned how to swim on my own.”

For Chan, who is now 34, learning how to swim mirrors his journey as an artist. He began with no experience and slowly taught himself how to navigate the waters; as for art, he had no prior education or training and simply dove headfirst into the industry, following only his intuitions.

“Swimming gave me a routine. Every day, I’d escape the studio and swim for one or two hours in the morning. Then I’d have lunch and make art in the afternoon, fully refreshed.”

As someone who has always found inspiration from his own life experiences, Chan decided to pay homage — “give back”, sort of — to the swimming pool through his art. After brainstorming different ways he could portray the blue rectangle on paper, he settled on using colour pencils. He likened the act of sketching in each tile with small, frequent strokes, to swimming, a sport of repetitive muscle movements. Filling in each grid meticulously and watching the pencil become shorter as he worked gave him a sense of satisfaction that he could not describe.

In a collection named “You come to me on a summer breeze”, which has a 2019 and 2021 edition, Chan documents the various shapes and forms of the public swimming pools around the world. The project took him from New York, to London, to Berlin and more. He’d stay for weeks in one city, apply to use its public facilities, and pick a pool to swim in and study.

“Swimming pools can tell you so much about the history and the culture of a place,” the artist shares. “In New York, for example, public pools come in all shapes and sizes. Some are nestled in the middle of a high rise; others, like the one in Central Park, are round in shape. Meanwhile, in Istanbul, only one sex can use the pool at a time, following a daily schedule with specific times set aside for men and women.”

In Hong Kong, too, swimming pools act as an indicator of the culture of their neighbourhood. Kwun Tong’s pool is perpetually full of families, pointing to a need in the community for a public play space like it; Morrison Hill’s pool is occupied by professional swimmers who are training for their next race.

“If you frequent one particular pool as I do, you’ll start to notice the same people there again and again. We don’t know anything about each other, but there’s an unspoken connection between us, almost like a sense of community.”

In fact, it is this unspoken connection that Chan missed most in the past two years. With the spread of Covid-19, public swimming pools in Hong Kong had to shutter, leaving the artist without direction — but only temporarily. Deciding to change things up, he took up hiking and jogging on Bowen Road.

“Interestingly, I encountered many swimming pools on my hikes but from a different perspective. Peering below Bowen Road, I spotted many private pools in the affluent area. I was an outsider looking in; I wanted to jump in and swim, but I couldn’t,” says the artist, who notes that swimming pools are also representative of class.

In mid-May, public swimming pools were finally given the green light to reopen. To commemorate the occasion, Chan picked a sunny day to return to his regular pool. Diving in, he felt a sense of familiarity and estrangement all at once — but any doubt that crept in was washed away as soon as he reunited with the waters. The best part, he says, was seeing and recognising the other swimmers who, just like him, were easing back into their regular schedule.

Showing at Art Central marks an important milestone in Chan’s career. The fair not only helps him reach a wider audience, but also enables him to experiment with new ways to tell his story. Ultimately, he hopes his art can help take visitors away from their daily problems, give them a different perspective and even open up a back-and-forth dialogue.

Art Central won’t be back for another year, but you can still see more of Chan’s work at SC Gallery’s “The Sunshine is still there!” exhibition, running until 25 June. Stay up to date with the artist by visiting his website or following him on Instagram.