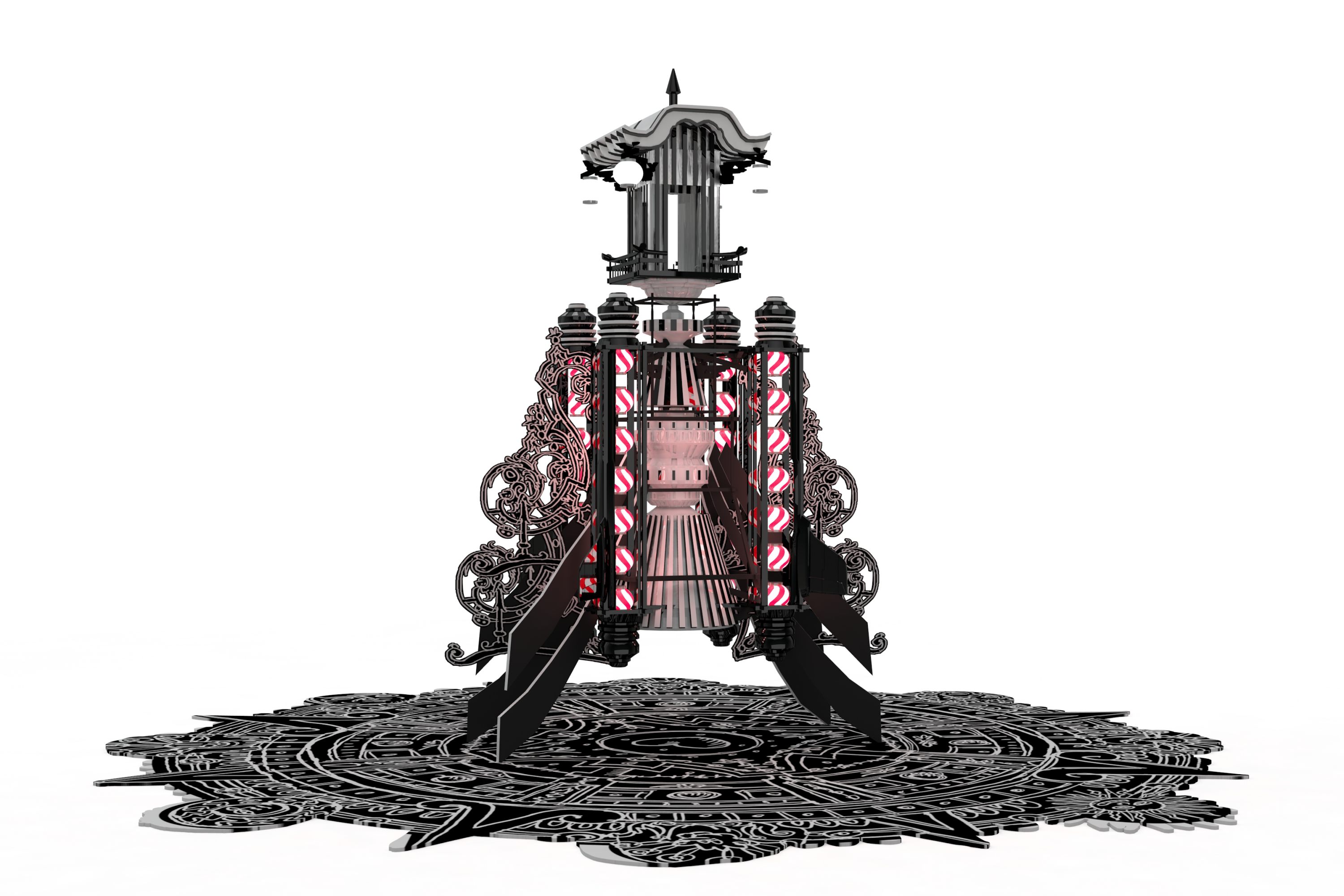 While Christmas trees, starry lights and winter wonderlands typically adorn public spaces across Hong Kong at this time of year, you won’t find any of the above decorating K11’s main atrium. Instead, oddly enough, you’ll find a 15-foot rocket ship commanding attention in the centre of the art mall.

Created by the Tokyo-based French artist Nicolas Buffe, the sculpture is a unique piece that combines traditional Japanese mortise-and-tenon carpentry, as well as centuries-old lantern-making craftsmanship in a whimsical, modern prop that plays a pivotal part in a brand new Christmas narrative told by the artist. The story extends downstairs in the dedicated gallery chi art space, where the exhibition continues in an enchanting fantasy world, telling a fairy tale starring 13 western zodiac signs through paintings, gates, and a planetarium where visitors can lie down on giant cushions to discover each constellation. An element of augmented reality is also incorporated to allow guests (particularly young kids) to interact with and learn from the pieces. The exhibition, ‘The Universe in Me: A Christmas Voyage’ runs through to 1 January 2018. During the launch, we spoke with the artist about his playful take on the holidays sans the standard pine tree and tinsel.

This installation is not your typical Christmas-themed art piece, what inspired you to create your rocket lantern instead?

In fact, the involvement of astronomy during this holiday time is much older than Christmas: In ancient times, it was in fact a festival about the rebirth of the sun, or the winter solstice. In ancient Rome or Greece, they used to celebrate this rebirth of the sun, and this was replaced later by Christmas after the Roman empire was taken over by Christians. We thought, why not have a new way of treating ‘Christmas,’ and create a story involving Capricorn, the sign for December (29 November–17 December)? As this exhibition is in an international setting — I myself am a French artist living in Japan but exhibiting in Hong Kong, a city which has a rich cultural way of seeing things — I thought that doing it this way would be a more universal approach.

Have you always been fascinated with Japanese sculpture and lantern techniques? Why did you decide to build your rocket lantern sculpture in this way?

Originally I was much more influenced by Japanese pop culture: anime, manga, tokusetsu (live action CGI shows). I watched tons of anime as a kid. It was very popular in France. I didn’t even know at the time it was Japanese, it was just cool. Later, I delved more deeply into it, and began to seek out these elements in my work. When I moved to Japan, I discovered more about the traditional ‘face’ of Japan, from building techniques to craftsmanship and mastery. For the rocket, we worked with wood specialists to create mortise-and-tenon joints with Japanese tilia and larch wood. The lantern element was made by hand by craftsmen in Tokyo. But in my work I also use traditional French techniques. At the moment I am working on a collaboration with Sèvres, the porcelain manufacturers, to showcase 300 years of history at the Suntory Museum in Tokyo. It was also interesting to mix in modern techniques such as 3D printing, something from say 10 years ago, with techniques that are over 500 years old.

Your works are also based on a narrative relating to 13 zodiac signs and Japanese myths. Can you take us through the story, and what inspired it?

I wanted to do a fairy tale to fit in with the spirit of Christmas. At the beginning of the story, if we use a special AR mobile app, we can ‘help’ Urania to spot the 12 signs of the zodiac through each system of constellations. She will have trouble locating Capricorn, so she has to travel into space to see what’s going on. When she arrives into the planetarium (which is the K11 gallery space folded into the story) she realises that it was Ophiuchus, the 13th sign who was jealous of being relegated, and who has captured Capricorn. At the end, Urania manages to calm down Ophiuchus and frees Capricorn, restoring balance and saving Christmas. It’s a very simple story.

There are some Japanese elements, but most of the narrative comes from western mythology. For instance, the heroine of the story is Urania, the muse of astronomy and astrology. She’s in charge of watching over the stars, and making sure that balance is well-kept in the cosmos. In the original Greek allegory there were nine muses, all daughters of Zeus. They represent each of the arts.

The Japanese influences are in the design of the rocket, and in the drawings, of Urania, for instance. She’s traveling into space, and in antiquity this was just an imagined outcome, but now we know we can do it — I thought it was interesting to give her a rocket to do it, as well as to play with different culture and periods in time, from very old Japanese techniques to Star Wars-style spaceships.

Why did you decide to include the 13th sign, Ophiuchus?

I discovered the 13th zodiac sign only when I started building this narrative. I realised that Ophiuchus is a constellation that can be formally counted as a zodiac sign. Every constellation is determined by the position of the sun. According to this measurement, certain signs will only last for one week — like Scorpio — while others will last much longer — such as Virgo, which would last for more than one month. Ophiuchus would then take place between Sagittarius and Scorpio (29 November–17 December).

What fascinates you about the zodiac for you to include it in your art? Do you consider it pseudoscience as many might when they think of horoscopes?

I have always been interested in iconography and history of art, and the art of memory, especially the hidden meanings in paintings in Renaissance art. I really appreciate this kind of image system, and how they were based on cognitive techniques that were used in antiquity that still influence our way of making images — but that we don’t really formally use now.

In fact, the zodiac is related to putting multiple meanings into a single image. I have a whole set of information about each sign. For every sign there is a stone, a plant, an animal that is always in relation to them. For example, for Leo, which is my sign, the colour is yellow-orange. The element is fire, there are deities linked to Leo for instance Osiris, Apollo, Helios — they’re always linked to the sun. July is the month of Leo. The olive tree is it’s plant. Its stones are ruby, amber and topaz. These symbols were decided a long time ago, even older than the Roman and Greek civilisations, I think it dates back to Mesopotamia. It’s very very old knowledge, much older than Christianity.

I enjoy playing with this artistic language. For example, with the way I re-created Urania as a modern character, I used influences from Audrey Hepburn, as well as from manga. With some drawings, they were a little more cartoony, but there are also precious stones, plants and symbols related to each zodiac. When I use these symbols in my art, I try to incorporate modern elements so that people in our time can understand.

Can you take me through the augmented reality portion of your piece? What will the viewer have to do and what can they see? What did you want to express for the audience?

The second part of the exhibition is the planetarium, in which a motion sensor can detect your head’s movement as you look up at the stars and learn about each zodiac sign. There’s another interactive aspect of the exhibition, which has taken on the style of a theatre set — starting from the MTR to the ‘Gate of Capricorn’ near the gallery entrance — I like that an exhibition is not just drawings on the wall, but it’s an actual environment. I’m happy that I got to achieve a multimedia exhibition. I designed opera sets in France, I also work with department stores and fashion brands. I don’t really separate between genres in art and design.

What do you look forward to this holiday season, and for the new year?

I would like the audience to enjoy an adventure with their families. For children and adults, this exhibition may be about the zodiac, but it’s also about the cosmos. And the deeper meaning of the exhibition is to be aware of the cosmos and the universe. If people become inspired to watch the stars after the exhibition, that would be a nice thing to feel rooted to nature. What I like about this being in Hong Kong is the rare opportunity to watch the stars — knowing that there are so few natural places to see the stars outdoors — and by doing this, maybe we can get closer to each other. It relates to the spirit of gathering during the holiday season.

Art Sculpture Installation christmas in hong kong K11 Art Foundation augmented reality Christmas 2017 Nicolas Buffe Christmas story
Evelyn Lok
Managing Editor
When not trying out the latest beauty and wellness trends, Evelyn is likely enjoying a perfectly balanced negroni or exploring some of Hong Kong's best new places to eat and drink. At Lifestyle Asia she covers everything from the biggest events in town to interviews with Hong Kong specialists, with topics spanning art, food and drink, health, tech, and travel.
Beauty Wellness Events Art Drinks
Sign up for our newsletters to have the latest stories delivered straight to your inbox every week.