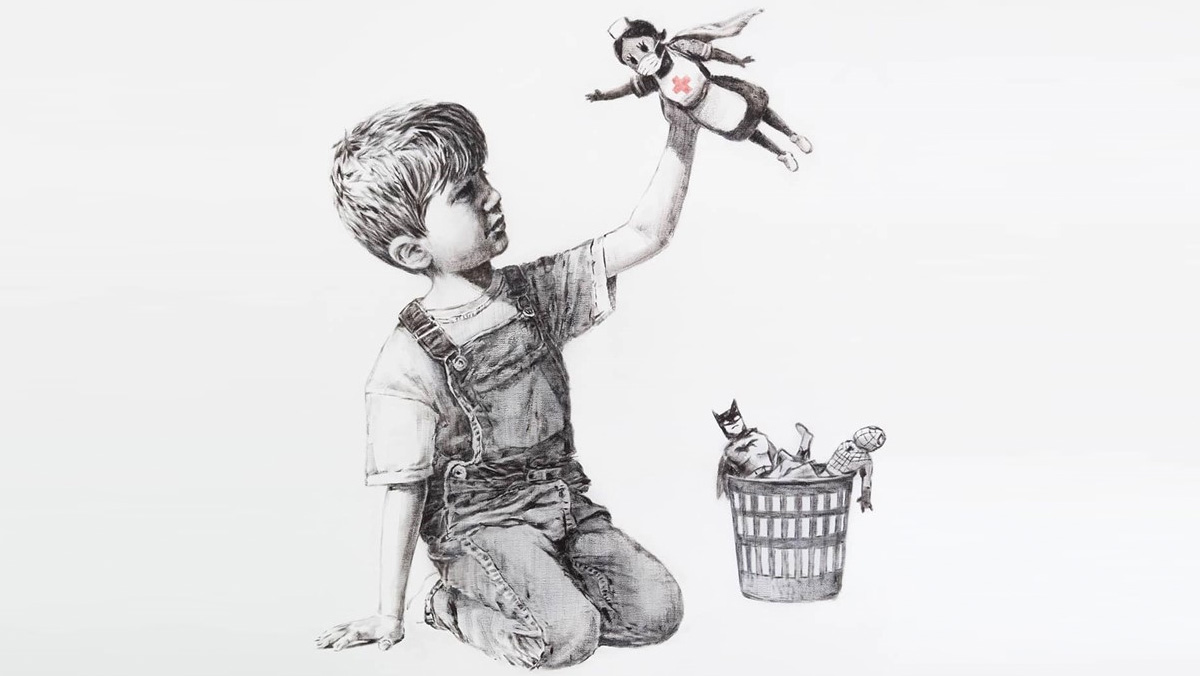 A new artwork by Banksy in honour of Britain’s health service has gone on display in a hospital, paying tribute to medics battling the coronavirus pandemic in the second hardest-hit country.

The artwork, entitled Game Changer, depicts a young boy playing with a figurine of a nurse in a superhero cape and a face mask, and near him lies a trashcan with discarded Batman and Spiderman action figures. The sole splash of colour in the monochrome art piece is the red cross on the nurse’s uniform.

Currently hung on a corridor wall at a hospital in Southhampton General Hospital in southern England, the one-square-metre tableau will be put on public display when lockdown measures are lifted, according to a spokeswoman for Banksy. It will then be auctioned off to raise money for charities connected to the country’s National Health Service (NHS).

The Game Changer is actually not the first work by Banksy influenced by the current pandemic. Last month, the artist posted a picture of a bathroom overrun with his trademark stencilled rats, along with a comment: “My wife hates it when I work from home.”

While no one knows for certain if it’s the artist’s own doing, Banksy’s previous work, the Girl with a Pierced Eardrum mural, has been found updated with a blue surgical mask.

Britain’s official CoViD-19 death toll this week overtook Italy’s, with more than 32,000 fatalities — second only in severity to the United States. While the UK government has been continuously slammed for the lack of personal protective gear provided to healthcare workers and insufficient test kits for the public, the Brits have all expressed an outpouring amount of gratitude towards the NHS. That includes standing by their windows and front doors every Thursday evening to clap and cheer for NHS workers, who are the real-life superheroes in the world.