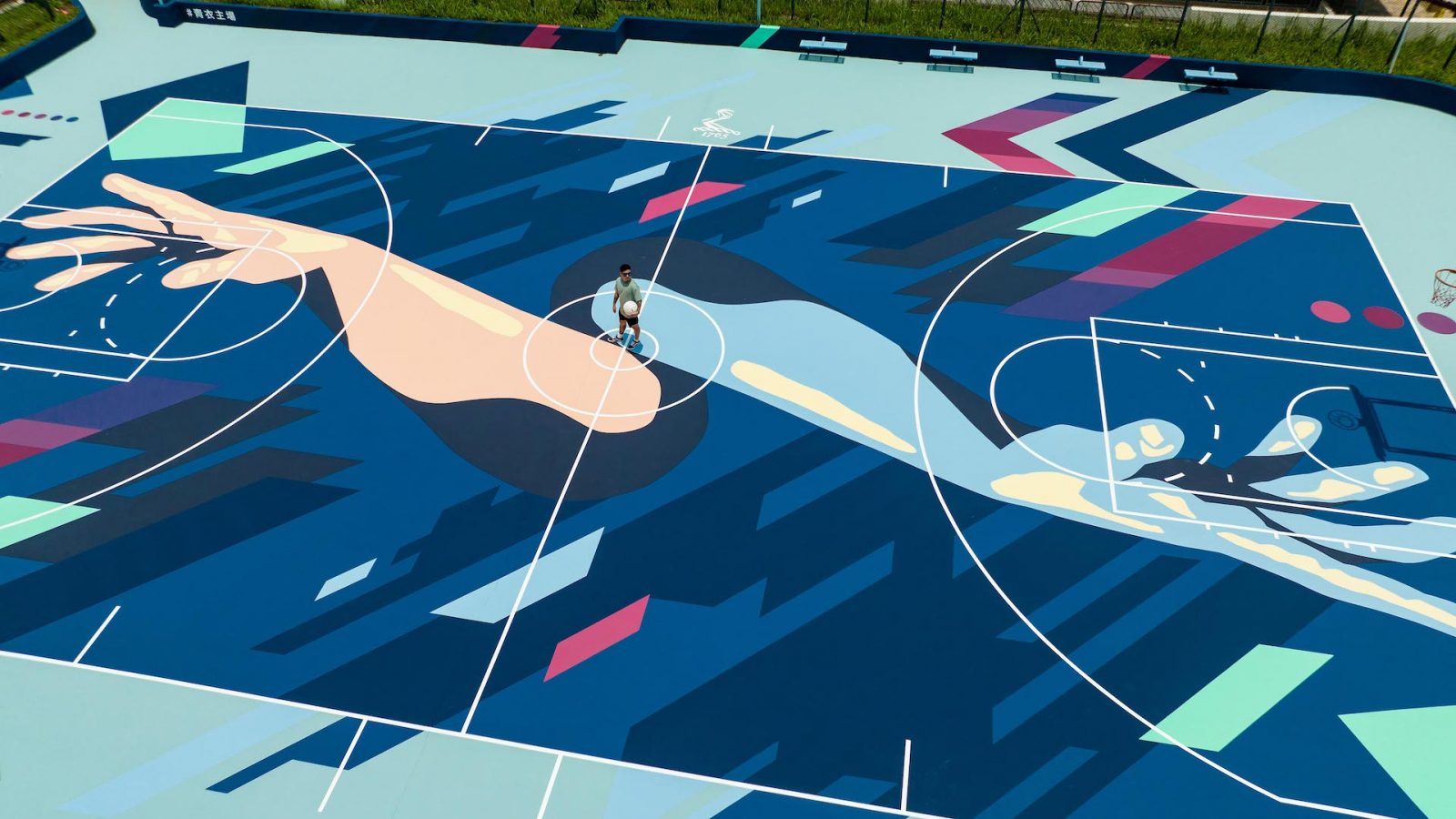 Earlier this summer, Hong Kong was graced with a brand new rooftop basketball court, “Hennessy In the Paint”. If you’ve visited, then great — but if not, don’t worry. The collaborative project between Hennessy, public estate company People’s Place and Hong Kong art group HKWalls is now welcoming the public daily from 9am to 9pm atop the Tsing Yi Shopping Centre.

At the heart of the project is Japanese street artist TAXA, whose credentials include large, sometimes interactive murals for popular restaurants such as Musubi Hiro and Xi Xup; companies both large and small like DBS Bank, Warner Music and GO24; and music festivals, namely Cyberpunk Festival and Shi Fu Miz — and oh, this is just his portfolio within Hong Kong.

As a rather private person, even professionally, TAXA tends to stick to himself. I’ve personally watched the artist for a long while, enquiring multiple times for an interview, but always to no avail. This time, though — perhaps because this particular project is so special — TAXA is more than happy to tell us all about his career and experience working with Hennessy, People’s Place and HKWalls. So here goes.

Born and raised in Japan, TAXA spent much of his youth travelling around, living in Canada, New Zealand and South Africa. In the mid-2020s, he settled in Hong Kong — the fifth city that he has called home — and has been based here since.

“Being exposed to different cultural experiences during my travels has no doubt influenced my art and lifestyle,” shares the artist. “In particular, I draw inspiration from snowboarding, street art and tattoo culture.”

But even as a child, before he began exploring different countries, TAXA found himself drawn to Japanese art, both traditional and contemporary styles. He was always itching with creativity and the urge to make something.

“I started creating spontaneously when I was little. I don’t remember the details as it was long ago, but I was naturally interested in creating something — anything — especially drawings and paintings.”

One of the Japanese sub-cultures that had a big impact on his art style as he got older was irezumi, which is the literal translation of “tattoo”. Although the term is sometimes used to describe a number of tattoo genres originating from Japan, in English it refers to a distinctively traditional Japanese tattoo style that incorporates large-scale motifs. These motifs are usually based on Japanese mythology, well-known fables and religious characters, as well as scenes from nature such as the wind and rain — all elements that you’ll find depicted in TAXA’s work today.

The artist, though, refuses to give his artwork a label. “Basically, I create what I like to create. That’s fundamental,” he says, when asked to describe his style. “You may draw similarities between my pieces, or sometimes they’ll be wildly different. This is because I always create depending on my emotions at the time.”

“Hennessy In the Paint”

TAXA’s latest project is a revitalised rooftop basketball court in Tsing Yi. Titled “Hennessy In the Paint”, the court is part of Hennessy’s global artistic initiative to reinvigorate the community with quality street art. Hong Kong is the first city in Asia where the brand has launched this campaign. In addition to enhancing the user experience, it is hoped that the new basketball court will serve as a gathering spot for people.

TAXA’s vision is to bring the theme of collaboration to light. His graffiti art, which spans the length of the court, features local elements such as the skyline, natural hills and nightlife of Hong Kong. A pair of arms occupies most of the design, signifying togetherness and healthy competition.

“I incorporated Hong Kong mountains and skylines as these are iconic elements to me. I got this opportunity to design a basketball court in Hong Kong, so I wanted to create something that Hong Kong people are proud of.”

Dominated by various shades of blue, the bold colours of the court demand attention but also harmonise with the surroundings.

“I love using blue. It’s my go-to colour, which also makes sense in this case as the vibrant shades help to hide dirt and footprints that will inevitably appear. On the technical side, I chose white lines for the court as they need to stand out for players.”

For TAXA and HKWalls, which helped organise the project with Hennessy and People’s Place, basketball fosters teamwork and puts an emphasis on interaction and communication. This has parallels in street art and its culture, where friendships are built through being a part of the community.

“The court is built for the community to enjoy, without prejudice, which resonates with what street art is about,” says a spokesperson from HKWalls.

“I did my best for my part and am very happy with the result,” adds TAXA. “Now, it’s time for the people to enjoy the court and hopefully they feel proud of what it represents, too.”

The Digital Art Fair Xperience 2022 comes to Hong Kong this October: What we know so far