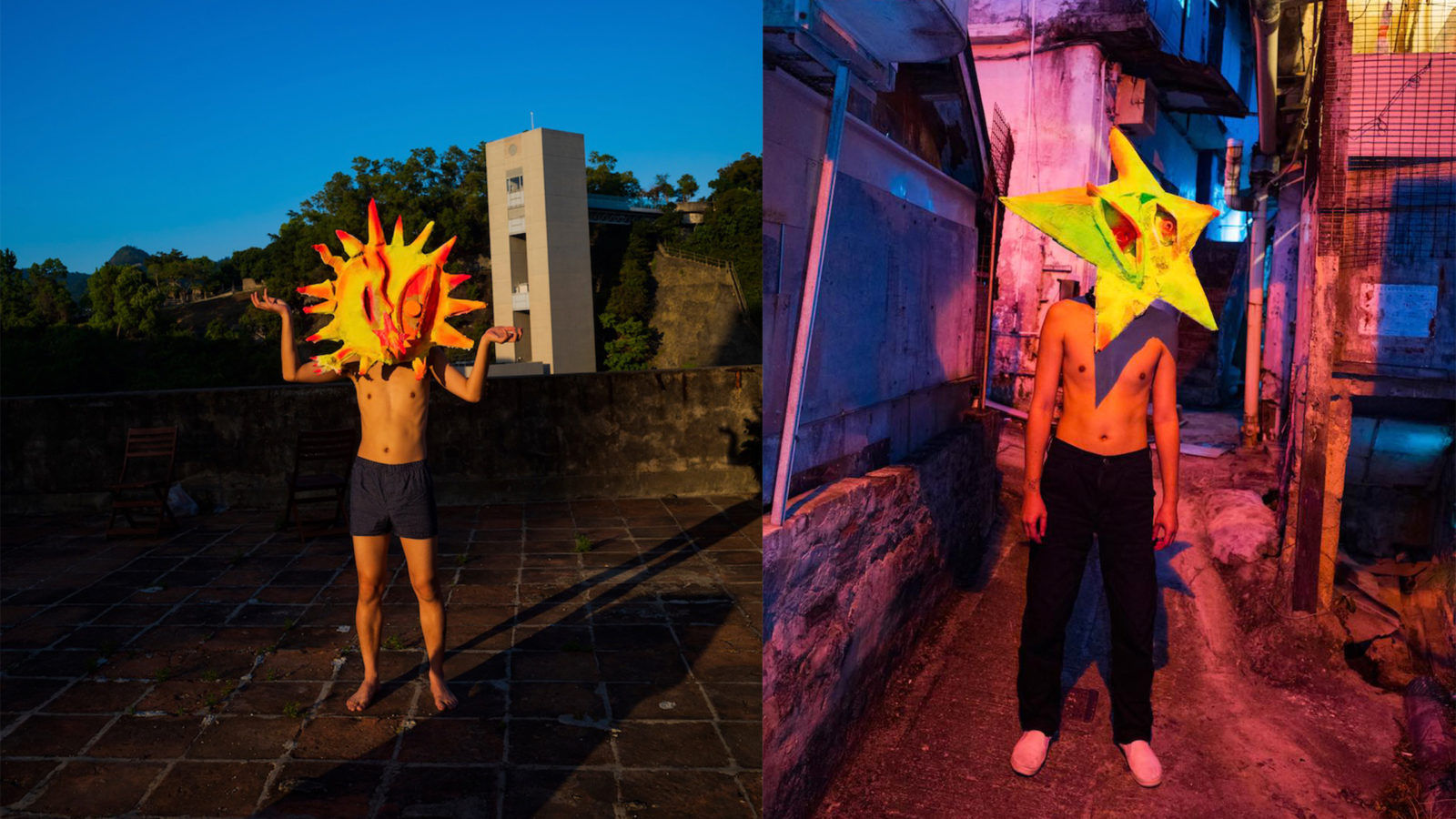 Presented by Square Street Gallery, Lousy is one of Hong Kong’s own taking part in this year’s Art Central. Lifestyle Asia talks to the artist about how he got his start in the art world, the inspiration behind his works and what he hopes the audience can gain from his art.

Not gonna lie, on the way to meet Lousy, I was flustered. Flustered because one, his studio was not easy to find and I was already late for our meeting; and two, his anonymity was a little intimidating, and I wasn’t sure what to expect.

I needn’t worry. He turned out to be one of the coolest people I’ve ever met.

During our one-hour visit, I discovered a few things about the Hong Kong-born and raised artist. He was a lover of analogies. He used art as a form of communication. And he was currently doing a residency, with his work culminating in a solo show that would happen the coming week.

“An enigma,” answered Lousy, when I asked him to introduce himself. Then: “I’m just a Hong Kong dude from Kowloon.”

He gave me a quick rundown of his career so far. He’d been painting almost his whole life. One of his earliest inspirations was anime and manga. He worked at a creative agency for ten years, with a short stint in Shanghai. Eventually, he started doing some art on the streets and moved on to more commercial projects.

Even for the uninitiated, Lousy’s art is easily recognisable. His distinctive style — wavy, rhythmic line art, often paired with a neon palette — came about a few years ago. The artist himself described it best: simple and stripped back, like the human spine, like bare bones.

“If I had to choose a favourite piece of mine, it would be the Kissface, I suppose,” he said, when prompted.

“But what I love most about it is that it’s free on the streets for everyone.”

For the artist, it’s less about the style of art but more about the mentality. There are no direct influences on his creations. They are, instead, an outcome of a straightforward, unembellished mindset. “Like expressing something complicated in a simple manner. Like explaining physics to a kid, for example.”

Ultimately, Lousy’s art is about distilling human emotions and thoughts into a physical form, be it a painting, a sculpture or an installation. And they are about good things. “I get that some artists want to address their personal struggles or societal issues in their art, I really do,” he said. “But that’s not for me. There’s enough bad news in the world, you know? Why emphasise it more? That’s why my art is about things like love and sex. Good things.”

As of May, Lousy is wrapping up his three-month studio residency with Square Street Gallery and EJAR|Ragora. The residency, which he described as an “intense season of making stuff”, is an interruption to his standard artistic practice. Situated in the middle of one of Hong Kong Island’s last villages, the studio space where he has brought to life his latest body of works is raw, rough and in contrast with the city’s polished skyscrapers.

During my visit, I was treated to a preview of his show “LOUSY PEOPLE”. Pieces made of fabrics depicting gods, monsters and human bodies hung from the walls, reminiscent of ancient cave paintings. A sculpture made of faux pointy leaves, tied together with twine and toilet rolls, was lit up by blue lighting to cast an intimidating set of shadows on the peeling walls of the gallery space. A set of paper-mache masks, twisted and contorted to resemble faces, hands and eyes, sat on the floor, passing time for the glue to set. It was all very alive, very jubilant and a little out-of-this-world — in a good way.

In addition to his own solo exhibition, Lousy is also joining Art Central this year. Working with Square Street Gallery, this is not the independent artist’s first time showing at the art fair; last year, he presented two murals.

“For the upcoming fair, actually, I’m not sure what I’ll show yet,” the artist said. “I’m not a last minute person but I might be a bit last minute with this, with three weeks to Art Central.”

He gestured towards a painting-in-progress of a three-legged dog with a neon pink and green background. “Maybe I’ll exhibit this,” he said. “It’ll be the first in a series. It’s a dog I passed by on Star Street. Maybe I’ll go on to make a whole ‘zine about the dog and his friends.”

He continued enthusiastically, telling me all about the dog and how happy it looked the day he saw it, despite it missing a limb. It was too memorable not to record down.

“His name is Stardog. Y’know, since I saw him on Star Street.”

That’s how Lousy’s artwork usually comes about, I later discovered. There is no particular creative process. Sometimes it’s just down to an interesting object, living or nonliving, that he sees. Sometimes it’s imaginary things from his mind. Sometimes he finds inspiration from the depths of his memories.

“My creative process differs every time and comes in waves. It’s like making a t-shirt versus a dress or a gown,” he explained. “There are times I just want to make a t-shirt. I don’t always set out to make a couture collection.”

In the end, art is all about communication. At least, that’s what the artist answered when I questioned him about the meaning behind his work.

“I don’t want there to be a specific reaction from my audience,” he said. “If I wanted a direct interpretation of my work, I’d be a writer, not an artist. My work is whatever you want it to be.”

About his change from starting as a street artist to shifting to work on more commercial projects, he maintained that the two can exist together. Unlike many artists who turn their noses up at commercial work, Lousy is not opposed to it, perhaps “because of my agency background”.

For him, collaborations with big brands are simply another way of getting his work out. His partnership with Casetify, for example, meant that more people who are not into “going to the art galleries” are able to discover his work.

When it comes to street art versus gallery art, Lousy shared that there was a time and place for both. In a way, he still preferred graffiti art on the streets, where the art is meant for the everyday person. This is compared to exclusive art galleries or fairs, which can “sometimes be a little classist”. Of course, that’s not to say he is against these institutions. In fact, during our meeting, he kept emphasising how grateful he was to be given a chance to present at prestigious art fairs like Art Central, calling the opportunity a milestone in his career.

So, what’s coming up for Lousy after his residency concludes?

“I’m going to step up my game, keep moving forward at my own pace, do more shows locally and hopefully overseas now that international travel is possible again.”

This means moving forward with more personal and commercial art and continuing to find a balance between the two. Having too much of one or the other, he stressed again, would make things stagnant.

As for his final goal, his end game? The artist paused at my question, apparently deep in thought.

“I’d like to collaborate with Uniqlo. How awesome would it be to have an international drop with the brand? But that’ll only be the end of Phase 1 of my career. Then we’ll begin a new phase.”

Hong Kong Art Central 2022 lousy LOUSY PEOPLE Square Street Gallery
You might also like ...
What's On
Art Central returns to Hong Kong this May: Here’s everything you need to know
Culture
Hong Kong urban artist Taxa teams up with Johnnie Walker Blue Label and Riedel on limited-edition gift box
Culture
8 must-see art exhibitions in Hong Kong this May
Culture
Pushing through the fifth wave: How 3 Hong Kong artists have changed with the pandemic
Charmaine Ng
Editor
Charmaine enjoys eating steamed broccoli and knocking back cups of spearmint tea, all in the name of health.
Sign up for our newsletters to have the latest stories delivered straight to your inbox every week.