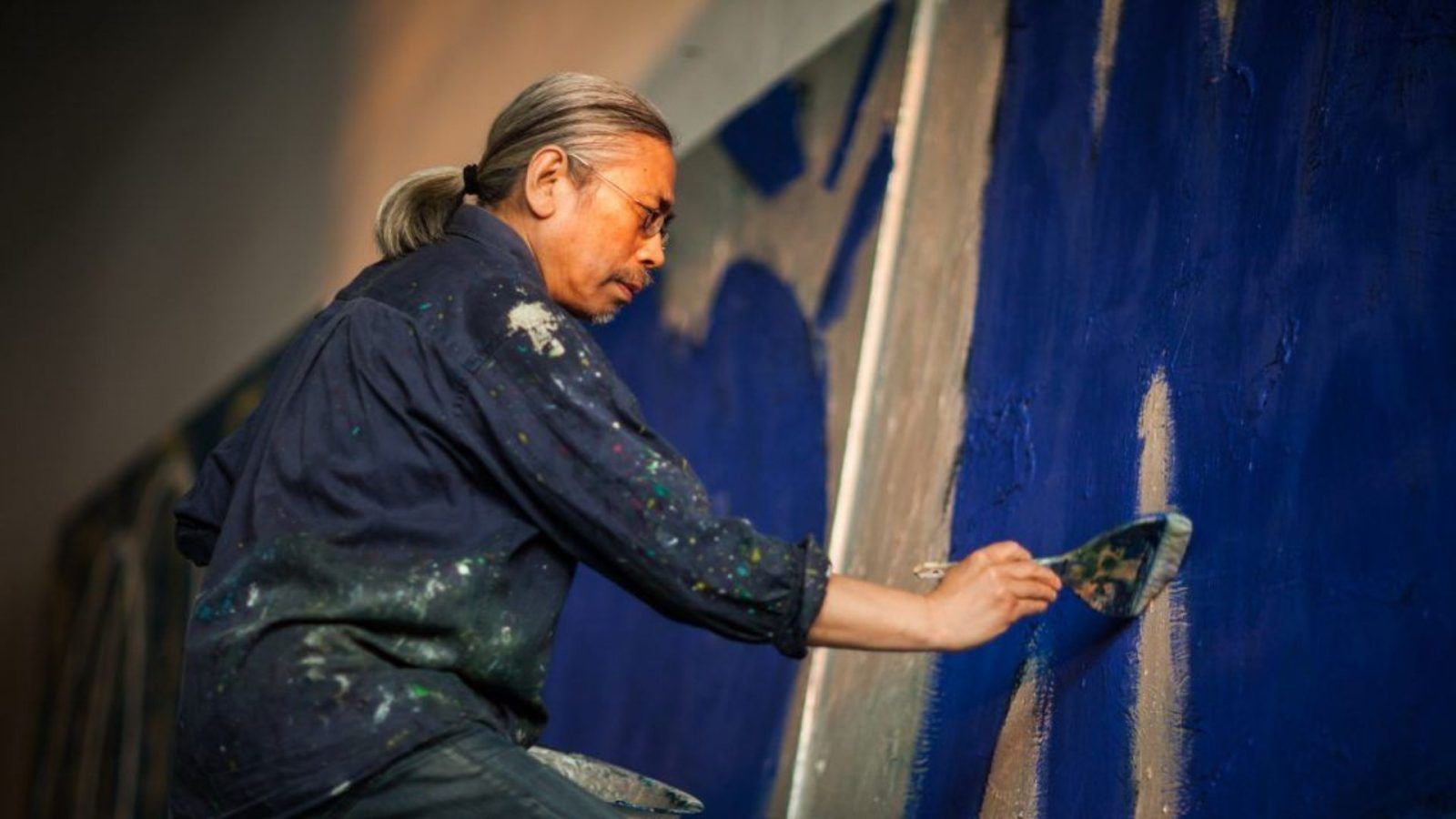 An “unofficial painter” who developed his skills independent of official Chinese art practices during the Cultural Revolution, Beijing-based artist Ma Kelu is known for his innovative artistic career and abstractionist style. His latest solo exhibition, Wilderness, is currently on view at Pearl Lam Galleries in Hong Kong. As the show opens, Lifestyle Asia talks to Ma about his early influences, his time living in the US and his continued persistence in only using paint as a medium.

Ma Kelu is no newbie to the art scene. In fact, he’s somewhat of a veteran, having been active since the 1970s. For the uninitiated, the Shanghai-born artist first found fame as one of the founding members of the avant-garde artist collective No Name Group, and has continued to make a name for himself since. Today, Ma is based in Beijing and is represented by a number of galleries around China and Hong Kong, including Platform China Contemporary Art Institute, Beijing; LinBART Gallery, Shanghai; and Pearl Lam Galleries, Hong Kong.

I meet Ma via Zoom in late June as his latest Hong Kong solo show, Wilderness, opens. An enthusiastic man with shoulder-length hair and frameless glasses, he is more than happy to indulge me, running me through his background and sharing with me his greater aspirations.

He fiddles around as he talks, as if looking for something, then shows me a pair of Zhang Daqian’s calligraphic couplets, followed by some steles and stone sculptures from the Beilin district in Xi’an. “I got these from my father 40 years ago,” he says proudly.

While he doesn’t remember much more about his younger days, Ma recalls using chalk to draw all over his neighbour’s walls and doors in Shanghai’s alleyways when he was two or three. His mother watched him but never stopped him; she simply cleaned up the mess he made without a sound. That was probably his first encounter with ‘art’.

As he got older, his parents remained supportive of his artistic endeavours, and even encouraged them on occasion.

“My dad supported my studies. He coaxed me and my brother to practise calligraphy and read more Tang poetry or ancient literature. We used to study Russian, British or French literature. Looking back now, these things went on to influence my art practice.”

The 1970s was when Ma first rose to fame as a member of the No Name Group. Made up of a small circle of artist friends, each with different goals and painting styles, the group held its first underground art exhibition in Zhang Wei’s home in 1974, followed by its first public exhibition in 1979.

“The people outside our little art group called us ‘Yuyuantan Lake School of Painting’ because there were several spots and places we often went to paint in Beijing, like Yuyuantan Lake and Fragrant Hills. Sometimes we would go to the Forbidden City.”

During the 1970s, members of the No Name Group found themselves in discussion about Chinese ink paintings — “especially the masters from early times like the Song dynasty, the Yuan dynasty or even from the last hundred years, artists like Huang Binhong” — frequently. Studying these paintings, Ma compared them to Cezanne, Van Gogh or Pissarro from the west.

“They all achieved similar results with their works and had a very high level of understanding of technical painting,” he summarises.

Those initial years were important for the Chinese artist as they provided him with a solid base for his creative practice. He not only learned a lot about the skills of painting, but he began to understand modernism through nature, too.

“I practised basic painting skills like changing the colour, light and the weight and control of my brush. All my works in the 1970s were done in nature or inspired by nature. These include “Lake in Gray”, “Autumn Breeze, Ripples and Willows”, as well as “Beihai Park”.”

As time slipped into the 1980s, though, the No Name Group separated and members went their own ways. “Since 1976, we were always together so it was only natural our styles became similar. I got tired of the sameness, so I left to carve out my own path.”

Ma travelled around Europe and eventually moved to the US, where he was awarded a residency at the reputable Skowhegan School of Painting and Sculpture in Maine. After that, he followed in the footsteps of many Chinese artists of his generation and settled in New York.

Exposed to a new, foreign art scene, he discovered a host of artists like Jasper Johns, de Kooning and Ad Reinhardt. He especially admired Ad Reinhardt’s philosophy and read through the abstract artist’s book, Art as Art, cover to cover multiple times.

“His philosophy always reminded me of the 1970s and the mid-1980s when I studied Huang Gongwang, Zhao Mengfu and Huang Binhong,” says Ma. He felt that Ad Reinhardt’s art-is-art concept resonated with the original intent of the No Name Group. Reaffirming himself as a modernist at heart today, he continues, “I don’t want my art to be used for something else, except for the art itself.”

Moving away from the depiction of realist scenes, it was in the late 1980s when the artist began his exploration of abstract paintings.

20 years after he arrived in the US, Ma returned to China to deal with an unfortunate family tragedy. There, he remained and continued his practice of abstract painting. By this time, in the 2000s, the artist’s work had evolved greatly. The impression of a landscape, for example, was reduced to a loose pattern of limited sets of colours. He did not want his work to draw from any references in reality — the pure existence of his oil paint on the canvas was the only reality he was interested in.

Still, even with the shift from figurative art to abstraction, Ma stayed loyal to the medium of painting. It was a form of media he found endless possibilities in.

“I’m not like the other artists who love experiencing different mediums, like conceptual sculptures or installations. My main interest is paintings, from oil paintings to ink paintings and watercolour paintings,” he says. “Over the decades, the way I paint has changed, so my motivation and inspiration for my paintings are also varied, whether it be a body of water and a forest, or a poem and a motto.”

On view at Ma’s latest solo exhibition at Pearl Lam Galleries, Hong Kong, are eight groups of paintings drawn from different periods, organised in chronological order. For example, a representational landscape painting is hung next to a non-figurative abstract painting, so viewers can see for themselves the evolution of the artist’s works through time.

Ma quickly runs me through the highlights currently displayed at the gallery. He mentions “Lake in Gray” (1974), which is depicted with subdued hues and without a trace of humans — a painting demonstrative of the activities of the No Name Group. Next, there is “Autumn Lotus Pond” (1983), a piece where Ma reduced the impression of a landscape by using only black and white hues. “Composition in Black No. 1” (1991) is a breakaway from the abstract expressionist movement and an exploration of the relevance of colour field painting.

More works are displayed in between, but Ma chooses to speak about his most recent series, “Ada”, which he began in 2016. Experimenting with an image transfer technique, the artist embraces the incidental nature of painting and continues his journey to achieve purity in the medium. The paintings in this collection are free from meaning, interpretation and responsibilities — they are simply infused with individualism.

“I will tell you what abstract art is in the wilderness. This painting of mine is about light, a kind of blinding light.”

Hong Kong Pearl Lam Galleries chinese artist Wilderness hong kong artist Ma Kelu
You might also like ...
Culture
10 must-see art exhibitions in Hong Kong this July
Culture
Installation artist Amber Ng on finding her style and exhibiting at Affordable Art Fair
Charmaine Ng
Editor
Charmaine enjoys eating steamed broccoli and knocking back cups of spearmint tea, all in the name of health. Covering art, beauty and music :)
Sign up for our newsletters to have the latest stories delivered straight to your inbox every week.