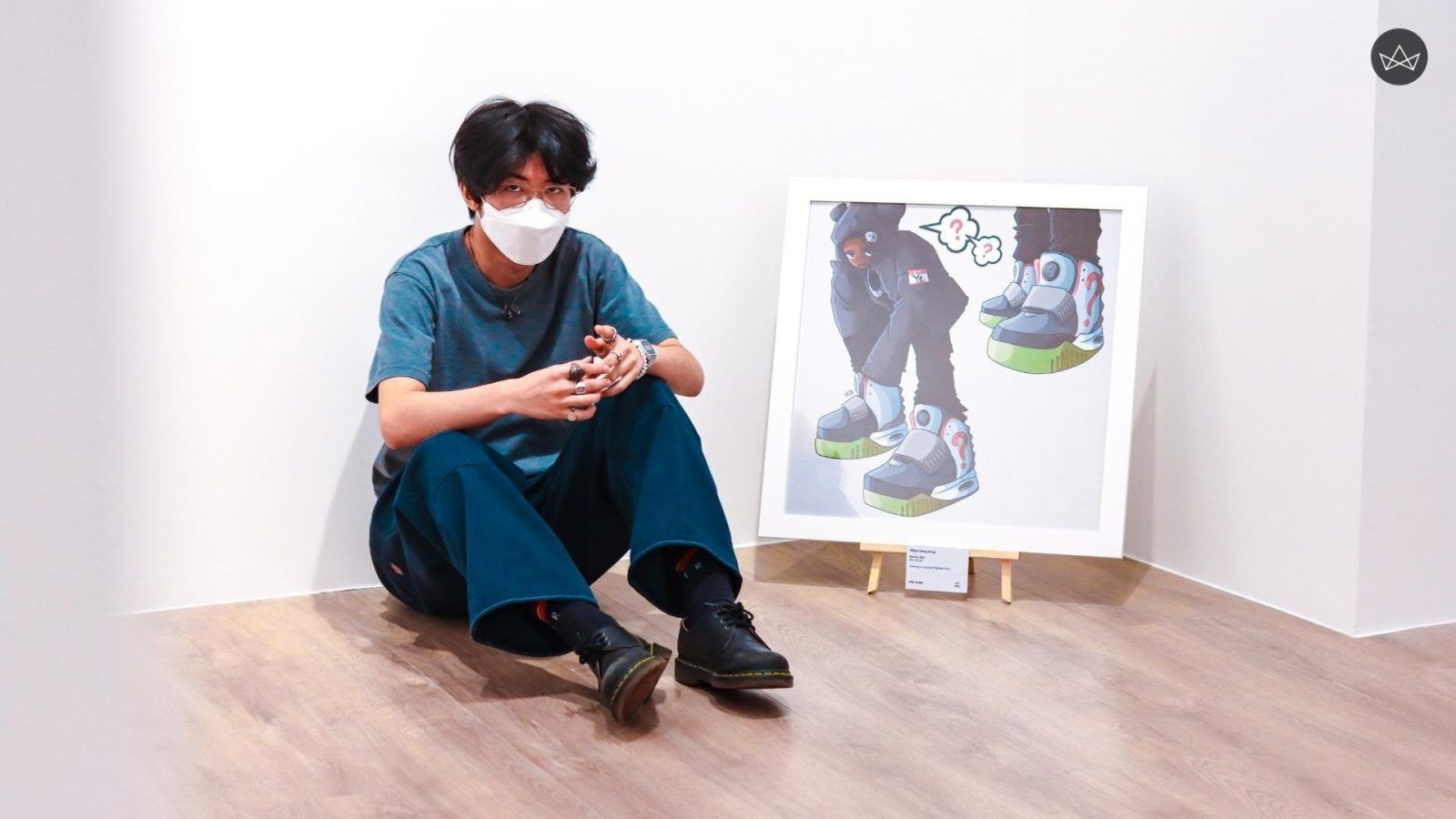 Hong Kong illustrator Andrew Mok, better known as Offgod, has earned the admiration of cultural icons from Pharrell Williams to Takashi Murakami — and he did it all before his 18th birthday. Fresh off creating the cover art for singer Bella Poarch’s latest single, he talks to Lifestyle Asia about seeing his work exhibited at SHOUT Gallery, Courage the Cowardly Dog’s influence and where he hopes his career will take him next.

Andrew Mok is one of the most wanted names in hip-hop.

No, he doesn’t rap. He doesn’t sing hooks. He doesn’t produce. He doesn’t write songs. He can’t even go to the bar. (Not legally, at least.) But this Hong Kong born-and-raised digital artist is nice with the stylus — so nice, in fact, that at only 17, the industry’s biggest names, from Pharrell Williams to Future, have already taken notice. Now signed to a US record label — with a gold plaque on his wall, a campaign with Adidas under his belt and a fashion line in the making — the creative wunderkind is living out a hip-hop dream beyond his wildest imagination.

You may also like…
Culture
10 Hong Kong hip-hop musicians to add to your playlist in 2022
Culture
Humour and hip-hop in Hong Kong: A retrospective

In the beginning, he just wanted a place to share his work. Instagram seemed like a good place to start (“It was the most trendy at the time”), but he kept his page private, posting sketches he drew of his favourite YouTubers for his close friends’ eyes only. Enjoying the experience but angling for a bigger audience, he took his profile public under the name Offgod; “off” in homage to the late Virgil Abloh’s industry-reshaping label, Off White; and “god” signifying a sort of boundless, creative freedom.

“Some YouTubers have big fan bases that appreciate fan art, so I just did that for fun. And then a few caught on and started sharing my work, which I thought was really cool,” he says.

With a little encouragement from friends and even his English teacher at Victoria Shanghai Academy, Offgod began to source muses beyond mere vloggers and streamers, putting his unique Japanese-anime-meets-western-cartoon illustration style (he cites Courage the Cowardly Dog and Kiki’s Delivery Service as influences) to work on the artists and musicians he admired, including Kanye West, Trippie Redd and Frank Ocean.

“When I first started drawing rappers, I was quite young. I was like, 13, 14,” reminisces the 17-year-old. “I’d slide in their DMs and be like, ‘Hey, look what I do,’ and 99% of the time they didn’t really answer back. So in the caption, I started telling people to tag them — it’s a much easier way for a person or an influencer on Instagram to see your work.”

It’s a remarkable touch of marketing savvy for someone who’s only a few years older than the Instagram app itself. It also paid off: Offgod was tapped to create the cover art for The Kid LAROI and the late Juice WRLD’s single, “Reminds Me of You“. But everything changed when his work caught the eye of another inspiration of his, the Japanese contemporary artist Takashi Murakami.

“He followed and DM’ed me like, ‘Your art is really cool!,” says Offgod, who, if acclaim from one of the world’s most celebrated artists wasn’t mind-blowing enough, couldn’t have done anything to prepare for what happened next: Murakami reposted Offgod’s work, his face, username and all, going so far as to credit the piece with refreshing his mind and forecasting a “huge future” ahead for the young artist.

“I switched my phone off because I didn’t think it was real,” he laughs. “I started refreshing the page. There’s no way. There’s no way — my phone’s tripping! It was unreal.”

But it was very much real, and Murakami’s followers found their eyes on a rising talent — one who was subsequently coming to realise there may be a future in this art thing after all.

“Then I saw Pharrell, one of the most influential people in music and art and design, liked the post, and I started to think I might be able to actually do art professionally instead of just, you know, a side thing. That was a big changing point in my life,” he says.

With his work suddenly exposed to a global audience, more and more of those artists he had once drawn and posted and tagged and messaged started to reply back, as well. When Chicago rapper Lil Bibby’s record label, Grade A Productions, hit him up about signing a deal, it meant Offgod would have to take the next great step in every artist’s journey: telling his parents.

“When I first started drawing, I didn’t [tell them]. Being an artist is a different approach to what people usually do in Hong Kong, where there’s this ideology of ‘get a good education, get a good job, work in an office’; it’s harder for someone that’s creative to branch out,” he says. “But when I got the message about getting signed to a label, I had to let them know. At first, they were pretty confused, like, ‘it’s on the internet, it’s nothing.'”

Once they realised that the offer was legit — as was the impact their son’s work was making online — they warmed up to the idea. “I just slowly told them more about my art. And especially now, when I had my own solo exhibition, that’s when they were like, ‘Okay, so you want to take it seriously? We support you.”

Offgod also credits his parents with keeping him grounded.

“They questioned me about, you know, what if it fails? What if it doesn’t work out? What are you going to do?” he adds. “It’s changed my mindset and also pushed me to do more, to try harder, to get to that point where, even if it fails, you’re not screwed in life.”

While there’s no slowdown in sight for his art career — his work has now been exhibited multiple times with Hong Kong’s SHOUT Gallery, and he just released new Alita: Battle Angel-inspired cover art for Bella Poarch’s latest soon-to-be-platinum single, “Dolls” — that mindset has Offgod already exploring new avenues for his talents.

Most recently, he’s been putting in work on his next project, Bandage Boy, a clothing brand that he aims to launch later this year.

“I’ve always really liked clothes and the way people dress, and fashion is wearable art,” says Offgod, who spent the last two years dreaming up ideas for a clothing line. “But really, I want this brand to show a 17-year-old kid just experimenting and playing around.”

The name Bandage Boy is partly inspired by the accessories he would add to the faces of anime characters he sketched; it also pays homage to Tyler, the Creator’s critically acclaimed and Grammy-nominated album, Flower Boy — another favourite of Offgod’s.

“Bandage Boy! It’s a great name for a brand,” says the artist. “I pitched it to my management at the record label, and they loved it. So that was it.”

Despite having world’s biggest names in art, music and fashion at his fingertips, he elected to stick with his school friends to bring Bandage Boy to life. “It’s a group of us having fun and working on this brand. And I feel like that’s like very authentic. That’s one thing that I guess is missing in the fashion world, because I see so many brands just copying the big brands,” he muses. “They’re all very commercial. That’s one thing I hope mine will never turn into.”

But it doesn’t mean he’s not hoping to see success with Bandage Boy. In fact, he’s kinda banking on it. “I guess this clothing brand is also sort of a backup plan. With art, the income I get is from commissions and exhibitions, but I want something that gives me stable income,” adds Offgod. “With the fashion brand, I could drop a collection every few months and still get some money for myself.”

Wherever this unexpected journey takes him, Offgod is staying humble and enjoying the ride. He remains grateful to his older brother for teaching him how to draw, his parents for supporting his creative dreams and all the galleries, artists and stars he’s collaborated with for letting him have these “unreal” experiences on the daily.

Considering he has the sort of portfolio that creative types work entire lifetimes to achieve — all before his 18th birthday — I’m curious to know what’s on his own checklist. “I’ve always wanted to work with Disney, in the sense that I want to do character designs; it’s such a big goal for me,” he says. “And I definitely want to work with Tyler, the Creator; Kanye, which might be hard, but I’m a big fan of his fashion and music; also Steve Lacy, I really liked his album, so I really hope that I can work with him, too.”

Lastly, with this abundance of creative energy and myriad music icons just a DM away, is there any chance we’ll catch Offgod dropping a record of his own one day?

Special thanks to SHOUT Gallery and Warner Music Hong Kong.

Hong Kong Pharrell Williams Hong Kong Artists Illustrator future Takashi Murakami pharrell hong kong artist andrew mok offgod yalocaloffgod i love your work
You might also like ...
Culture
Haus of Contemporary’s Matt Chung wants to show Hong Kong artistry to the world
Culture
Hong Kong artist Afa Annfa is taking us all home through ‘The Magical Hoop’
Culture
Hong Kong artist Lousy on presenting at Art Central and his new show “LOUSY PEOPLE”
Culture
Geometric abstract artist Ryan Chan showcases his pensive musings at solo debut show
Nathan Erickson
Editor-in-Chief
Made in Seoul and based in Hong Kong, Nathan has covered food, fashion and music from New York to Paris to Oaxaca. He enjoys street photography, buying too many hooded sweatshirts and he'll never turn down a tequila soda. Catch him on weekends hiking trails all over Hong Kong in hopes of finding his idol, Chow Yun-fat.
Sign up for our newsletters to have the latest stories delivered straight to your inbox every week.