Since 7 March, Centralites may have spotted the colossal stainless steel figures of mythical warriors standing triumphantly across the Exchange Square atrium and upstairs Rotunda, thanks to Hongkong Land’s latest public art exhibition. Made of bronze and stainless steel, the sculptures embody themes such as self-determination, perseverance and creating harmony between humans and nature — an expression of young, Beijing-based sculptor Ren Zhe’s deeply entrenched beliefs in age-old Chinese philosophy.

Entitled “GANG: The Awakened Warrior,” this exhibition is one of the largest that Hongkong Land has ever presented on its expansive grounds, with a total of 18 works including six brand-new pieces. Ahead of the exhibition, Lifestyle Asia spoke with Ren Zhe about his indomitable craft. 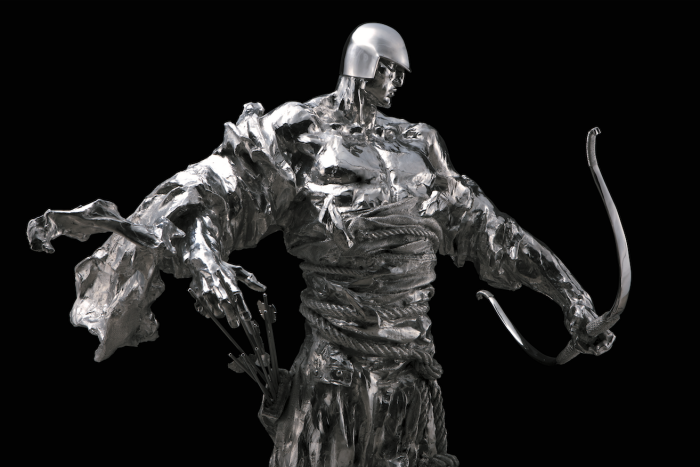 What got you interested in depicting heroes and ancient warriors?
I think everyone has their own hero in mind, and it is not something confined to battlefields. In fact, every industry has its own hero. It takes a lot of perseverance to be one, which I particularly appreciate and admire. That’s why I aspire to visualise the kinds of warriors that exist within every one of us, to reinterpret and portray it through my work.

Why is the exhibition named “GANG”?
The meaning of the Chinese character gang (罡) can be broken down into the idea of four positive elements within the character itself, [a combination of 四 and 正] which include the body, heart, word and action. Positive energy, especially in this fast-growing world, is crucial and essential. I wish to share the beauty of art and this positive energy with the public through my exhibition.

With 18 large-scale works, is there a particular piece that you think is the highlight?
The large-scale outdoor installation of Above the Clouds is the most impressive work to me. It’s a static, stainless steel work of a man floating above the clouds. [There are two figures, but] he himself is his only opponent. The work suggests self-transcendence in search of a better self. I believe this mentality is educational and inspirational. Also, its shiny mirror finish adds a modern touch that also matches the contemporary design of the surroundings.

Of your six new pieces, which was the most challenging to make and why?
I believe the most challenging piece for myself was Lei (雷). This sculpture is tall and heavy with very few supporting points, hence the creation process was fairly difficult. It was also hard to adjust the centre of gravity and balance. The sculpture presents a warrior who is ready to spread his wings and take off, so both lightness and strength have to be expressed simultaneously. It had to look powerful with a sense of ethereality, so it was quite difficult to sculpt for me. It took me four to five months to complete the first iteration. However, I wasn’t satisfied with it, so I tore it down and started all over again. It took me around a year to finally complete this masterpiece. I am a perfectionist, as I don’t want to regret anything later. This has always been my attitude towards every piece that I make. 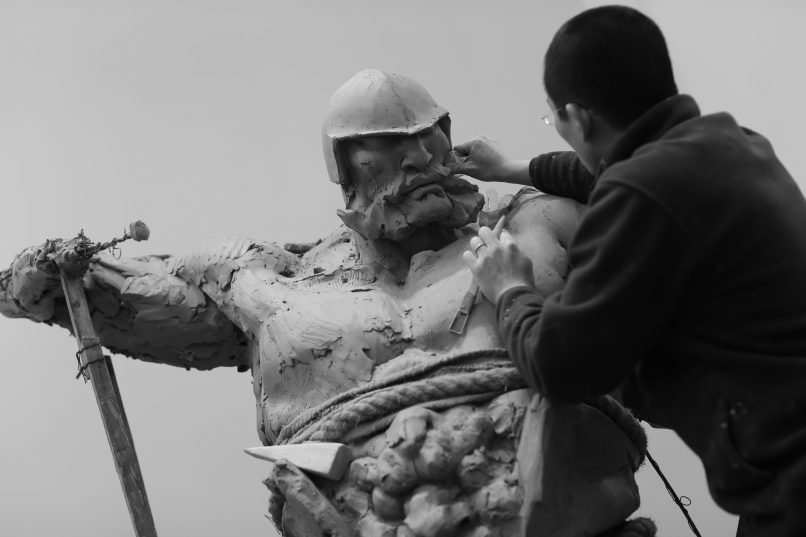 Can you briefly share your sculpting technique? Which part do you enjoy the most?
I focus on incorporating Eastern themes along with Chinese calligraphic techniques such as “splashing”, “line” and “freehand” styles. Also, I have always focused on the spirit rather than the form in my works. As for tools, I use wooden sculpture knives, and mainly my hands as they are the most versatile. I particularly enjoy the first clay sculpting process, where the interaction between the clay and my hands really brings the sculpture to life.

How do you make these ancient figures look modern?
I was born and raised in China — traditional Chinese values are rooted in my genes. In general, China’s aesthetic beauty is subtle but sophisticated. Its values and concepts unfold layer by layer, the longer you appreciate it, and changes depending on your mentality, life experiences and surroundings. I hope my works can implement this Oriental temperament, but also use modern materials and Western forms and technologies. This way, I can continue creating a global visual language to express something both Eastern and Western, something definitively beautiful.

Is there a hero character that you’ve always wanted to create but never have yet?
Yes, there are actually many. My next topic will be about warriors from Chinese ethnic minorities. Firstly, their image is usually more impressive and impactful; secondly, these cultures contain a lot of interesting myths or legends. In my next works, I’m excited to try and express more vivid human emotions and expressions. As I grow, I hope different experiences can help bring different perspectives to my work, so I can bring about deeper and richer meaning for each piece. Fundamentally, I will continue to connect Western and Eastern culture whilst integrating the timelessness of modern and traditional art forms. In between, I hope to find where I stand amongst these elements. 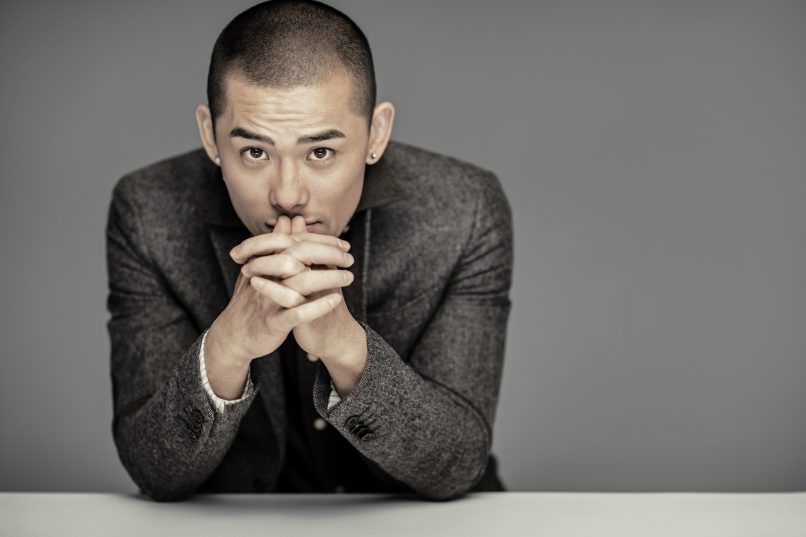 Would you ever create a self-portrait?
I thought about it and did create one before. But after I completed the sculpture, I always thought it did not look like myself. Perhaps it’s because I still haven’t truly understood myself yet! I often question myself during the creative process. I would visualise a character in my mind in a certain way, but he might not actually look like that in reality. Perhaps this is why artists tend to be idealists. Maybe one day I will create a warrior in my own image, but as of now, I do not have a concrete plan for it.

Which artists do you admire the most?
I admire the works of the Four Masters in the Yuan Dynasty (Huang Gongwang, Wang Meng, Ni Zan, Wu Zhen) and the Four Masters in the Ming Dynasty (Shen Zhou, Wen Zhengming, Tang Yan, Qiu Ying), amongst others. In Western art, I particularly admire works from the Art Nouveau period — that was the time when artists started breaking boundaries by incorporating Oriental and Western art forms and culture together. I travel abroad every year to visit different museums and galleries, to look for inspiration from the timelessness in their works, in order to prepare myself for the next challenge.