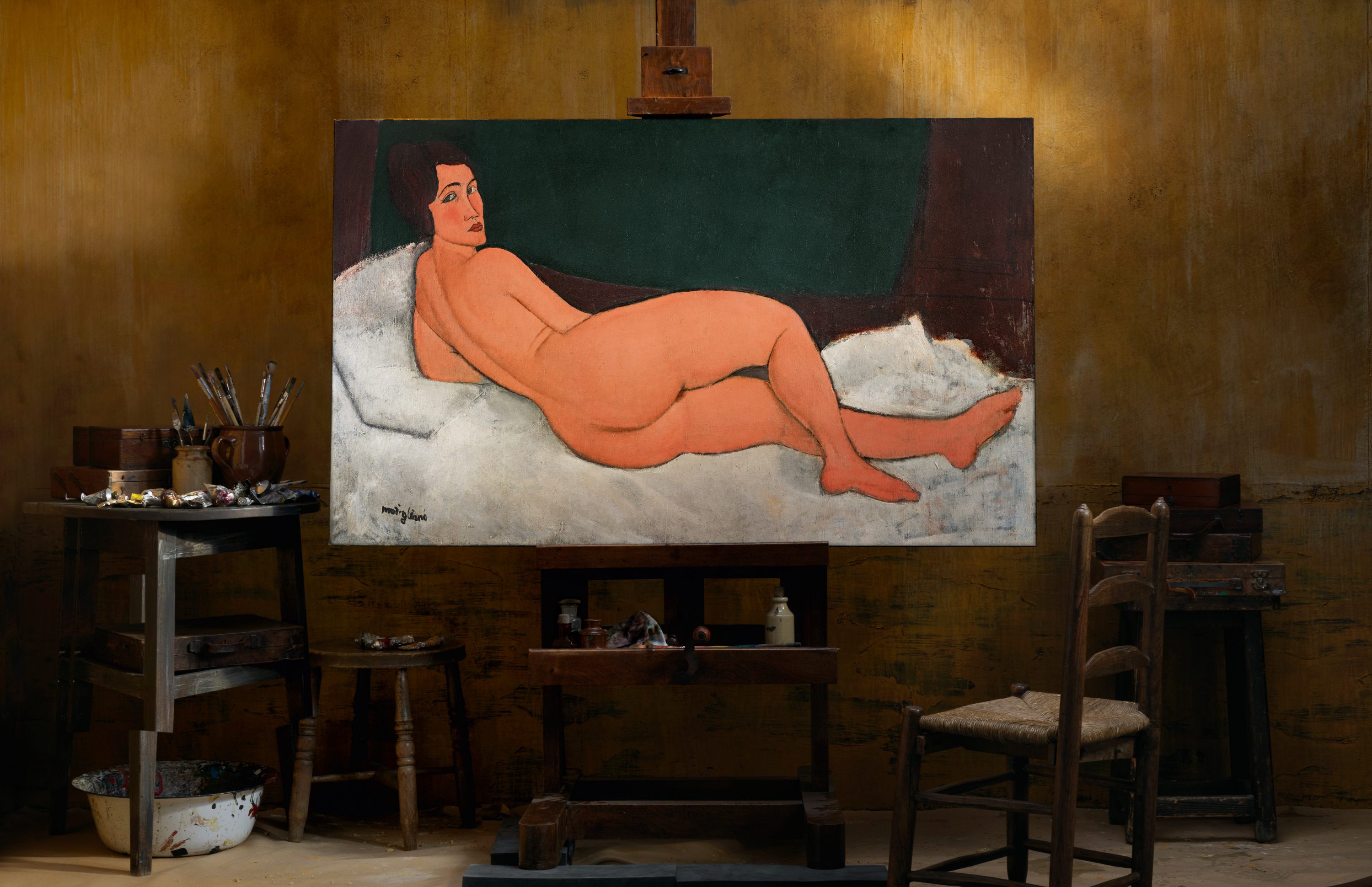 Last night, Lifestyle Asia was one of the lucky few media in Hong Kong to be able to catch the reveal of a secret masterpiece, deemed to be the most expensive estimate ever placed on a work at auction.

At 7:30pm sharp, Sotheby’s Hong Kong finally revealed the piece to be Amedeo Modigliani’s Nu Couché (sur le côté gauche), on which the auction house has placed an estimate in excess of US$150 million (close to HK$1.2 billion — that’s around the same price of two of the most expensive units sold in Hong Kong in 2017 put together) — setting the record for the highest ever estimate placed on a work of art at auction. It’s set to be sold at the Sotheby’s Impressionist & Modern Art Evening Sale on 14 May, and is currently on preview in Hong Kong for two days.

As the curtain was drawn, Simon Shaw, Co-Head Worldwide of Sotheby’s Impressionist & Modern Art Department introduced the masterpiece: Painted by Paris-based Italian legend Amedeo Modigliani, the Nu Couché is perhaps most publicly recognisable from being the recent cover star of the artist’s retrospective at the Tate Modern. Nu Couché is considered the finest example from Modigliani’s series of nudes, first exhibited in 1917 in a notorious show that sent shockwaves throughout the community. It was shut down down by the police on the day for the perceived obscenity of its contents (that is, for showing the model’s pubic hair).

The story goes that the exhibition was staged at Parisian dealer Berthe Weill’s gallery, which was right across from a police station. Due to the commotion and traffic caused by the show, an officer came to inspect and request the removal of the offending canvases. With Weill’s refusal, she was pulled to the police station, leaving the show closed — and Modigliani’s representative, Léopold Zborowski, was only able to sell two drawings at 30 Francs each.

“Modigliani depicted his models as confident and self-possessed in their sexuality. Nu Couché is an incredibly sensual image, with the sitter’s gaze meeting the viewer’s head-on in truly mesmerising fashion,” said Shaw.

Despite being a part of the classical canon of nude paintings, Modigliani also takes inspiration from a wealth of art history and across different cultures. Shaw added, “Modigliani assimilates a world of visual cultures across the centuries, from Egyptian, Japanese, African, Indian and Iberian sculpture, from Renaissance frescoes through Romanticism to the cutting-edge of Cubism. Together these pictures signal a watershed in perhaps the greatest tradition in art — there is the nude before Modigliani, and there is the nude after Modigliani.”

More on why the Nu Couché is deserving of such a price tag, it is also the largest of the artist’s entire oeuvre at 147cm across, and is the only one of his horizontal nudes to contain the entire figure within the canvas. It’s also incredibly rare: Of 22 reclining nudes ever painted in the same seres, only nine of them remain in private hands, and this is one of them.

The Nu Couché was acquired by the present owner at auction in 2003 for US$26.9 million (approximately HK$211 million). In 2015, another reclining nude from the same series was also sold at auction for US$170.4 million, which became the second-highest price ever paid for a work of art at auction.

It seems highly likely that this painting will make new waves for the world of auctions. Last year, Leonardo Da Vinci’s Salvator Mundi, a long-lost painting of Jesus Christ, was estimated at around US$100 million, only to smash auction records by selling for US$450 million at Christie’s New York, more than fourfold its estimate.

The painting is set to go under the hammer at the upcoming Sotheby’s Impressionist & Modern Art Evening Sale on 14 May 2018 in New York, and will be available for preview in New York from 4 May.

Christie's Auctions Sotheby's Paintings Amedeo Modigliani Art Auctions Sotheby’s Hong Kong Impressionist Modern Art Auction Records
Evelyn Lok
Managing Editor
When not trying out the latest beauty and wellness trends, Evelyn is likely enjoying a perfectly balanced negroni or exploring some of Hong Kong's best new places to eat and drink. At Lifestyle Asia she covers everything from the biggest events in town to interviews with Hong Kong specialists, with topics spanning art, food and drink, health, tech, and travel.
Beauty Wellness Events Art Drinks
Sign up for our newsletters to have the latest stories delivered straight to your inbox every week.