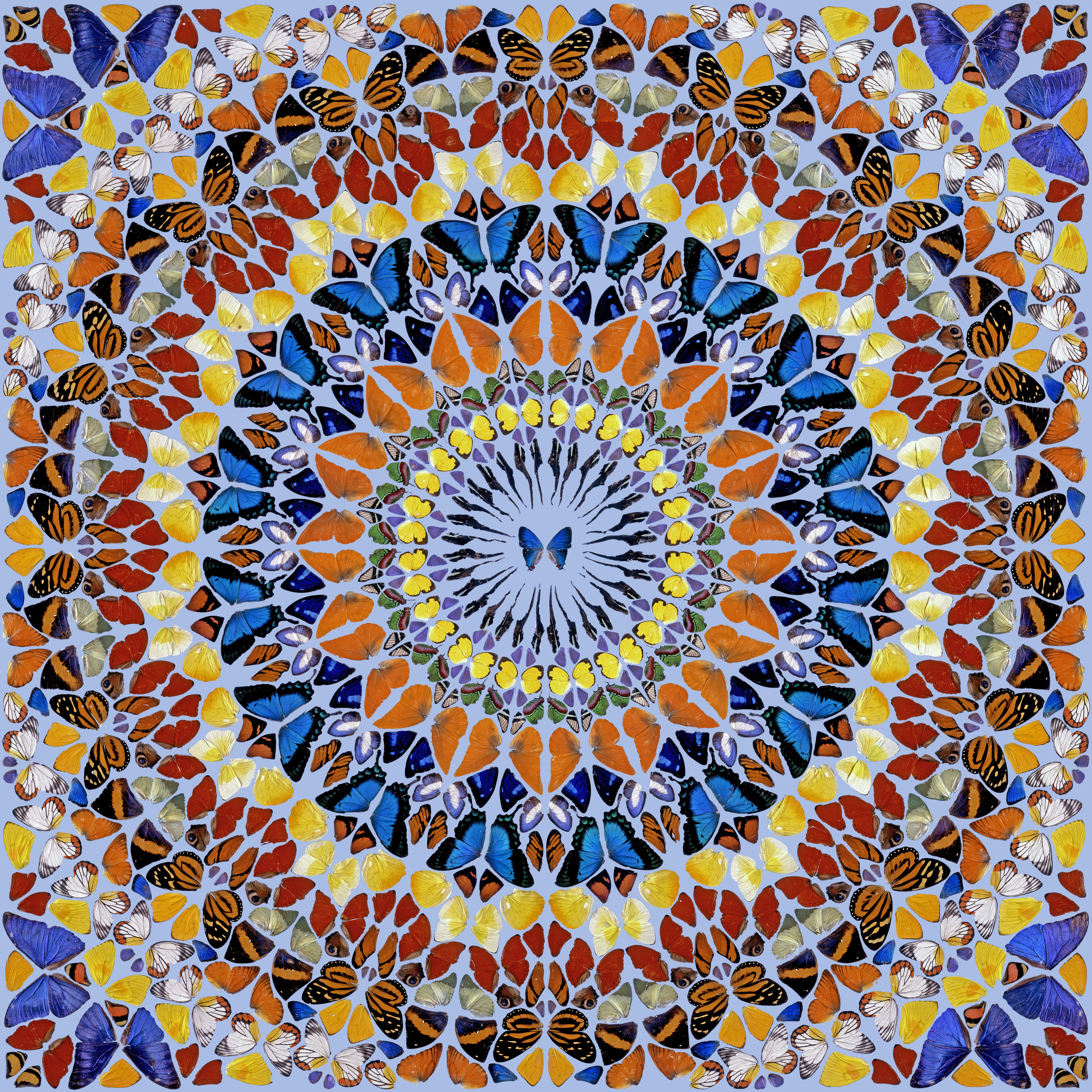 What to bid on at Bonhams’ upcoming art auctions

Private British auction house Bonhams is gearing up for two major art auctions — Modern & Contemporary Art (21 November, 4pm) and Unplugged (21 November, 6pm) — covering more than 120 pieces in total from renowned local and international artists. All works will be on preview at the Bonhams Hong Kong galleries (20/F, One Pacific Place, 88 Queensway, Admiralty) from 17–21 November, and you can also see them at the Bonhams’ auction preview cocktail event, sponsored by premium Bordeaux Wines and the World’s Best Gin&Tonic by Kyrö Distillery Company (http://www.foodlinkers.com). In the meantime, we’ve looked through all the lots and picked our favourites. Here are 10 alluring art pieces to set your sights on.

This article is sponsored by Bonhams. For enquiries, please contact contemporary.hk@bonhams.com. 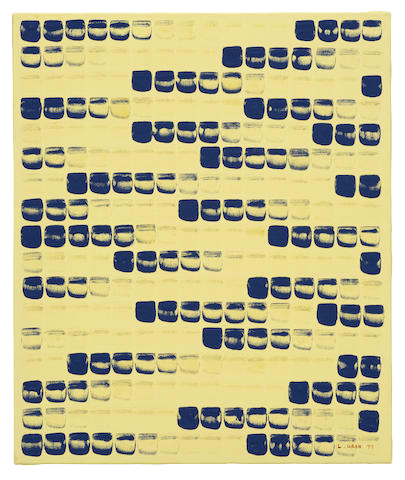 This calming piece from 80-year-old Lee Ufan (李禹煥), one of the oldest and most influential Asian artists still working today, is meant to encapsulate one of the fundamental paradoxes of Buddhism: “In presence, there is always absence.” Working against a backdrop of animal skin glue on canvas, Lee brushes mineral pigments left to right until the brush is dry, repeating the act to create the receding forms shown on the canvas, titled From Point. A Hong Kong student of art in the 1950s, Richard Lin first launched his career in England and throughout Europe, before returning to live in Taiwan until 2002. As evidenced by this artwork, Painting Relief, Richard’s work is largely inspired by the minimalist art movement that emerged in the 1960s after the Second World War. In this piece, simple silhouettes are explored through squares, rectangles and lines. 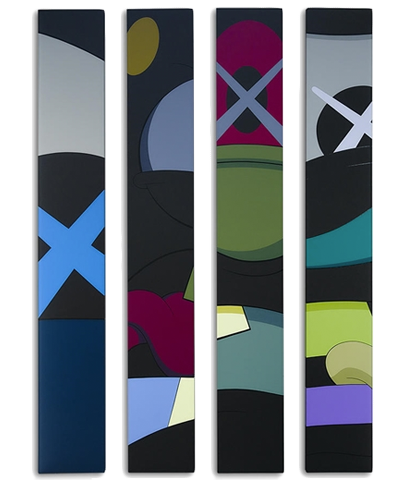 Accessible to both the casual art collector and the bona fide art expert,  the artist known as KAWS has become one of the most in-demand pop artists working today. His works seek to break down the often impenetrable barriers of high art, often featuring recognisable — yet distorted — imagery, such as a muscular Michelin Man or an ominous-looking Mickey Mouse. This artwork, T. N. O. N. — I, is from a 2012 project titled The Nature of Need, composing 50 narrow vertical canvases each expressing an abstract interpretation of the cartoon SpongeBob SquarePants. 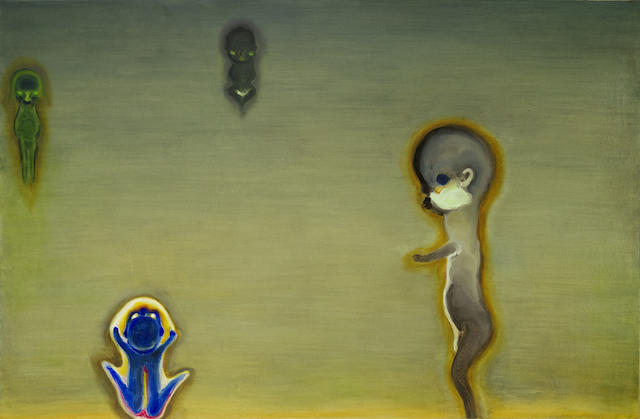 Japanese artist Izumi Kato evokes an anime-inspired fantastical world in his paintings and sculptures. Often dabbling in the extraterrestrial or tribal Africa, Kato makes use of primordial images and face shapes with strong colours to maximise visual impact. A sense of ambiguity is ever-present in his artworks, reinforced by his decision to keep them all untitled. 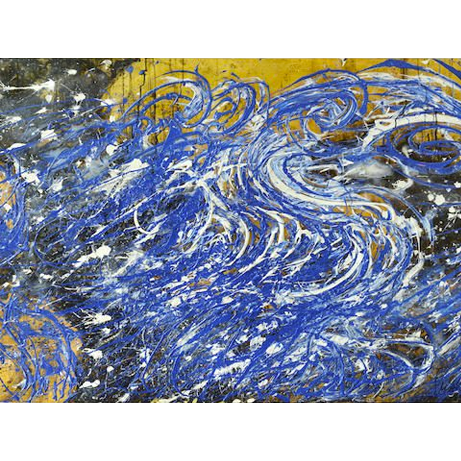 Japanese postwar art has taken off in recent years, with special attention and emphasis placed on works from the radical post-war art collective, the Gutai group, thanks in part to influence from the artist Toshimitsu Imai. Artwork by Imai is free-spirited, often ending in a burst of colour and energy on the canvas, as shown here in his vivid depiction, Work. No, that’s not just an ordinary rock — this natural tabletop sculpture is actually a complete Gibeon iron meteorite recovered from the edge of the Kalahari Desert by local tribesmen from a meteorite shower that occurred thousands of years ago. How’s that for a conversation starter piece? 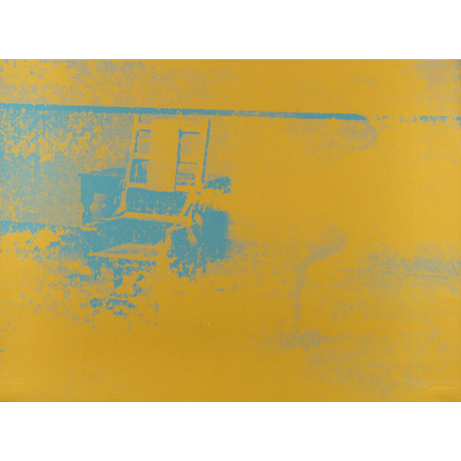 Legendary artist Andy Warhol created a portfolio of ten different Electric Chairs in 1971, inspired by the controversy surrounding the death penalty in America. This edition is bathed in orange, depicting an empty electric chair complete with a high-backed frame and leather straps. Warhol created many artworks exploring violent deaths in his career as a means of dealing with the subject matter, stating “When you see a gruesome picture over and over again, it doesn’t really have any affect.” 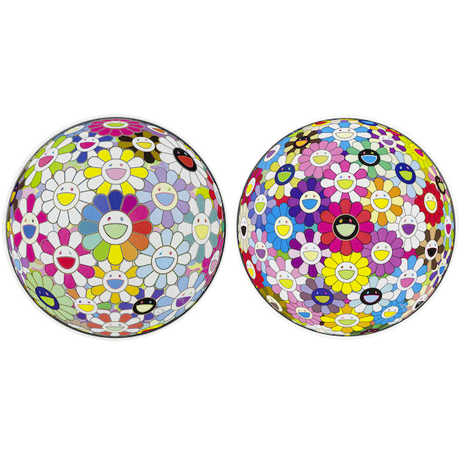 8
'Flowerball: Want to Hold You & Multicolors' by Takashi Murakami

One of TIME magazine’s 100 most influential people in the world, Asian contemporary artist Takashi Murakami’s style is a splash of colour, anime and otaku culture fused into one. His Flowerball prints have exploded in popularity worldwide, the famous smiley flowers influenced by his time as an art teacher teaching kids to draw simple elements of nature. Kindness, by celebrated artist Damien Hirst, showcases the wonderment of how a singular pattern and shape can be woven into an intricate artwork through the use of repetition and colour. This particular collage is formed from the shape of a butterfly, meticulously composed of alternating wings to create an overall aesthetic reminiscent of the stained glass windows of old cathedrals. 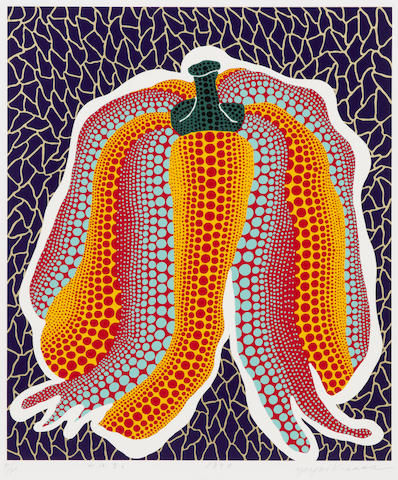 Fitting for fall, the prosaic pumpkin is brought to life by Yayoi Kusama in this silkscreen print on paper, Pumpkin, alive with shades of orange, red and violet. The everyday squash symbolised something much more, a type of alter ego, for Yayoi, who in her illustrious career has created a dazzling selection of pumpkin-themed works.

Art Culture Bonhams Auction Auctions Arts & Culture
Leslie Yeh
Editor in Chief
Having worked as a lifestyle editor for almost 10 years, Leslie is thrilled to be writing about the topic she loves most: wining and dining. When she's not out pounding the pavement for the latest new restaurant opening or tracking food trends, Leslie can be found at home whipping up a plate of rigatoni vodka and binge-watching Netflix with a glass of Sauvignon Blanc in hand.
Dining Restaurants Food Trends Drinks Travel