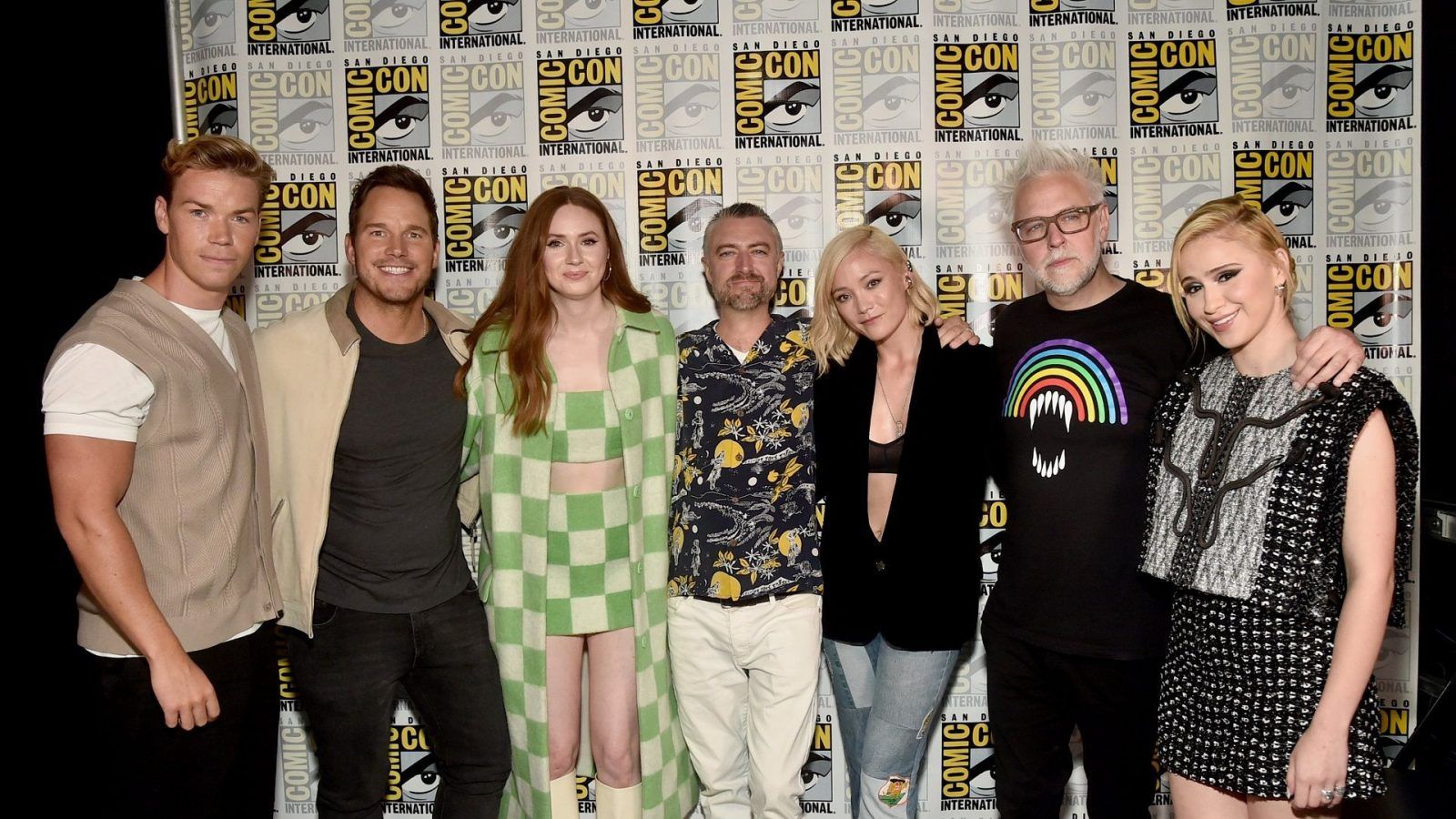 All the Marvel Cinematic Universe announcements at Comic-Con 2022

Marvel Studios returned to San Diego Comic-Con (SDCC) 2022, for the first time in three years. It took the moment to announce a slew of Marvel Cinematic Universe (MCU) films and shows as part of Phase 5 and Phase 6 in one fell swoop to the excitement of fans present at SDCC 2022 and beyond.

Speaking on the stage of Hall H at Comic-Con on 23 July 2022, Marvel Studios president Kevin Feige unleashed a host of titles from the franchise through 2025. Among them were two new films featuring the Avengers.

You might also like…
Culture
Chloé Zhao on directing Marvel’s “Eternals” and her passion for the genre
Culture
‘Shang-Chi’: What to expect from Marvel’s first Asian superhero

Wearing a hat bearing Miss Minutes, the animated clock character seen in the first season of Loki (2021–), Feige unveiled MCU Phase 5 containing 12 films and shows in all. He also revealed some titles of Phase 6 with their estimated release windows.

Feige said that Black Panther: Wakanda Forever, set to release on 11 November 2022, will mark the end of Phase 4. The announcement was followed by the first official teaser release of the highly anticipated film and an emotional tribute to the late Chadwick Boseman by the film’s director Ryan Coogler.

According to the franchise’s plans, Phase 5 will begin on 17 February 2023. The first title in the phase will be Ant-Man and the Wasp: Quantumania. It will end on 26 July 2024 with the movie Thunderbolts.

Among the titles is the confirmation of a new Captain America film and the return of Daredevil.

The film will also feature Kang the Conqueror (Jonathan Majors), a version of whom was seen in the first season of Loki.

Samuel L Jackson will return as Nick Fury while Ben Mendelsohn will reprise his role of Talos in this Disney+ series.

Cobie Smulders will also be back as Maria Hill.

A trailer of the film was shown to those present in Hall H at SDCC 2022. The trailer was unveiled by writer and director James Gunn, who confirmed that the film marks the end of the much-loved dysfunctional group of heroes in the MCU.

“This is the end of that story. I’m sorry. Some stories have an end. It doesn’t mean everybody dies,” he said.

The Disney+ series will focus on the character of Maya Lopez aka Echo, the deaf amputee heroine played by Alaqua Cox in the series Hawkeye (2021).

Vincent D’Onofrio will also be seen in the series as Wilson Fisk aka Kingpin. Among other cast members are Devery Jacobs, Chaske Spencer, Cody Lightning, Graham Greene, Tantoo Cardinal and Zahn McClarnon.

Echo will also mark the first appearance of Charlie Cox as Matt Murdock/Daredevil before he headlines his own series later in the MCU Phase 5. Cox played Daredevil in the series of the same name that streamed on Netflix from 2015 to 2018. He did a cameo as Matt Murdock in Spider-Man: No Way Home (2021).

The story of The Marvels will focus on the superhero characters Carol Danvers/Captain Marvel (Brie Larson) and Kamala Khan/Ms Marvel (Iman Vellani). Teyonah Parris is set to play S.W.O.R.D. agent Monica Rambeau. The film will be directed by Nia DaCosta.

While Larson headlined her own MCU film in 2019, Vellani became a major star following the criticially acclaim of Ms. Marvel (2022) series on Disney+.

One of the most anticipated Disney+ MCU shows, season 2 of Loki is expected to reveal more about the consequences of disturbing the flow of time by Loki (Tom Hiddleston) and Sylvie (Sophia Di Martino) at the end of season 1.

Blade is one of the most iconic characters in Marvel Comics. Feige introduced Oscar-winner Mahershala Ali as Blade in Hall H at the SDCC 2019.

The half-vampire was teased off-screen in the post-credits scene in Eternals (2021). Ali will be joined by Aaron Pierre and Delroy Lindo in the film, which will be directed by Bassam Tariq.

At the recent SDCC, Feige said that shooting for Blade will begin in October 2022.

The Disney+ series is about Riri Williams, a 15-year-old tech wizard who creates her own armour suit and becomes Ironheart. Seen as the heir apparent to Tony Stark in the MCU, Williams will be played by Dominique Thorne.

But Thorne will make her debut as the character in Black Panther: Wakanda Forever, the teaser of which shows her meeting Shuri (Letitia Wright) and hammering out her unique heart-shaped logo.

Agatha: Coven of Chaos is a spin-off of WandaVision and focusses on the character of Agatha Harkness (Kathryn Hahn) who is an evil witch.

Formerly titled Agatha: House of Harkness, its new title was revealed at SDCC 2022. The spin-off was announced in 2021 following positive reception of the character from fans.

The massive series featuring 18 episodes marks the official entry of Charlie Cox as Matt Murdock in Disney+. Vincent D’Onofrio will also be back as Kingpin. No other cast member has been confirmed.

Feige’s announcement of a new Captain America film was one of the biggest moments at the SDCC 2022.

It will be the first time Anthony Mackie will play Captain America on the big screen. In the Disney+ series The Falcon and the Winter Soldier (2021), Mackie’s character Sam Wilson is seen struggling with his new identity of Captain America while still retaining his older superhero alias of Falcon.

A movie featuring the band of Marvel supervillains causing mayhem was announced in June 2022. Officially titled Thunderbolts, Feige said that Phase 5 will conclude with this film.

Not much is known about Thunderbolts. In the comics, several supervillains come together as Thunderbolts. But the most famous of them is the one formed by Baron Zemo. Daniel Brühl appeared as Zemo in the MCU.

As per Marvel Studios’ plans, Phase 4 through Phase 6 will together be known as the ‘Multiverse Saga’. Phase 4 began with the Disney+ series WandaVision. As for Phase 6, Feige announced three titles at SDCC.

Marvel Studios welcomes you to The Multiverse Saga. pic.twitter.com/HC1b747YPl

The first film in Phase 6 will be Fantastic Four. It is set for release on 8 November 2024.

The announcement about Fantastic Four wasn’t unexpected. Also, fans got to see John Krasinski as Reed Richards, the leader of the Fantastic Four, in Doctor Strange in the Multiverse of Madness (2022).

But, what came as a surprise to fans at SDCC was the announcement of two new Avengers films.

Fantastic Four will be followed by Avengers: The Kang Dynasty on 2 May 2025 and Avengers: Secret Wars on 7 November 2025.

Avengers: Secret Wars will mark the end of Phase 6 and, thereby, the conclusion of ‘Multiverse Saga.’

marvel marvel cinematic universe SDCC 2022 MCU Phase 5 MCU Phase 6
Manas Sen Gupta
Manas enjoys reading detective fiction and writing about anything that interests him. When not doing either of the two, he checks Instagram for the latest posts by travellers. Winter is his favourite season and he can happily eat a bowl of noodles any time of the day.
Travel Culture Entertainment Food
Sign up for our newsletters to have the latest stories delivered straight to your inbox every week.