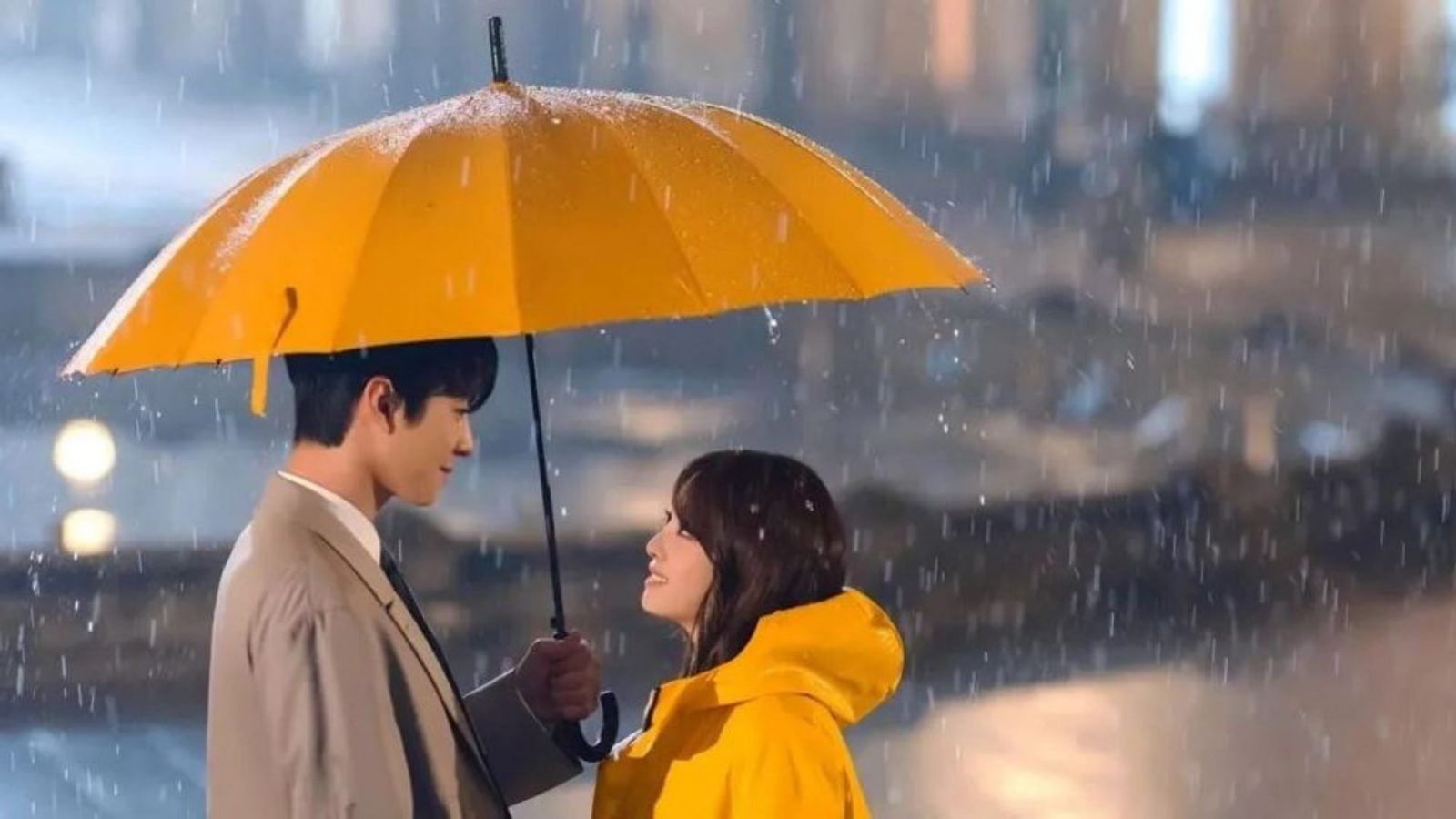 From an art gallery to a multinational conglomerate – some of the dreamiest moments in Korean television history have occurred at a workplace setting. Grab your popcorn, these office romance K-dramas – complete with quirky first dates, slow-burn love, and stunning leads – will keep you hooked.

Between suspense thrillers, coming-of-age comedies, and historical sagas – the world of K-dramas has the most eclectic set of genres to explore. That said, the undisputed king of them all is romance. Whether it’s the classic, adventure-driven Crash Landing On You or the breezy, feel-good Hometown Cha Cha Cha – this genre features characters discovering love in unlikely places.

Of late, this includes boardrooms, art galleries, courtrooms, cafes, and labs. In fact, K-dramas that feature office romances have been furthering the Hallyu wave around the world. And whether you enjoy the ‘rich-CEO-meets-poor-employee’ trope or are just looking for an entertainer to fuel your next binge session, these dramas won’t disappoint.

Add these K-dramas with office romances to your Netflix watchlist

You might also like…
Culture
8 fantasy K-dramas on Netflix that will make you believe in magic again
Culture
Loved ‘Business Proposal’? Here are 7 more rom-com K-dramas to watch

Undoubtedly one of the most popular romantic comedies of this year, Business Proposal follows a capable Kang Tae-moo, the CEO of Go Food who decides to go on a pre-arranged blind date to appease his overbearing grandfather. While there, he meets his employee Shin Ha-ri, who shows up (in disguise) in place of her best friend hoping to be rejected. Things however don’t go according to plan when Tae-moo proposes to her in order to avoid further similar dates. As she works to hide her identity around her boss, she finds herself in several entertaining situations. Think flying heels, dreamy dates, and banter so hilarious you’ll find yourself chuckling through it all.

A popular legal drama, Suspicious Partner (or Love In Trouble) follows the life of prosecutor Noh Ji-wook and his trainee Eun Bong-hee who work together to solve a murder. The latter, who’s entangled in the case as a suspect, relies on the former’s experience to clear her name. Along the way, they grapple with corrupt officials, near-death experiences, and their blossoming feelings for each other. Besides, in true K-drama fashion, there’s plenty of hilarious banter and comedic misunderstandings as well. If you enjoy your romance shows with a heavy dose of action, this K-drama won’t disappoint.

Wildly popular and often hailed as being the gateway K-drama for most people around the globe – What’s Wrong With Secretary Kim? takes a look at a perfectionist, complex, and conceited Lee Young-joon who’s the vice chairman of a multinational corporation. Right by his side is the capable and intelligent Kim Mi-so, his secretary. Together, the two make an efficient team but things change when the latter decides to quit her job to pursue personal interests. As Young-joon works to get her to change her mind, the two find themselves in a series of misunderstandings, hilarious banter, and some of the most extravagant dates in K-drama history. The show doesn’t take itself too seriously, making for a lighthearted watch.

This series looks into the life of visionary Seo Dal-mi who dreams of being Korea’s Steve Jobs by climbing her way to the top of an AI firm without a college degree. With her first love, programmer Nam Do-san by her side, she navigates all the challenges that come with launching a startup. Also in the spotlight? Investor Han Ji-pyeong. As these entrepreneurs walk the path to realising their dreams in Seoul’s cut-throat job culture, you’ll come across a host of pitches, investor hunting, networking, and conversations around money. If you’re the kind to root for the underdog, this drama will keep you hooked.

Park MinYoung’s chic, power pantsuits are reason alone to watch this K-drama but the dreamy will-they-won’t-they romance that underlines her character Sung Duk-mi’s relationship with her tough boss Kim Jae-wook is a good second. The only catch? She’s secretly a K-pop fanatic. The series features hilarious instances of pretend-dating, quirky dialogues, and dreamy dates. That, along with the classic CEO-employee romance trope caught on with viewers and how! Watch for the eclectic yet classic fashion, stay for the romance.

Forecasting Love And The Weather

Another popular K-drama that aired at the same time as Business Proposal, Forecasting Love And The Weather gives viewers an insight into the office of a national weather service (South Korea Meteorological Administration). In the spotlight are capable and rule-abiding Jin Ha-kyung, recently-appointed director and Lee Shi-woo, an intelligent reporter who doesn’t always go by the norm. As they navigate both, the weather and their relationship, you’ll find yourself crying, laughing, and rooting for the two.

In a hilarious series of events, Lee Yoo-mi meets Cha Jin-wook at a wedding and spends the night with him only to, years later, discover that she’s been hired to be his nutritionist. While he tries to woo her, you’ll notice instances of wealth differences, misunderstandings, and sweet confessions. Not to mention, there are enough cliches to put the cheesiest romantic shows to shame. A charming, playful boss with a capable employee – this one makes for a light-hearted watch.

This beloved K-drama follows Do Bong-soon, a gifted woman who has superhuman strength and dreams of starring in her own video game. Enter MinHyuk, a gaming company CEO who’s in need of a bodyguard. When the latter hires the former, a series of hilarious events ensue. This includes fist fights, petty misunderstandings, pole dancing, gang wars, and a ton of office romance. Between the goofy disposition of the male lead, the determined zeal of the female lead, and the intriguing storyline, boredom is not an option.

A popular K-drama that explores supernatural themes, Hotel De Luna – located in downtown Seoul – is a peculiar establishment that serves the dead. The space is also visible to souls, ghosts, and humans at certain specific times of the year. Moody CEO Jang Man-wol is cursed to run the place to make up for sins she committed in the past, yet can no longer remember. Also in the picture, straight-arrow Goo Chang-sung who has to join her over a messy deal his father had made. Together they discover love and loopholes that will keep you hooked.

As the name suggests, this series follows an introverted CEO of a public relations company who crosses paths with a cheery new employee. While the former finds it hard to be around people, the latter is bursting with energy for social obligations. What follows is a classic ‘opposites attract’ trope, complete with humorous dialogues and dreamy confessions. Although this series is quite popular, it’s quite divisive. And while your mileage may vary, the storyline is worth a watch.

K-dramas K-Dramas in India Romantic K-dramas
Eshita Srinivas
Eshita spends her days writing, rewriting, and thinking of things to write about. In the little time she has left, she daydreams about going on a solo trip across Asia.
Travel Food Drink Entertainment
Sign up for our newsletters to have the latest stories delivered straight to your inbox every week.