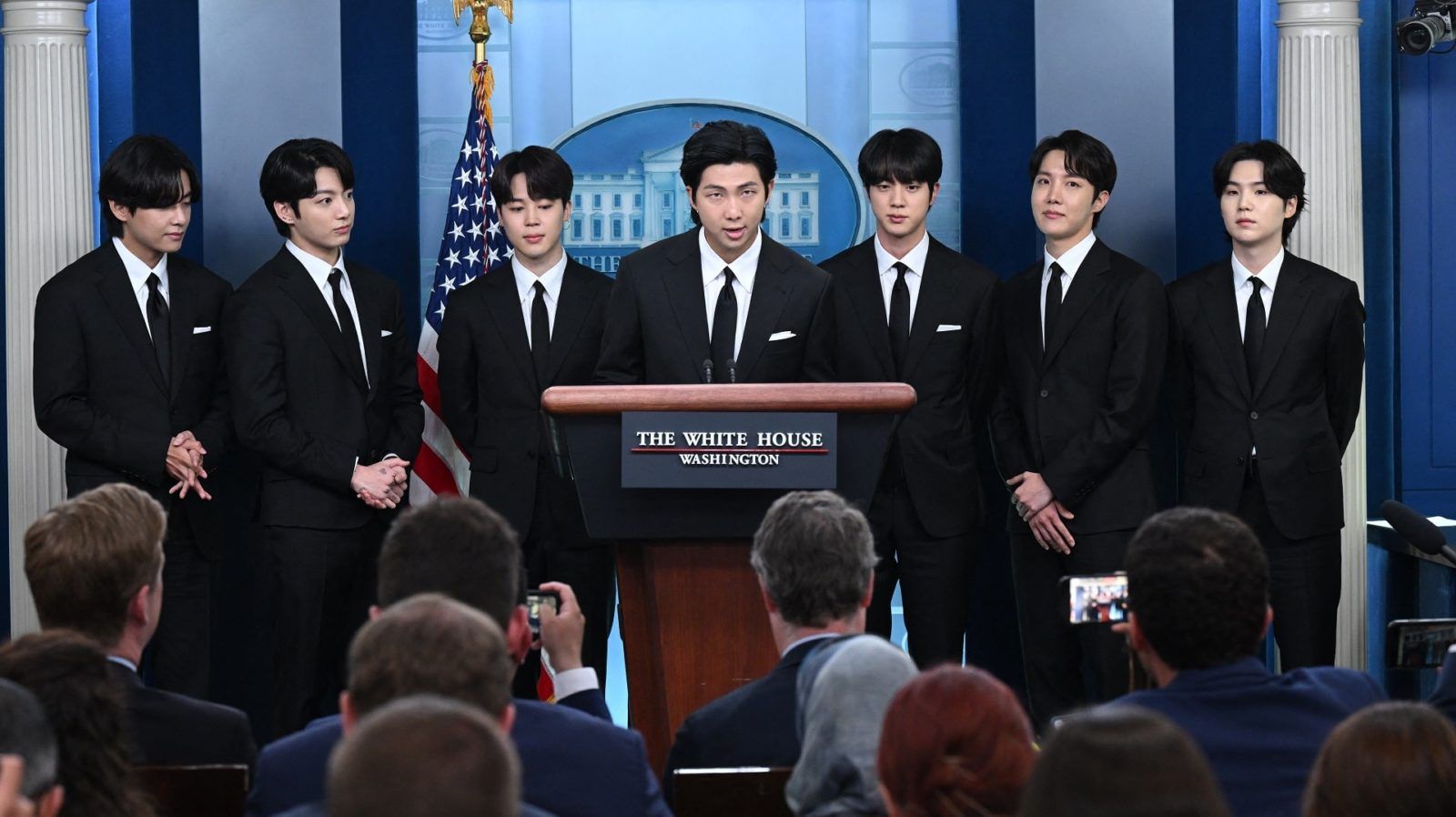 K-pop supergroup BTS met US President Joe Biden and made a special appearance at the White House press briefing on 31 May to send a powerful message concerning rising cases of anti-Asian hate crimes in the US.

The historic meeting between the world’s most famous Korean pop band and the American president came on the last day of Asian American, Native Hawaiian and Pacific Islander Heritage Month, or AANHPI Month.

BTS at the White House

Biden and BTS’ meeting was not open to the press, but the official Twitter handle of the POTUS released a short video showing snippets from their interaction.

“This is an important month in America. A lot of our Asian American friends have been subject to real discrimination,” Biden says, after welcoming the septet. “Hate only hides. When good people talk about it and say how bad it is, it goes down. So thank you.”

RM, the leader of the BTS, proceeds to thank the US President for signing the COVID-19 Hate Crimes Act into law.

“So, we just want to be a little help and we truly appreciate the White House and the government’s trying to find solutions,” RM says.

Biden then tells the BTS that people care about what the group has to say and that the message they are communicating “matters” a lot.

It was great to meet with you, @bts_bighit. Thanks for all you’re doing to raise awareness around the rise in anti-Asian hate crimes and discrimination.

I look forward to sharing more of our conversation soon. pic.twitter.com/LnczTpT2aL

The universally acclaimed seven-member music group arrived in the US a few days ago for their meeting with the US President, which was held after their White House address.

What the members said at the press briefing

Wearing black suits and black ties, each of the seven members — RM, Jin, Suga, J-Hope, Jimin, Jungkook, and V — took turns at the lectern of the James Brady Briefing Room to address the press before their meeting with Biden.

RM was the first to speak after the group was introduced by press secretary Karine Jean-Pierre.

“Thank you, Karine, for your kind words. Hi, we’re BTS, and it is a great honour to be invited to the White House today to discuss the important issues of anti-Asian hate crimes, Asian inclusion, and diversity,” he said in English.

The other members spoke in Korean, which was translated for the press by an interpreter.

“Today is the last day of AANHPI Heritage Month. We are here at the White House today to stand together with the AANHPI community and to commemorate the occasion,” Jin underlined.

“We were devastated by the recent surge of hate crimes, including Asian American hate crimes. To put a stop on this and support the cause, we’d like to take this opportunity to voice ourselves once again,” Jimin followed up.

“We are here today thanks to our ARMY, our fans worldwide, who have different nationalities and cultures and use different languages. We are truly and always grateful,” said J-Hope.

“I still find it amazing that music made by Korean artists can transcend language and culture to reach so many different people all over the world. I think music is a truly great medium for being able to bring us all together,” Jungkook added.

Suga pointed at the need for equality.

“It’s not wrong to be different. I think equality begins when we open up and embrace all of our own differences,” he said.

V backed Suga’s comment, saying, “We each have our own history. I hope today can be another step towards respecting one another and acknowledging that each and every one of us is a valuable person.”

The concluding remark was delivered by RM.

“And lastly, we thank President Biden and the White House for giving this important opportunity to speak about the important causes, remind ourselves of what we can do as artists. Once again, thank you very much,” the group leader said in English.

The group did not take questions from the press and left immediately for their meeting with President Biden.

🙏 @BTS_twt for speaking out and using your platform as artists to share a message of positivity & hope, promoting diversity & inclusion #AAPIHeritageMonth @whitehouse! pic.twitter.com/8pPMAHLhnJ

The BTS address led to a massive surge in viewers of the livestream on the official White House YouTube channel.

According to CNBC, there were more than 310,000 simultaneous viewers on the livestream watching the Grammy-nominated group speak at the White House. Out of them, around 200,000 dropped off within minutes of BTS leaving the livestream.

Anti-Asian hate crimes on the agenda

Before their address, Karine Jean-Pierre said that BTS was invited by President Biden for “a discussion about Asian inclusion, representation, and diversity, as well as addressing anti-Asian hate crimes and discrimination.”

Jean-Pierre said that the BTS members “play an important role as youth ambassadors promoting a message of respect and positivity”.

Anti-Asian hate crimes in the US rose sharply following the start of the COVID-19 pandemic in 2020. The incidents prompted several prominent Asian-origin celebrities joining protesters on the streets and using their social media accounts to voice their concerns.

White House bts asian hate AANHPI Month
Manas Sen Gupta
Manas enjoys reading detective fiction and writing about anything that interests him. When not doing either of the two, he checks Instagram for the latest posts by travellers. Winter is his favourite season and he can happily eat a bowl of noodles any time of the day.
Travel Culture Entertainment Food
Sign up for our newsletters to have the latest stories delivered straight to your inbox every week.