“You underestimate how the smallest decisions can compound into significant differences over a lifetime,” says Alpha Waymond. That’s exactly why the recognition of Everything Everywhere All at Once at this year’s Golden Globes matters.

2022 is a good year for film enthusiasts. Bullet Train comes out as an underrated gem, Glass Onion is an enjoyable continuation of Knives Out, The Banshees of Inisherin becomes one of Martin McDonagh’s best works to date—and that’s just the tip of the iceberg.

One of the most beloved film of this year is undoubtedly Everything Everywhere All at Once, starring Michelle Yeoh and Ke Huy Quan as leading roles, and directed by Daniel Kwan and Daniel Scheinert. It’s a multi-genre film about the journey of Evelyn Wang (Michelle Yeoh) who is quite possibly the only one in any timeline to save the multiverse. As it embarks on the journey, she must come to terms with the decisions she has made throughout her life, along with re-examining the relationship with her family.

The journey has stuck with the audience for many reasons, and it has since then been recognised amongst critics along with many awards show internationally. Here’s why a film like this, being recognised at this level, matters.

What's On
Golden Globe Awards 2023: Michelle Yeoh wins best actress for ‘Everything Everywhere All at Once’ 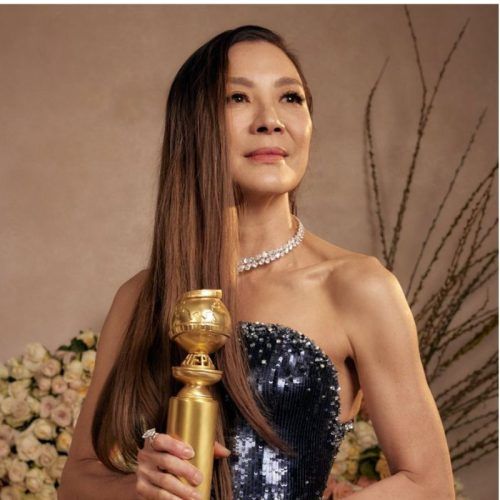 Representation matters. Of course, Asians have been taking leading roles in Hollywood since the silent film era, but to be recognised on a global scale is another subject entirely.

The Golden Globes had the first performer of Asian descent to win in a lead actress film category in 2020—Awkwafina in The Farewell. That year, Bong Joon-ho’s Parasite also won best foreign language film. So, per calculator, that only took Asians 76 years to win and be accepted on equal grounds as everyone else.

Imagine yourself as a child looking through your preferred entertainment medium. You see someone just like you—someone you can look up to—someone you aspire to be. “If I can make it, you can too,” and you believe them. That’s why representation matters.

“Once you overcome the 1-inch-tall barrier of subtitles you will be introduced to so many more amazing films,” said Bong Joon-ho as he received the award.

We can overcome the infamous Asian generational trauma

Asians joke about strict parents and high expectations, because that’s what we’re really used to. The jokes about us being pushed to be a doctor or a lawyer, or some high-paying job with a “good face in the society” are true. The jokes about us being questioned about grades and why we can’t make them better are true. The ones where you can’t talk back to your parents are all true. At least, for many of us.

When our parents are wrong, most of the time, the best apology we’ll get is a call to come eat dinner. Did we really like that? Not really. But many still pass it on to their children, and the cycle of trauma—of the high expectations and non-communicative relationships—keeps going.

This film, along with many films that came out recently, remind parents that it’s okay to talk to your kids directly. Our pride isn’t going to be hurt if we have a heart-to-heart once in a while, and that understanding your children’s hopes and dreams isn’t really a crime against your ego. Of course, we care, and we can all strive to show that a bit more healthily.

Everything Everywhere All at Once had a budget of USD 14.3 million. That may sound like a lot without a comparison, so let’s compare it to another multiverse-jumping film released in the same year. Doctor Strange in the Multiverse of Madness had a budget of USD 955.8 million.

The limited amount of resources, as strategically used as possible, ended up shaping the film’s aesthetic to be what it is. They couldn’t aim to emulate a big-budget film, they didn’t have access to many high-end computers, and CG was being used sparingly. The result is a charming 80s aesthetic with motion graphics. It’s not trying to be something it’s not, and makes for an interesting study for other filmmakers.

Ke Huy Quan started his acting career as a child actor when he was 12, starring as Short Round in Indiana Jones and the Temple of Doom. He then played a few roles here and there, but as an adult, he found it difficult to keep working as an actor in the United States. He eventually quit acting and enrolled in a film program at the University of Southern California.

Quan actually worked on a few big names after his graduation, choreographing fighting sequences in X-Men, working as Wong Kar-wai’s assistant on 2046, and more.

This film is his first acting comeback after his child acting career. The man really came back 20 years later and won a Golden Globe—iconic behaviour, if you ask us.

Reminder that we’re not insignificant (well yes, but also no)

Everything Everywhere All at Once has a key message: while it’s true that in the grand scheme of things, we are just a small blip in the vast ocean—oceans, if you include other universes present in the film—that doesn’t mean what we’re doing doesn’t have meaning.

The film touches on a classic philosophical argument, and raises the question “what is the meaning of life?” It causes viewers to ponder this, and brings to light three major schools of thought: nihilism, existentialism, and absurdism.

Existentialism is the belief that the meaning of life is attributed to one’s own personal responsibility. Nihilism denotes that there is no meaning, and it’s pointless to try. Lastly, absurdism poses the argument: “since nothing we do has meaning, we should do everything we can, and that gives our actions meaning.”