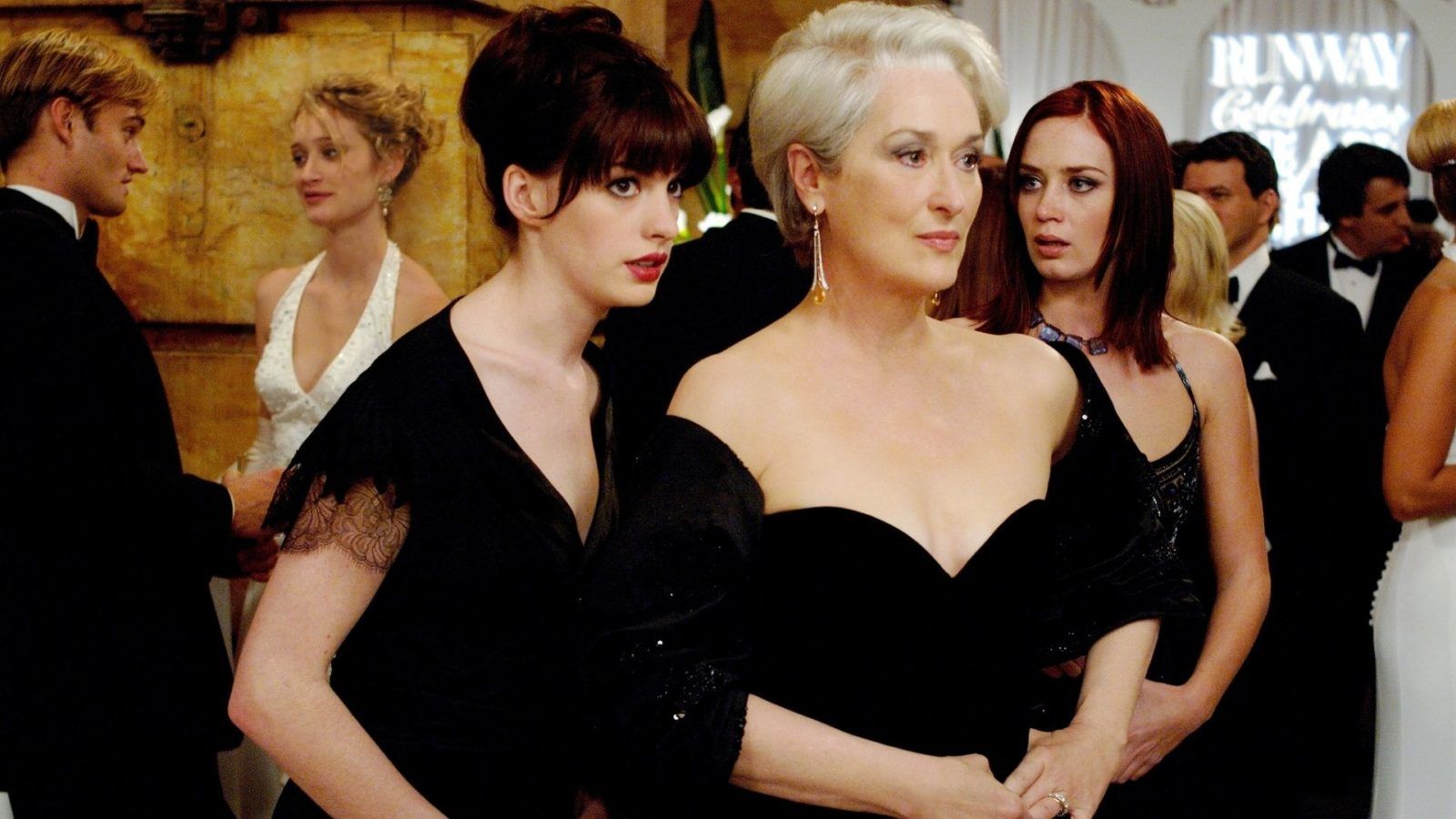 Womanhood is something to be celebrated every day — but 8 March is UNESCO-recognised International Women’s Day, and there’s no better way to mark the occasion than with some films with a female lead.

On International Women’s Day, we remember those who have championed the cause of women’s rights, spread the spirit of equality, thwarted all societal limitations and set an example for generations to come.

Female actors have held an instrumental position in the global film industry; their contribution and talent are irreplaceable. From legendary actors like Meryl Streep, Audrey Hepburn and more, women have portrayed roles that have become immortal on the big screen. Here are some of the best films with a female lead to watch now.

Directed by Phyllida Lloyd, The Iron Lady sees Meryl Streep as the former British prime minister Margaret Thatcher. Doing absolute justice to the role, she shines as an ageing politician who is unable to accept the recent loss of her husband; the vision of him and his dreams haunt her while she executes her political duties.

This film charts Thatcher’s journey from girlhood to womanhood, as she takes charge of the office — a strong female lead indeed. Also stars Richard E Grant and Jim Broadbent in key roles.

Based on the 2003 novel by Lauren Weisberger, The Devil Wears Prada is an American drama with a star-studded cast directed by David Frenkel. Meryl Streep dons the hat of strict boss Miranda Priestly, editor of luxury fashion publication Runway. Anne Hathaway plays the role of her second assistant Andrea Sachs (aka. Andy) and Emily Blunt appears as Miranda’s chief assistant (with the same name).

Andy doesn’t have any idea about haute couture and luxury fashion; she immediately finds herself as a fish-out-of-water in Miranda’s posh office. In an attempt to please her boss, she ends up working late into the night, while Emily, condescends her. The only form of support Andy gets is from art director Nigel (Stanley Tucci). Streep shines as the highly-accomplished and demanding boss who teaches a tough lesson to those who undermine her, while Hathaway puts up a brilliant performance as the new recruit.

Little Women, the highly acclaimed novel by Louisa May Alcott, was released in two volumes in 1868 and 1869 — it continues to be relevant and inspire filmmakers today.

Directed by Greta Gerwig, the 2019 adaptation sees the four March sisters — Meg (Emma Watson), Jo (Saoirse Ronan), Beth (Eliza Scanlen) and Amy (Florence Pugh) — living in genteel poverty in a town in Massachusetts. They stay with their mother (Laura Dern) as their father serves as a military chaplain during the American Civil War. The girls also befriend their next-door neighbour Theodore Lawrence, aka Laurie (Timothée Chalamet), the grandson of a wealthy old man.

Strong-headed tomboy Jo becomes the family’s emotional backbone, contrasting with her beautiful sister Meg. We get a peek into the lives of these sisters and the situations that change around them (including illness), and a glimpse of old Massachusetts come alive with Gerwig’s own modern touch. The strong persona of Jo makes for a vivid character, with brilliant dialogue. A beautiful watch.

This Universal Studios movie is based on the true story of legal and consumer advocate Erin Brockovich, a single mother who took up the cause of safe and clean drinking water for the people of Hinkley, a southern Californian community. Julia Roberts bagged the Oscar for Best Actress for portraying the titular role.

Pacific Gas & Electric (PG&E) set up a power plant in the area. To prevent the machinery from rusting they use a chemical substance that eventually trickles into Hinkley’s water supply. Erin takes it upon herself to file a lawsuit against PG&E and a long, hard battle follows.

The power-packed performance by Roberts and the adept direction of Steven Soderbergh bring out the gravity of the situation. Celebrating the bold spirit of a mother, Erin Brockovich is one movie you must watch on International Women’s Day.

A story of passion, determination and perseverance. 20th Century Studios summarises the plot as, “The incredible untold story of Katherine Jonson (Taraji P Henson), Dorothy Vaughan (Octavia Spencer) and Mary Jackson (Janelle Monae) — brilliant African-American women working at NASA who served as the brains behind the launch into orbit of astronaut John Glenn, a stunning achievement that turned around the space race. The visionary trio crossed all gender and racial lines and inspired generations.”

Directed by Theodore Melfi, the three female leads’ journey to achieving the near-impossible, shattering glass ceilings and breaking away from societal pressures makes the film a beautiful watch.

Reese Witherspoon plays the role of a “typical Californian blonde” — Elle Woods, with couture dresses, finely-manicured hands, a band of fabulous friends and the most-wanted boyfriend on campus (Warner Huntington III played by Matthew Davis). But her life flips when Warner leaves her and enrols at Harvard to pursue law. Elle decides to take matters into her own hands, following him to Harvard to win him back. From there, it looks like a smooth ride but fate has other things in store.

Legally Blonde got a sequel in 2003 and news of a third film is doing the rounds with media reports suggesting Mindy Kailing will co-write the project.

Patriarchy, love, friendship and a yearning for freedom tie the four female leads in this Leena Yadav film.

Taipei-born director and actor Sylvia Chang portrays the many struggles of womanhood and crises in the lighthearted comedy 20 30 40.

The film stars Chang as Lily Zhao, Rene Liu as Xiang Xiang and Angelica Lee as Xiao Jie — in various ages of their lives, with their own set of struggles and issues. The youngest, Xiao Jie, is a 20-year-old woman who has left her home in Malaysia for a pop career in Taipei. Xiang Xiang comes next, in her thirties, as a flight attendant torn between her affair with a married man and a young lover. The oldest, middle-aged Lily Zhao, returns to the dating scene, after divorcing her husband due to his infidelity.

The Call treads on the lines of time travel and horror, featuring two women from different periods; Seo-Yeon (Park Shin-Hye) lives in the present while Young-sook (Jeon Jong-seo) lives in the past, in 1999. Both are connected by a phone call. What follows next is eerie and haunting.

It is enigmatic to watch a horror film with two strong female leads. An ideal recipe for a heart-pumping experience, Chung-Hyun Lee doesn’t disappoint, making this a different kind of film to watch on International Women’s Day.

Kangana Ranaut delivers her best performance as Rani in Queen. A young girl from Delhi, Rani studies Home Science and her head is full of fairytales. She fantasies about getting married to her prince charming Vijay (Rajkummar Rao) but reality hits her, hard, when he rejects her and cancels the wedding just a day before.

She decides to spend some time on herself and goes for her honeymoon in Paris alone. On the trip she meets Vijayalakshmi (Lisa Haydon) and embarks on a crazy journey of self love, self discovery and freedom in this high-grossing and critically-acclaimed Vikas Bahl directorial.

Entertainment Women International Women's Day Film & TV
Trinetra Paul
An ardent foodie, Trinetra seeks every opportunity of travelling and writing. Storytelling and slam poetry are her go-to jam. Her lazying around ideas includes binge watching and whipping up some snacks or searching the next place to visit.
Sign up for our newsletters to have the latest stories delivered straight to your inbox every week.