Home > Culture > Entertainment > ‘The Crown’ to ‘Her Majesty’: TV shows and movies based on the British royal family 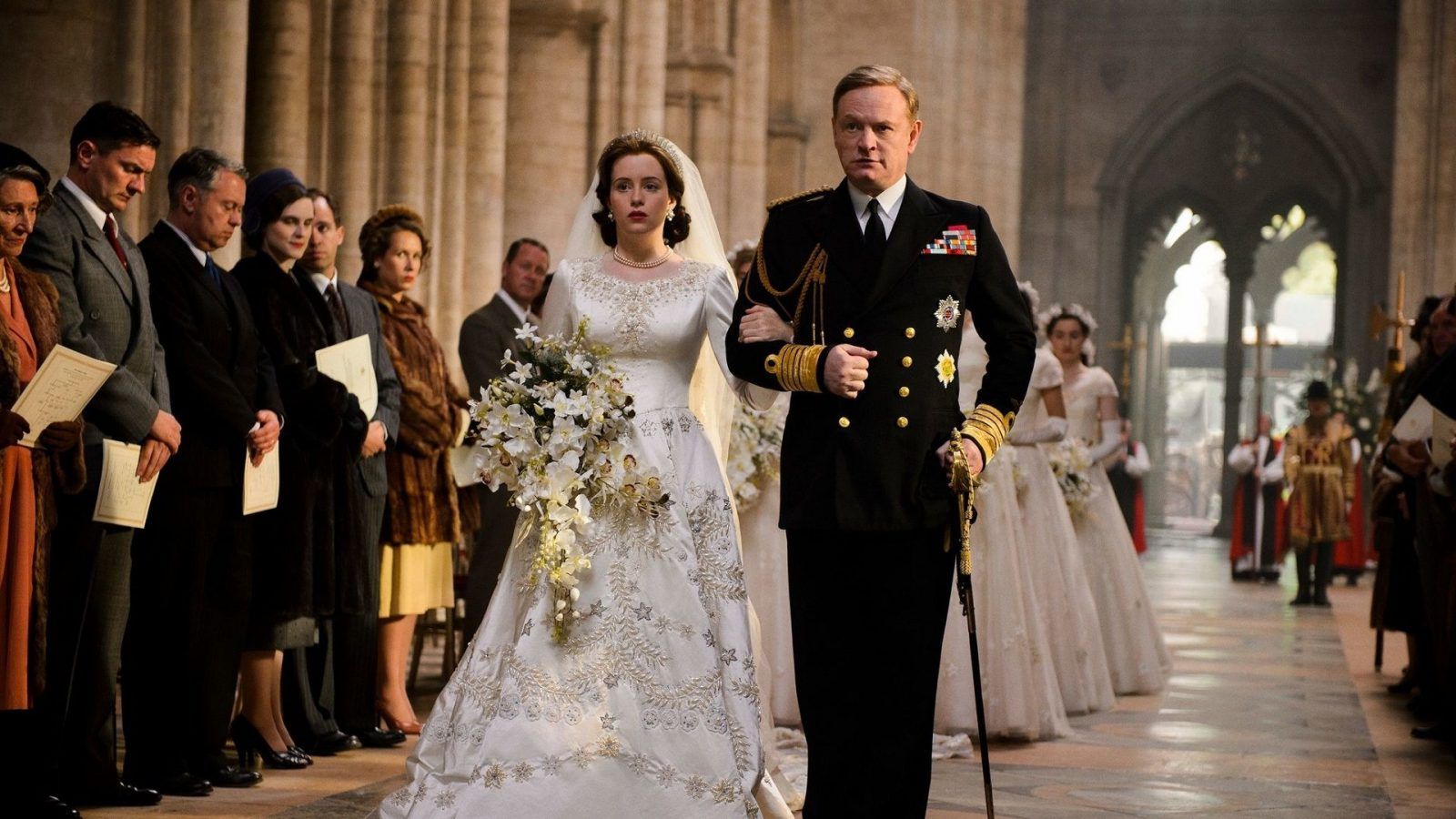 ‘The Crown’ to ‘Her Majesty’: TV shows and movies based on the British royal family

The British royal family has been the subject of numerous movies and TV shows since the 20th century.

The late Queen Elizabeth II was the most prominent member of the royal family who was often depicted on screen. From actors playing the late monarch in cameos in films such as Austin Powers in Goldmember (2002) to farcical versions such as a machine-gun-toting Princess Elizabeth in Royal Faceoff (2006), the Queen has been the subject of everything from parodies to blockbusters.

While many of them are slapstick comedies, there are several fine dramas and gems which shed more light on the real events surrounding the royal family. These include films and shows that have won Oscars for the actors or bagged multiple Emmys.

The current members of the royal family include King Charles III, Prince William, the Prince of Wales, Prince Harry, the Duke of Sussex, their families as well as the siblings of the Sovereign.

Royal family TV shows and movies that are worth watching

Netflix’s The Crown takes a deep dive into the royal family starting from the time when Princess Elizabeth was proclaimed as Queen Elizabeth II (Foy and Colman) following her father’s death. Everything from Elizabeth’s marriage to Philip, Duke of Edinburgh (Smith and Menzies), to several crises in the royal family including the marital troubles between Prince Charles (O’Connor) and Princess Diana (Corrin) are depicted in over four seasons.

The characters are played by multiple cast members as the setting of the series progresses through the decades. For instance, Foy and Colman essay a young and middle-aged Queen Elizabeth II, respectively. Imelda Staunton is set to play a much older Queen Elizabeth II in the upcoming season 5.

Perhaps one of best royal family films, The Queen follows Queen Elizabeth II (Mirren) in the days after Princess Diana’s death. The Queen is grappling with diverse opinions around how to respond to the tragedy that has hit the royal family, while the public pressure for a show of mourning grows.

The film premiered at the Venice Film Festival in 2006 before its wide release. It garnered worldwide accolades from both critics and fans. Mirren won the Academy Award, Golden Globe and BAFTA for best actress for her performance. Following the film’s release, Mirren was invited by Queen Elizabeth II herself to dine at Buckingham Palace, but the actor had to decline the invite because of work engagements.

The film’s screenplay was done by Peter Morgan, who is also the writer of The Crown.

Spencer is among one of the finest royal family movies and shows. Princess Diana (Stewart) is struggling with mental-health issues because of intense pressure from the royal family to conform and troubles in her marriage with Prince Charles (Farthing). Things come to a head when Diana visits the family during Christmas at Sandringham estate in Norfolk, where she takes the decision to end her marriage.

The film received mixed reviews, but Stewart gave her career best performance and was nominated for an Oscar for best actress.

A Royal Night Out

A Royal Night Out is a comedy-drama which is based on a real-life incident in the life of Queen Elizabeth II when she was still an heir to the throne. The partly fictional story is set in 1945 on VE Day, or the day when Allied nations celebrated the victory over Axis powers. Princess Elizabeth (Gadon) and her sister Princess Margaret (Powley) sneak out of the royal palace and spend a night incognito on the streets of London, witnessing the jubilant celebrations in person.

Another gem from the many royal family movies and shows, this story is based on an anecdote that Queen Elizabeth II herself shared in a BBC broadcast over 30 years after the end of World War II.

“I remember lines of unknown people linking arms and walking down Whitehall, all of us just swept along on a tide of happiness and relief,” the Queen recalled as she revealed what she saw after King George VI and Elizabeth (later Queen Elizabeth, The Queen Mother) permitted the two princesses to join the celebrations.

Hailed as one of the greatest royal family films to have hit the screens, The King’s Speech revolves around King George VI (Firth). When his brother, King Edward VIII (Pearce), abdicates and he must take the throne, Elizabeth (Carter), approaches an Australian speech therapist, Lionel Logue (Rush), known for his odd but effective ways in treating people with speech issues.

King George VI and Elizabeth were the parents of Queen Elizabeth II, who is portrayed as a young girl in The King’s Speech by Wilson. The film was a major box office success and also received wide praise from critics. It was nominated for 12 Academy Awards and won four, including Best Picture and Best Actor (for Firth).

The TV movie is about Prince Albert (Wilby) and Elizabeth Bowes-Lyon (Aubrey), later King George VI and Queen Elizabeth, as they marry and lead a private life in the shadow of the Prince’s father, King George V (Bates) and mother, Queen Mary (Atkins). But following the death of the king and the abdication of King Edward VIII, they are immediately thrust into a situation where the people want to see a leading figure in their king as World War II looms.

The TV miniseries revolves around the tumultuous times when King Edward VIII decided to abdicate in 1936, to be able to marry twice-divorced American Wallis Simpson (Harris).

The seven-episode series won several BAFTA TV awards including Best Drama Series/Serial. Following its release in the US in 1980, it won the Primetime Emmy Award for Outstanding Limited Series.

Set in the 1950s, the story is about Elizabeth (Andrews) — a 13-year-old girl who lives in a small but charming town of Wakefield in New Zealand. She excitedly writes letters to Queen Elizabeth II (Rachel E. Wallis) requesting a visit of the British Sovereign to her town. Preparations for a grand welcome begin when her town learns that the Queen is actually going to visit the place. But a new reality dawns upon Elizabeth when she meets the elderly Māori named Hira (Haughton), who tells her of what the British did to the Māori people.

Film critic Roger Ebert observed in his review that when the real Queen Elizabeth II was on tour of New Zealand in 1953, she visited Cambridge — a hamlet which was presented as Middleton in the film.

The Queen and I

When a new republican Prime Minister brings an end to the monarchy, Queen Elizabeth II (Bond) and the rest of the royal family members find themselves in a situation where they have to live in a derelict council estate. Hilarity ensues as the family grapples with its rather helpless situation.

The satirical TV movie is based on Sue Townsend’s novel and play of the same name. To film fans, Bond is best known for playing Miss Moneypenny in the James Bond films starring Pierce Brosnan as the MI6 agent.

The film is one of the earliest known to have featured Queen Elizabeth II, albeit in the form of stock footage from her real-life visit to Hong Kong in 1975.

This flick is one of a kind from the list of royal family movies and shows we have. The story revolves around a group of mercenaries led by an Irish Republican Army (IRA) terrorist George Morgan (Lazenby), who wants to assassinate the Queen. The police get a wind of it through local bar girl Jenny (Tanny) and then a cat-and-mouse game ensues.

The film was not well received upon release, with criticisms for its slow-moving plot and action choreography. Moreover, Lazenby, who is best known for On Her Majesty’s Secret Service (1969) — his only film as James Bond, was far from his prime.

The Naked Gun: From the Files of Police Squad!

The American crime comedy is another one of those movies which parodies a member of the royal family. A bumbling police detective, Frank Drebin (Nielsen), has to foil a major conspiracy by an evil business tycoon Vincent Ludwig (Ricardo Montalban) which involves a plot to kill Queen Elizabeth II (Charles).

the crown queen elizabeth ii spencer King Charles III
Manas Sen Gupta
Manas enjoys reading detective fiction and writing about anything that interests him. When not doing either of the two, he checks Instagram for the latest posts by travellers. Winter is his favourite season and he can happily eat a bowl of noodles any time of the day.
Travel Culture Entertainment Food
Sign up for our newsletters to have the latest stories delivered straight to your inbox every week.

‘The Black Phone’ To ‘The Sadness’: 11 Of The Best Horror Movies Released In 2022 Till Now

Everything we know about ‘Emily in Paris’ season 3