Free-flow deals, drag shows, exclusive cocktails and bumping live DJ acts, not to mention all the incredible costumes to admire: Halloween in Hong Kong is one of the biggest nights out, and you won’t want to miss out on all the devilish debauchery. Starting from Halloween weekend on the 26 October through to All Hallows’Eve itself on 31 October, here are the best events to party the night away. 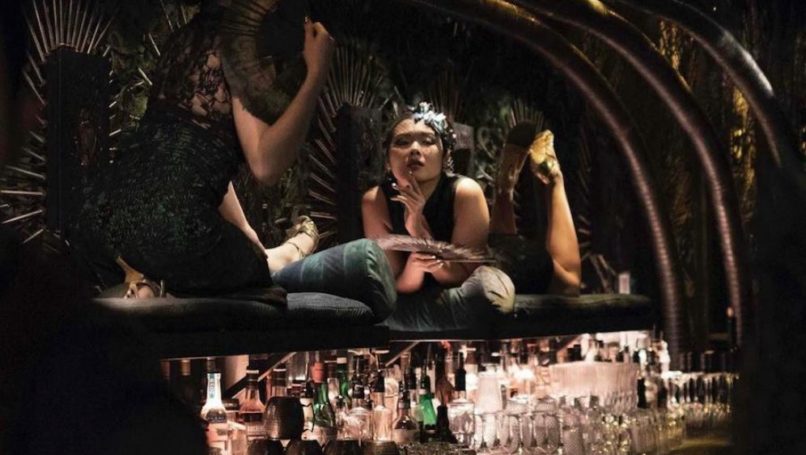 If you’re down for some spectacle and madness this Halloween, Ophelia is your best bet. Gear up for not just one but a string of Halloween blowouts this October: the first event on 23 October, Scream Queens: Halloween Drag Extravaganza will leave you gagging with Miss Midlevels’ wit and antics; while Mayhem at the Madhouse on 27 October brings you a night of lunacy with Ophelia’s signature entertainment programme. It all rounds out with the final party, The Night Circus on Halloween proper (register here); marketed as “the final curtain call before the circus leaves town,” the night features vaudeville performances, live music, gorgeous and demented costumes alike and plenty of cocktails. Channel your biggest baddie behind bars for this Halloween bash and head to Tai Kwun’s former prison cells for this party hosted by the Behind crew. It’s non-ticketed, which is perfect for last-minute party ghouls wandering the city on Halloween weekend. Decked out for 10 days from 22 October–1 November, you’ll also want to stop by for a winning selfie on Instagram for a chance to win a magnum of Perrier-Jouet. Contact ask@behindbars.hk for cell reservations, and see here for more information. 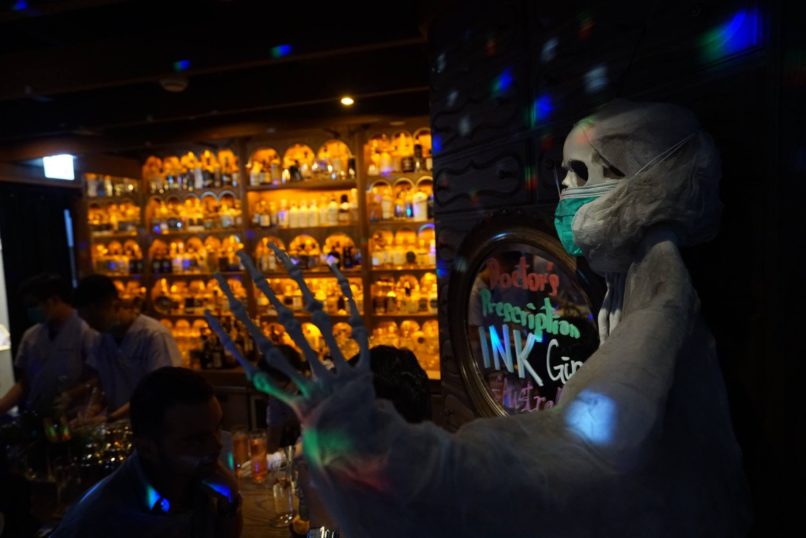 Put on your lab coats and tighten those straitjackets: Dr. Fern’s will be starting early come Halloween weekend, curing all debauched souls with Halloween-themed cocktails and test tube shots at the clinic. Send a direct message to the Dr. Fern’s Facebook page to obtain a secret code, which will get you an exclusive Halloween shot. More info here. Any party that erupts into a rousing chorus of Bohemian Rhapsody sounds like a great one in our books. Perhaps particularly apt with Freddie Mercury’s biopic releasing in theatres this month, this Queen-themed Halloween soiree is surely topical: Warm up your vocals, don your best glam rock attire and get ready for a fantastically boozy night out. More info here. 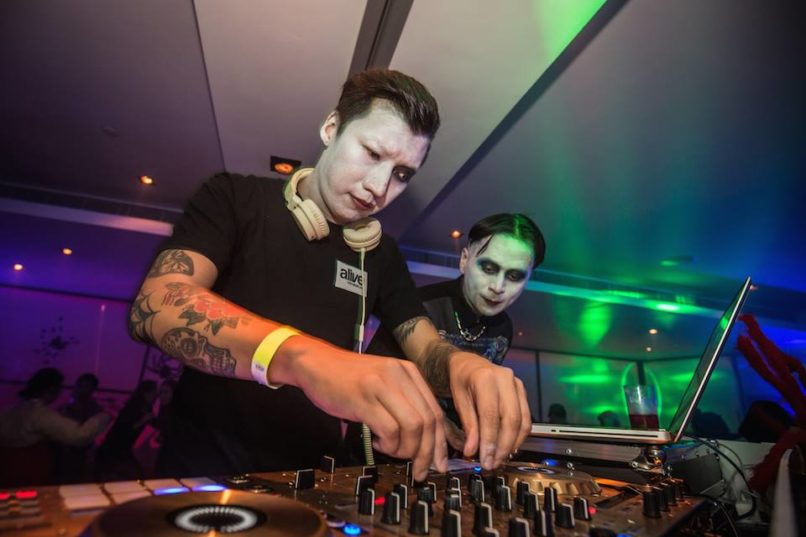 Price: HK$500 from Boom, HK$600 at the door; includes one complimentary drink

The quintessential Hong Kong Halloween Party is Dead Not Alive’s yearly Halloween extravaganza, gathering celebrity guests, a star-studded DJ lineup and throngs of costumed Hongkongers each year. This year the party will be held in a mystery location, and early ticket holders will be able to get free transportation from Central. VIP tables have already sold out, so you’ll want to grab your tickets pronto. More details here. Halloween is a chance unlike any other to get dolled up for the occasion, and this terrific burlesque affair ticks all the boxes for a scary girl’s night out. Hosted by drag royalty Genie the Queenie, a ticket gets you four hours’ free-flow drinks, and the scariest, wittiest and sexiest costumes get to win prizes (a way to hack all three categories? Go as Scary Spice). More info here. 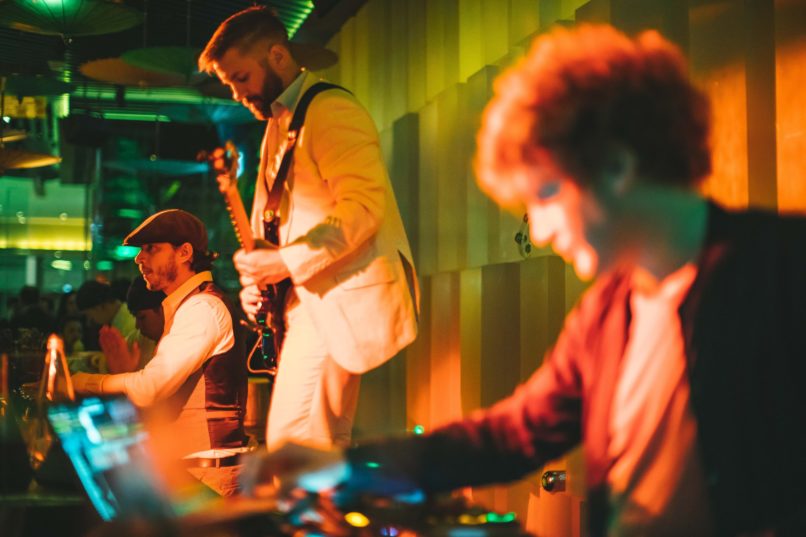 Zuma’s celebrated Yashoku night brunches get a twist in honour of Halloween. With free-flowing Veuve Clicquot, wines, and Zuma’s signature cocktails, not to mention sharing plates of their delicious sushi and sticks — you’re sure to be amply watered and fed before boogieing down to spooky tunes by Zuma Dubai’s resident DJ Adrien Callier and live percussionist Benjy. Table reservations available from 10:30pm. Recently opened Ichu Peru is hosting its first gruesome Halloween bash. Witness the first “ritual sacrifice” with plenty of food and drink offerings, a live fire performance and get glammed up (and spooked up) with the special effects makeup artist on site. Those still reeling from the incredible looks from this year’s religion-themed Met Gala will be ecstatic to dress up to this slice of debauchery at Duddell’s. Think opulent evening wear, angel and devil wings, divine details and celestial forms. International DJ Will Power will be spinning the stylish tunes to keep you moving all night. 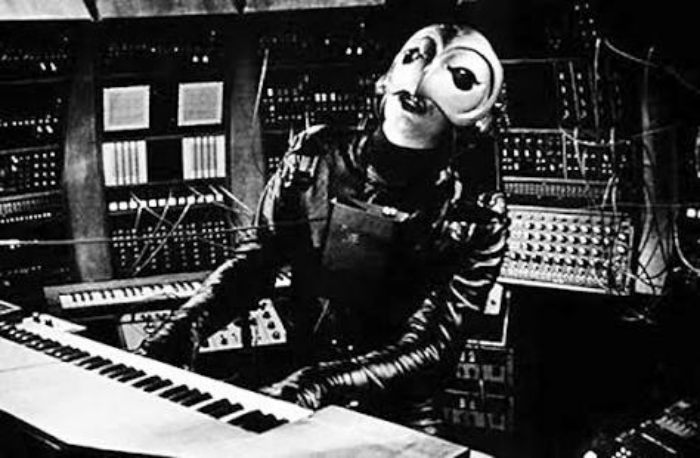 Wicked tunes, “spooktacular” drinks (we had to), and kickass vibes make for the most thrilling Halloween dance party over at Potato Head. If you’re a fan of vinyl disco with a splash of eerie soundtracks, this one’s for you.

If the scariest notion of Halloween is a lack of vino, then this is the party for you. At this event hosted by Meiburg Wine Media, you’ll get to swirl and taste a selection of over 200 global wines, all available for self-pouring at this relaxed wine geek heaven. 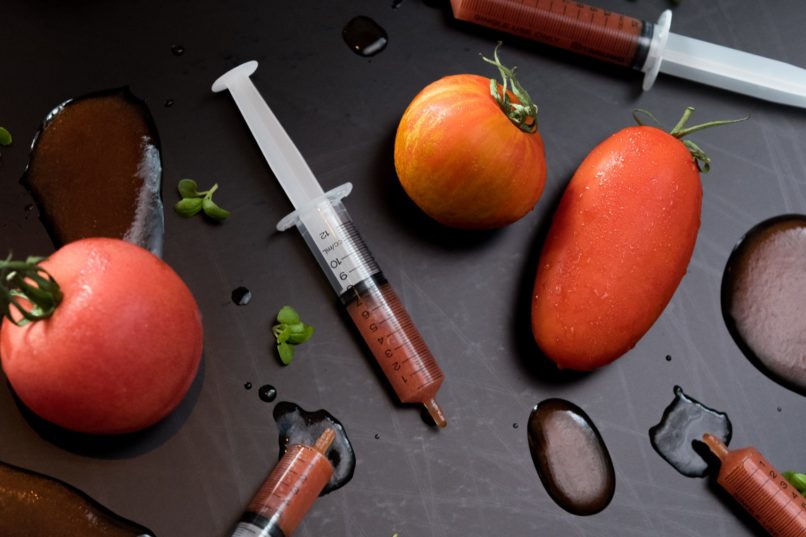 Head to Back Bar at Ham & Sherry for a laid back Halloween ‘do: Expect hip hop mashups, gory cocktails (including Bloody Mary syringes) and complimentary bar snacks including ‘blood’ croquettes. Don your scariest costume for a chance to win a bottle of aged rum; the next runner up also gets a bottle of Mette.

Set to Shine: These are the 5 athletes to watch at Beijing 2022 Olympics