Chinese Lantern Festival: Know all about the celebrations in Hong Kong

The Chinese Lantern Festival is a sight to behold with extravagant displays. Streets are filled with colourful lanterns, often accompanied by a riddle. The correct answer earns the solver a gift. The festival is also the time to enjoy dragon and lion dances and stunning fireworks and binge on a traditional rice ball dessert called ‘tangyuan’. But did you ever wonder what the significance of the Chinese Lantern Festival is? Know everything about its origin, significance, and celebrations in Hong Kong. 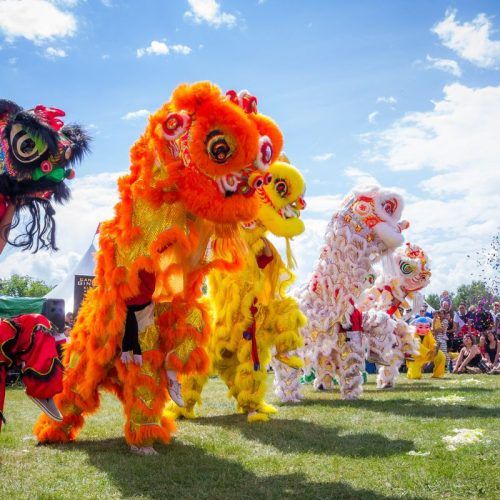 Chinese Lantern Festival Origin: Where it all started

The festival is commonly believed to have started 2000 years ago during the long reign of the Han Dynasty (202 BCE-220 CE). While there are many anecdotes about its origin, take a look at the two most popular ones that have echoed through generations.

The first tale dates back to the time of Emperor Ming of Han (58-75 CE). At this time, Buddhism was at the peak of popularity in China, with its customs and traditions coming to light. Emperor Hanmingdi was an advocate of Buddhism. He observed the monks lighting lanterns in temples in honour of Buddha on the 15th day of the first lunar month. He then ordered holy establishments, royal places and households to observe the ritual.

2. Story 2: Jade Emperor and a village under threat

Some believe that Jade Emperor sought revenge on villagers who killed his favourite crane. The emperor decided to burn down the perpetrators’ village on the 15th day of the first lunar month, but destiny had other plans. After learning about his evil plan, the monarch’s daughter felt remorseful and decided to warn the villagers. Eventually, they devised a plan to trick the emperor and give him the impression that the village was already under fire.

They hung red lanterns, lit fires across the village and set off fireworks to create the charade. Their plan was successful and saved the village folk. Since then, the tradition of hanging lanterns has continued on what we now know as the Chinese Lantern Festival.

The festival marks the end of the Chinese New Year and welcomes spring. The lanterns exemplify people bidding adieu to the last year and welcoming the new phase with good luck and fortune. The festival also represents the union of the family.

The sweet, sticky rice balls called ‘yuanxiao’ or ‘tangyuan’ prepared on the occasion symbolise wholeness and unity in the household. Further, the dragon and lion dances are believed to shun away negative spirits and energies.

How is the Lantern Festival celebrated in Hong Kong?

Lighting the lanterns is a major activity and you’ll find them popping outside most households, shopping complexes, streets and parks. People pray for a prosperous future and wish the best for their loved ones.

Two of the major Lantern Festival attractions in Hong Kong take place in Tsim Sha Tsui. One at the Hong Kong Cultural Centre Piazza and the other at the West Kowloon Waterfront Promenade, both of which are sponsored by the Hong Kong Leisure and Cultural Services Department.

The lantern displays go on for weeks while the Lantern Carnival happens on the 15th day of the new lunar year. Interesting lantern making workshops and cultural exhibitions also add to the celebrations.

The display at the Hong Kong Cultural Centre (HKCC) Piazza, Tsim Sha Tsui, is one of the most popular events in town. This year, you’ll witness the ‘Luck Bringing Rabbit’ display. Admission is free for all.

The lantern displays will happen at the North District Park this year. Admission is free for all. The Youth Night and Carnival Night won’t be available this year.

The lantern displays will take place at Tsuen Wan Park. Admission is free for all. The Youth Night and Carnival Night won’t take place this year.

The longest exhibition takes place at Tsim Sha Tsui Waterfront. The specially curated lanterns are set up near the Clock Tower or the Hong Kong Space Museum.  The 2023 lantern theme is ‘The Luck-Bringing Rabbit – Lanterns to Celebrate the New Year’.

For further information about the events, visit the official site of the Hong Kong Leisure and Cultural Services Department.

From Lollapalooza to Knotfest: Groove at these music festivals in 2023

BLACKPINK to Westlife, the best concerts coming to Hong Kong in 2023

Where to buy a dazzling Christmas tree in Hong Kong