Culture
What to do in Hong Kong: 1–15 February 2019
Share this article
Next article

This fortnight is sandwiched by Lunar New Year celebrations and Valentine’s Day, making for one big red-hued month of love, luck and good fortune (by that, we mean all the lai see money involved). Scroll through for the best events to fill your calendar between family commitments to mustering up the courage to ask your date out for the best, cheesiest V-day plans ever.

When: 15-17 February
Price: From HK$230 from Longines Masters; EEM Society VIP packages available
The hottest ticket in the universe of equestrian sports arrives in Hong Kong this February. As the midway stop between Paris and New York, the EEM Longines Masters is considered one of the most prestigious equestrian events in the world, bringing together enthusiasts of showjumping, dressage as well as luxury lifestyle and gastronomy all under one roof.
AsiaWorld-Expo, Chek Lap Kok, Hong Kong

When: 27 February
Price: HK$470 from Ticketflap
Electronic soul/pop duo Honne is heading to Hong Kong for a rare stop during their Asian tour this February at Macpherson Stadium. From their early smooth hits to their exceedingly danceable sophomore LP “Love Me/Love Me Not” released just last year, it’s sure to be a blast.
Macpherson Stadium, 38 Nelson Street, Mong Kok, Hong Kong

When: 3 March
Price: HK$688 from Cotai Ticketing
Triple-time Grammy winner and Billboard chart topper Maroon 5 is undoubtedly one of the most anticipated acts to see live, and they’ve finally made their way this side of Asia to the delight of their Hong Kong and Macau fans. Belt along to the favourites from their latest album Red Pill Blues, as well as all the throwback classics from their debut masterpiece Songs About Jane.
Cotai Arena, The Venetian Macao, Estrada da Baia de Nossa Senhora da Esperança, Macau Whether you love catching all the decorations or are one to enjoy the atmosphere at the countless Lunar New Year flower markets around town, kicking off the Year of the Pig wouldn’t be the same without the annual Chinese New Year fireworks, taking place at 8pm — be sure to head to the harbourfront early to nab the perfect vantage point if you’re looking to watch live. For those looking for a unique spot to catch the pyrotechnics, the Ocean Terminal Roof Top Car Park is open to a select number of the public: to redeem an admission ticket, just spend HK$1,500 or more at Harbour City (a maximum of two outlets and each transaction exceeding HK$200) and add on a HK$30 donation. Be sure to redeem your ticket before 6pm on the day. 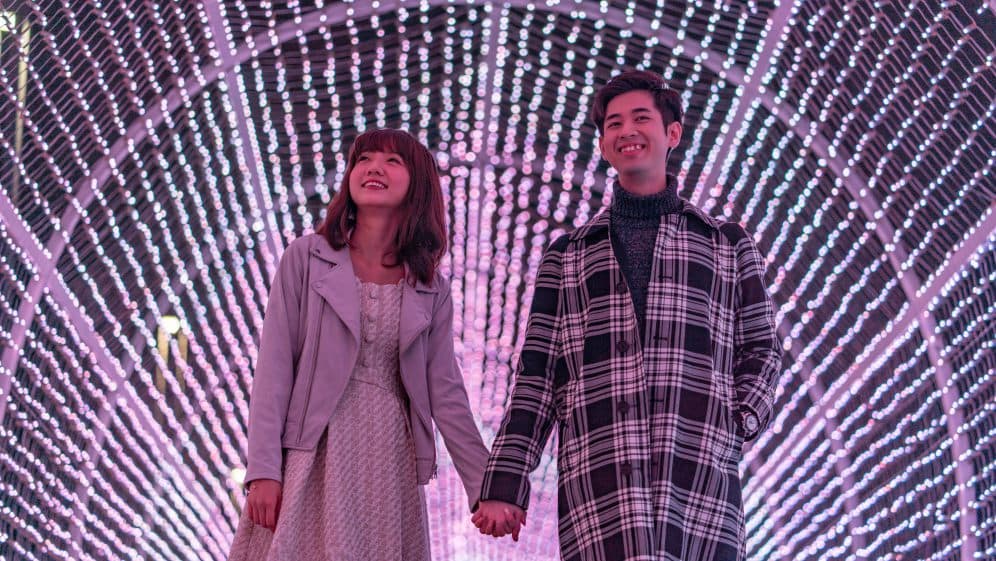 Beyond the Chinese New Year fireworks lighting up the sky, those who love basking in the lights of the city will want to head to Central Harbourfront, which plays host to 15 new light art installations inspired by love and romance — a fresh addition to the ongoing Hong Kong Pulse Light Festival launched last November. The pieces are all created by artists from Hong Kong and abroad, some of which are activated by viewer interaction. For instance, the “Hello, Stranger” is 60 seconds of LED lighting and music activated by the gaze of two individuals. There’s also a pink light tunnel in Tamar Park, making for a stunning backdrop for a romantic photo op. 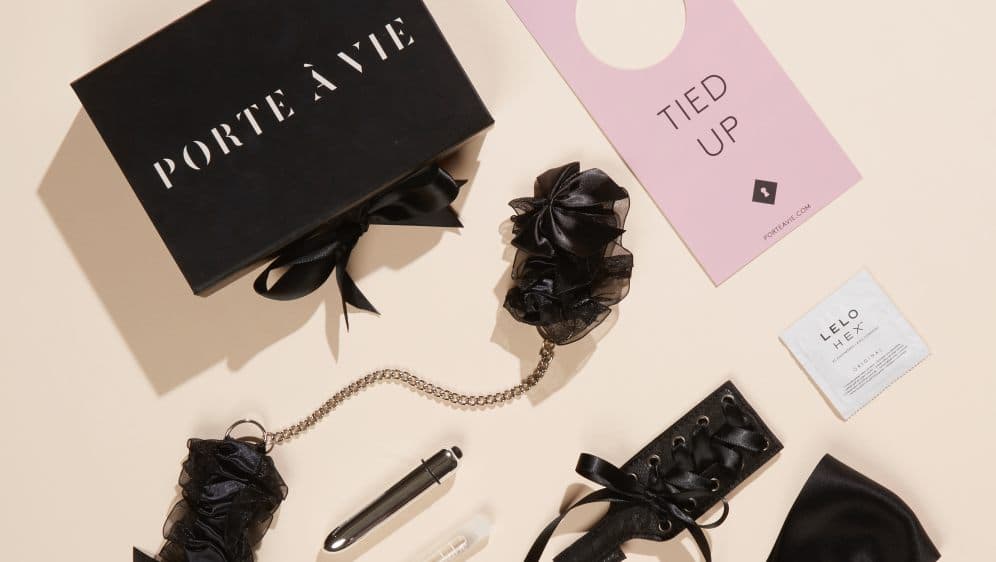 Looking to plan something saucy and unusual for your SO this Valentine’s Day? A staycation for uninterrupted “us-time” is always a much appreciated treat, but Ovolo Hotels’ new Ovolove package (from HK$2,515) is sure to turn the heat up a notch. Partnering with luxury Australian intimates brand Porte à Vie, the package includes a discreet black box of intimate goodies — ranging from vegan-friendly condoms to silk ties and handcuffs, and even a ten-speed silver bullet vibe. As usual, the package also includes Ovolo’s best-loved complimentary inclusions, such as breakfast, minibar, happy hour and more. Available at any Ovolo Hotel in Australia and Hong Kong on 14 February only. 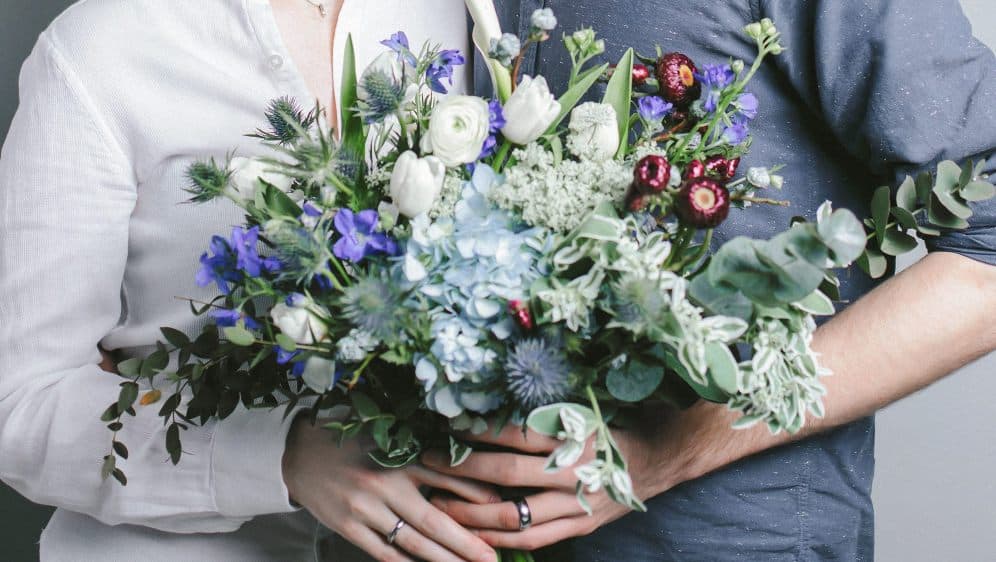 4
Floristry By Art of Living: “Your Own Floral Jamming” Pop-up

Why order a soulless bouquet for your lady when you can make your own ahead of Valentine’s Day? Hong Kong florist Floristry by Art of Living has partnered up with Sergio Rossi to host a floral workshop at Harbour City, teaching guests to make their own custom bouquet or arrangement. With any purchase at the pop-up, participants just need to tack on HK$380 for a one-on-one session with an in-house florist, followed by a guided meditation — a much-needed respite in this time of the year filled with commitments and never-ending errands! Four styles of romantic, literature-inspired bouquets are also available for sale. 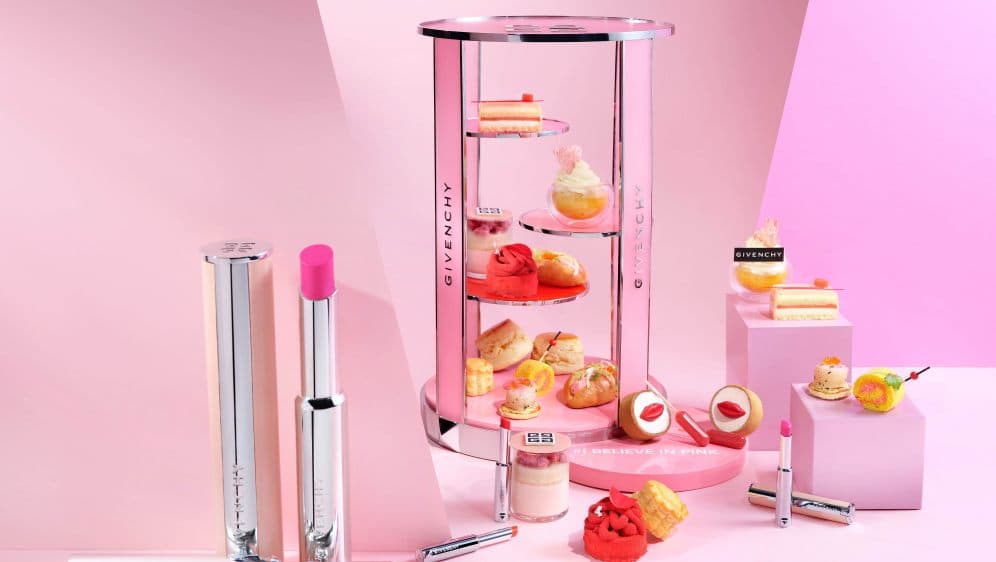 We barely need an excuse to crave The Ritz-Carlton Hong Kong’s delicious afternoon tea sets at Cafe 103, but for those still dazzled by the shade of millennial pink, this collaborative menu is definitely one to book. Promoting Givenchy Beauty’s latest release, Le Rose Perfecto lip balm collection, the I Believe in Pink afternoon tea (HK$398 per set) is inspired by the various pink and rose hues of the eight brand new shades. From a raspberry chocolate delight to a pink guava cream cake — and of course, mouthwatering scones and savoury bites — the set showcases the best of Ritz’s expertise in patisserie. Customers will also be able to redeem a mini Le Rose Perfecto lipstick with every purchase of an afternoon tea set. Order the tea set on Valentine’s Day, and guests will also be gifted a limited edition Givenchy mug. 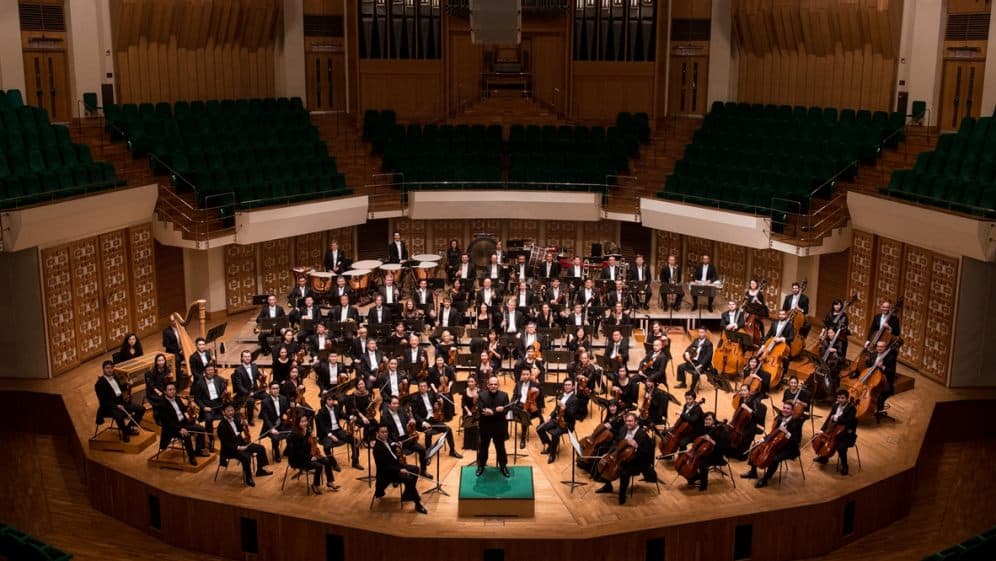 The Hong Kong Philharmonic presents an evening of curated gems paying homage to the late David Bowie, headlined with the Asian première of Philip Glass’ Heroes, a symphony written as tribute to the superstar. The programme rounds out with cinematic delights including the score from There Will Be Blood by Radiohead’s Jonny Greenwood, to Steve Reich’s Three Movements, used in The Hunger Games, to Lachrimae by Bryce Dessner, an atmospheric piece that the audience will remember from The Revenant. 7
Shakespeare in the Park: A Midsummer Night’s Dream

“The course of true love never did run smooth,” as they say. If you’re stuck in a wave of post Valentine’s Day blues, head for a bout of heartache-curing comedy with none other than Shakespeare’s best-loved madcap adventure, A Midsummer Night’s Dream. It’s performed by the Hong Kong Shakespeare Performance Association in the heart of Hong Kong Park, under the stars — just as the bard intended. 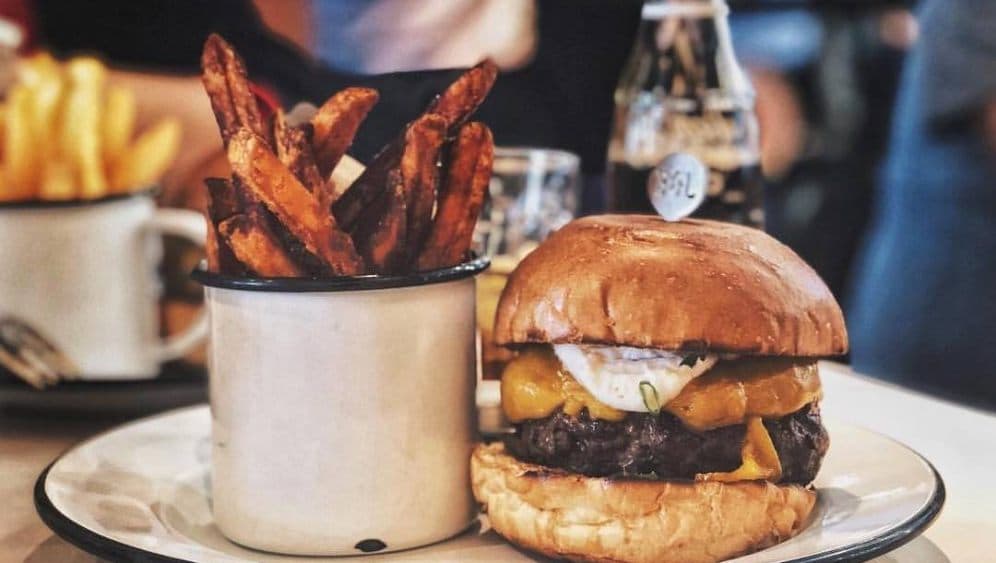 Nothing like a good old fashioned pub quiz to get the romance going: Bring your V-day beau to this special 80s Valentine’s edition quiz at Beef & Liberty ahead of the cheesy events on Valentine’s Day proper. It’s Happy Hour drink prices all night to wash down B&L’s beloved burgers, desserts and snacks, in addition to raffle prizes from Moonzen Brewery. 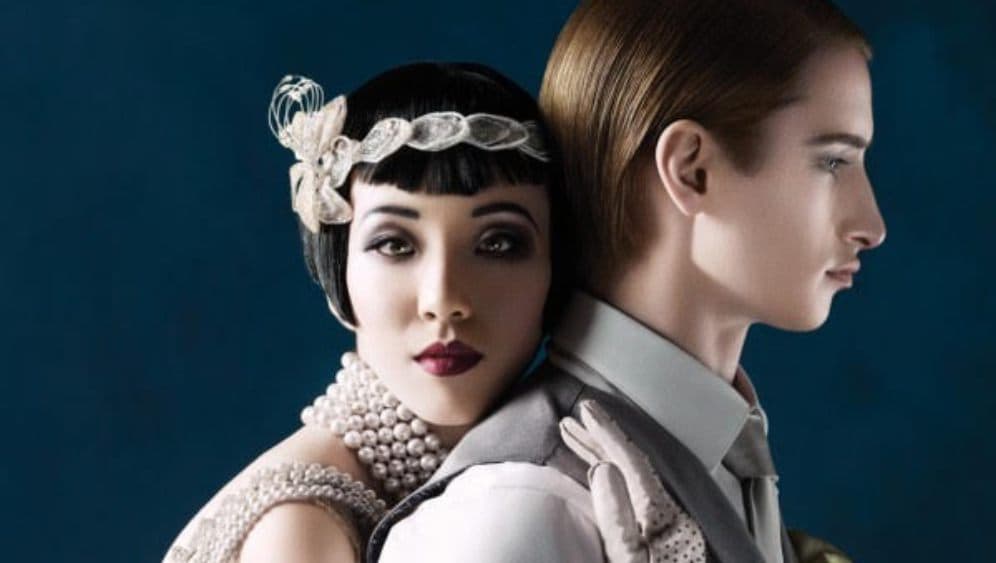 Getting us into the romantic spirit for February is the epic, timeless tale of shining wealth, love and obsession set in the Roaring Twenties: the Asian premiere of The Great Gatsby by Artistic Director Septime Webre. Expect a dazzling new masterpiece with live jazz and blues accompaniment and new sets and costumes by Academy Award winner Tim Yip, of Crouching Tiger, Hidden Dragon fame. 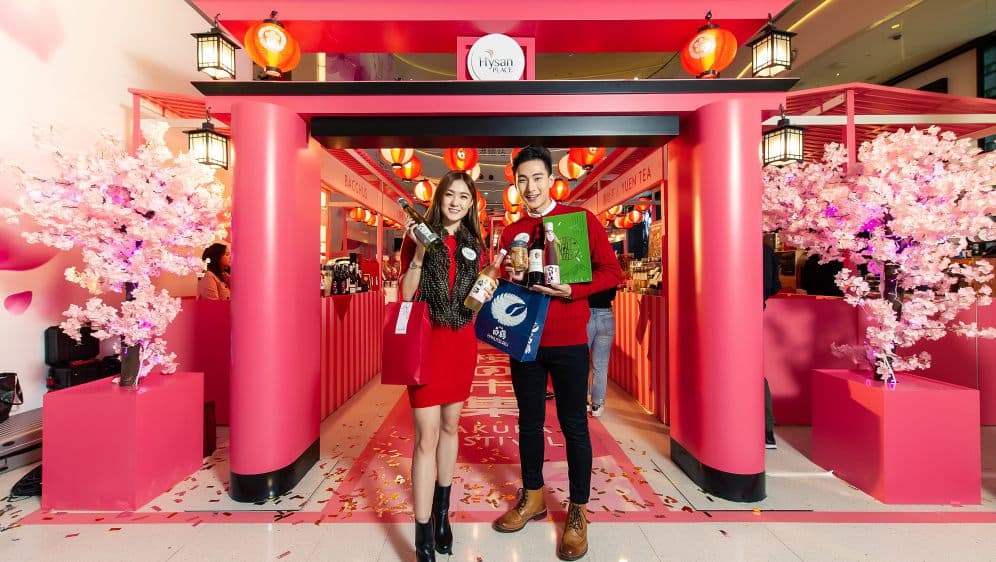 While sakura blossoms are still a ways away from blooming in prime locations in Japan and South Korea, Lee Gardens has transformed into a stunning pink sea of luck-bringing blooms, perfect for shutterbugs and IG fiends. Not only that, the avenue is also hosting a bustling Chinese New Year market, where you’ll find unique Hong Kong- and Japan-made gourmet items, perfect for last-minute CNY gifting. Each merchant will also offer eight Lucky Bags daily — each priced at HK$8 for a selection of wares valued at or above HK$100.