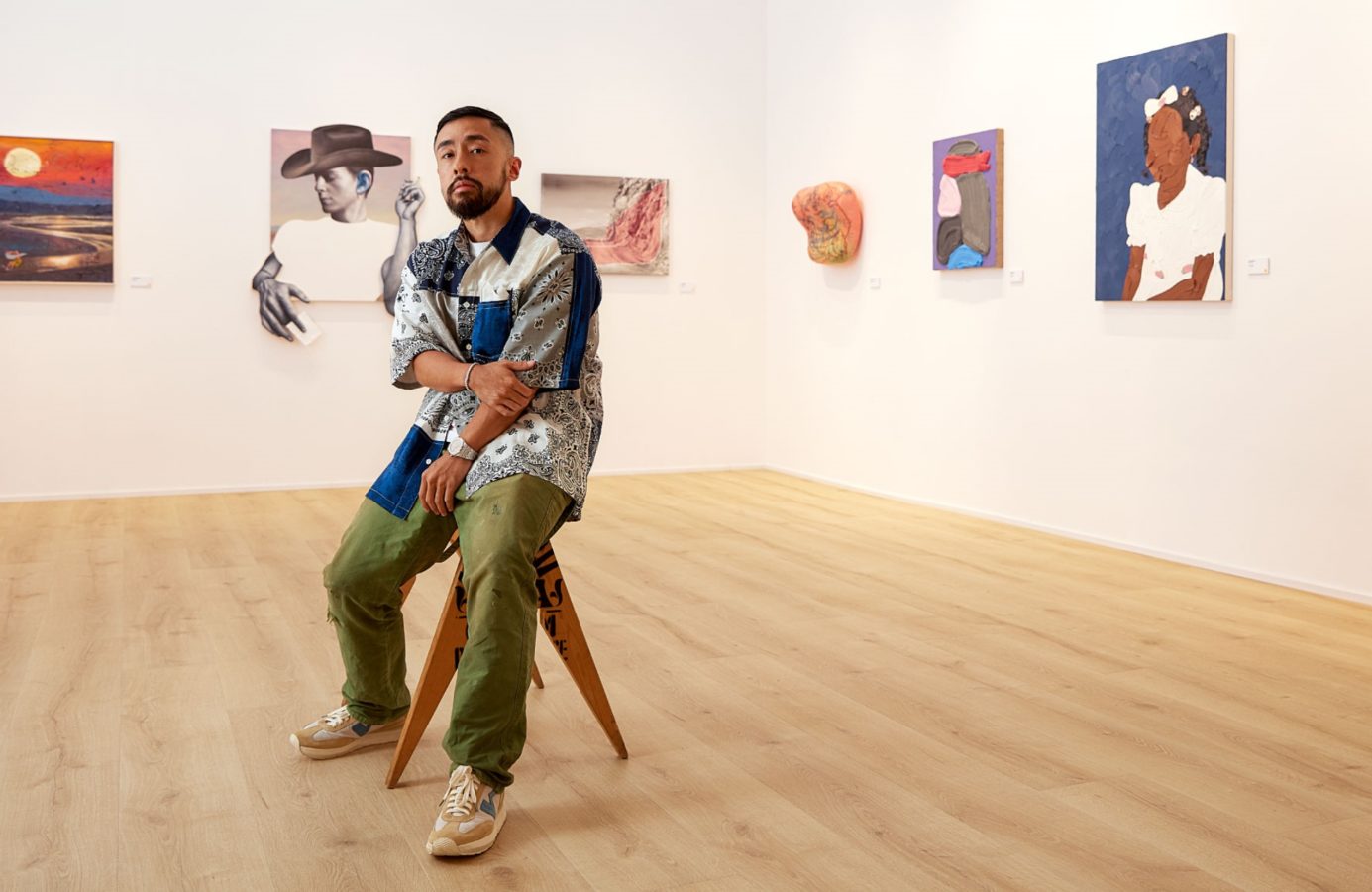 Kevin Poon: Contemporary art through the eyes of an insider

Culture
Kevin Poon: Contemporary art through the eyes of an insider
Share this article
Next article

If Kevin Poon has had an exhausting month, I’m at pains to notice. Despite the rigours of two commercial art fairs and what seems like a new exhibition opening every month, the éminence grise of Hong Kong tastemakers appears sharp and affable when we rendezvous for our June profile inside the clean white void of Woaw Central — his eponymous gallery’s latest outpost, perched within earshot of the Landmark commercial complex.

Until mid-June, the gallery presented Shape of An Image: the second group show held at this Central location, in collaboration with Croatian art writer Sasha Bogojev (an erstwhile collaborator of Poon’s). Against a backdrop of canvasses — all reportedly transcending the innate flatness of painting to achieve “three-dimensional sculptural renderings” — Poon speaks about the genesis of this show and gives his own takes on the state of the art industry in Asia in 2021.

Let’s start right at the beginning: how did you originally begin your art collecting journey?

When I was coming up in the late 1990s and early 2000s, many of my peers were artists. So, I think it was only natural that I’d gradually become curious about their work. As someone with a background in street culture, my initial point of interest was graffiti. During the same era, vinyl toys and figurines were also becoming increasingly collectible — thanks to prominent exponents of those objects like Eric So and Michael Lau.

Graffiti, vinyl toys, streetwear — those were the works that people were getting seriously into when I first started collecting. And over time, my interest in those grew to encompass what we now think of as contemporary art.

You’ve been collecting in the contemporary art space for about 15 years, give or take. What are some of the biggest cultural shifts you’ve observed within that period?

Firstly, I don’t know if there’s one singular all-consuming ‘shift’ per se — change is constantly happening in the art world, a lot of it simultaneous. Of course, as of right now, the Coronavirus pandemic has accelerated the massive pivot we were already seeing toward digitisation. One aspect of that which people are constantly talking about is non-fungible tokens (‘NFT’). The fact artists can use blockchain to monetise their work is certainly a big topic of conversation.

At the same time, we’re seeing continued growth and interest in the Asian market — which makes the timing of this new opening pretty fortunate — particularly from a millennial audience. That, for me, is the most interesting development, and as I said, runs parallel to the wider move toward digital: increasingly, people are willing to see artists’ shows and work without being physically present.

How has the identity and taste of the ‘typical’ Asian collector changed since you first came into the industry?

I still think that the vast majority are in the nascent phases of understanding. Most new collectors (especially in Asia) count on their peers to give them direction. I don’t necessarily think that’s good or bad — it’s just the state of things in the region right now.

“Influential forces in art nowadays might not even have a face: maybe it’s a mere Instagram page or some similar sort of digital presence…”

What I will say is that the younger generation learns extremely fast — even more so when they’re interested in a particular artist or medium. That passion gives us a good discussion point, and is often a catalyst for helping clients to curate what they like, or indeed, expose them to new works we think they’d enjoy.

You’ve recently launched a second exhibition here at WOAW Gallery in Central, entitled Shape of An Image. What can you tell us about this particular group show?

The process of putting it together has been quite interesting. If you look at the works we’ve selected, they’re all about brushwork and deconstructing boundaries traditionally associated with artistic depiction of shapes. That’s why the work of somebody like Jose Lerma — he utilises paint in a way that’s more akin to sculpture — is something you have to see up-close.

“When considering any particular artist’s work, we have to be captivated by it — does it come from a ‘pure’ place?”

I’d say all of the artists that we put into this show are sensitive to the fact they’re working in three dimensions. You can’t fully experience these kinds of painters in a PDF, which is what attracted us to them for this particular kind of show in the first place.

Were there any particular relationships with the artists WOAW has selected that you’d say inspired the underlying theme of this show?

Friedrich Kunath is one of me and my wife’s all-time favourite artists — we visited his studio in LA prior to the pandemic. Having been supporters of his for a little while, getting the opportunity to incorporate him into Shape of an Image was a personal pleasure for us.

On top of that, Chloe Chiasson’s reputation in mixed media painting is something we wanted to highlight in the show. I like the ‘3D-ness’ of it: the way her work escapes the constraints of the painted plane, by going beyond the traditional format of the square canvas.

And then there’s Shaina McCoy, an up-and-coming female artist who does these really textural paintings dealing with subject matter (like the black American experience) that it’s important for us to discuss more here in Asia. There are 15 artists in total — so it’s a lot of ground to cover.

Over the past several years, do you feel that the art community in Hong Kong has improved its access to members of the general public? What aspect of that relationship do you think could benefit from further work?

I’d definitely say that everything is more accessible. I think with the museums and institution-backed initiatives, such as Tai Kwun and M+, more and more people are discovering what they enjoy about the art world — and that wasn’t always the case.

Having said that, further platforms for public art installations are needed. Hong Kong is definitely one of the most important cities in the world, and I think an enhanced openness by the government to supporting the arts could better reflect that.

Here at WOAW, your avowed focus is on “fresh perspective translated for the [Asian] market” — what qualities do you look for when scouting talent embodying this description?

First and foremost, when considering any particular artist’s work, we have to be captivated by it — does it come from a ‘pure’ place? Is this individual for the culture (as opposed to someone who’s simply co-opting for their own ends)? Secondly, we often consider whether they’ve worked in Asia before, or if they’re open to that idea — enthusiasm to me is important.

Within the Hong Kong scene, do you feel that gallerists are doing enough to find and nurture local artists? Who are some homegrown talents you perceive to be deserving of a bigger audience?

It’s often the case in the music and art world that you have to be popular globally in order to prosper back home. And like numerous other places in France or the US, that’s very much the case here in Hong Kong.

But to answer your question: I think the painter Matthew Wong is definitely a Hong Kong legend (sadly, he passed away in 2019); the multimedia artist Eric So is another amazing homegrown talent; Lung Ka-sing — the list goes on. Regardless of the specific discipline these guys are operating in, it certainly feels like there’s a bigger playground for local artists to coexist in nowadays.

Moving forward, what will the dynamic be between the WOAW space in Wanchai and the new Central gallery? Will the programming in both spaces be more or less independent of one another? Or will these form part of a cohesive programme?

We’re still in the process of figuring that out — it’s an evolving discussion. But, for WOAW Wanchai, much of the experience will continue to be driven by the context and the space. The whole Sun Street enclave has a strong community vibe: where people can congregate, grab a burger and beer, and take things at a more manageable pace. That’s part of the reason why we’ve focused on curating so many editions in that location, accompanied by food and beverage experiences. Meanwhile, our new Central space is a more ‘traditional’ gallery, with premium positioning and a downtown location.

To close out — in the spirit of this month’s issue — could you describe for us, in 2021, what makes an individual in the art community ‘influential’?

Contrary to popular belief, it’s not really about the look of something — more the perspective. Influential forces in art nowadays might not even have a face: maybe it’s a mere Instagram page or some similar sort of digital presence, you know? I’ve never measured somebody’s authority in the art world based on whether they have the ‘right’ accolades: their influence has more to do with how involved they are in the culture. Are they using their voice to help others? Are they focused on nurturing fresh talent? Those are the informative questions we should be asking.