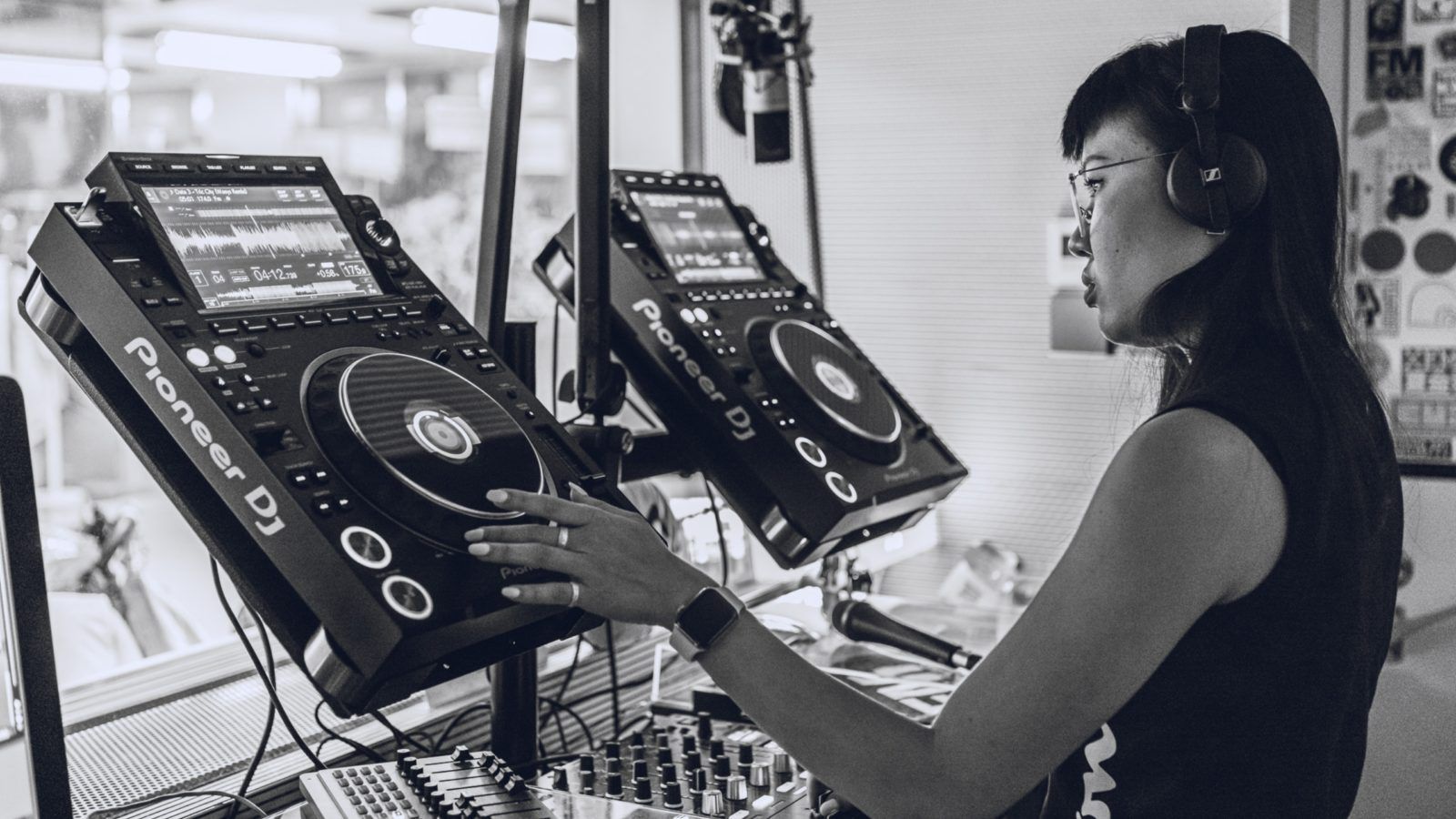 In 10 Tracks, we link up with the movers and shakers of Hong Kong’s nightlife scene to learn a bit about their background, their inspirations and their ten perfect tracks to kick off the weekend. This week, we talk to Just Bee about her hilarious start to DJing, being a party troll and the importance of catching vibes.

Just Bee is not just, well, anything.

“I’m just a professional trouble maker whose been making noise all over Hong Kong since 2016,” says Abby, with an easy laugh.

Abby had an unusual start to DJing. What began as a funny party joke (more on that below) ended up jumpstarting something crucial, something that’s led Abby to Just Bee. Something that’s then led Just Bee to spinning decks on hotel rooftops in Hong Kong, on junk boats out at sea, in dark, smoky, full-capacity clubs all across China — and FM.BELOWGROUND, Outlook Festival, Clockenflap, Social Room, Popinjays, Mihn and Quality Goods Club. Just to name a few.

It should come as no surprise, then, that Abby had a hard time answering questions in a standard interview like this. “The people I want to collaborate with are scientists, engineers. Coders,” says Abby. “Not really DJ-related.”

Much like all the proverbial hats Abby wears, from cross-country DJ to full-time student, her sound doesn’t fit neatly into any box either.

“Deep, bassy, sometimes heavy and chaotic, sometimes dreamy and happy,” lists Abby. “It’s always evolving depending on my mood or situation. I can’t stick to one sound — I love them all!”

And as always — she made a mixtape to take us into the weekend.

What sparked your interest in music? Did you play any instruments or sing growing up?

I’ve always loved music growing up. I was in the school choirs, took guitar lessons and tried my hand at piano (though it was not for me as a kid). Every day after school at 4pm I would watch MTV or Rage on TV! I also remember spending time with my uncle as a toddler who was and still is big on 70’s to 90’s pop music from Japan, European and Western countries, and my mother who would blast Madonna and Mariah Carey CDs.

I will always remember it fondly. It was my birthday party at Oma in 2015 where I invited some of my favourite bass music DJs to play throughout the night. One of them, a Japanese DJ/producer called DJ108, suggested I play a set too, as a surprise. So in the few weeks leading up to the party he taught me how to DJ. No one, not even the DJs, knew this was happening. I even put a random and fake DJ name on the event poster so no one could guess that it was me.

On the night of when it was my turn to DJ, I remember stepping into the DJ booth and even in the dark and smokiness of the club I could see people’s confused faces like “What’s going on? What is she doing back there?” I was such a troll, too, I started the set with Meghan Trainor’s “All About That Bass” and mixed it into a heavy Drum & Bass track called “Gene Labs Optiv BTK Remix” by Mindscape. It was chaotic. I’m laughing loads just thinking about that.

The set wasn’t perfect, of course, but I had so much fun that night. It felt incredible being behind the DJ booth and watch the crowd go wild. I haven’t stopped DJing since!

If you can collaborate with anyone in the world, who would it be?

I would love to work with scientists and engineers to create mind-blowing projects. Who knows?!

How did you get involved with Unchained?

I was contacted by Daniel Power, the co-founder of Unchained, in 2016 when he first started Drum & Bass nights in Shenzhen. That was the beginning of me travelling there back and forth every weekend, flying or taking the train to various places in China with the rest of the Unchained crew Lyndon Jarr and Immuno. Up until COVID-19 struck us and the border was closed-off.

What was your best DJ gig? What was the worst?

One of the best gigs I’ve had was playing the warm-up set for Drum & Bass legend Makoto at OIL Club in Shenzhen. The place was packed full of people (like 300) and the vibe was perfect. I managed to keep the people dancing and interested but not tire them out before the main act. Warm-up sets really test your skills as a DJ and I am proud of that set.

The worst was in a mega-club in the middle of nowhere in Foshan around 4 years ago. The club itself was insane, it was like a 5000sqft warehouse with LED walls and ceiling. The event was advertised as a Drum & Bass night, but not even 30 minutes into my set I was asked to stop and was replaced by a bro-step DJ. I was pretty annoyed because I felt like I had wasted my time and energy flying there. But I still got paid in full and continued to get free alcohol so I didn’t stay mad for long [laughs].

What’s a set (or a performance) that had an important, lasting impact on you as an artist?

I honestly can’t remember when, but the first time I played a set ‘freestyle’ without planning every song from start to finish. It felt like a weight had been lifted off my shoulder and I could just go with the flow instead of worrying about it being perfect. It showed me the importance of reading the crowd, catching a vibe and running with it.

The first two that come to mind are electronic music artists Gyrofield (from Hong Kong but now in UK) and LCY (from the UK) who have made huge dents with their unique music production and music/label/events.

It depends on what project I am working on. If I’m making music for my own personal enjoyment or for venting purposes, I do whatever comes to mind. If I can hear a piano melody in my head, I will record that. If I hear jingles after, I will sprinkle that on top.

For collaborations like designing sounds for videos or animations, I will first watch the visual piece all the way through, jot down first impressions or any immediate sounds I hear in my head with timestamps. Then I will re-watch it again more closely to plan out the sounds layer by layer. I usually make a first draft quickly to get the ball rolling and revisit it after a little break to build on it.

I try to be as creative as I am organised, especially if I’m working against a deadline.

Vibes, feeling, emotion… knowing how to read a crowd. Volume control when there isn’t a sound engineer to do that for you. If you are DJing great tunes but my ears are being destroyed with the volume even while wearing protective earplugs, that kills it for me.

Vengaboys [laughs). But I bet you love them, too!

I have a few things coming up next! I’m in the process of adding finishing touches to a project I’m designing the sound for, and it will be announced very soon. I can’t reveal much about it right now but all I can say is that it’s a big collaboration between myself and another talented Hong Kong artist.

Another upcoming project I’m involved in is ‘. Stillness. .Intersecting. . . 2022’, which is a special project about the quiet Hong Kong cityscape, curated by Contemporary Musiking Hong Kong.

Music Nightlife Hong Kong Musicians 10 tracks 10tracks Just Bee Unchained Recording Hong Kong DJ
You might also like ...
Culture
Tuning In: How IKA turned heartbreak into Made-in-Hong-Kong R&B heat
Culture
Tuning In: ‘Iffy Pop’ artist HeidiH would like us all to be kinder, braver, cuter
Culture
Tuning In: Afra Kane feels blessed every time she steps on stage
Culture
Tuning In: Singer-songwriter cehryl can literally do it all
Joey Wong
Editor
Retired Tumblr girl Joey has written her way through fashion trends, youth culture and luxury retail in New York and Hong Kong. Beyond internet adventures tracking down the perfect vintage find, you can probably catch her tufting rugs, swigging back Bloody Marys — her third, probably — and making fastidious spreadsheets about her Animal Crossing island.
Style Fashion Beauty Culture Hong Kong
Sign up for our newsletters to have the latest stories delivered straight to your inbox every week.