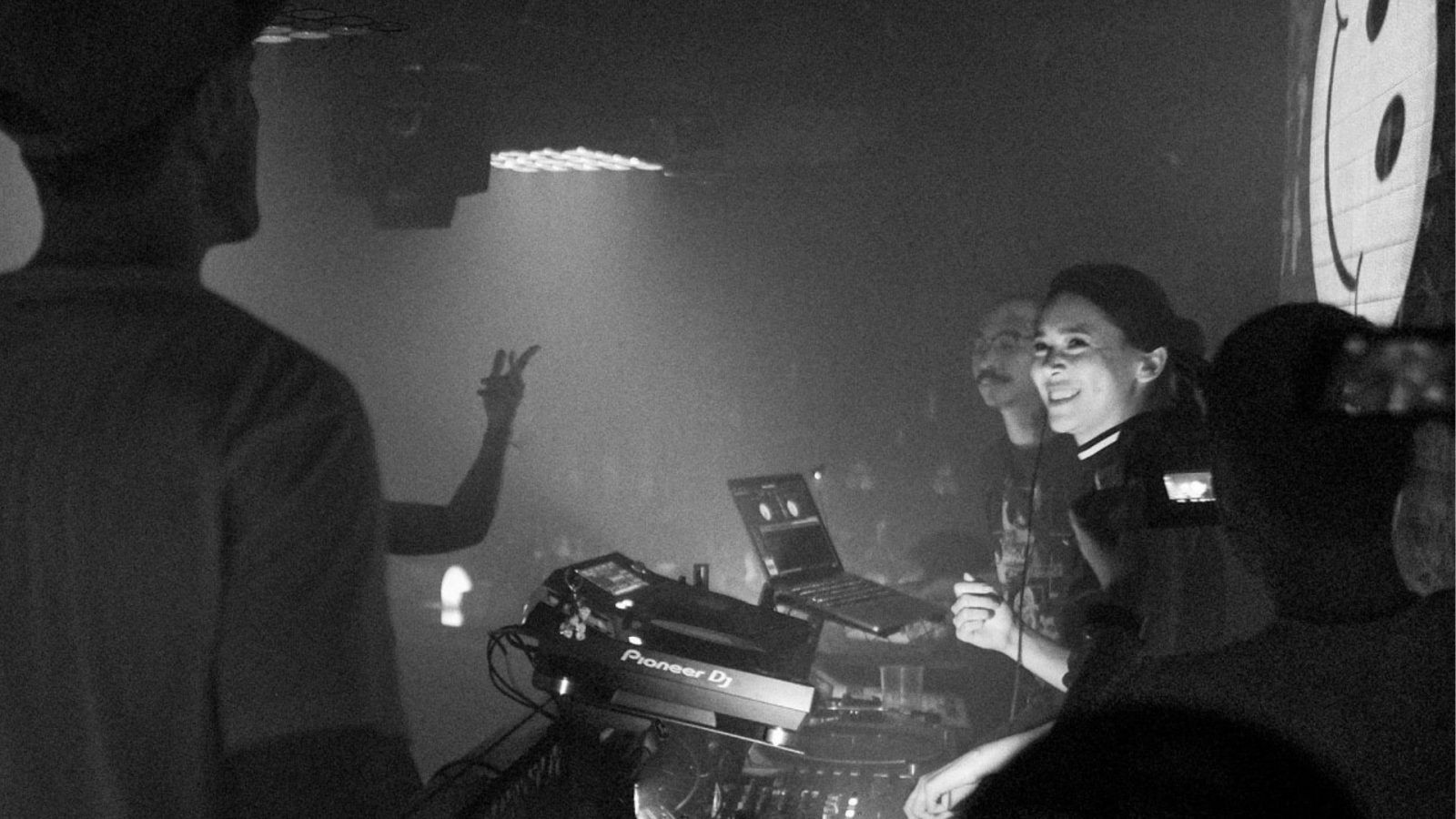 In 10 Tracks, we link up with the cool kids and OGs of nightlife, then ask them for a mixtape. This time around, we talk to Mengzy, the DJ, producer, writer and doctoral candidate (!) about her sound, the scene and “intense, all-encompassing rave energy”.

Mengzy has always been hungry for more. Long before she became one of the city’s coolest DJs and producers, she was working on her pen game, waxing poetic on the city’s best bites and sips — practice, in a way, for gigging with HK Magazine, Time Out Hong Kong and nightlife bible Mixmag Asia as its Music Culture Columnist. She even’s doing her doctoral thesis on the history of Hong Kong nightlife, from the early 1900s all the way to the rave scene.

It goes without saying, then, that this future doctor of musicology — also a radio host for RTHK and co-founder of Wonton Bass — is not exactly your average DJ. But don’t count out the 1s and 2s; they’re what transformed Li Meng de Bakker into DJ Mengzy.

“Mengzy is my childhood nickname that my family and close friends call me,” she explains. “When I was brainstorming for my DJ name at the beginning of my career, I came up with loads of whacky aliases but eventually realised the answer was staring me in the face.”

Technically, a second-generation jockey — her dad used to spin records in the late ’60s — a lifetime of geeking out over music of all kinds led her to a “bass-heavy aesthetic” and “intense, all-encompassing rave energy” style, and the proof is in any of her Wonton Bass events around the city, complete with the garage, grime and D&B sound that make it “Hong Kong’s tastiest UK bass party”.

Before Mengzy and Wonton Bass blow out their next set of subs — this Saturday, 6 August at Social Room, to be exact — we caught up with the DJ to talk inspirations, memorable gigs and her upcoming debut EP with UK label Fly By Night Recordings. And as always — she made a mixtape to take us into the weekend.

How would you describe yourself as a DJ and your sound?

As a DJ, I’d say I’m an explorer. I don’t focus or devote myself to a single genre, as some DJs do, but really enjoy surfing across styles in my sets and in my production. Having said that, I’ll admit I have a bias towards a bass-heavy aesthetic and intense, all-encompassing rave energy.

What was your first introduction to music?

I owe my love of music to my dad, who actually was a DJ briefly in the late 60s! Growing up, he exposed my brother and me to his massive collection of classical, jazz, rock and even deep house later on.

Did you play instruments or sing growing up?

Yes, I did play an instrument and sing growing up! Total music geek at school. I started learning piano at the age of 9 and did the whole exam thing all the way up to Grade 8. I was also a choir nerd and have sung in choirs on and off since primary school.

I owe a lot to my music and piano teacher, Nicki Elcome. She inspired a real passion in music education in me. Thanks to her influence, I ended up taking GCSE and A-Level music, all the way to my BA, MA and PhD.

You have a bit of a unique journey as a writer and journalist as well as a DJ. Which came first, and what lead to the other?

Being a writer came first and, come to think of it, it did indirectly lead me to become a DJ. Back in 2015, I decided to pursue an MA in music to further my abilities as a writer and musician. While I was working towards that, I picked up a book at the library about the art of sampling (Making Beats by Joseph G. Schloss), which I happened to share on my IG story. A DJ friend of mine (Yao) saw that and hit me up, inviting me to production jam session at XXX Gallery on a random Monday afternoon. That jam changed my life. I decided right there and then that I had to learn how to DJ and produce.

The writing you do also covers the scene you’re in. Has that ever been complicated?

No, it’s actually been extremely symbiotic. I love learning about other artists’ work and experiences, and being able to help them share it to more people. The only complication is that I probably take on too much and get stressed out with deadlines.

Yes! Subez Yeti booked me for her Mean Gurls Club 1st Anniversary, which was a pop-up gig at Central Ferry Pier. It was vibey and loads of friends came to support me, which meant the world. Funnily enough, my mum and aunties were also in town visiting and swung by briefly. I’m so grateful to Subez for giving me my first bookings in Hong Kong and introducing me to loads of people in the scene.

You might also like…
Culture
10 Tracks: SUBEZ YETI aka Subi, resident sweetie of the Mean Gurls Club

What was your most memorable gig? What was the worst?

There are a few contenders for most memorable but one of them was a gig I did during Art Basel week 2019 called Dreamrave at Terrible Baby in Eaton Hotel. They had built a special “capsule” inside Terrible Baby that was basically a narrow rectangular box completely lined with mirrored panels, and with a psychedelic LED display behind the DJ booth. It was a spectacular setting and the audience energy was incredible.

Worst? In this industry, probably best to keep that to myself! [laughs]

How did Wonton Bass begin?

It grew organically from a series of gigs I did at Social Room co-headlining with DJ Lovely. After a few times playing together, we brought in our friends DJ Fu and ‘Enry, and quickly realised that we had something special on our hands. We decided to put a name on it, and Wonton Bass was born.

Is there a set or performance that you’ve seen (in person or online) that had a lasting impact on you?

Absolutely. In person, I would say Mala at Sonar HK 2018. His set was so immersive and he opened with “Empire of Dirt” by Egoless — one of the most incredible tracks I’ve ever heard. That intro shook me to my core! I’ll never forget it. Online, I would have to say Sam Binga’s Boiler Room set at Bass Coast Festival. He is a multigenre wizard who brings incredible party energy to his sets — not to mention, being one of my favourite producers, as well.

Which DJs or artists in Hong Kong are inspiring you lately?

MMEE is a DJ/producer who moved here about six months ago and has quickly become part of the extended Wonton family. He and I have done quite a few B2B sets that have gone off really well! Having an artist that I vibe with musically to the level that we do has been very inspiring!

How do you find inspiration outside of music? Or alternately, what do you do to disconnect?

Outside of music, I love graphic arts. To disconnect, I’ve gotten more and more into cooking during the pandemic.

This goes for journalism and music production: write drunk, edit sober. Only joking! My most tried and trusted method is to work in stages. I’ll sit down to write the skeleton of an article or track, for example, and stop when I’ve done that — not pushing myself to finish anything in one sitting. Each time I return to that particular project, I refine it more. Eventually it ends up being finished. Otherwise, a deadline always works extremely well. [laughs]

What’s the best thing about the scene in HK? What do you feel is missing?

The best thing, I think, is that despite its relatively small size and despite the many obstacles it has faced in the past few years, the scene here continues to be propelled forward by passionate individuals and crews. We may not be a music centre like London or New York, but you can find parties and producers hustling in pretty much any genre under the sun.

Wonton Bass has a monthly residency at Social Room, so I do encourage anyone who enjoys or is curious about UK bass to check it out! As for myself, my debut EP is on its way via Fly By Night Recordings, so keep your ears peeled for that!

Keep up with DJ Mengzy on Instagram and Spotify, and check out Wonton Bass each month at Social Room.