Home > Culture > Music > Tuning In: Luna Is A Bep on the origins of her name and rapping in Cantonese 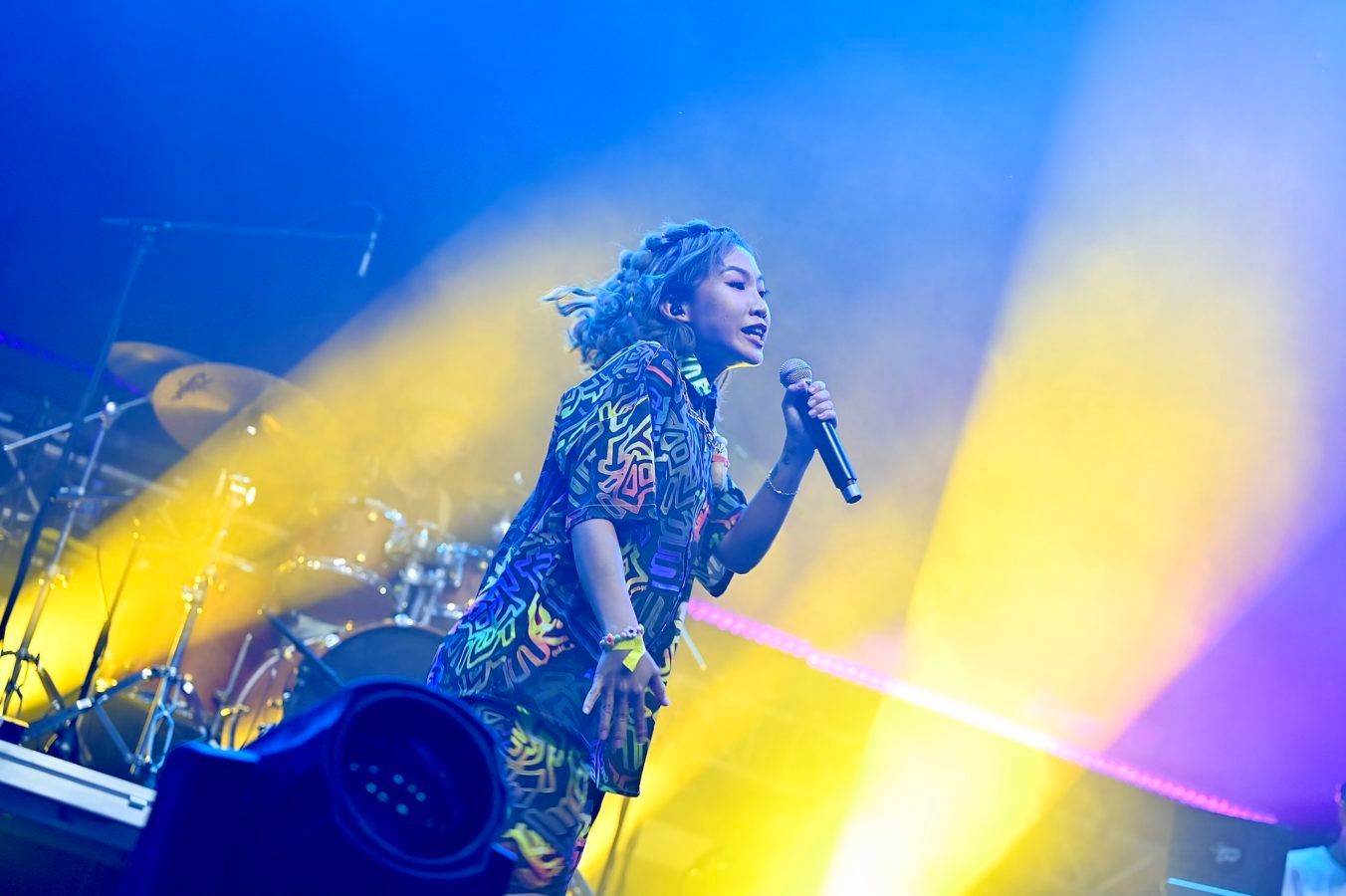 Tuning In: Luna Is A Bep on the origins of her name and rapping in Cantonese

Culture
Tuning In: Luna Is A Bep on the origins of her name and rapping in Cantonese
Share this article
Next article

Bep bep! Make way for homegrown artist Luna Is A Bep. Debuting in 2018, the Hong Kong-born and raised rapper is known for her Cantonese-language tracks addressing local issues and cultural phenomenons specific to the city. Four years later, she is fast on her way to becoming a household name — if she isn’t one already. She talks to Lifestyle Asia about the origins of her moniker, her creative process and what music means for her.

Growing up without musical parents, and then studying Chinese Literature at university, Luna Is A Bep never thought she’d one day make a living as a rapper. But somehow, along the way, she began writing music and has now found herself as an established artist in the Hong Kong independent music scene.

A quick scroll through Luna’s profile reveals her bubbly personality, expressed through her brightly coloured, Y2K-inspired fashion sense and graphic designs. With more than 40k monthly listeners on Spotify and over 20k followers on Instagram, as well as popular tunes like “overthinking”, “25” and “麻系甩”, Luna Is A Bep is a celebrity in her own right.

Tuning In: Luna Is A Bep

You may also like…
Culture
13 rising Hong Kong female musicians to add to your playlist in 2022
Culture
Tuning In: Lester Chong on his new album “ZiNG!” and loving My Chemical Romance

What’s the meaning behind the name Luna Is A Bep?

Well, I’m Luna. As for the latter part, when I first started out, my ex encouraged me to write music and told me I needed a stage name. He suggested “Luna is a Bitch”, but I felt it was too vulgar and not really me. So I said, “let’s just make it Luna is a Beep”. Except I spelt “Beep” wrong, as “Bep”, and it’s just been like that since. It really has no meaning.

I actually have no background in music. I studied Chinese Literature at university so even that is completely unrelated to what I do now. But I did dance a lot, which exposed me to different types of rhythms and grooves. And when I graduated, I met my ex, who was into hip-hop and knew I liked writing, so he suggested I start experimenting with writing rap.

I began searching “type beats” on Youtube, writing whatever came to mind, and eventually met some local producers and even started producing my own beats.

No, not really — I would even say my family has terrible music taste. My dad listens to music from the Mainland and my mum plays the same two CDs over and over again, usually this ’80s singer called Sandy Lam. No — what really got me into music was the internet. Back in the day, I had no idea that there were music genres and I would just ask my friends to send me whatever English songs they listened to. I remember bobbing along to a lot of Usher.

I don’t think there was ever a moment where I went “ding!” in my head. Actually, I still don’t think I’m particularly talented. But maybe because I studied Chinese Literature, I’ve always felt like I had a connection with Cantonese characters. Sometimes a melody pops into my head and immediately, I’m able to match it with certain Cantonese words. It’s something that not many people can do.

I’ve only lived in Hong Kong, but thanks to the internet, I got to listen to a lot of music genres growing up. I’m also a dancer, so naturally I’m drawn to twerk, reggae, dance hall — you name it. When I make music, these influences all come out subconsciously.

If it’s not “有隻雀仔跌落水” (a popular children’s song in Hong Kong) then I guess it would be “明愛暗戀補習社” by Twins. I first heard it when I was a teenager — this was before the internet became common in households — and I remember it was being played on TV day and night, brainwashing all of us.

Each of my songs has a different vibe, but my current favourite is my newest, “overthinking”.

“What’s Up” by 4 Non Blondes. It talks about the singers who feel like they should have it all figured out at 25 years old, but they don’t. Being lost is something a lot of us can resonate with. When I’m frustrated I listen to this song and it immediately calms me down.

My favourite artist is always changing, but recently I’ve been really into Doja Cat. She’s not just a pretty face, she actually knows how to produce. Before she got her big break, she was constantly developing her own skills and would put out one or two songs per month on Soundcloud. Her creativity really stands out in her album Planet Her, where all her tracks have different sounds and styles.

Music is my redemption. I didn’t have a happy childhood and my teenage years weren’t really memorable, so when I turned 22 and started making music, it really helped me find myself. At the time, all my classmates at university wanted to become teachers after graduating, but I knew it wasn’t for me. When I found music, everything became clear. I might not be super skillful and my music might not be showstopping, but I love what I do and I feel passionate about it. To put it simply — even if one day I can’t make music anymore, I still cannot not listen to music.

I make sure to jot down notes when I encounter anything interesting. Sometimes a melody will pop into my head and I’ll record it down. Or maybe I’ll have an experience, like meeting a cute guy and it will inspire me. The biggest no-no is sitting down and trying to create — it’s not something you can force.

After I have an idea, I go online, find a suitable type beat and start writing. When the writing’s done, I rearrange my own type beat. Some of my musician friends can write with no background music, but it’s not something I can do. I need some sort of rhythm to get me going.

I take deep breaths before a show to calm my nerves. So, breathing is my ritual? Post-show I go for a good smoke.

The eternal artist’s struggle is to find a balance between artistry, audience and life. I don’t think I’ve overcome it yet; I’m still struggling with it. I want to make music for a living, but I know I can’t rely on it because it doesn’t provide a stable income — at least not right now. I have to find a way to get by while doing what I love.

I grew up very shy with a lot of self-esteem issues and absolutely hated mirrors ’cause I had acne. When I first started singing, you can sort of hear this reservedness in my music. Even if I was alone in the room, I would sing very quietly into the mic, scared that somehow, someone would be able to hear me. I just couldn’t let go.

But over the years, I’ve grown more confident. Now I experiment with different genres and if something I make doesn’t sound good, then I will think of ways to improve it rather than give up. Music is a learning curve for me.

Later on this year, I’ll be releasing my album with 13 tracks in total. But before that, in July, I’ll be teasing another single with lo-fi, r&b vibes. Stay tuned.

(Lead and featured photos courtesy of Luna Is A Bep)

Hong Kong Music tuning in Hong Kong Musicians #lsatuningin lsatuningin hong kong music Luna is a Bep
You might also like ...
Culture
Tuning In: TXMIYAMA on dark R&B vibes and finding his singing voice
Culture
Tuning In: Dessy is your friendly, neighbourhood R&B loverboy
Culture
Tuning In: The Low Mays on vulgarity, honesty and their unique sense of humour
Culture
Tuning In: How IKA turned heartbreak into Made-in-Hong-Kong R&B heat
Charmaine Ng
Editor
Charmaine enjoys eating steamed broccoli and knocking back cups of spearmint tea, all in the name of health. Covering art, beauty and music :)
Sign up for our newsletters to have the latest stories delivered straight to your inbox every week.