Home > Culture > Music > Tuning In: The Low Mays on vulgarity, honesty and their unique sense of humour 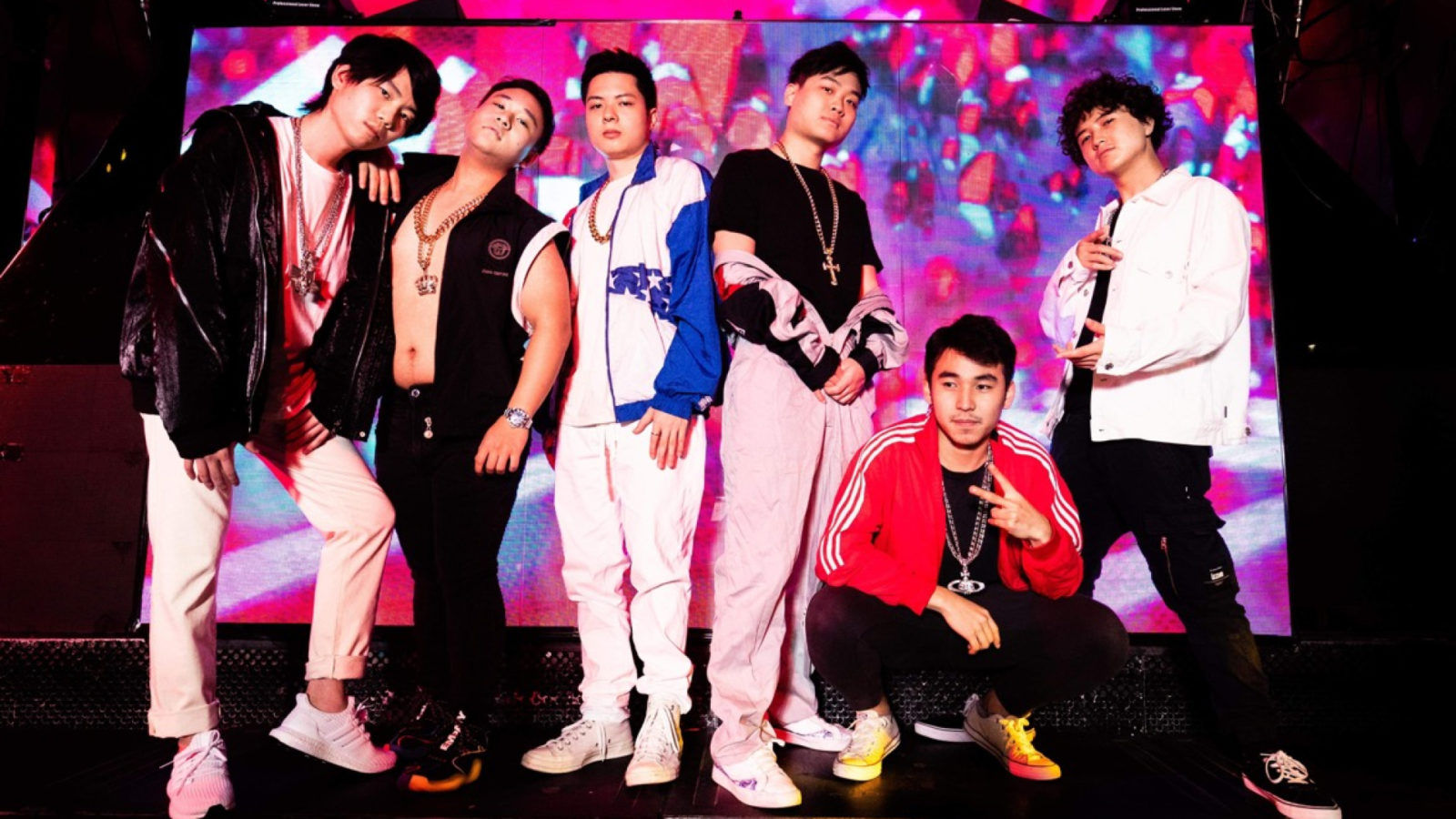 Tuning In: The Low Mays on vulgarity, honesty and their unique sense of humour

Culture
Tuning In: The Low Mays on vulgarity, honesty and their unique sense of humour
Share this article
Next article

The Low Mays are makers of certified hood classics, but they’re far more than just “rappers”. Their insightful minds, yearning for unrestricted creativity, are disguised under a veil of satire and an odd sense of humour, resulting in a vulgar exterior that is not for the faint of heart. If you are willing to look past it, however, you will come to appreciate their adept manipulation of the real and the surreal. Welcome to The Low Mays experience.

There is something about The Low Mays’ discographic universe that is so humorous, even while carrying the burdens of real life — taking up the characterisation of “Fulham Billionaires”, “20-year-old Original Gangsters” and “Life Winners”, members Healthy Lin, Butcher Fong, Matty Gospel, Nile Bun, Bumblebee Yung and Lil Hanwo bash the city’s Broke Asses from a billionaire’s point of view, shedding light on the ridicule of Hong Kong’s wealth disparity.

Mean-spirited? Maybe a little — but not unfounded. Believe it or not, life’s many vulgarities do find their home in the decadent corners of Hong Kong — our innate judgmentalism is never at peace with anyone: the rich, the poor, the privileged, the less fortunate, the young, the old — The Low Mays just decides to write down what we’re afraid to say out loud and layer a trap beat beneath it.

That’s on keeping it real. But as the Billionaires famously said, “the real is kinda hard to understand sometimes”. A sprinkle of fiction, or rather, surrealism is a crucial part of the mix. Enter a local emblem of the grittier side of Hong Kong: triads. Picture a typical triad film from the dawn of the last century — the romanticised, almost fantastical portrayal of gangsters rocking tailored suits and slicked back hair, counting dollar bills in a high-rise office building by day; and caught in the storm of a Mong Kok street fight, dented metal pipe in hand, by night.

This is the scene The Low Mays paint so vividly through their raw, uncensored narrative in the 2018 album Life Winners and its 2021 sequel Life Winners 2: Popstar Life — a demonstration of masterful lyrical work and clever utilisation of the nonliterary nature of Cantonese.

Reckless honesty, colloquial language and not an ounce of care in the world — except when it comes to spreading awareness of afflictions like Ligma. Sounds like the epitome of MK (short for Mong Kok) culture, which is precisely where The Low Mays’ heart belongs.

In essence, what would you say The Low Mays represents?

Friendship and family. Speaking your mind, not giving a fuck, no matter how bad things can get.

Three words to describe your style.

Authentic – Always keeping it real.
Surreal – Because the real is kinda hard to understand sometimes.
MK – We like Mong Kok.

Why “Fulham Billionaires”? Where did this characterisation come from?

Because we had lunch with Jay-Z.

Out of all genres, why rap?

We’re not “rappers”, the same way Mozart wasn’t a rapper. Our style certainly has a lot of hip-hop influence but in recent years we have ventured into pop, rock, R&B, opera and other genres as well.

Can you name some of your biggest inspirations (can be artists, culture, or particular songs)? How do they shape The Low Mays we know today?

The early 2010s Chicago drill music scene, especially Chief Keef. He was this shy, awkward, traumatised 15-year-old who just didn’t care about anything anyone thought about him and made the most aggressively ignorant music known to planet Earth at that time. His music videos were shot in his home with his friends as he was on house arrest. It made us realise anything was possible, as long as you kept that raw energy.

Also, the late rock ‘n’ roll legend GG Allin (rest in peace). We wish our live shows can be half as inspiring as his were.

What do you think sets you apart from the rest of the industry? What is it like to be a completely independent group? Would it have been easier or
harder otherwise?

The Low Mays is all about creating certified hood classics. The music industry is for the TV screens, the Low Mays is for the streets. Being independent gives us total control over our artistic direction and progression, and we don’t owe anyone anything. We can choose to make any music, shoot any video, design any clothes or merch. And yeah, we own all our master recordings.

Your first mixtape, Dragon City Drug Manor, came out in 2015. Thinking back, would you have done anything differently?

Absolutely not. Okay, maybe the recording setup was horrible and the mixing and mastering were non-existent. You can hear all sorts of background noises like coins clinking and the engineer laughing, but it’s a certified hood classic at this point.

Was it a conscious decision to be vulgar and controversial from day one? If so, any backlash or regrets?

Our music simply reflects the realities of humanity, the streets and society. Life is vulgar, art is vulgar. Just walk outside and take a look. Keeping things clean and “harmonious” on the surface is the most dishonest and vulgar thing to do.

Was there ever a moment you’re like “that’s too much, even by our standard”?

No, never. If anything we always want to push the boundaries as much as possible.

Behind the veil of vulgarity and profanity, what message do you want to convey with your music?

Stop thinking too much. It’s scientifically proven that people with a lower IQ live longer and are considered more attractive by the opposite sex. People can take whatever they want to take away from our music, if it means something to you, then it means something. We don’t care about preaching.

Based on your lyrics and penchant for darker themes (sex, drugs, violence, etc.), some may disregard your music and the message behind it. What do you wish you could say to these people ?

They should get themselves checked for Ligma, we lost too many of our friends from the streets to it. Keep Ligma off the streets.

On the subject of prejudice — turns out you all went to good schools and colleges. Care to elaborate? Any takes on whether education has to do with how one carries oneself?

Yeah, we did learn a lot from the Sugon[d]ese University of Commerce and Finance. That’s where we met Jay-Z for lunch. He taught us how to be real entrepreneurs. Please invest in our Avengers Mahjong NFT collection.

What do your parents think of your music? Has their attitude changed over the years?

They had varied reactions, but after a few years they’ve grown to accept that we’d become a cultural force with serious momentum, inspiring all these dumb ass kids to make worse life decisions. And have fun.

Flashback warning: Tell me about the moment you knew you were becoming viral.

The first song of ours that went viral was “Dragon City Drug Manor” in 2016. We shot the music video with a cracked iPhone 5 in a Japanese park on a trip to Tokyo, because we got bored waiting for our turn at a ramen shop. So yeah, we didn’t really have any expectations. It just felt very surreal. It was crazy that there were actually so many people who understood our odd sense of humour and dickhead energy.

Does fame or stardom mean anything to you? Would you have continued working on music if you weren’t as popular as you are today?

No, sure it feels great being successful, but it doesn’t mean anything at the end of the day. We make music for ourselves, and that won’t change regardless of how many people listen to us.

Tell me about your most memorable gig (for good or bad reasons).

We did a show in 2018 where our audio system failed five songs in, and we had to stop the show and wait for 15 minutes until it was fixed. The audience started booing us and was screaming for refunds the whole time. The PA guy had a nervous breakdown and DJ walked out of the venue in rage. We had to basically improvise a stand up routine while one of us tried playing the songs from our Macbook. The rest of the show went great though.

We had plenty of great shows after that, especially Clockenflap, TEDFlex and MacPherson stadium.

Walk me through your creative process: how do you make a track from start to finish?

We write in our spare time, both as a group and individually, about anything we want. If some lyrics show potential, we refine them more and decide on the theme and musical feel of the song. Then we toy around with our cache of beats, or hit up producers for an instrumental. Then, we play Avengers Mahjong and procrastinate for a few weeks doing nothing before actually recording and finalising the song.

Out of your entire discography, do you have an all-time favourite song? Why?

How do you stay creative/inspired?

We spend way more time hanging out with each other than actually making music, which keeps our minds refreshed and inspired, before we lock into the creative process. The Low Mays [is] all about family.

We play a lot of Avengers Mahjong, which is scientifically proven to increase brain activity.

What is Avengers Mahjong?

The single greatest business opportunity in modern history, patent pending. Kids don’t like to play Mahjong because it looks boring, sounds boring, and their parents love it. You know what it needs? Avengers. Infinity stones. Coming to you soon at $800 a set. Please invest in our Avengers Mahjong NFT collection.

Any songs you’re listening to on loop recently? Any cool artists you want to shout out?

As the Godfathers of Cantonese rap, what do you want to say to your English-speaking audience in Hong Kong?

Hong Kong Hip Hop tuning in Hong Kong Musicians lsatuningin hong kong music the low mays
You might also like ...
Culture
Tuning In: JM Inot of ARKM and Hybrid Stereo keeps the beat of Hong Kong alive
Culture
10 Tracks: DJ Daryll Griggs, Faye music director and Hong Kong nightlife OG
Culture
10 Tracks: M.N.G., aka Mr Nice Guy, Hong Kong recording artist and DJ
Culture
Tuning In: ‘Iffy Pop’ artist HeidiH would like us all to be kinder, braver, cuter
Michelle Chan
Hotel living enthusiast who is into anything remotely goth. Listening to Army of Lovers and HIM with noise-cancelling headphones in the streets of Wan Chai, juice in hand. Email me anything interesting!
Sign up for our newsletters to have the latest stories delivered straight to your inbox every week.